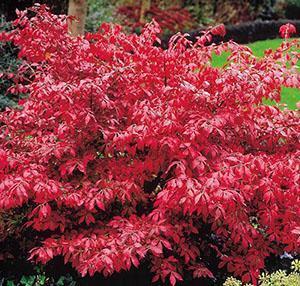 Evergreen and deciduous plants, united in the genus Euonymus, are euonymus familiar to many Russians and residents of other countries of the world. Shrubs and small trees do not produce edible fruits. Moreover, all their green parts contain compounds dangerous for humans and other mammals, so plants can be potentially dangerous..

But many of the two hundred species are actively cultivated by humans. What is the reason for the popularity of culture, and where can it be found?

Features of the euonymus bush

The genus of euonymus is extensive and diverse. Among the plants there are large, reaching a height of 9 meters, and tiny 15-centimeter specimens. Some of the shrubs shed their foliage with the onset of autumn, and some varieties still carry the leaves under the snow. At the same time, all representatives of the genus are perennial ornamental plants, many of which have found application in landscaping squares, parks, gardens and summer cottages, and some even interested in indoor crops lovers.

The main decoration of the euonymus is unusually bright foliage and original fruits, which have no equal in any other genus or family.. 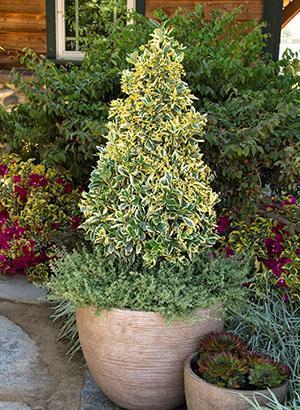 All euonymus shrubs, no matter what species they belong to, have a superficial root system. Roots diverging in different directions from the stem help the plant to strengthen and receive nutrition on the slopes of ravines, in the undergrowth under large trees on a variety of soils.

The depth of the rhizomes largely depends on the type and density of the soil. Unlike many cultures, which feel uncomfortable with the proximity of groundwater or, conversely, excessive dryness of the substrate, euonymus have learned to adapt, which became the key to their amazing unpretentiousness and vitality.

Branches and leaves of euonymus

The aboveground part of the spindle tree is lignified and still young shoots of different years. On adult branches, in addition to gray, brownish or almost black bark, in some species cork growths of various shapes and intensities can be seen.. 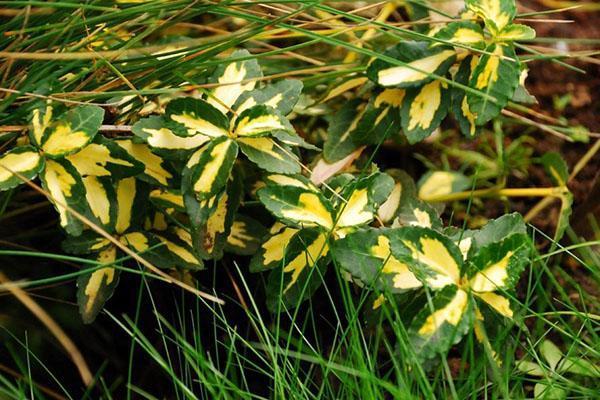 Shoots are covered with smooth, dense leaves, in most cases with serrated edges and located opposite each other. The size of euonymus leaves varies depending on the variety and lifestyle of the plant.. 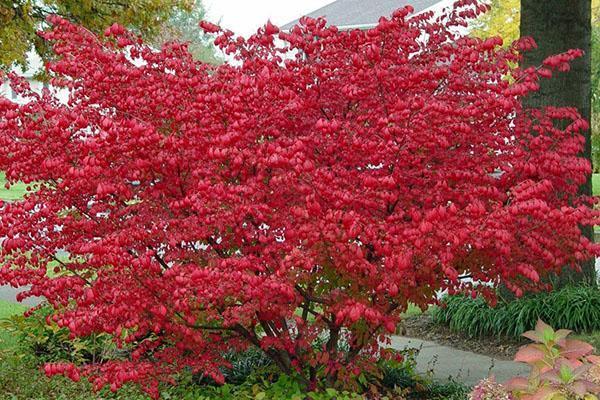 In deciduous species, the foliage is noticeably larger, and it becomes especially attractive at a time when other plants on the site lose their decorative effect. The summer, green color is replaced by all shades of pink, bronze, purple or crimson.

Evergreen euonymus are distinguished by small, more often rounded or oval foliage, which also becomes reddish, purple or burgundy by winter, but does not fall off.

Among these plants there are many varieties and varieties with variegated leaves, on which the traditional green color is combined with silver, yellow or white tones..

Flowers and fruits of euonymus

Leaves are not the only decoration of the euonymus shrub. If many ornamental plants attract attention with their flowering, then this is not about representatives of the genus Euonymus.. 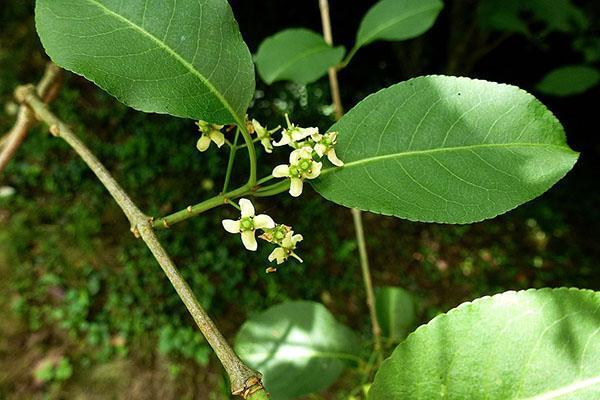 Flowers near euonymus, wherever they grow, are small, inconspicuous and have an unpleasant odor. Corollas, opening from May to June, not exceeding 1–1.5 cm in diameter, consist of 4–5 petals, the same number of small stamens and a pistil. Flowers are either single or collected in loose inflorescences of 3-12 pieces. The main pollinators of the plant are all kinds of small insects, attracted by a specific “aroma” and feeding on the mucus secreted by the flower.. 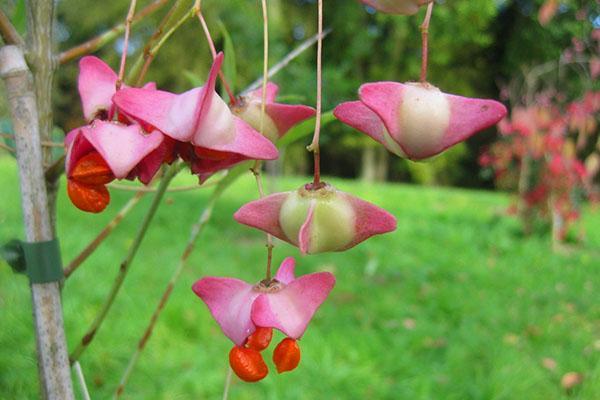 After pollination, in place of a whitish, greenish or brown corolla, a capsule fruit is formed. By August or September, the seeds inside it ripen. And the euonymus fruit, hanging from a branch on a thin long stalk, is painted in the brightest colors from white, yellow and pink to deep burgundy. The structure and color of euonymus bolls are unique.

None of the genus has such a variety of fruits, which, moreover, open up, showing the world dense colored seedlings with seeds attached to the inside of the leathery “cover”. 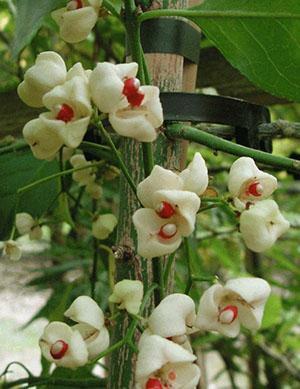 Black, reddish or brown seeds of euonymus are partially or completely hidden in the thickness of red, orange or carmine seed plants. And that, in turn, hangs from the inside of the opened fruit. This intricate design is intended to draw attention to the seeds of birds that eat bright, berry-like seedlings and carry seeds far and wide.. 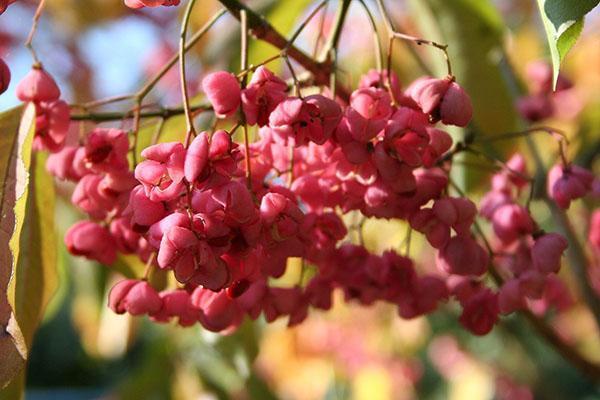 But it is dangerous for people to feast on the catchy fruits of euonymus.

Due to the high content of alkaloids, when ingested, the sweetish, with an unpleasant aftertaste pulp can cause serious poisoning with all accompanying symptoms, including seizures, loss of consciousness and heart failure..

Where does euonymus grow?

Reading the description of various types of euonymus, one might think that this is a native of the tropics, with their unusual rich flora. But this is not the case. You can find representatives of the genus euonymus in a nearby birch grove or in the undergrowth of a pine forest.. 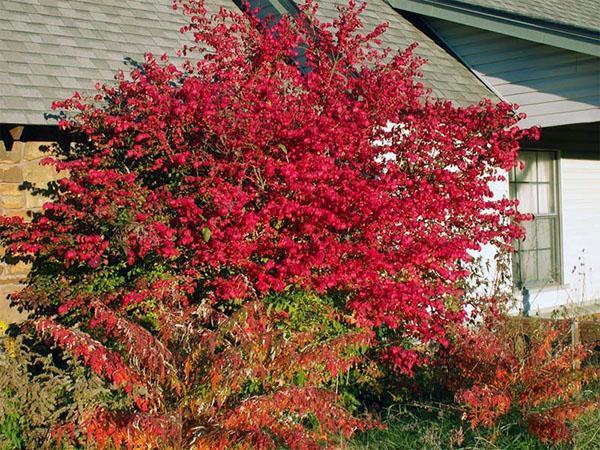 About 20 varieties of this plant are indigenous to the middle lane in our country and in Europe. But this is only a small part of the species diversity. Of almost two hundred species, the vast majority have chosen the Asian regions for permanent residence. In China alone, 50 species have been found that do not grow anywhere else in the world. There are a lot of wild spindle tree bushes in the Russian Far East, Sakhalin, Japan and the Korean Peninsula. Some of the species are from the Himalayas, their unique plants are on the North American continent and in Australia. 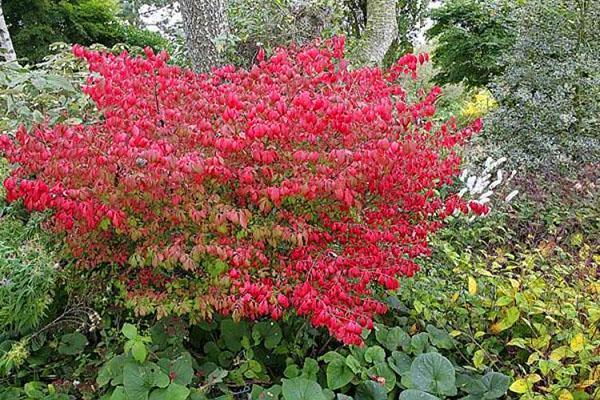 Unpretentious, easily adapting to growing conditions, frost-resistant euonymus shrubs most often inhabit the lower layer of deciduous or coniferous forests, they can grow on inconveniences, former clearings and along ravines. It is interesting that some European euonymus and Asian species turned out to be so tenacious and persistent that when they got to America, they began to displace the local flora from their usual habitat. If it were not for the slow growth of the culture, its reproduction would turn into a serious problem..

The use of euonymus in landscape design 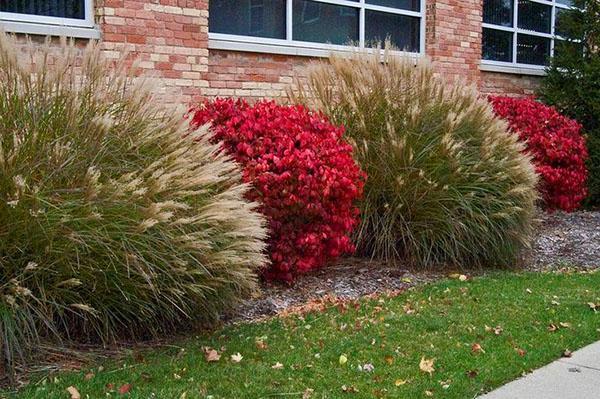 For several centuries that euonymus has been used by humans, the plant has earned many names and nicknames. In the Russian hinterland, bushes with elegant fruits are called divine eyes, wolf earrings or ash trees. But in the west, near the euonymus bush, there are other names – the burning bush, the spindle and the strawberry bush..

With all the difference in comparisons and images, they were caused by one thing – the unusual appearance of the leaves of the euonymus and its fruits. The euonymus became an unburned bush because of the resemblance of a red-orange crown with tongues of flame in the wind. Moreover, the plant has been recognized as a symbol of the Presbyterian Church in Ireland for over 200 years. Residents of Canada and the USA, where euonymus have been growing since the time of the first settlers, are respectful to him..

The unusually bright foliage and fruits of the euonymus pushed people to use this perennial culture in landscaping..

Due to the slow growth of shoots, decorativeness and unpretentiousness, plants of this genus are used to create hedges and borders. 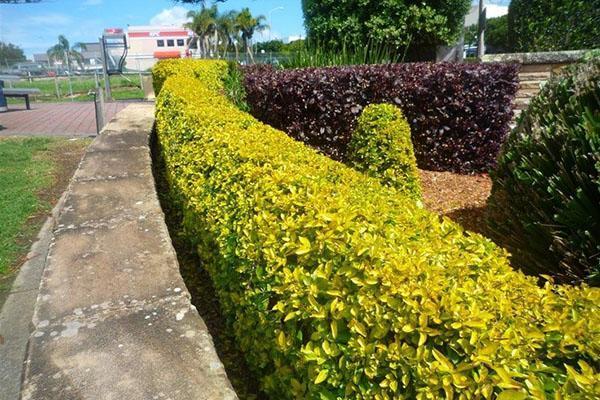 Spindle trees of large shrub forms are ideal for:

Such plants are easy to shape and can be turned into graceful trees..

Evergreen forms are a real find for gardeners who want to achieve year-round attractiveness of the site.. 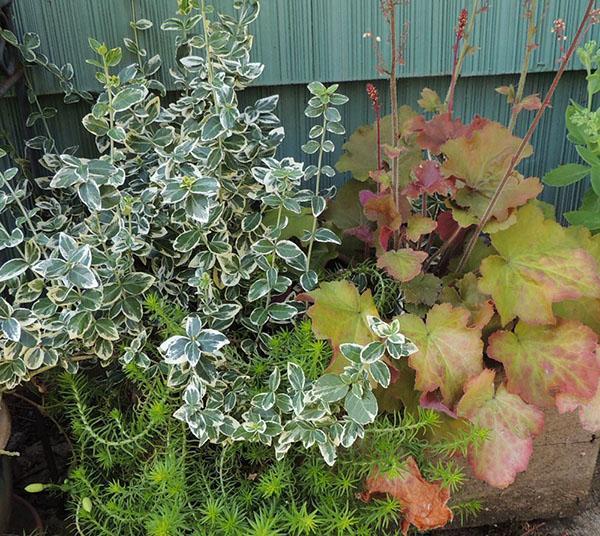 In addition to the fact that the leaves of euonymus remain on the shoots, dwarf, small-leaved and ground cover varieties have been bred, which provide the broadest opportunities for the implementation of any ideas in landscape design.