Meet the elegant views of the snowberry 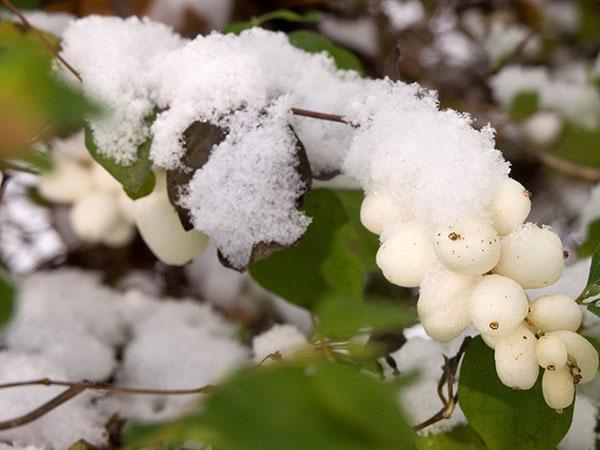 When it comes to ornamental shrubs, climbing roses, jasmine, lilac or viburnum come to mind. All of them delight us with lush decoration in the warm season, but the elegant types of snowberry remain irresistible until the onset of cold weather. This shrub withstands a drop in temperature, and the berries do not deteriorate even under a thick layer of snow. It rightfully deserves the title of the most cold-resistant plant.. 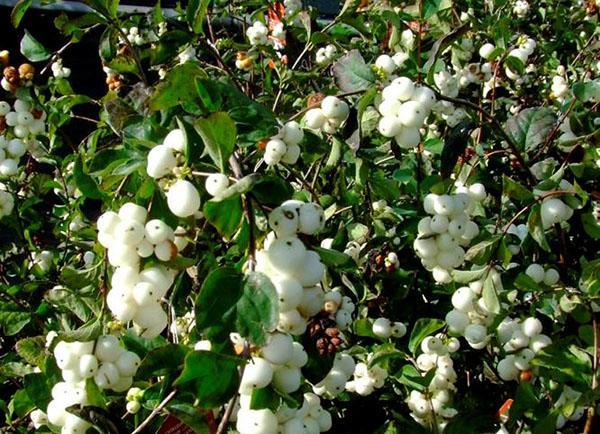 The shrub got its name for a unique scattering of white berries on curved branches covered with small green foliage. There are so many fruits that from the side it seems as if the plant fell under a sudden snowfall. Although not all types of snowberry have white fruits, the name is firmly entrenched for this spectacular shrub.. 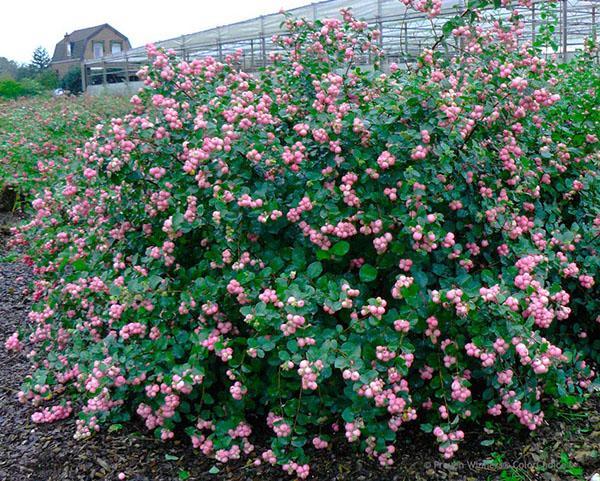 In its natural environment, the plant was found in Central and North America. It belongs to the Honeysuckle family. The snowberry wonderfully takes root in the urban area and tolerates air pollution. He is content with the meager amount of moisture coming from heaven to irrigate the earth. But falling into the hands of experienced gardeners, the plant is completely transformed, taking its pride of place in landscape design.

The berries of the plant contain a poisonous substance, so you should look out so that no one eats them during the ripening period. This is especially true for children.. 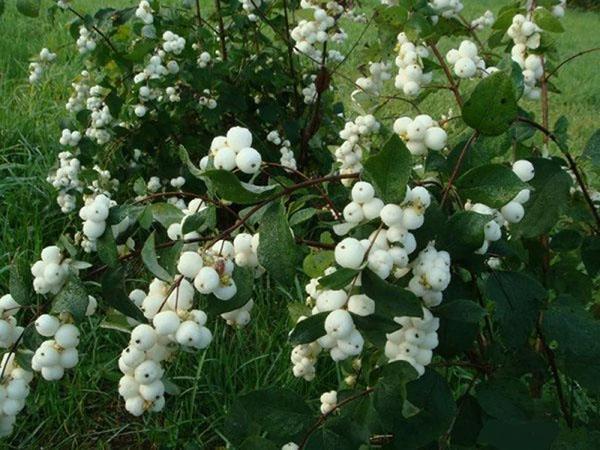 Today, about 15 different species of this spectacular shrub are cultivated. Each of them has its own characteristics. They are of different heights. And the berries are not only snow-white, but also of such shades: 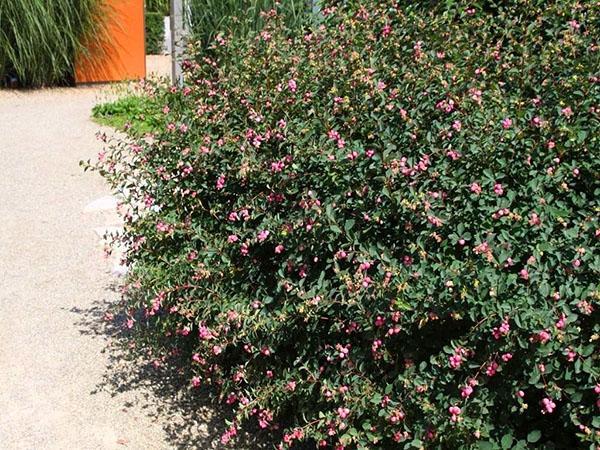 When making a description of the snowberry, it is worth noting that this shrub can be of different heights. Some specimens only grow up to 20 cm, while others reach 3 m. A truly extraordinary plant. Its curved, flexible shoots are crowned with rounded foliage, which is held on a short petiole. In July or August, racemose inflorescences appear among the lush greenery. Each of them has up to 15 pieces of buds, colored red, pink or white-green. 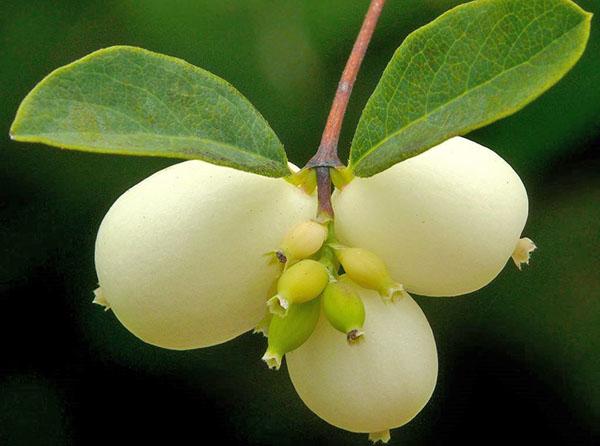 After successful pollination, juicy fruits are formed in place of flowers. They are ellipsoidal or spherical. Inside the berries are oval seeds. In all types of snowberry, the pulp of the fruit resembles granular flakes of snow, glistening in sunlight. No matter how delicious they are, you shouldn’t taste them. The consequences can be too serious, not only for children, but also for adults..

Despite the poisonousness of the plant, it is still considered an excellent honey plant. Therefore, in order to attract insects to the garden, this particular shrub can be grown.. 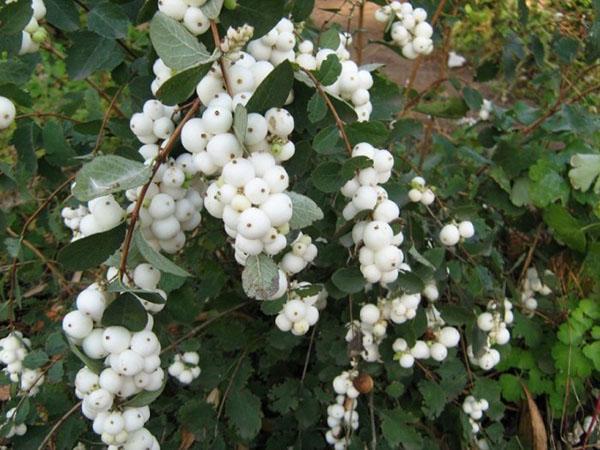 Consider a detailed description of the white snowberry, which is considered the most resistant shrub of all species of this plant. In its natural environment, it grows in the following areas: 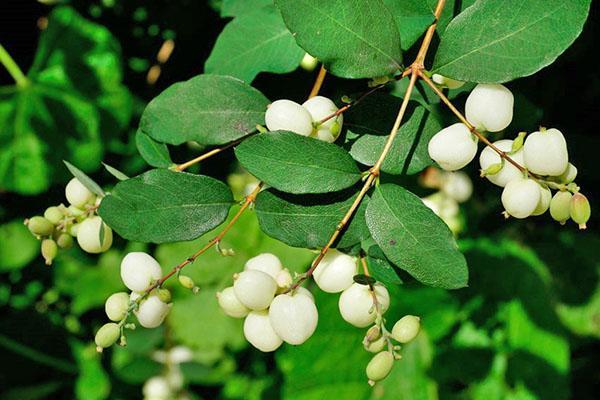 Snowberry white grows up to about 150 cm. It has a beautiful rounded crown, which is formed from flexible and thin shoots. They are covered with green foliage. Along the entire length of the shoot, racemose inflorescences are located, consisting of miniature light pink buds. Therefore, the plant has another name – carpal snowberry. Over time, juicy berries appear in their place in the form of balls, which remain on the branches until next spring. The fruits serve as food for wintering birds such as hazel grouses, pheasants and tits..

The delights of the common snowberry 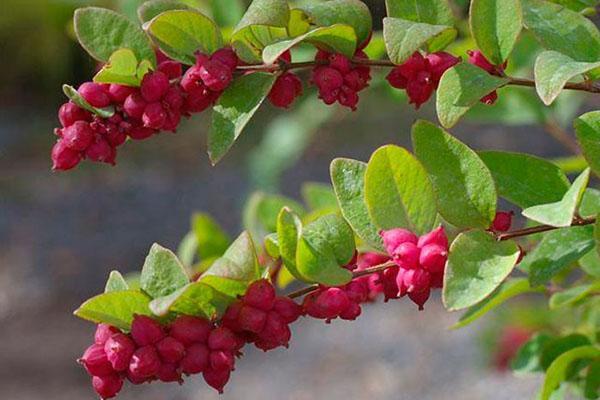 For the first time, this type of shrub was found in the meadows of North America. It is characterized by thin curving shoots that form an exquisite hemispherical crown. The outer side of the foliage of the common snowberry is colored dark green. And the back has a grayish tint, which gives the plant a glamorous look. During lush flowering, the shrub “dresses” in an outfit of rosebuds. Therefore, it is often called the snowberry pink.. 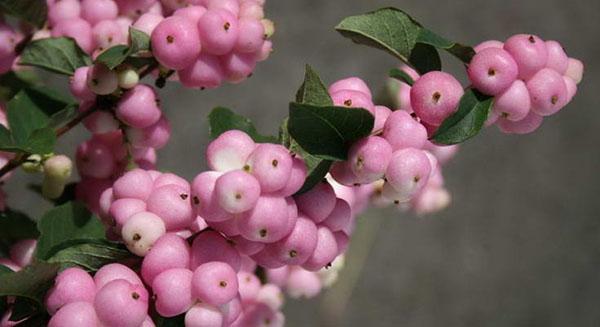 The plant looks especially impressive when fruits of pink, coral or purple color appear on it in the fall. Gardeners note the most common varieties of ordinary snowberry:

The decorativeness of the shrub is given by the reddening foliage in the autumn period. Therefore, it is widely used for landscaping household plots or in city parks.. 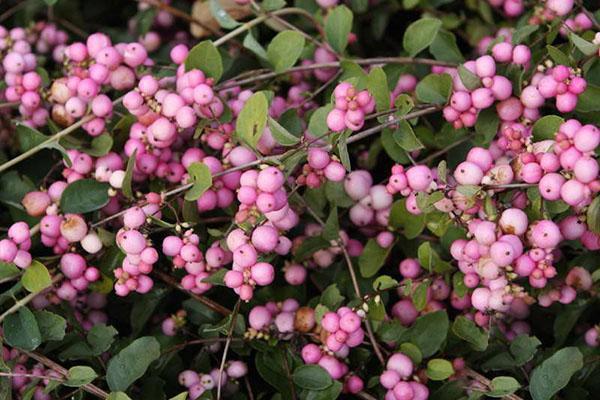 This species got its name in honor of a Dutch breeder who bred a number of such shrubs. Today, there are several subspecies of the dorenboz snowberry:

Each subspecies is distinguished by its compact size, spreading crown and high fertility.. 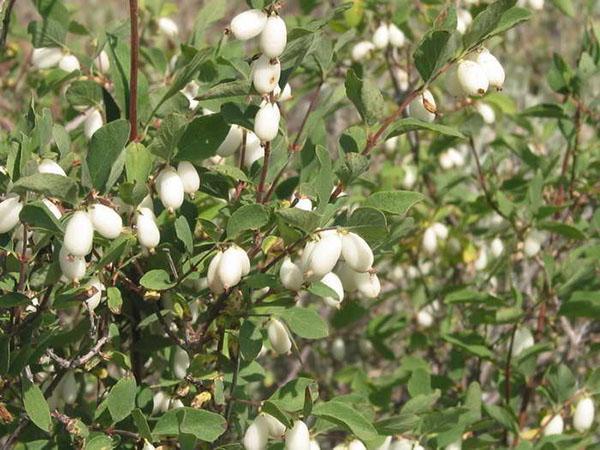 The mountain-loving snowberry in its natural environment grows in the vastness of the western part of North America. Despite this, it is also grown in the middle latitudes. It grows up to 150 cm in height and is abundantly covered with elliptical, fleecy leaves. During the flowering period, the shrub is decorated with bells of pink or white color. Later, spherical white fruits are formed from them. Their main feature is two seeds inside each berry, which contributes to the successful reproduction of the plant..

This type of snowberry has an average level of frost resistance. Therefore, in the northern regions, it should not be grown in a summer cottage.. 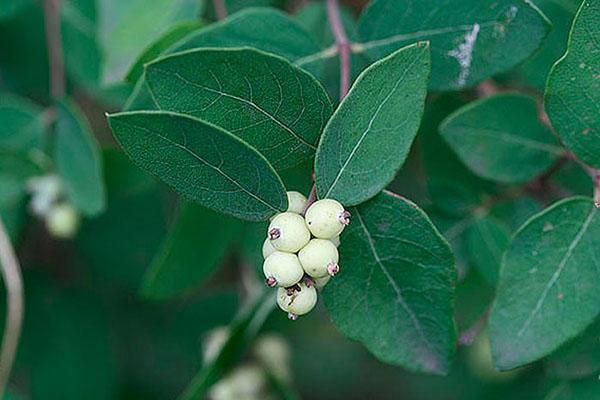 As the name suggests, some might think that the shrub grows only in a certain area. In fact, the western snowberry is also found in other areas of America. In its natural environment, it forms dense thickets on mountain slopes or near natural reservoirs.

The plant is characterized by pale green foliage, which is covered with thick pile on the back. In mid-summer (July), the shrub begins to bloom with dense racemose inflorescences. They consist of delicate white or pinkish buds. Soon, soft spherical fruits of the same color as the buds are formed in their place..

Chenot Hancock is not just a fancy name 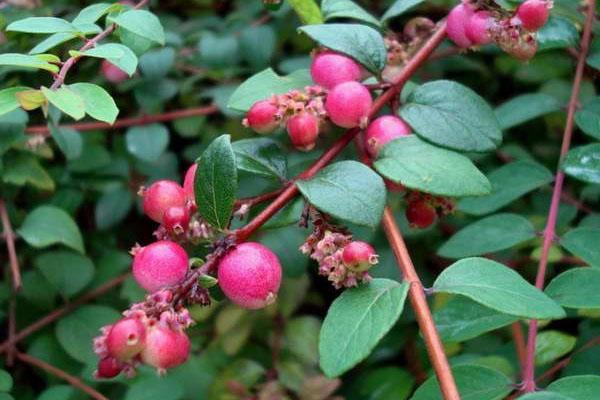 This type of shrub was bred by combining two species, ordinary and small-leaved. The result is the Chenot Hancock snowberry, which has the following features:

The plant is considered thermophilic, therefore it is cultivated only in areas with a temperate climate..

All about the snowberry – video