Rules for growing Volzhanka shrubs in the garden 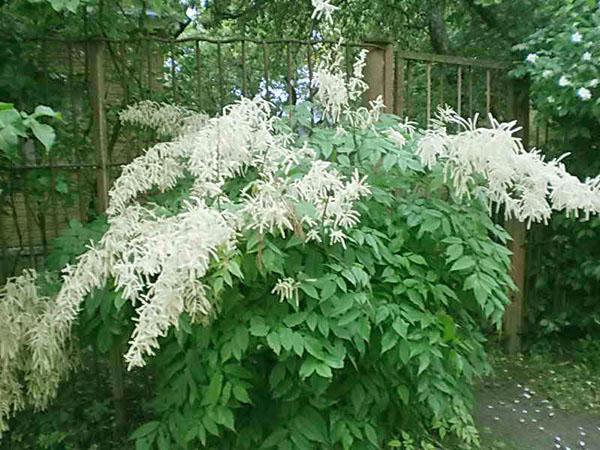 Recently, the perennial Volzhanka is increasingly used in landscape design due to the unusual shape of the leaves, high decorativeness of inflorescences, exuding a delicate sweet aroma. Growing a Volzhanka shrub will not cause much trouble to the owner, because the culture is very unpretentious to the quality of the soil, illumination, it is easily restored after mechanical damage to the trunk. The varieties of shrubs, the intricacies of planting and caring for a plant will be discussed in this publication. 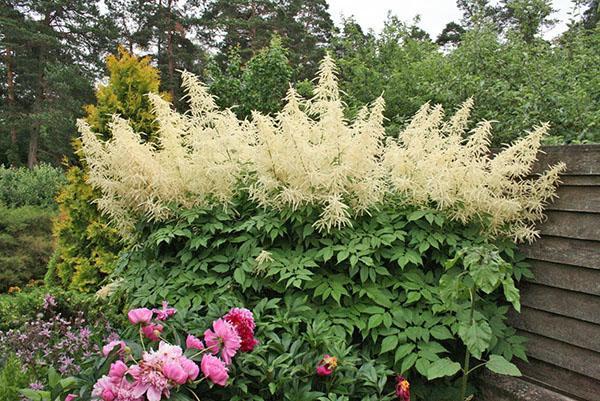 Volzhanka (from Latin Aruncus) is a perennial, a representative of the dicotyledonous class of the Rosaceae family. The plant owes its name to the shape of an inflorescence – a panicle, which has a certain visual resemblance to a goat’s beard..

Despite the similar name, the Gozloborodnik plant is not a relative of Aruncus.

In nature, culture grows in temperate climatic zones on the banks of streams, in forest belts, ravines. Volzhanka can also be found in the gorges of the mountainous area.

Aruncus is a herb with a stem modified into a powerful underground rhizome:

Aruncus is a dioecious plant: male and female flowers are found on different plants. Pollination occurs by pollinating insects, which are attracted by the honey aroma exuding the flowers.. 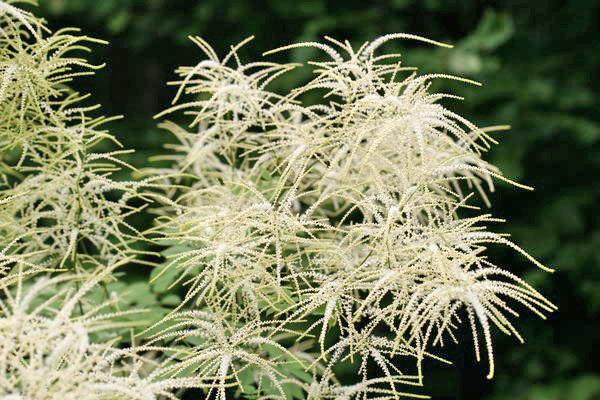 In nature, about 12 species of aruncus are known, but no more than five are used in landscape design.. 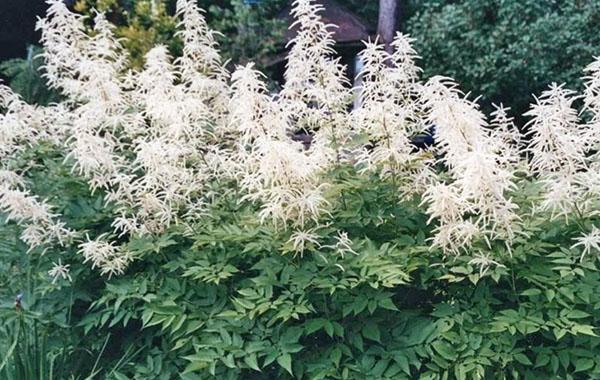 Ornamental shrub up to 2 m high. Leaves are hard, overweight. Small white flowers, collected in paniculate inflorescences, reaching a length of 40 cm. Flowering begins in early summer and lasts 30 days. Asiatic aruncus has a high cold hardiness and is suitable for growing in northern regions. There are undersized varieties of this species up to 100 cm high. 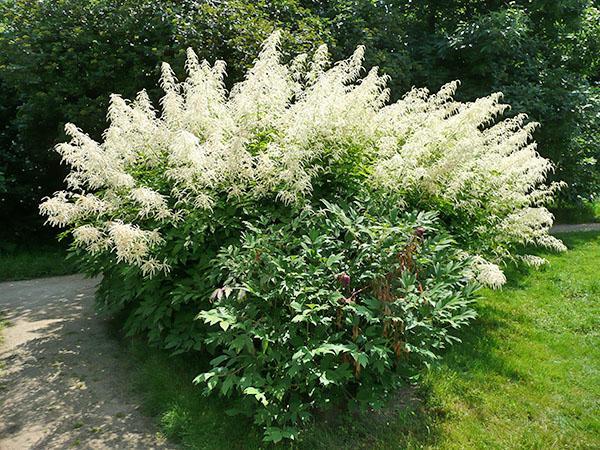 Sprawling bush, up to 2.5 m high. Compound overweight leaves. The length of the inflorescences reaches 50 cm. Male inflorescences are denser than female ones. Flowering time lasts up to 40 days.

The most common varieties used in landscape design: 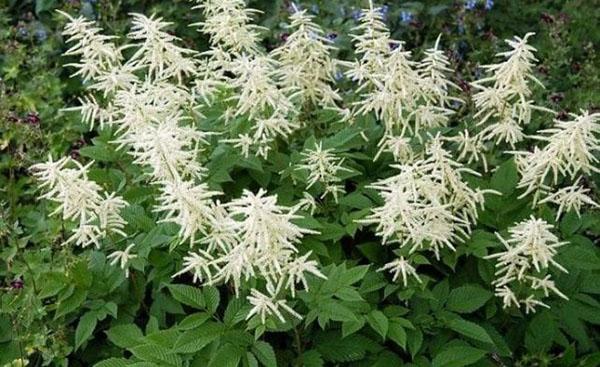 The bush is up to 1.5 m high.The peculiarity of this species is the more delicate foliage and the relatively small size of the inflorescences (up to 20 cm). 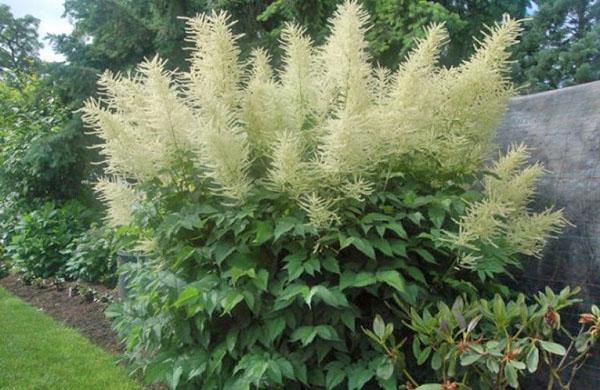 Chinese Volzhanka is a shrub up to 1.5 m high.Inflorescences of white and cream color up to 30 cm long. A distinctive feature of the plant is over-mature, brownish-green leaves. 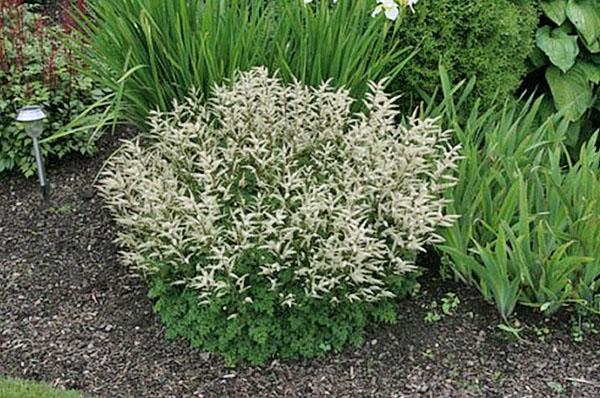 There is a miniature variety of Asiatic Volzhanka. The average height of the shrub is 20-30 cm. 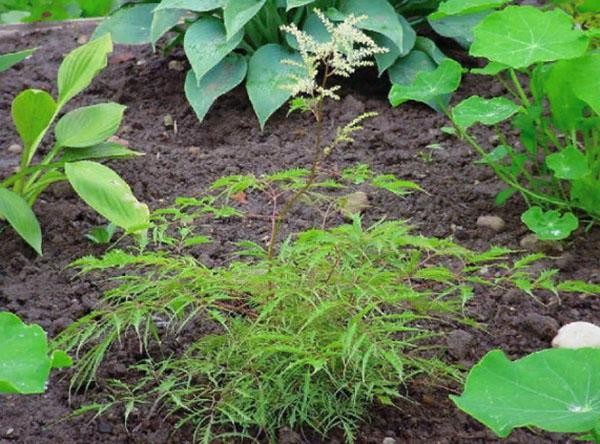 Seeds are sown in the fall in boxes filled with prepared moist soil. To prevent drying out, the planting site should be mulched. After germination, the seedlings are planted in open ground at a distance of 15 cm from each other..

Planting and caring for an undersized Volzhanka requires knowledge of certain nuances:

Caring for dwarf varieties of aruncus consists in periodic weeding, loosening the soil and watering the plant. After flowering, dried shoots and flowers are cut. 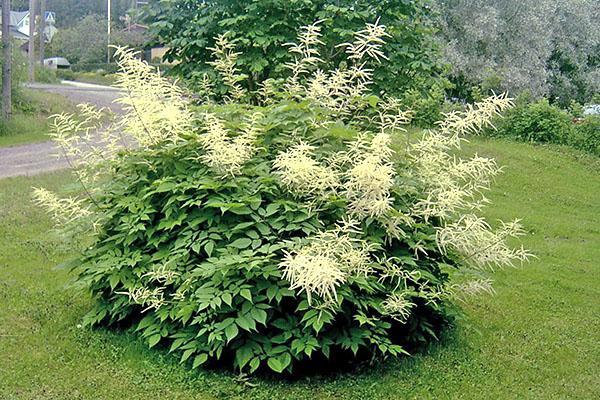 It is quite simple to grow Volzhanka plants, because the culture does not impose special requirements on soil and lighting. Aruncus grows on heavy, medium and light soils with an acidity of 5.0 – 7.0 PH. Direct sunlight can leave significant burns on the leaves, which can lead to disease or death of the plant. A characteristic feature of Volzhanka is a large leaf mass, as a result of which the plant quickly loses moisture. In the summer, the culture needs regular root watering..

Volzhanka is responsive to organic feeding:

In autumn, the bushes must be cut “on a stump” and mulched with sawdust, peat, humus, covered with agrofibre. 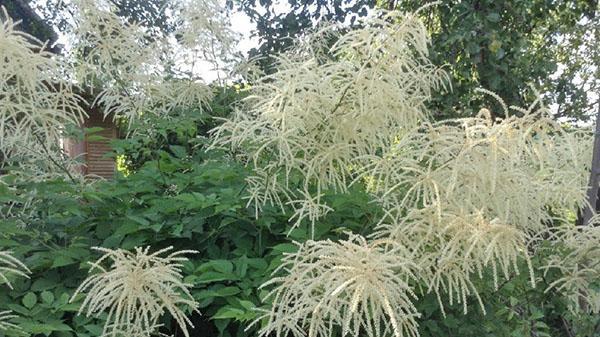 Despite the fact that Volzhanka is considered a strong plant with strong immunity, during the cultivation process, the gardener may encounter damage to the crop by pests, such as:

As a prophylaxis against damage to crops by pests, you can use the method of spraying with soapy water. This must be done before the start of the growing season. If pests are found not on the stems and foliage, the plant should be immediately treated with specialized insecticides.

Throughout the growing season, aruncus does not lose its decorative properties. The main task of the Volzhanka is to hide unsightly areas of the landscape, fences, hedges or create a background for other plants.. 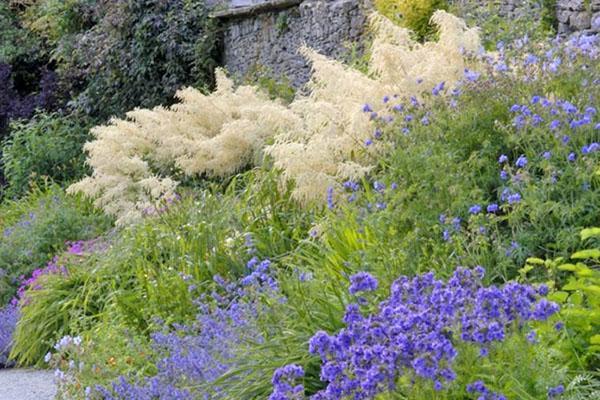 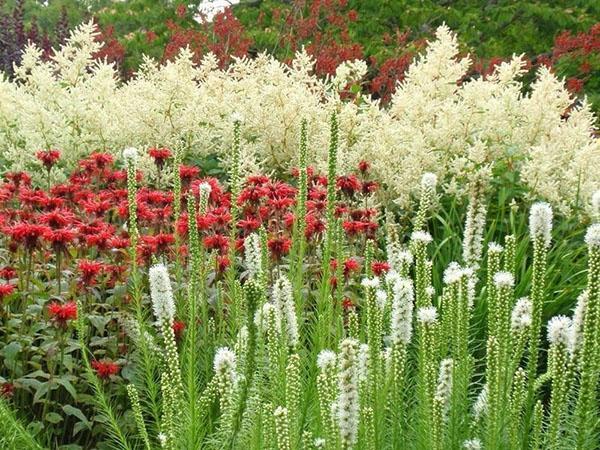 Planting Volzhanka as a background.

Nevertheless, Volzhanka looks great, both in solo plantings and in group plantings, where the culture can perform in the center of the flower arrangement.. 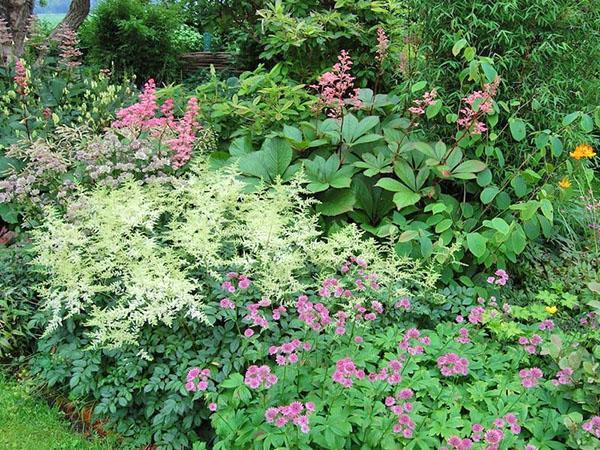 Dwarf Volzhanka in a group planting. 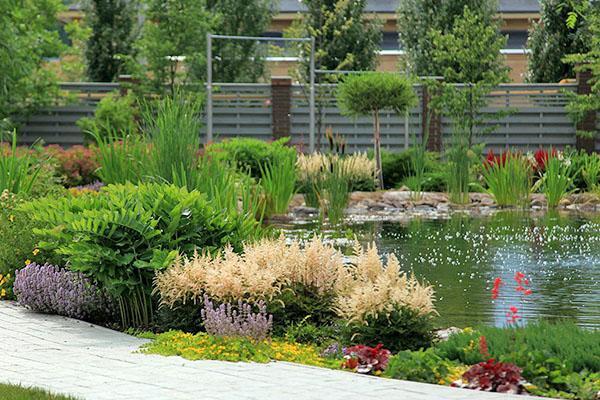 Volzhanka in a group planting of a pond decor.

Aruncus prefers shady corners of the garden. That is why shade-loving plants are planted as “companions” in creating flower arrangements:

Below is one of the options for creating a flower bed with the participation of the common volzhanka dioecious. 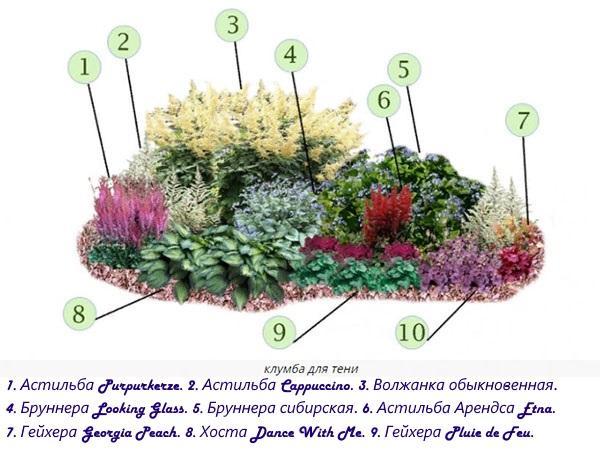 Arunkus perfectly complements compositions in the style of “ethno” and “country”, perfectly combined with logs, stones and garden elements. 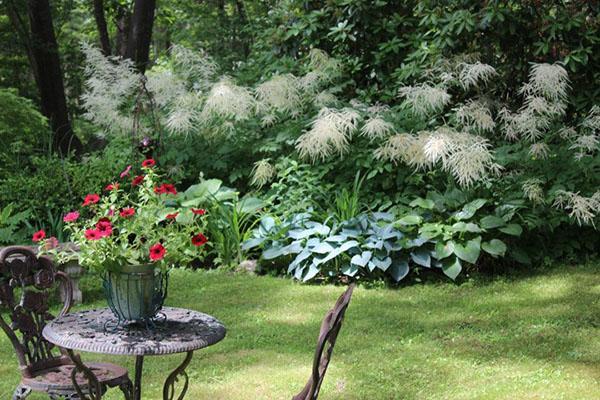 Planting and caring for Volzhanka flowers will not require much work from the gardener. The culture is not demanding on the soil, it multiplies easily and grows quickly, goes well with other plants and looks great in solo compositions.

Unpretentious volzhanka in the garden – video