Fortune’s eonymus is a luxurious decoration of the summer garden 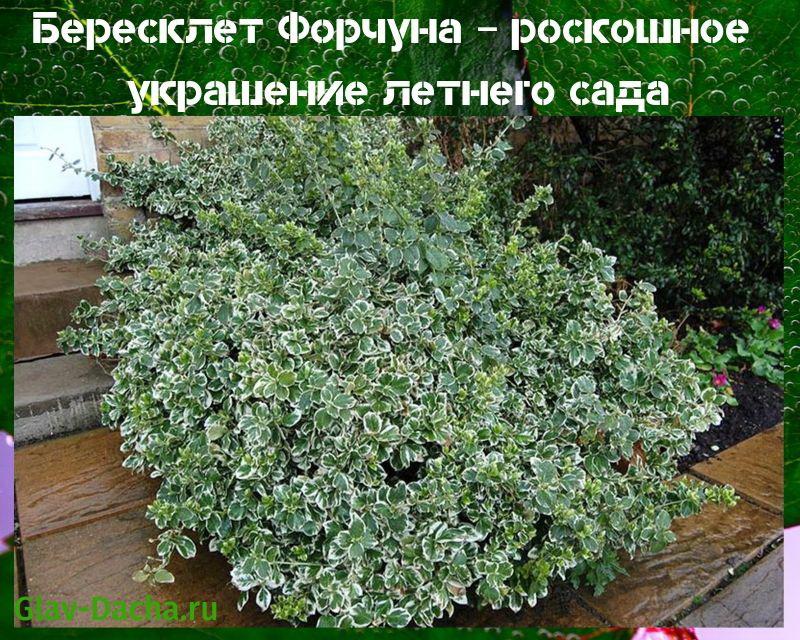 In the flower beds, you can increasingly find such a picturesque culture as Fortune’s euonymus. He is able to decorate any local area, personal plot. The advantages of this unpretentious plant are that it fascinates with its decorativeness throughout the season, especially in autumn, when the garden takes on dull tones. During this period, the creeping shrub, with its graceful appearance, makes the garden area stylish.. 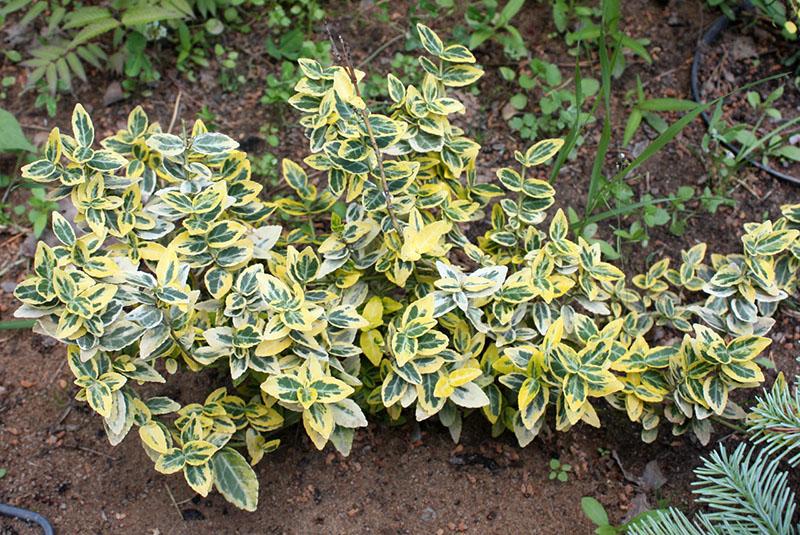 Euonymus is a low woody plant with tetrahedral or rounded shoots. Its height varies from 5 to 15 m. The plant is decorated with smooth glossy leaves, which are oppositely located on the stem. They have a dark green tint regardless of the season..

The bush is characterized by an attractive mosaic crown, which is especially noticeable when exposed to direct light. The racemose inflorescences consist of small, inconspicuous flowers of a pale green or brown color. Fruits are dry capsules containing 4 compartments, equipped with thorns or lionfish. Inside are seeds covered with fleshy tissue. They have different shades in different species..

Among the popular varieties of Fortune euonymus, which have earned praise from experienced gardeners. 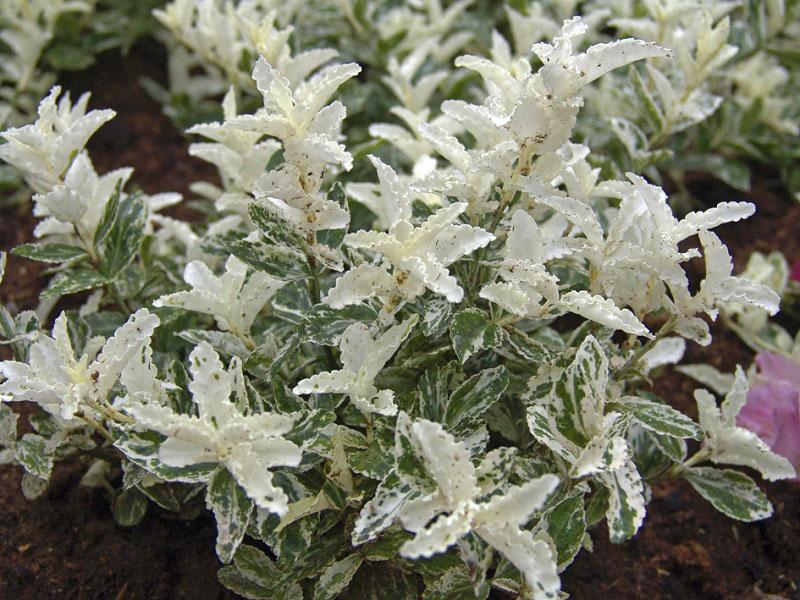 Eonymus Fortune Harlequin is an evergreen plant with an interesting color and small size. White-green colors – the key to the showiness and originality of the variety.

This species can grow in the shade and in the sun, does not require frequent feeding and watering. 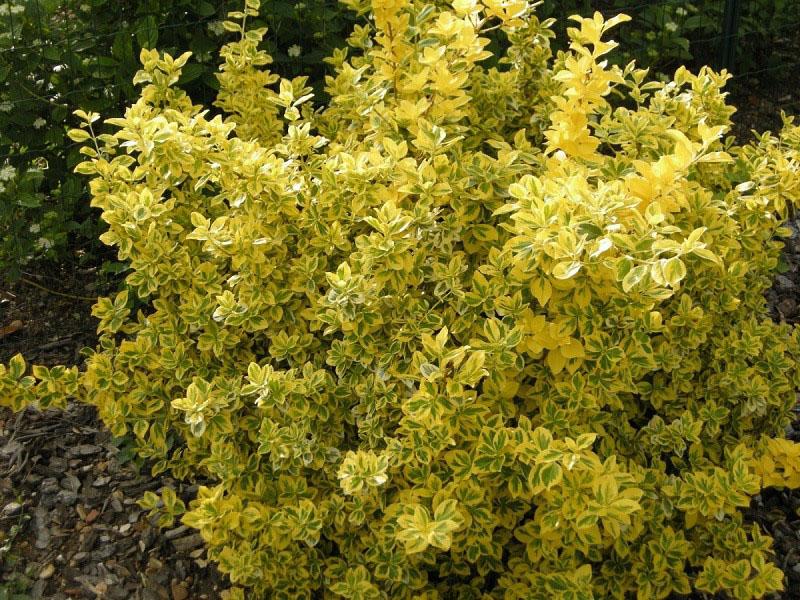 The most popular type of Fortune spindle tree, due to its original appearance. The variety is characterized by a golden color of the edges of neat oval leaves. The bush spreads easily over a vertical surface, but it grows no more than 50 cm in height. 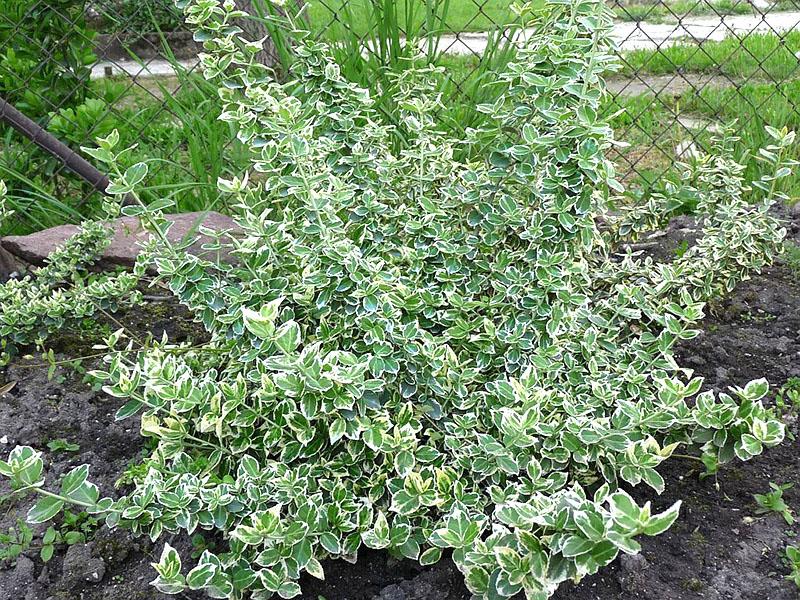 The bush has an attractive round crown, glossy leaves have a white border. The plant reaches a height of 50-60 cm.

Euonymus fortune Emerald Haiti is winter-hardy and undemanding to care for, grows well even in the northern regions. 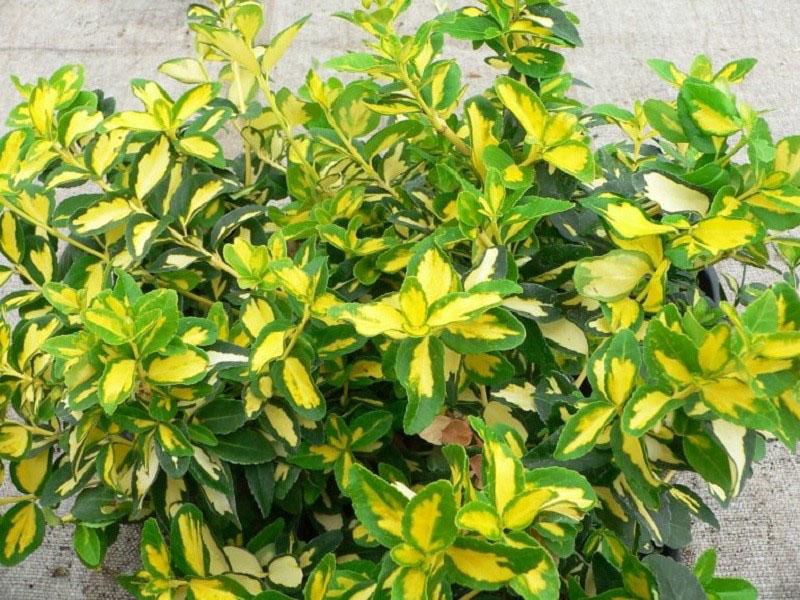 An attractive variety that fills the garden with golden hues. The height of the shrub is slightly more than 20 cm.The lush crown, covered with dark green foliage with yellow spots in the center, attracts attention. 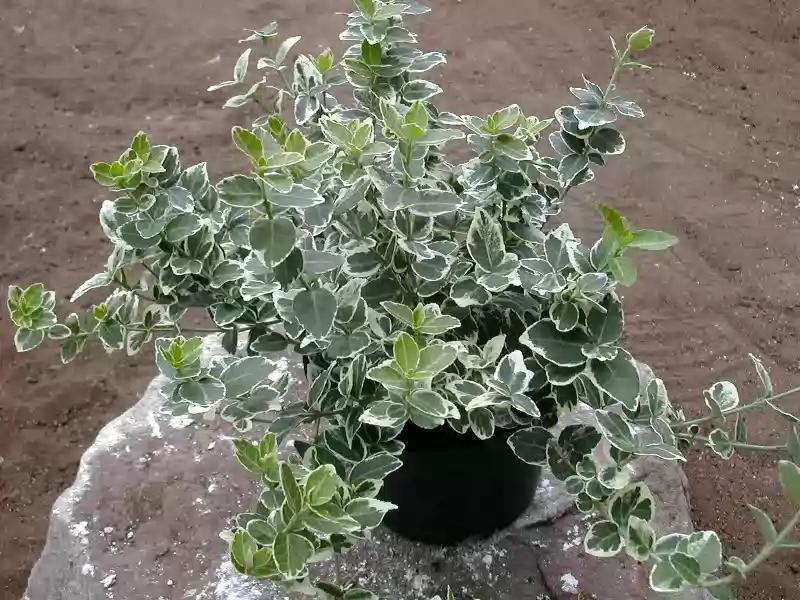 The plant prefers fertile, light, moderately moist soil. Feels good in a place protected from the sun and cold wind, in partial shade. In direct sunlight, foliage dries up and loses its decorative effect.

It is recommended to plan planting work in mid-April or early May, landing in the fall is also allowed. 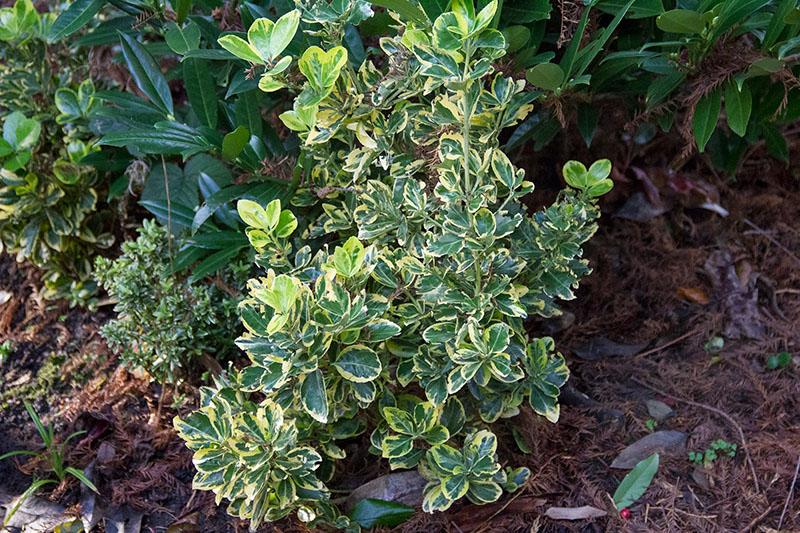 The cultivation of Fortune’s euonymus provides for a well-executed landing, which includes the following actions:

In order for an evergreen shrub to attract attention with its decorative effect, you need to surround it with care, correctly performing all the care measures. 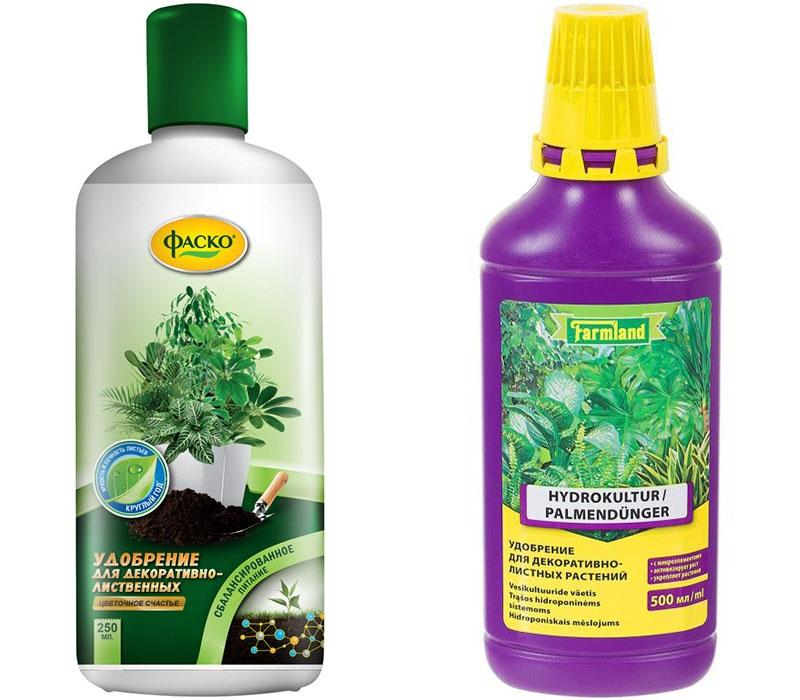 Forchuna’s euonymus is responsive to root dressings, which will serve as special fertilizers for decorative deciduous crops. To improve the structure of the soil and reduce the growth of weeds, add a layer of mulch from compost, sawdust, peat. 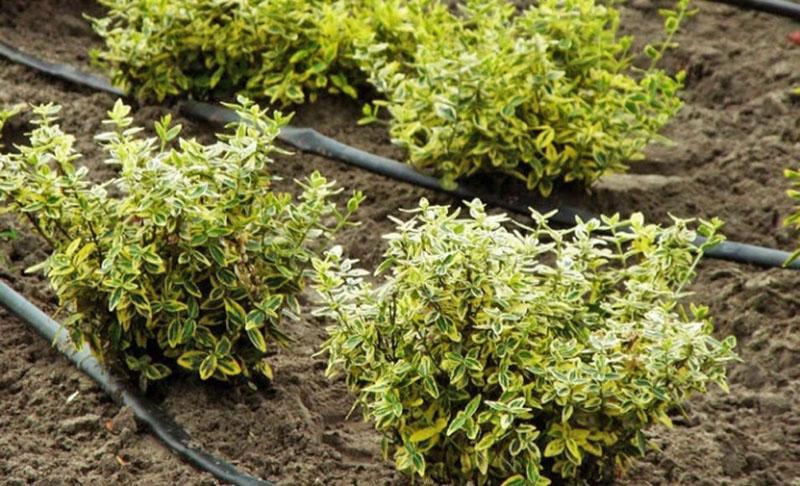 The plant requires moderate watering. Excess moisture can cause root rot. In hot weather, moisten the shrub once a week. Irrigate the euonymus at the root using only warm water. 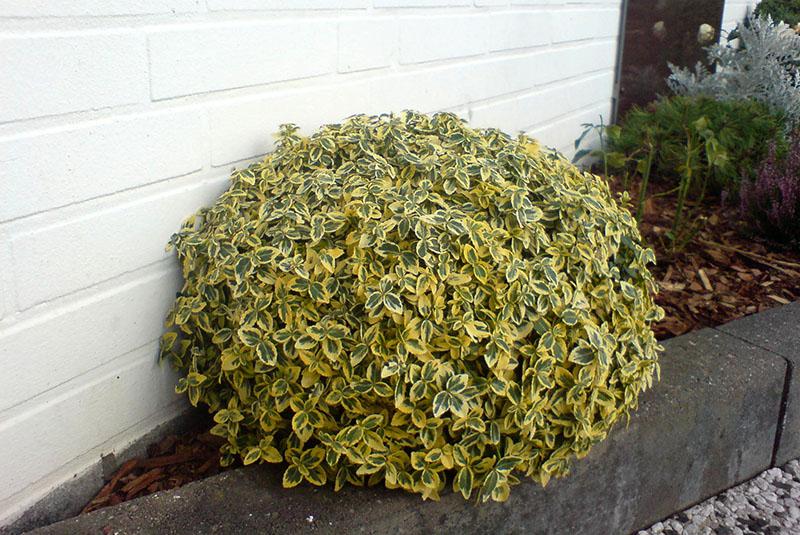 The crown of a shrub can be shaped like a ball, a cone, and a standard tree can be formed. This procedure should be performed in late autumn or early spring. Summer pruning of Fortchun’s spindle tree involves the removal of diseased, dry and damaged shoots, as well as shortening of very long branches that violate the overall picture.

Gardeners advise pinching the tips of the stems to make the bush more lush and thick.. 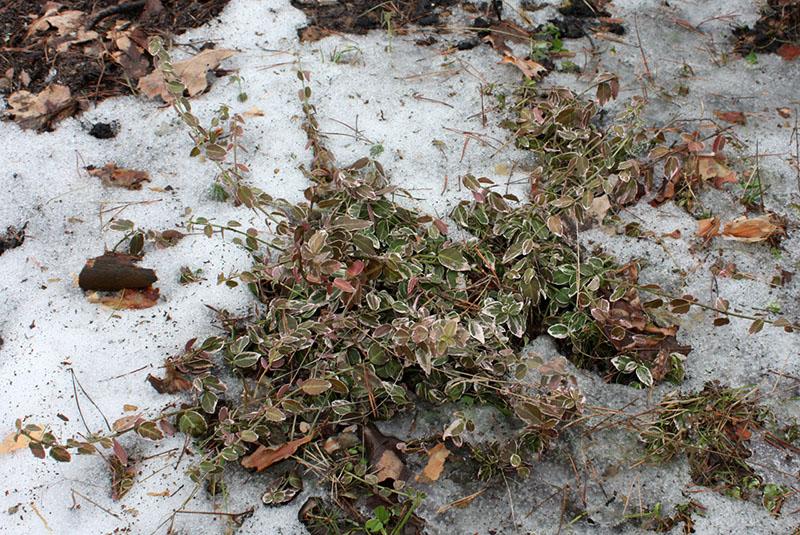 The culture demonstrates resistance to frost, is able to withstand temperatures as low as -25 ° C. In case of freezing, it quickly recovers throughout the season. Preparation for winter of Fortchun’s euonymus includes warming the root system of young plants under 3 years of age with a layer of mulch from sawdust, spruce branches, fallen leaves. 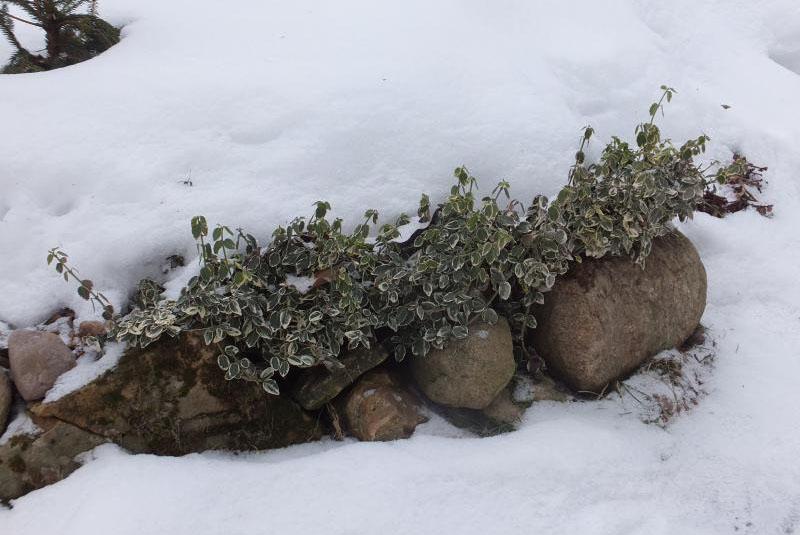 Protection against diseases and pests 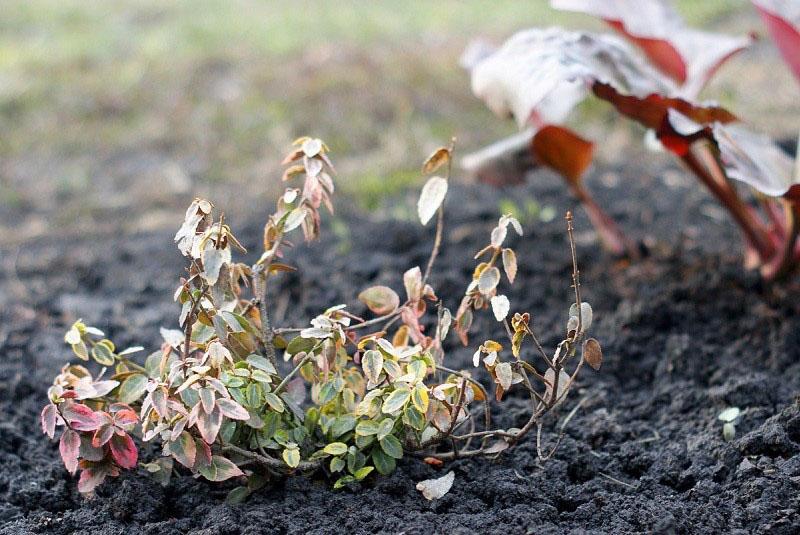 Although euonymus is resistant to disease, like all plants, it is not immune to powdery mildew in rainy, cool weather. In the fight against fungal infection, spraying the bushes with a solution of copper sulfate or fungicide works effectively.

The bushes of the plant were also chosen by harmful insects, including spider mites, aphids, and hawthorn. To prevent the euonymus from becoming the center of a congestion of insects, use insecticides. 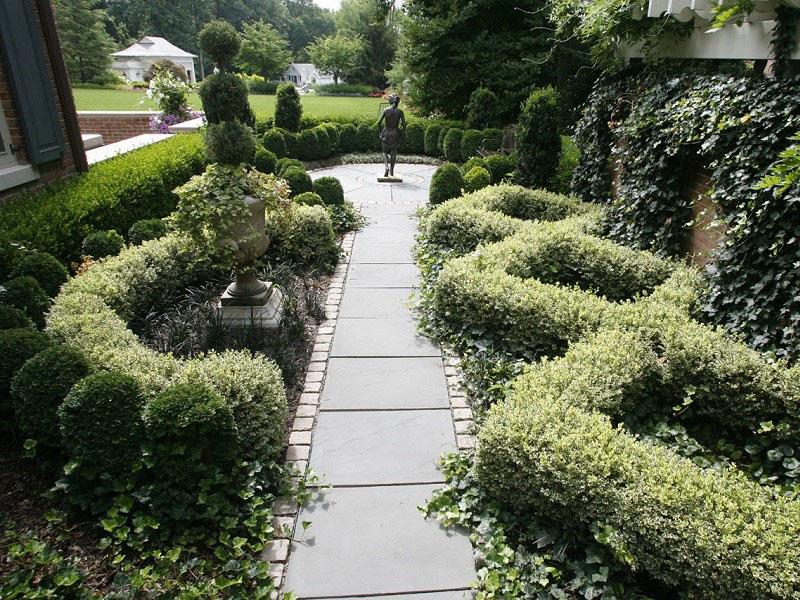 Fortune’s eonymus in landscape design, a photo of which helps to make the site original and stylish, is especially popular with gardeners. This plant is often one of the central elements of any original composition..

Low-growing varieties are used as the main element in the design of curbs, paths, lawns and hedges. 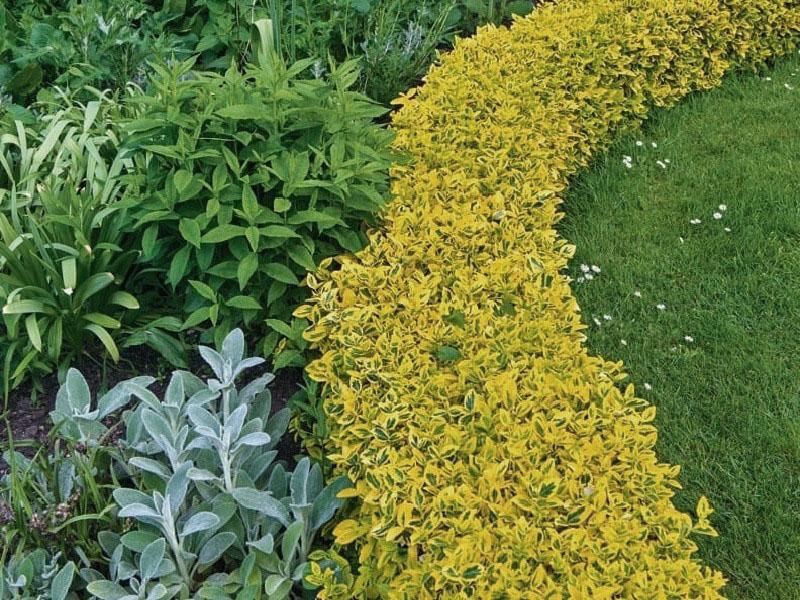 Also, the culture is actively used to create the perimeter of compositions of flower beds or rock gardens.

A special type of ground cover euonymus can occupy the entire area of ​​the lawn, so with its appearance it is able to revive the monotonous construction of the garden landscape. 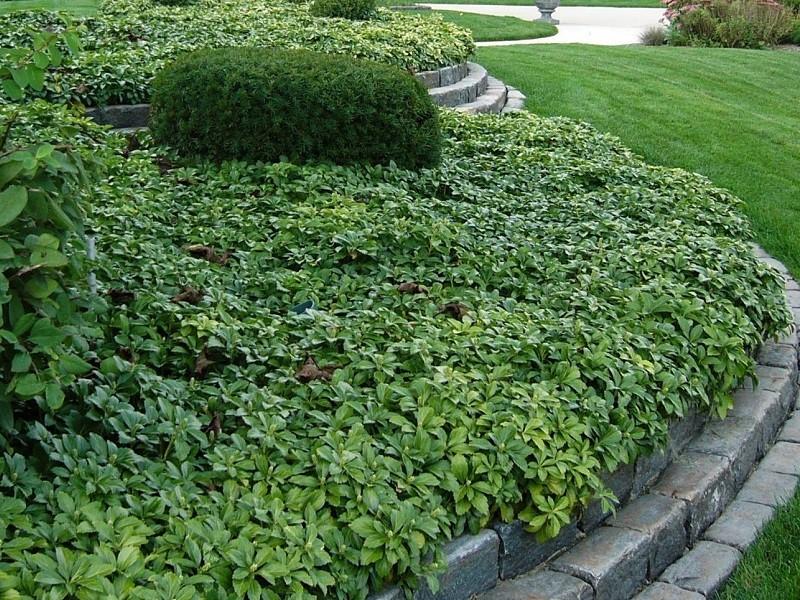 Tall varieties are usually placed in the center of the composition, while the plant requires enhanced care in the form of regular crown formation.

Forchun’s euonymus in an alpine slide or rockery is an excellent company of deciduous perennials, flowering phloxes. Low-growing junipers emphasize the brightness and decorative effect of the leaves of an evergreen shrub in the rock garden.

Looks very nice in a composition with coniferous crops. Emerald foliage with a golden border accentuates the shade of the needles, and makes the plant an unsurpassed decorative element on the site.

By planting Fortune’s euonymus in the right place, you can transform the surrounding area into a life-giving corner that delights its creator. It is impossible not to fall in love with this graceful plant. The beautiful color of the leaves, delighting the whole season, fully pays for the troubles and worries of the gardener.