Do you have a tricolor violet on your site? 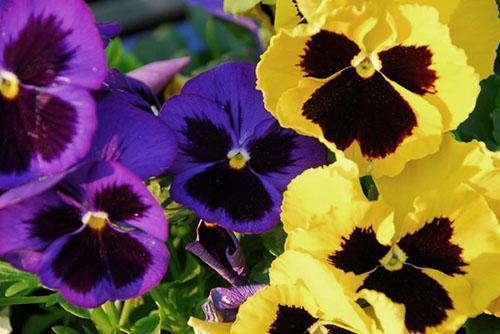 An amazing tricolor violet flower, not overseas, own, growing in meadows and copses in the middle lane and gradually appearing in Siberia. The perceptive villager, looking at the flower, gave it many affectionate names. Pansies, ivan-da-marya, moths, three-flower. Garden forms of cultivated plants are called Vittrock violets or Viols..

Distinctive features of the violet tricolor 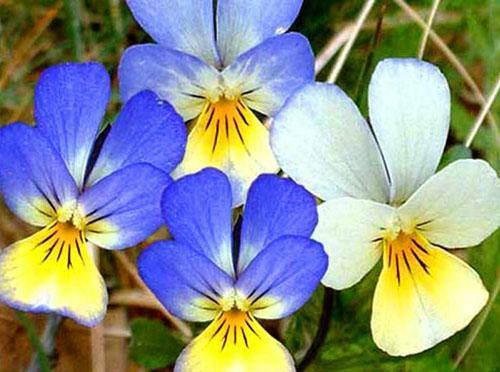 If the snow did not have time to melt in the spring, and the leaves of the overwintered violets appeared on the thawed curtains, then we are in the middle part of the Trans-Urals. In Central European Russia, the violet is an indigenous inhabitant of meadows and hollows, but not of acidic marshy soil.

A low bushy plant has a rosette of leaves of various shapes, but always with denticles. The peduncle rises high above the leaves, revealing a complex flower that biologists refer to as simple inflorescences. The five-lobed corolla has a different configuration of colored plates. The lower one is usually triangular multicolored, the lateral ones are painted in one color, the upper ones are elongated blue or two-colored. Inside, a curious or sad eye is clearly visible, depending on the mood of the beholder. Even the cilia on the petals can be seen. 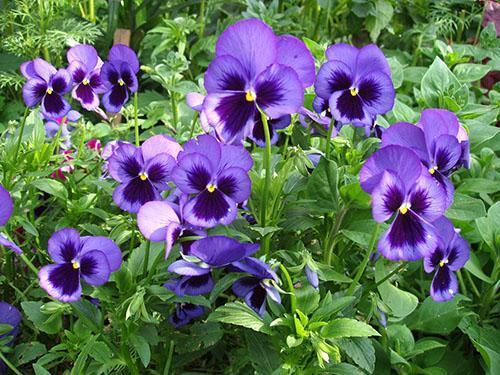 The classification divides the tricolor violet into several subspecies:

Several legends and beliefs are associated with pansies, in which there are also beautiful girls who turned into flowers, and symbolizes thoughts of a beloved. If in some places this flower was desirable in a garden and a bouquet, in others it was considered a symbol of sadness and eternity, an adornment of graves. 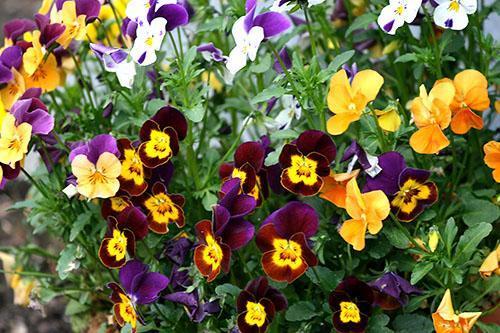 Be that as it may, at present, the sad annoys have turned into luxurious beauties, mysteriously calling to the stone garden, to the balcony, to the flower bed. The selection has gone from an inconspicuous bush, which is getting rid of like a weed, to elite varieties with giant gems hovering over equally beautiful leaves. A photo of tricolor violets only confirms the possibilities of selection.

Care and breeding of pansies 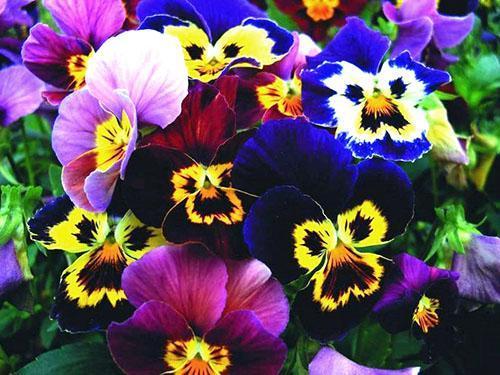 In nature, the tricolor violet reproduces by seeds and overgrowth of bushes. In culture, it is possible and most often used by seed propagation, but especially valuable hybrids transfer the properties of the mother bush only when cuttings. Up to 40 new specimens can be obtained from one mother plant..

Depending on the task, you can get:

It depends on the care of the violets and the formation of young plants, in which at least 70 days must pass before the first flowers appear. Therefore, for flowering in early summer, it is necessary to attend to in the previous season, sow seeds and leave young plants by autumn, so that they overwinter and bloom early. But later they will have to be replaced, since pansies bloom only once a year. Seedlings are already ready to replace them, which were grown at home or in greenhouse conditions. Transplanting violets grown in cups, the best way to rejuvenate a flower bed. 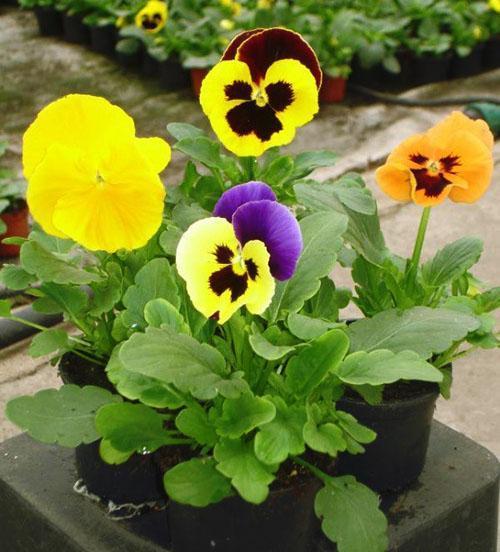 Dug out bushes can be arranged in an inconspicuous place, get seeds from them and sow again, for next year. Even if the rosettes do not get stronger, they winter well under the shelter of spruce branches and shavings so that they can breathe. 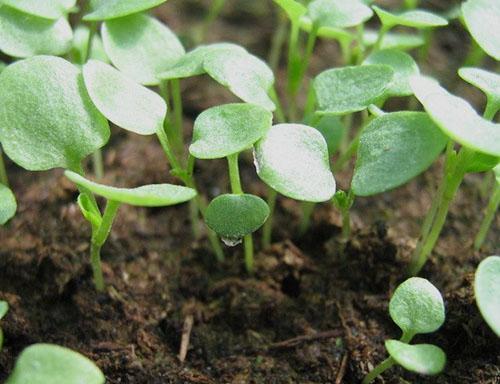 The most commonly used seedling breeding method. In a shallow container filled with a steamed composition of garden soil and peat in equal proportions, seeds are spread over the surface, which are sprinkled with snow on top. Sowing is done in February, early March. Melting snow carries small grains to the desired depth. Violets germinate quickly, after 10-12 days the seedlings are freed from the coverlet and exposed to light. In a cool place, the seedlings will not stretch, the roots will begin to work. It is necessary to find such a place so that the roots are warm, and the air is warmed up to 15 0. 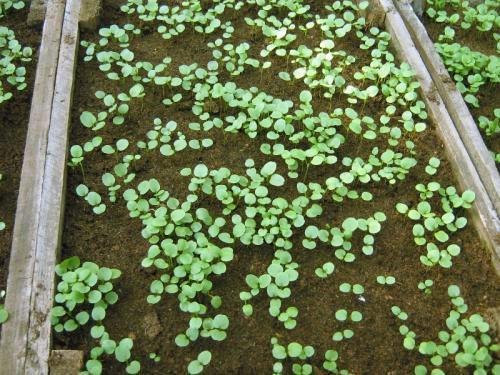 With the appearance of real leaves, the plants dive into cups and grow before the time of planting in the ground. Violets tricolor are unpretentious, can grow on poor soil and in partial shade. But on humus fertile soil, the flowers are brighter and larger in size, flowering longer. In an open, sunny place, the flowers are bright, but quickly fade.

With seeds from your garden, you can plant varietal violets. Hybrids are propagated vegetatively or each time they buy seeds in specialized stores. 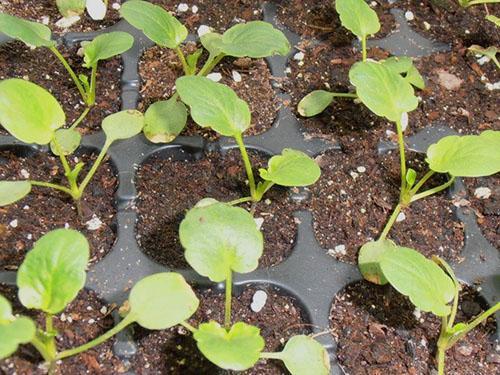 In order to propagate the violet by cuttings, you need to use two nodes from the tops of the shoots in early summer. Under the canopy of a shady tree, they arrange a place for a kindergarten, planting cuttings to a depth of 1 cm. They should take root in an atmosphere of high humidity, therefore, cover with geotextiles for several days of planting so that there is air exchange. 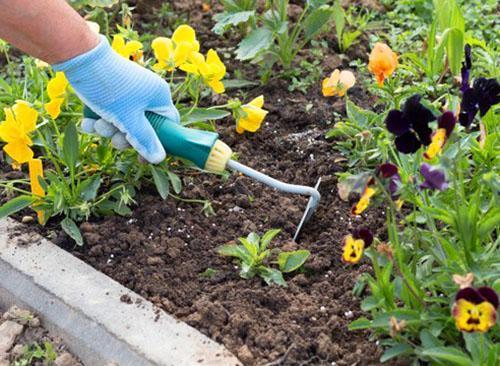 Spray, water. you will have to weed often, but within a month the cuttings will give roots and they can be transplanted to a permanent place with shelter for the winter, but it is better to leave compactly until spring. So, it will be easier to save them in winter..

The healing properties of the violet tricolor 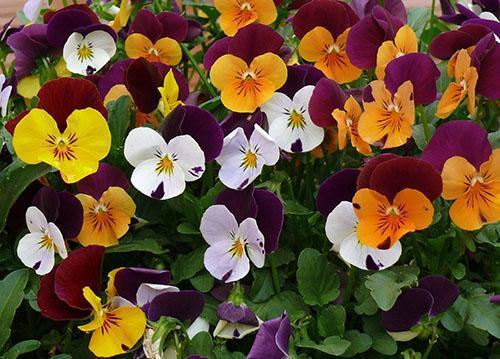 The healing power of the violet tricolor has long been known. Harvested during flowering. The entire green part of the plant is used. Like all herbal preparations, violets are dried in the shade in ventilated sheds. In rainy weather, you can arrange the grass in a thin layer in the attic. The dried material is crushed and stored in a glass container under a glass or metal lid for up to 2 years. At the pharmacy, violets can be bought separately or in herbal preparations.

The medicinal properties of the tricolor violet are due to the presence of essential oils, polysaccharides, saponins and biologically active substances in the composition. The complex chemical composition of the plant allows the collection to be used in many cases:

The list of diseases when it is recommended to use infusions, decoctions and even violets tinctures is large, but the use of medicinal forms for each person is individual. Without appropriate knowledge, expert advice, uncontrolled self-medication can be harmful. This plant has serious contraindications for use..