Ornamental and forest heather: secrets of a hardy shrub 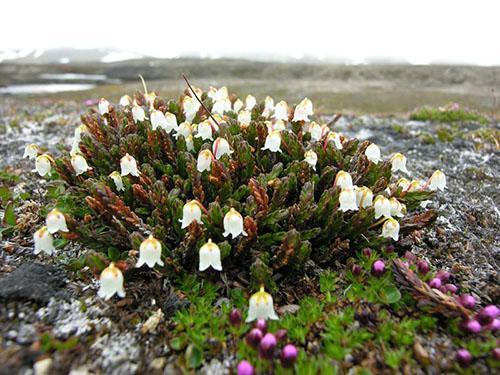 At the mention of heather, the inhabitants of Scotland, Norway and other northern European countries represent small perennial shrubs 15 to 50 cm high with shoots densely planted with scaly leaves and small bell flowers of pinkish or lilac color.

Forest heather – a symbol of endurance and good luck 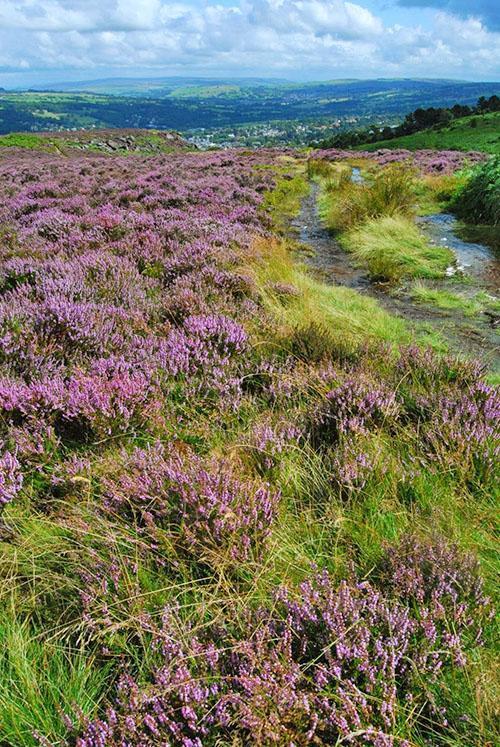 Under natural conditions of a temperate climate, common heather grows in vast wastelands and forest burns, on peat bogs and along rocky slopes. The plant is extremely unpretentious.

In one place it can exist for up to 40-50 years and is found even where other perennial crops simply cannot survive: in swamps and poor sandy soils of coniferous forests.

Low-growing species of forest heather adorn the meager flora in the tundra. For its unpretentiousness and resilience, the Norwegians in time immemorial honored the forest heather to become a symbol of the country, but in the gardens of Europe, an inhabitant of wind-blown hills began to appear only in the 18th century. In Russia, where up to 50 species belonging to this family are found in the wild, the heather garden appeared only twenty years ago on the basis of the Botanical Garden in Moscow..

In Scotland, the lucky man is said to have seen white heather flowers. 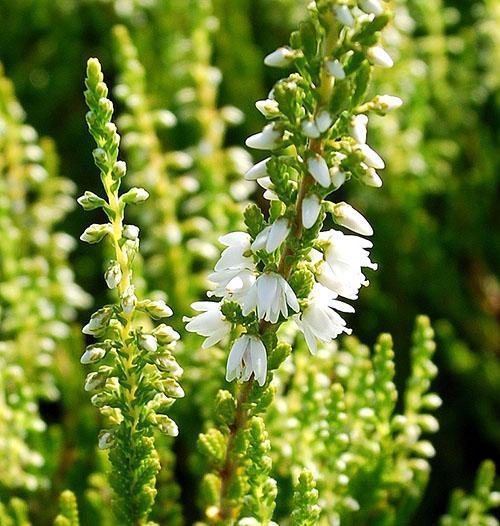 Indeed, the wild white heather is almost impossible to see in the vast moorlands, which are a traditional landmark of the country. But today, when the plant has aroused well-deserved interest from gardeners, not only shrubs with tassels of white bells, but also varieties with raspberry, purple, yellowish and orange simple, as well as double flowers, are not uncommon.. 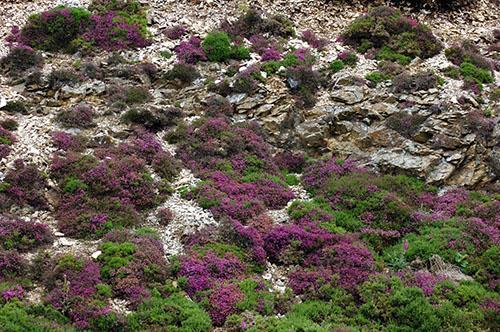 Over the past 200 years, breeders have obtained several hundred spectacular varieties of decorative heather, which can be conditionally divided into low, medium and tall plants. Moreover, besides them, the closest representatives of the heather family are actively used in landscaping, for example, erika and wild rosemary, berry shrubs such as lingonberry, dove and blueberry, as well as rhododendrons.

Closest to the common heather are various types of erica that live in nature from the Atlantic coast of America to the countries of North Africa. Wild heathers can also be seen in the Asian region, the Caucasus and the Alps..

If the shoots of forest and decorative heather do not grow longer than 70 cm, then certain types of erica, for example, tree-like, are real trees, up to 5-7 meters high. 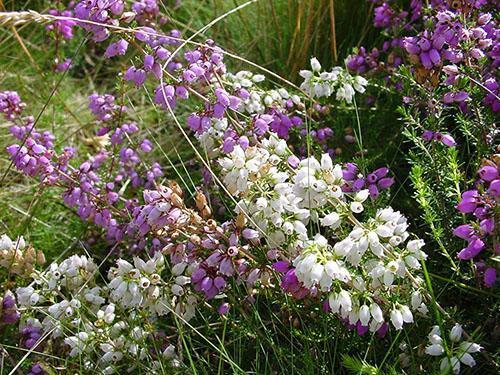 Another difference between Erica and heather is needle-shaped small leaves and elongated flower cups. True heather differs from related species not only in appearance, but also in the timing of the appearance of buds. When the heather blooms, most of the ornamental plantings in the garden are already completing the growing season and preparing for winter. In the middle zone, only in the second half of summer, and more often in August, flowers open on the bushes, which, depending on the variety, can last until the establishment of snow cover.

In several European countries and America, garden heather is an evergreen crop. The plant does not lose its decorative effect and perfectly tolerates mild winters with temperatures up to +8 ° С.

After the mass flowering is over, heather remains bright and, perhaps, the only decoration of the garden. In many varieties, the shoots are colored with all the colors of the rainbow, and the yellow, burgundy, purple or silvery foliage of the decorative heather is clearly visible on the area discolored in late autumn..

Reproduction and planting of decorative and forest heather 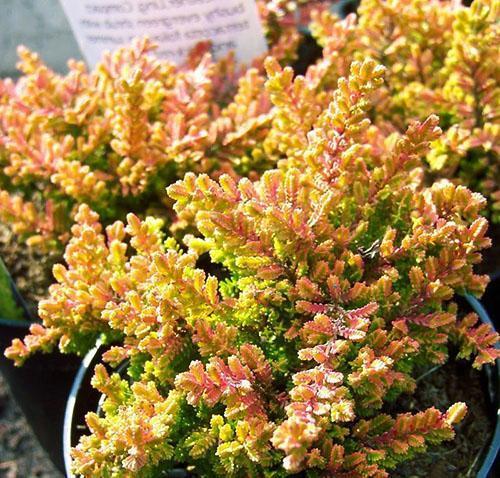 You can propagate your favorite variety of terry, burgundy or white heather both with well-emerging seeds and vegetatively:

To obtain planting material, at the point of contact with the soil, the branch is cut, treated with a growth stimulator, pinned and sprinkled with nutritious soil. By the fall, a young heather bush is ready for planting..

Varietal heather seedlings quickly take root, the root system of which is in a container with peat soil. 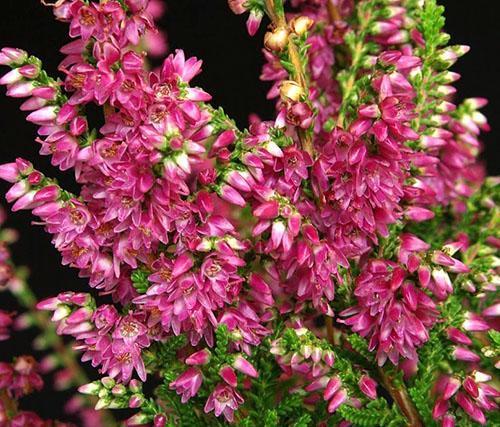 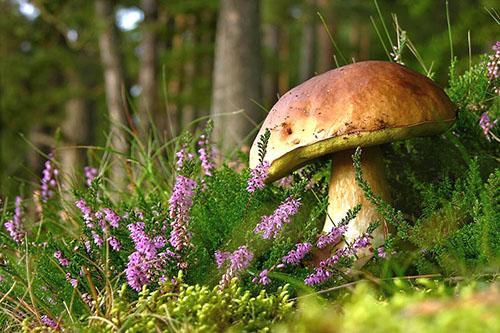 But the main task of the gardener, who decided to plant decorative heather on the site, is to prepare the soil for this plant. Despite the unpretentiousness of the culture, in many cases the experience of growing heather ends in failure. The cause of death often lies in the fact that both forest and decorative heather live in symbiosis with primitive soil fungi, which form a whitish bloom or formations on the roots of the plant. If the mycelium of the fungus dies or is completely absent from the garden soil, the shrub weakens and may die.. 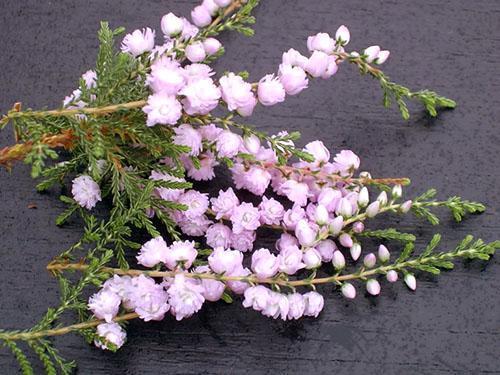 So, without taking urgent measures, the gardener will not wait for the moment when the heather blooms on the site:

If there are coniferous plantings with blueberries nearby, it is useful to add sandy soil from under such vegetation to the mixture for planting decorative heather. 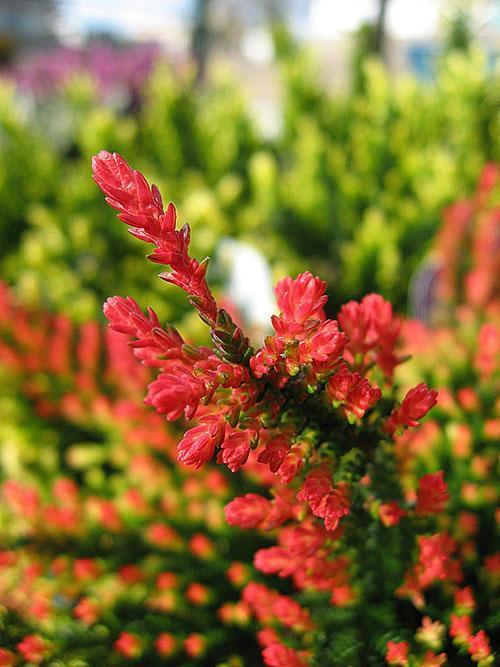 Preserving the moisture level in the soil, preventing it from overheating, and also preventing weeds from actively developing, allows dense mulching of the soil under the bushes to respond perfectly to soil mulching. If shoots of weed vegetation nevertheless appeared, so as not to damage the surface roots of the garden heather, it is better to carry out weeding only with your hands. On the eve of a set of buds, heather can be fertilized with a granular complex fertilizer at the rate of 10-15 grams per plant.

To maintain the acidity of the soil and prevent the ingress of chlorine and calcium, which is dangerous for mycorrhiza, to the roots, rain, filtered and acidified water is used for irrigation, for which 3-4 grams of citric, boric or oxalic acid are added to a 10 bucket. 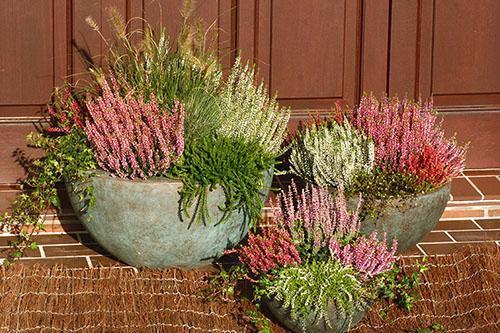 In the first two years of life, decorative heather does not need pruning, but on adult bushes in the spring, not only last year’s inflorescences are cut off, but also the entire green part of this branch to wood, as well as frozen and dry shoots.

If, when planting, all the features of this interesting culture are taken into account, the varieties are selected taking into account the timing of flowering, frost resistance and growth, then late autumn, when heather blooms, will become the brightest season in the garden. The extremely durable and hardy shrub will show itself in all its glory, and all the efforts of the gardener will definitely pay off..