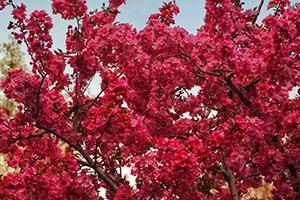 Among the shrubs and ornamental trees for landscape design and decoration of city streets, a special place is given to the Nedzwiecki apple tree. She is stunningly beautiful at the moment of flowering, attracts with mysterious colors in summer, a scattering of small shiny balls in flaming foliage in autumn. Connoisseurs of landscape design consider this apple tree the best detail in the design of the site..

Biological features and appearance of the species 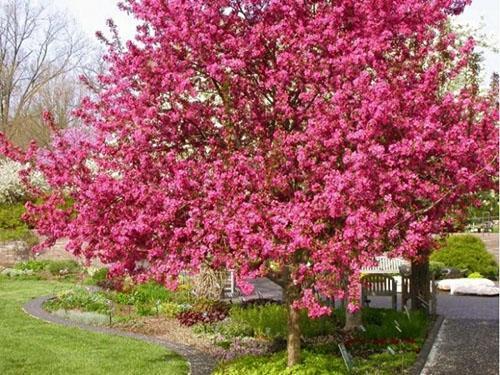 Known as an amateur botanist, Vladislav Efimovich Nedzvetsky, while traveling in China, discovered a wild apple tree in the Xinjiang province, not far from the city of Kashgar. She was unusual, 8 meters high, with amazingly decorative leaves and smooth bark. Having found out that this is an ornamental apple tree, Nedzvetsky took out either seedlings or seeds and sent them to the biologist Georg Dick. It was at the turn of the 20th century, a local historian lived in Kazakhstan. The apple tree was listed in the plant catalog and described by Dr. Dick. He registered a tree in honor of the discoverer called the Nedzwiecki apple tree – Malus niedzwetzkyana Dieck. 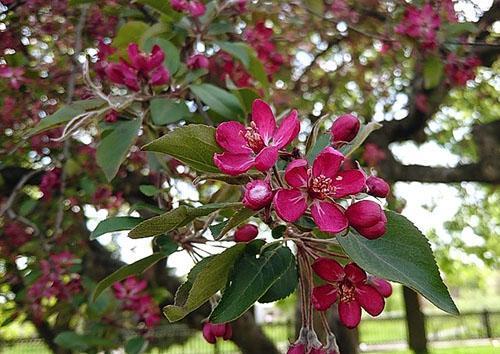 The new type of apple tree has spreading branches that create a spherical shape. The branches of the ornamental apple tree are purple-brown. Young leaves are purple, later turning dark green, leaving a red color at the base. Both wood and bark are reddish. The dark red buds of large flowers do not fall for 10 days, saturating the surrounding area with aroma. In autumn, small sour apples ripen, which can be used to make compote. The apple tree of Nedzvetsky, shown in the photo, is valued for its extraordinary decorativeness..

But this plant is no less decorative when the fire of the inflorescences goes out. The tree itself is also very attractive. In order for the decorative functions to be performed in full, it is obedient and responsive to trimming. Therefore, from a single standing tree, you can get any shape by cutting. The formation of the crown of an apple tree can go in any direction.

The tree itself, after systematic formation, can acquire forms of mesmerizing natural beauty. Do not even think that the hands of a skilled gardener, also an artist, have been working on this beauty for years. The tree, even in winter frost, leaves an unforgettable impression. 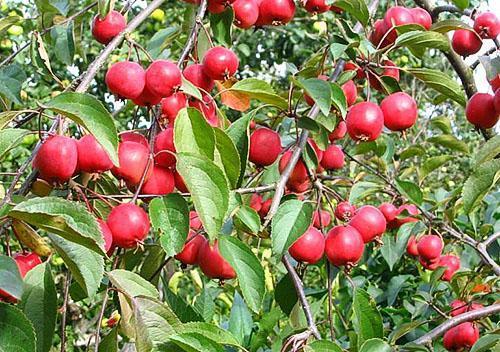 A beautiful autumn outfit with hanging clusters of small sour fruits from frosty twigs. The fruits do not fall and in winter they hang on bare twigs, inviting flying guests to feast on. But these sour tart apples are also suitable for compote..

How to grow a decorative apple tree 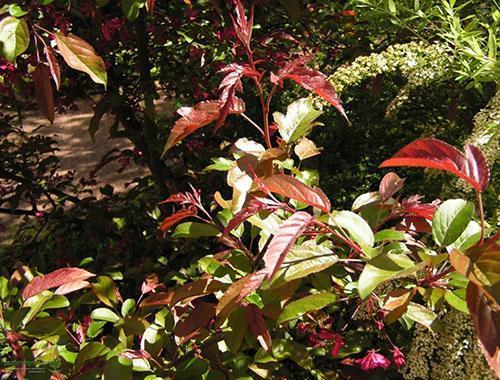 For an apple tree to be decorative, it must be healthy. The apple tree of Nedzvetskiy is affected by all fungal, bacterial and viral diseases that affect fruit varieties. Therefore, it is necessary to strictly follow all the requirements of agricultural technology and process the plants at the right time. It is necessary to choose the right planting site and fill the planting hole well with fertile soil..

The landing site is chosen open with a low standing of groundwater. Waterlogged and too dry areas are not suitable for a tree. From the third year of life, the tree gives a large increase per season. Usually two-year-old seedlings are planted in a permanent place. Later young trees get sick when transplanted. Depending on the designer’s intention, it is decided at what distance to plant the apple trees. Considering that the crown of the trees is spreading, it would be optimal to plant the Nedzvetsky apple tree no closer than 5-6 meters.

The size of the prepared pit should be one meter deep and at least 80 cm on the sides of the square, the form of which the landing site is being prepared. A fertile light composition is prepared half from humus with the addition of leafy earth and sand. Be sure to add about 300 grams of superphosphate to the pit. Planting is carried out in the fall for a month and a half before stable frosts or in the spring before bud break. Young plants tolerate urban gas pollution. The fertile soil created during planting lasts for several years.

Another way is seed propagation. In this case, the seeds must undergo stratification in the snow during the winter period. Seedlings grow in a school for two years, later the survival rate of the material is much worse. Particularly decorative varieties are propagated by grafting on a stock, which will become a seedling. Sometimes the stock is made in the stem of a columnar apple tree, transferring it from a fruit tree to a decorative. 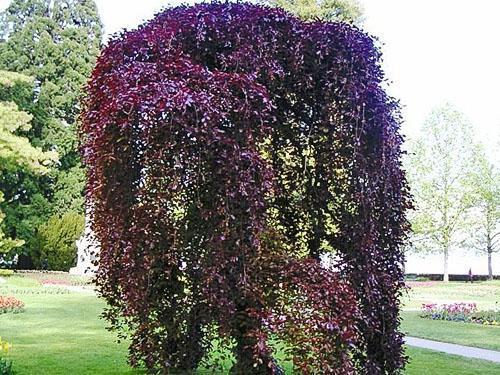 Cultivation of apple trees, and other agrotechnical measures are carried out at the same time as for fruit trees. The fight against pests and diseases is especially relevant. But since the tree is decorative, the treatments are carried out without fear of the accumulation of harmful substances in the fruits. Fungal diseases are especially dangerous for the loss of decorativeness of the tree. Therefore, blue spraying in the spring before bud break is mandatory. Even before the start of sap flow, the tree is sprayed with urea, which serves as prevention and feeding at the same time. Next comes the processing along the green cone and after flowering.

Fungicides should be used systemically to act against powdery mildew, rust and scab. Usually, the treatment is carried out using the preparations Skor, Topaz. On ornamental plants, it is possible to use chemicals against leaf-gnawing insects based on karbofos. Ordinary insecticides for fruit trees are also suitable. Spraying with Ekoberin or Zircon solutions will increase the resistance of the apple tree.

Ornamental apple trees love mulching the trunk circle. For mulch, you can use ordinary sawdust, bark from pine or other conifers, you can use walnut shells for mulching. When caring for ornamental trees, it is important to prevent damage from diseases and pests..

Watering the apple tree is carried out only during a prolonged drought. The plant does not like excess moisture. You can start a Nedzvetsky apple tree only in areas where there are no frosty winters. In Eastern Siberia, such a tree will not survive.

How to use a decorative apple tree in garden design – video