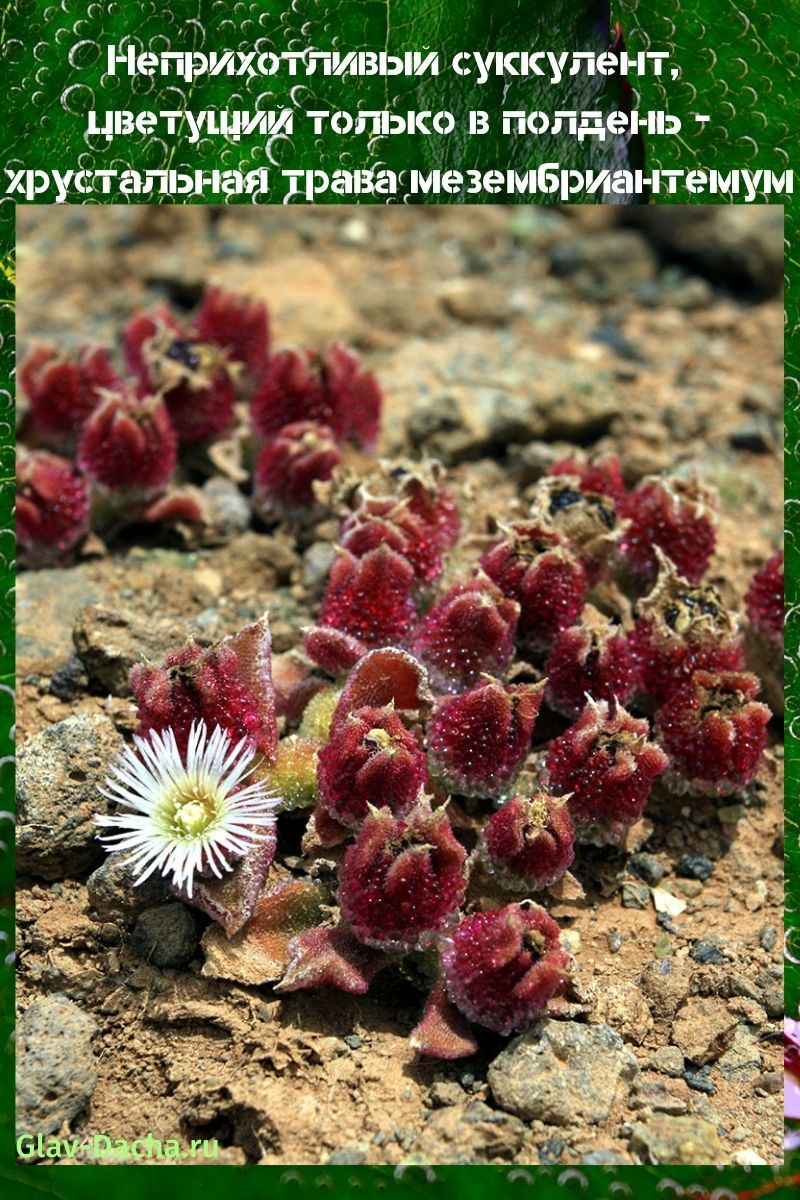 If you look at its leaves, illuminated by the sun, you can see small droplets that effectively shimmer with a special brilliance. The crystal grass mesembriantemum got its unusual name precisely for this, but it would be more correct to call it a flower. And with a rather contradictory character. On the one hand, compact bushes are able to survive in hot summers, since they belong to the group of succulents. But the charming chamomile flowers are revealed only when the sun is shining on them. Interesting, isn’t it? If your site is flooded with sunlight almost all day and does not have shady places, then this plant is for you.. 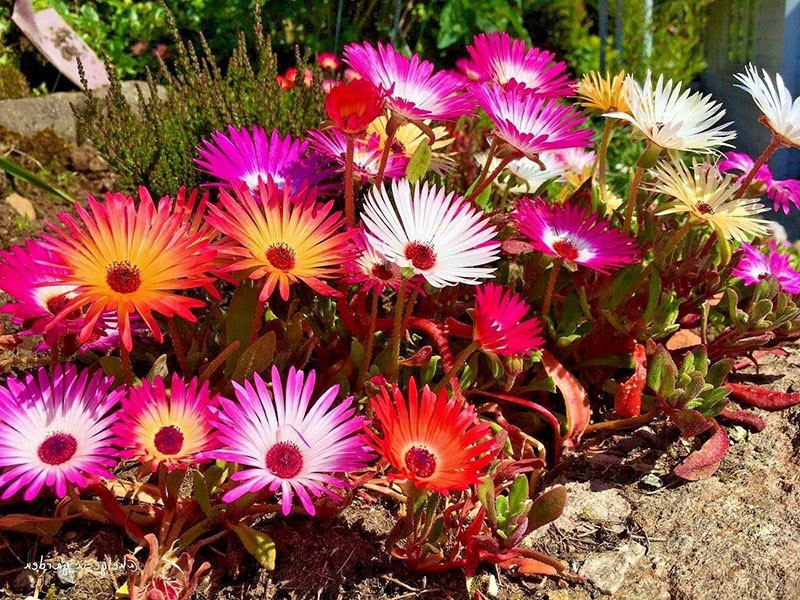 Unusual succulents belong to the Aizaceae family, in which they are represented by a separate and numerous genus. Most of the species included in it are annuals, but there are also biennial varieties. However, if we consider the culture from the point of view of cultivation in our climate, then it will be annual. Due to its extreme thermophilicity in the open field, mesembryanthemum does not survive. 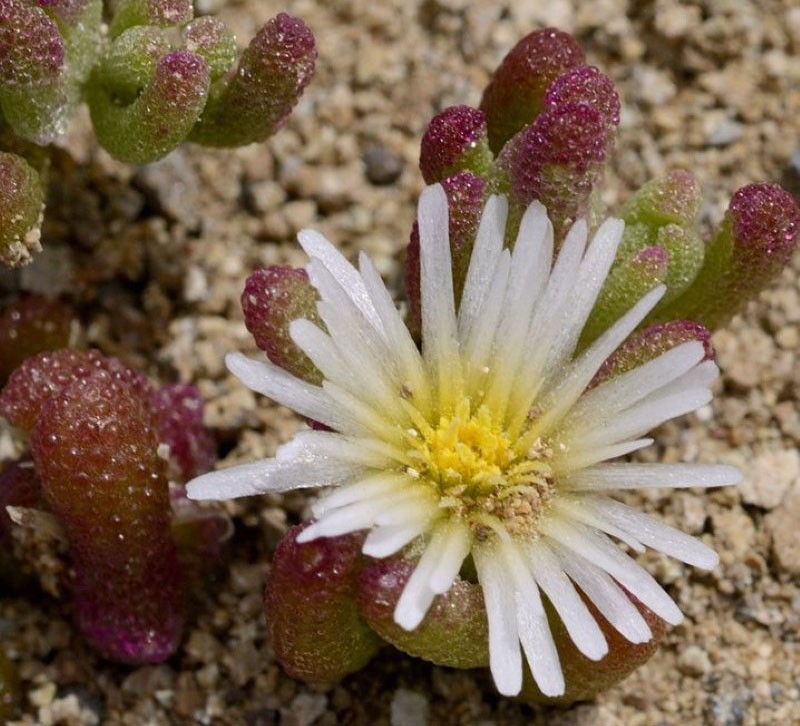 Crystal grass really grows almost like grass – the height of its bushes does not exceed 15 cm. At the same time, the stems are recumbent, most often spread along the ground or spread, and branch strongly. Thanks to this, by the end of summer, a whole picturesque green carpet grows in place of a pair of bushes. The leaves themselves are often rounded, fleshy, grow close to each other. The color is not particularly saturated, but pleasant to the eyes, pale green. Leaf plates without chlorophyll, covered with glandular hairs, the main task of which is to store moisture. It is she who shines in the sun inside such cells..

For an extreme love of the sun, the mesembriantemum has many more names. Most often, it is found as a “afternoon”, because it blooms at this time of the day. For the shape of the flowers and resistance to drought, the plant is called African chamomile..

Although, perhaps, this daisy has become, because Africa is its homeland. And for the glandular hairs on the leaves, which absorb moisture and shine in the sun – in fact, crystal and even ice grass.

Midday inflorescences are more like daisies in shape. They are not very large, maximum 4 cm in diameter, located on long peduncles. Most often they form a brush, but there are also single flowers. The petals are always narrow, mainly creating double flowers. There are also simple buds, in which thin petals in one row surround the middle. Such varieties look especially touching, and the dark core of the flower looks like a peephole..

Crystal grass blooms from the beginning of summer to the very frost. But if the weather is cloudy and there is no sun, the buds are closed.

As the flowering proceeds, seed boxes ripen in place of the buds. They are very small, and in each such box there can be 2-3 thousand seeds..

The best African chamomile varieties for your garden

Today there are more than 70 types of mesembryanthemum..

Most often, in city parks and in private flower beds, the following midday is grown:

The classification of this plant has not yet been completed. The genus is periodically replenished with new species. And some cultures, on the contrary, were removed and assigned to other genera. For example, this happened with a charming flower, also with juicy leaves, called aptenia. 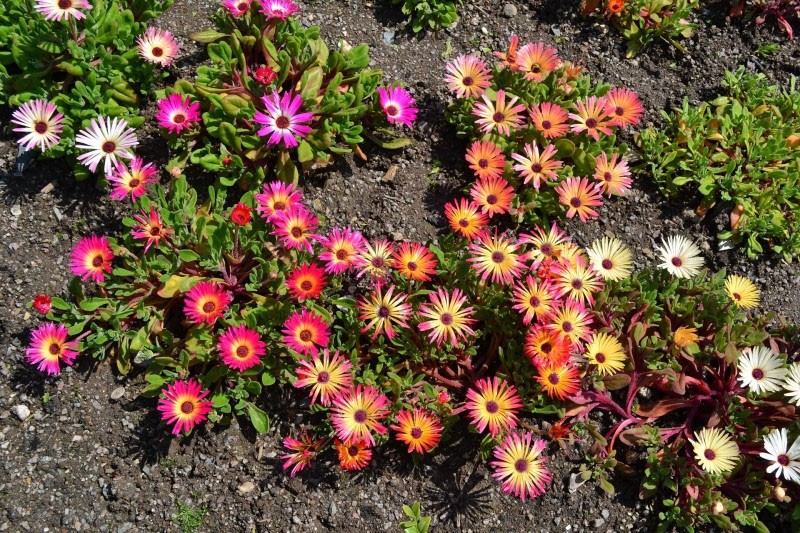 Given the special love of the mesembryanthemum for the sun, it is not difficult to understand that it is necessary to plant it in an illuminated area. Shady places are absolutely not suitable for this flower, if only because there will be no flowering there. And plants will develop slowly with a lack of lighting, and their shoots will begin to stretch. In addition, in such areas that do not dry out for a long time in a wet summer, there is always a risk of decay. As for the soil, the afternoon tea grows best on light sandy and rocky soils. The plant is often planted in rock gardens and rockeries.

Do not plant mesembriantemum crystal grass in lowlands where moisture stagnates. And also next to moisture-loving crops that require frequent watering.

How to care for crystal grass in the garden 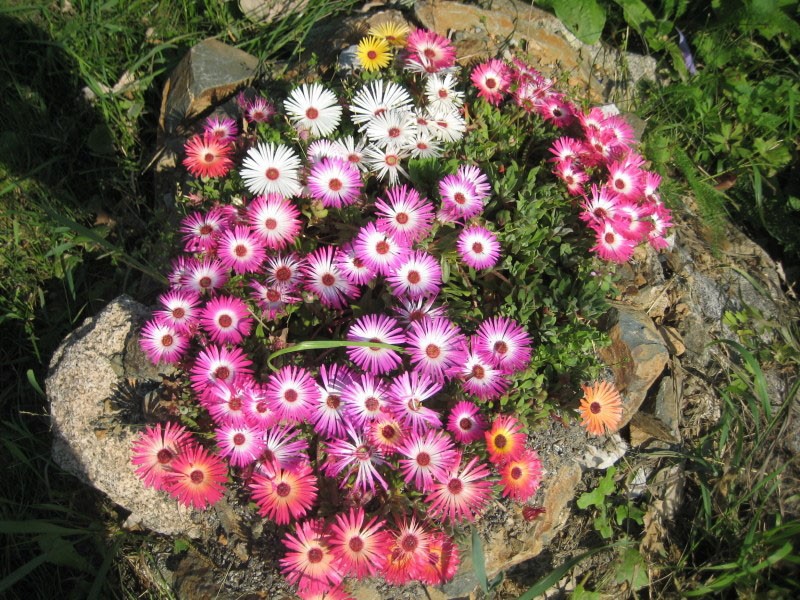 In addition to lush flowering and unusual decorative appearance, African chamomile can still be eaten. Its young leaves are very juicy and taste like spinach. But do not forget to first find out exactly what your variety is called..

Most types of mesembryanthemum contain hallucinogens in the leaves.. 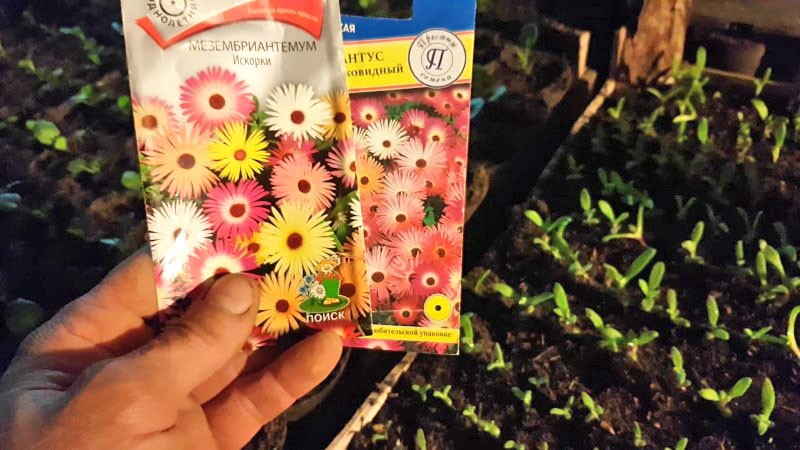 In our climate, crystal grass is grown mainly by seed, like all annuals. There is nothing complicated in this, the seeds germinate well and do not lose this ability for two years. The only thing that can be troublesome is they are very small..

There are two ways of sowing:

Vegetative propagation of the mesembryanthemum is also possible. But for this you will have to dig up the mother bush and bring it into the house for the winter..

And in the spring, in March, it will be possible to cut cuttings from it and root. Keep them warm until May, and when the frosts pass, plant them in a flower bed. A midday plant grown from cuttings will bloom much earlier, while still in the house..

Summing up, we can safely say that the mesembriantemum flower is unpretentious, and planting and caring for it will not take much time. Despite its modest size, crystal grass is very decorative. Perhaps there is no other such plant that would look so impressive, ranging from shimmering leaves in the sun to delicate daisies covering the flower bed with a carpet. A drought-resistant and almost disease-free midday will decorate your garden.