Features of the care, reproduction and structure of the garden fern 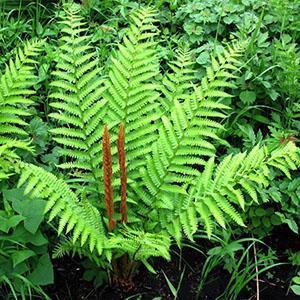 Ferns can be found from coniferous forests to the tropics, in almost all natural and climatic zones. The garden fern is most often indigenous to the area where the garden plot is located..

Such a selection of crops allows you not to worry about the acclimatization of plants and the creation of special conditions for them. In addition, ferns growing in Russia are no less decorative and attractive than tropical species, but it is much easier to care for them..

Which garden ferns should you choose? Are there any species in our forests worthy of decorating an alpine slide, a flower bed or a group planting of conifers??

Ferns in the garden: unpretentious species

If at home growers often grow exotic species, then in the garden is the place for plants more adapted to frosty winters, hot summers, autumn cold rains and other vicissitudes of the Russian climate. And there are a lot of such species, adapting to planting and care in the country, there are many ferns. 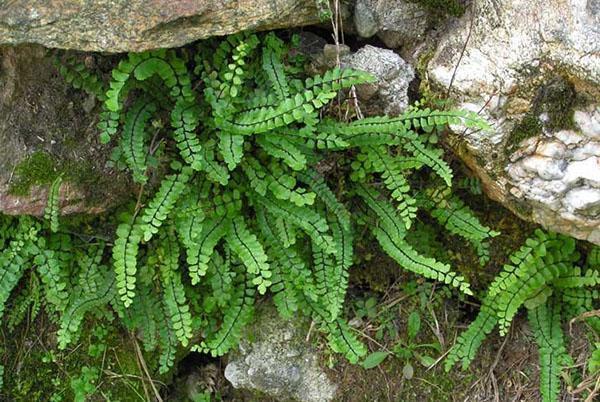 Asplenium can be called one of the first. Although many ferns belonging to this genus are quite thermophilic, there are varieties whose openwork leaves tolerate wintering well in the middle lane. Plants prefer partial shade, where they willingly form rosettes of medium-sized but very attractive leaves that retain their decorative effect from early spring until snow falls.. 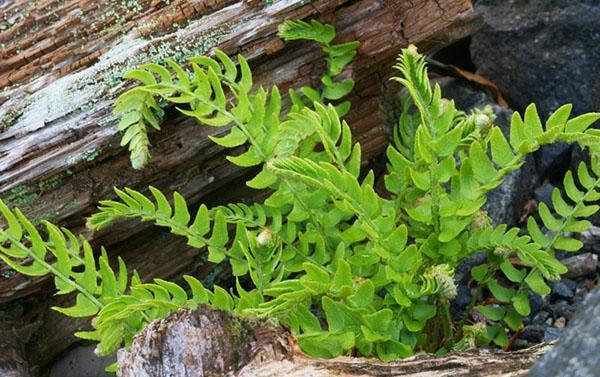 The stunted woodsia is a medium-sized garden fern that naturally prefers to settle on rocky ledges and even on old walls. The height of the crown of small fluffy leaves, depending on the species, reaches only 5–20 centimeters. At the same time, the plant belongs to long-growing ferns, and in one place it perfectly exists for up to three decades.. 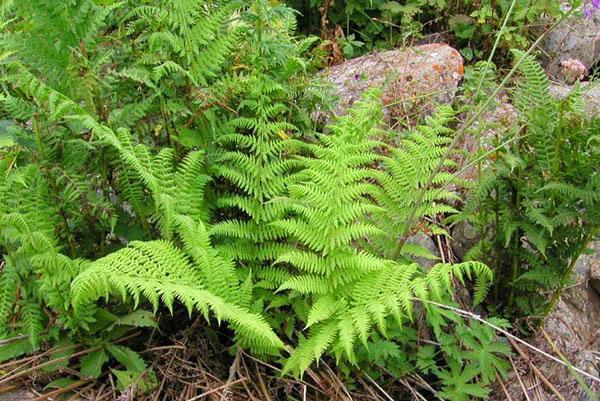 Kochedzhnik forms a dense bush up to a meter high. The peculiarity of this fern growing in the garden is the constant formation of new foliage.. 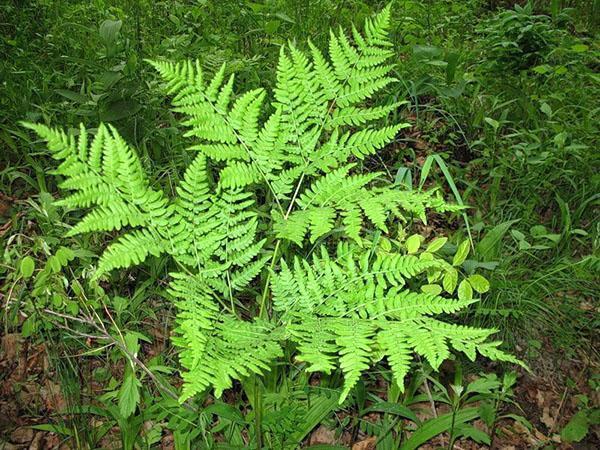 Bracken is considered to be one of the most widespread ferns in the world. Its clumps can be found in the Arctic lands and in Australia. For the middle lane, this aboriginal species is perfect as a garden culture. The triple carved leaves rise high above the ground level and can become a refuge for early bulbous ones. When planting a fern in the garden and caring for it, the bracken is able to grow rapidly. Therefore, it is important to immediately take measures so that the culture does not go beyond the allocated area.. 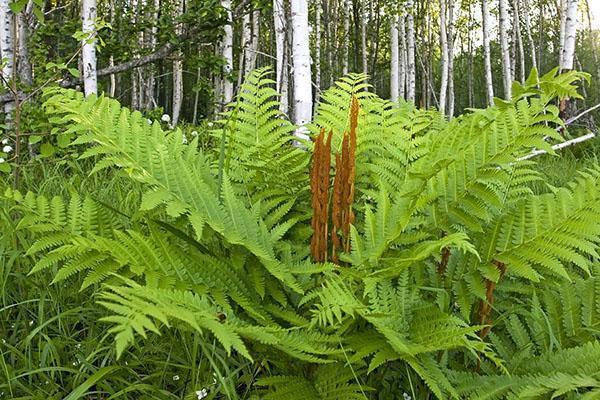 Osmunda or Chistoust is the largest representative of the family in central Russia and southern Russia. In nature, it can be found only in the forest zone of the Caucasus and eastern Asia. And in the garden where the fern grows, it will become the center of a flower bed located on a damp corner. 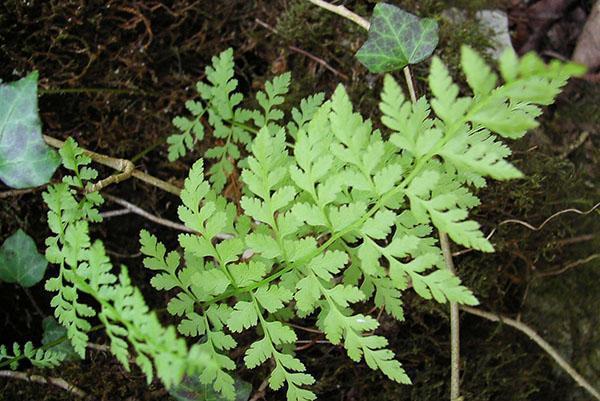 On the alpine slides, another non-capricious garden fern will find a place for itself. This bubblewort is a small shade-tolerant plant with graceful foliage that disappears for the winter..

Planting and caring for garden ferns

To decorate the garden with ferns, plants from both the neighboring grove and the garden center are suitable.

But if in the first case, a carefully dug bush falls into the ground almost instantly, and the gardener may not take measures to further protect the roots, then the fern brought from afar is threatened with drying out and death.

To protect the plant from moisture loss, which is critical for the culture, the rhizomes are wrapped with a damp cloth or moss before transportation, without disturbing the remaining earthen lump. If the leaves have time to droop before planting, they will no longer regain their elasticity even after watering. To simplify further care, the planting of garden ferns is carried out immediately.. 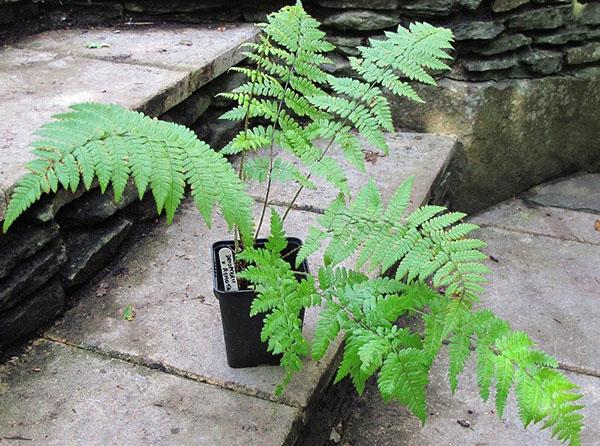 The place is chosen so that the greenery does not suffer from direct sunlight, and the soil retains little moisture for as long as possible. Plants are undemanding to the composition of the soil, the main thing is that the substrate is loose. Sandy loam mixtures with a high humus content are well suited.

If the plant is taken from the forest, it is useful to collect land here and fill the planting hole with it. This will speed up the acclimatization of the fern in the garden..

In the future, it is important to water the plant regularly at intervals of 5-7 days. And carry out top dressing using complex means, including organic matter and mineral supplements. 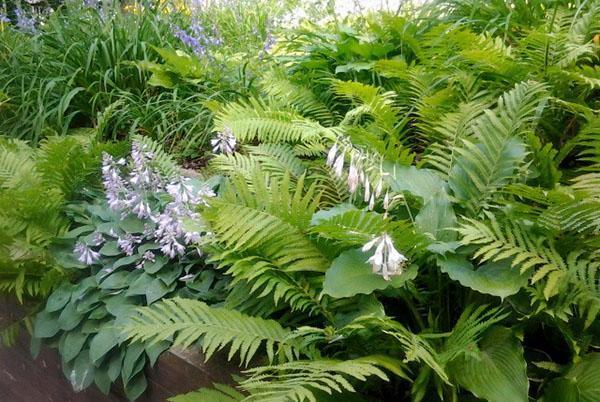 The optimum temperature for garden ferns is 15–25 ° C. On summer days, especially in well-lit areas, plants require more moisture, and they are excellent for watering with watering foliage.

If a fern planted in the garden grows quickly, then after three years it may grow and require thinning and restriction. This is done in early spring, carefully removing old specimens and dividing the bushes. Along the way, you should outline the boundaries of the site intended for the garden fern by digging a special mesh, geotextile, slate or boards to a depth of at least 20 cm.

Features of the structure and reproduction of ferns

In addition to dividing mature bushes, some ferns can be propagated by budding. This should be done in early autumn. A developed healthy leaf plate is tilted to the ground and sprinkled with moist soil along the edges so that the central vein remains in the air. 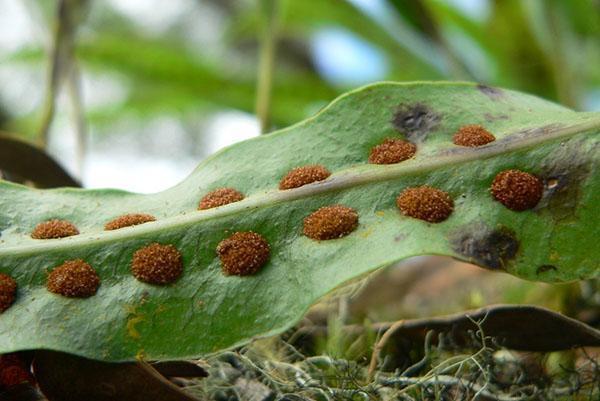 A garden fern leaf overwintered in this way will give the gardener several tiny daughter rosettes in the spring. They should be separated very carefully, trying not to damage either the aerial part or the rudiments of the roots. Plant small ferns in the garden.

If you use the structural features of ferns and their reproduction, you can wait for the maturation of spores on the back of the leaves..

At first, the spores are well dried in paper envelopes, then, in the middle of winter, they are sown over the substrate collected where the fern grows. In moist soil, the spores will have to stay for up to a month, until the first signs of the emergence of new plants become noticeable. In February, the sockets are transferred to the greenhouse, and with the arrival of heat, they are transplanted into the ground to a permanent place.

Fern in the garden video