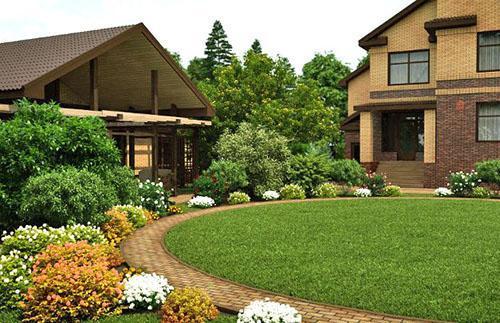 One of the wonderful green plants of the shrub type, which is very widespread in the garden and park economy, is the spirea. Due to its abundant flowering, low requirement for soil fertility, as well as unpretentious cultivation, it is she who can profitably transform any landscape. Numerous types of spirea with a photo make it possible to best see all the beauty and harmony that an amazing shrub gives, especially when it is correctly and correctly located in the garden.

In general, white spirea belongs to the genus of ornamental shrubs of the pink family, moreover, having a deciduous type with a shallow and fibrous root system. The name Spiraea comes from the Greek σπειρα, which means “spiral” in translation. The branches of this shrub can be different – creeping, spreading or straight, with a color from light to brown. Small buds are both pointed and ovoid, with several scales, and the leaves are ordinary petiolate with three to five lobes. Young growth and shoots are usually light green in color, and in some species they are reddish, yellowish and even slightly brown. 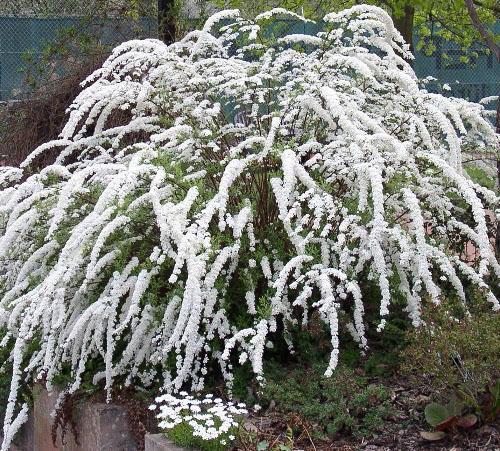 This deciduous shrub has beautiful branches elongated in arcs, on which umbellate inflorescences of a double type are located. The longest flowering period for the bush is in May-June, when it is almost completely covered with exquisite slightly pointed inflorescences. Today, gray spiraea Grefsheim, a photo of which allows you to see all its beauty, can be purchased in specialized flower shops.

Due to its rapid growth, it will delight the owners with abundant flowering within a year. It should be remembered here that this type of spirea is photophilous and does not tolerate strong shading. At the same time, this shrub is an excellent honey plant, which experienced beekeepers are well aware of.. 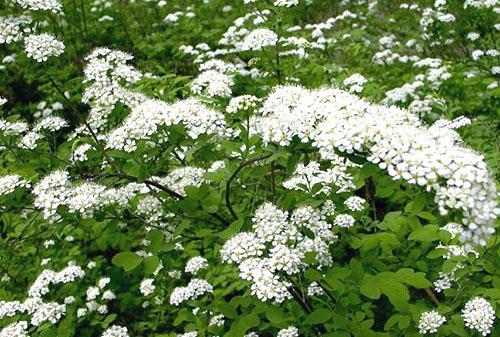 Long ribbed shoots of this type of spirea in combination with interesting green-gray foliage with denticles distinguish it favorably from all the others. The shrub reaches a height of 2 meters, however, during the growing season, under the weight of the inflorescences, the branches lean almost to the very ground, and therefore from the side it may seem like a rounded bush. The first flowers bloom in early May, after which the spirea blooms for about 25-30 days, pleasing the eyes of those around with exquisite inflorescences.

It should be noted that spiraea Dubravkolistnaya grows especially well on rich soils and is very sensitive to watering, which should be regular. This variety is quite winter hardy, and therefore such a spirea can be grown in the northern latitudes of our country. When cultivating the plant, it is also recommended to mulch the near-trunk circle with peat, which allows it to retain moisture well and prevent the earth from becoming covered with a dry crust.. 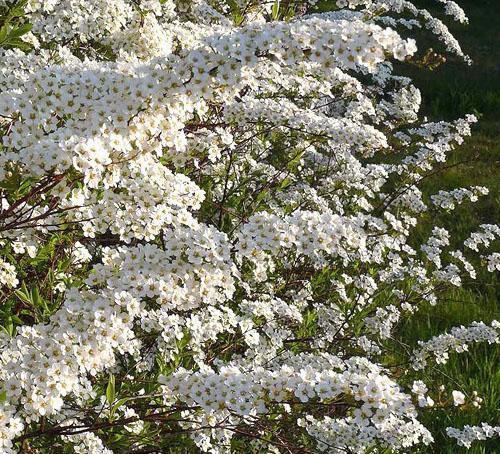 A very beautiful plant that tolerates a haircut well, and also pleases others with a bright and lush spring flowering is the Argutta spirea, a photo of which is presented in the article. Graceful thin branches are slightly bent under the weight of flowers, which are numerous umbellate inflorescences. A distinctive feature of this type of spirea is that its annual growth is small, only 20 cm, and therefore it grows rather slowly.

This shrub is suitable for both urban and suburban landscaping, as it tolerates even a little shading. You can plant it both singly and in groups, forming beautiful alleys in a park area or a green square. 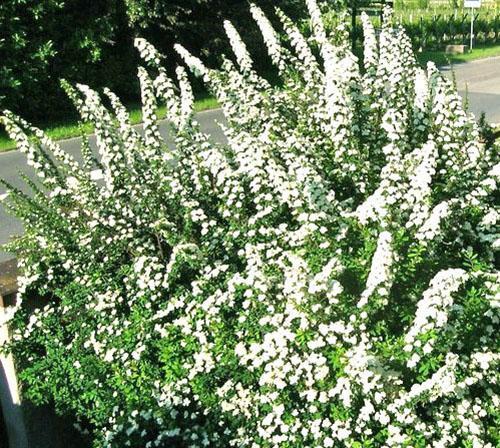 Unlike other types of these plants, the Nippon spirea has not white, but white-yellow inflorescences, which are collected in large clusters located at the very tops of the branches. Arcuate branches can reach a length of 2 meters, and in the girth a shrub can sometimes even have 2.5 meters, therefore, they are usually placed separately. The shrub blooms later than its counterparts, already at the end of June and pleases people with its bright flowers for 15-20 days.

If we talk about the scope, then such a spirea can often be found in rock gardens, along park roads, forest edges and squares. It is best to grow a plant on moist soils, however, it is not particularly demanding on nutrition. Has a fairly fast growth rate, which also distinguishes it from other varieties of spirits. 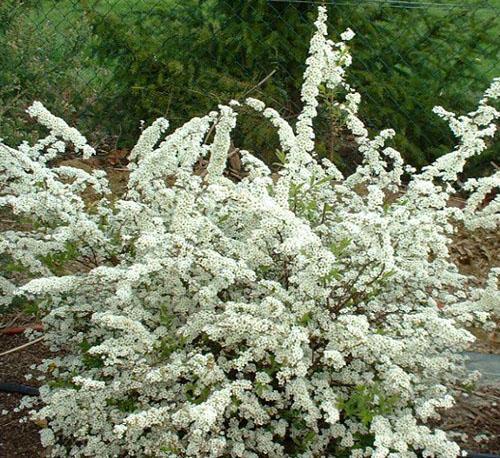 A beautiful spreading shrub that blooms from mid-May to mid-June, as a result of which you can admire interesting umbrella-shaped inflorescences for almost a whole month. It is interesting to note that after the main flowering, they do not fall off, but gradually change their color to orange and carmine, and the spirea still leaves in autumn. Due to this property, it is Thunberg’s spirea that is often grown on the backyards of many of our compatriots..

From the botanical properties of the plant, one should highlight good winter hardiness, as well as smoke and gas resistance. The advantages should also include undemanding soil fertility, good pruning tolerance, excellent drought resistance. If the soil is drained, then this is a great advantage, since the spirea grows much faster.. 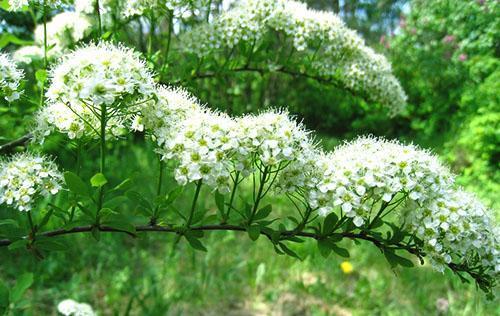 This gorgeous shrub belongs to the Rosaceae (pink) family, and is grown mainly in the Far East and Siberia. Due to its excellent winter hardiness, it does not freeze out and can grow in one place for up to 15 years. At the beginning of summer, the spirea Average releases its corymbose inflorescences, which are located right along the entire growing shoot.

Often, this shrub is used as a hedge, because it tolerates a haircut well, so landscape design specialists love to use it. Can grow on almost any type of soil, including limestone and loam. 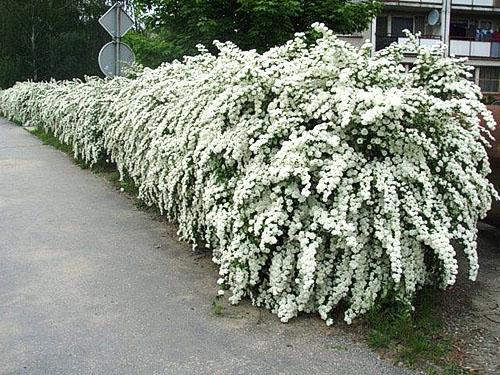 The unique and very beautiful White Spirea has bisexual inflorescences that bloom in early spring and have a pronounced snow-white color. The flowers here are white and look like real bunches that have been blooming for a very long time. This type of plant can be found in the foothills of the Caucasus, Korea, China and even Japan, all of which can withstand low temperatures well..

The leaves of the plant are lanceolate types, very much like asterisks. The height of the shrub reaches 1.5 meters, but it needs sufficient lighting, so it is best placed on the south side of the site. Fortunately, this shrub has no special requirements for the soil, therefore such a spirea is very unpretentious to cultivation.. 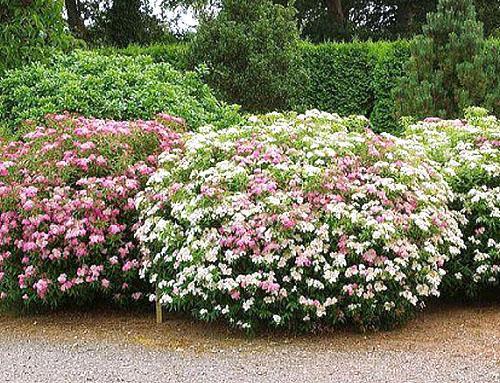 The bright yellow color of this plant is pleasantly pleasing to the eye, raising the spirits of passers-by and turning even the most ordinary landscape into a unique and extremely beautiful one. Today, such a shrub can be found both in parks and in public gardens of many cities, and often ordinary owners of private houses also prefer to plant it in their own homes..

This type of plant is best suited for decorating borders, and it perfectly tolerates a haircut, including a short one..

It should be noted that Japanese spirea is found today throughout the northern hemisphere, since it is unpretentious to growing and caring for it.. 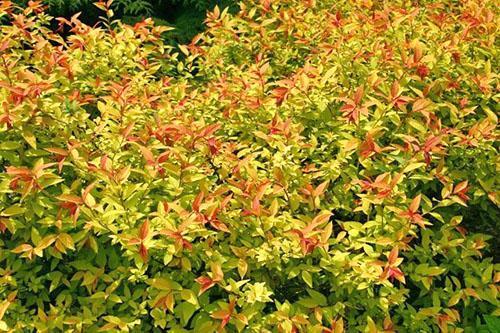 An interesting hybrid that originated from the crossing of the white-flowered and Japanese spirea is the Bumald spirea, the photo of which best demonstrates all the beauty and splendor of the plant. The uniqueness and originality of its color is due to the fact that here you can see green and peach colors, which create a magnificent range of unique compositions.

The height of such a plant usually does not exceed 1 meter, so it belongs precisely to the ornamental type of shrubs. At the same time, it is not easy to grow it, since this type of spirea is quite demanding both to the soil and to systematic watering.. 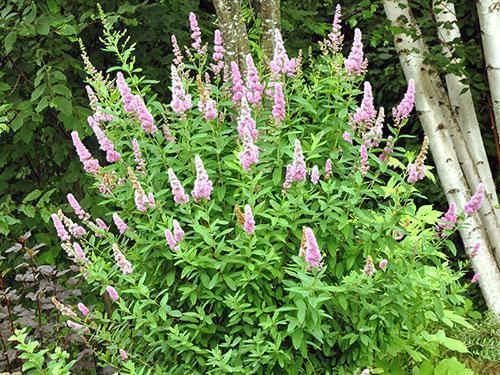 Billard’s beautiful spirea, a photo of which can be seen right here, is a hybrid variety with beautiful orange-red leaves, which gradually turn yellow, which is very pleasing to the eyes of their owners. All flowers are collected in small pink umbrellas, which bloom quite late, but this plant does not lose its attractiveness at all.

It is noteworthy that the inflorescences here are of a conical type, up to 20 cm long, and young shoots first have a green and then a reddish-brown tint. Due to the significant number of root suckers, it reproduces quite easily, while having good frost resistance.. 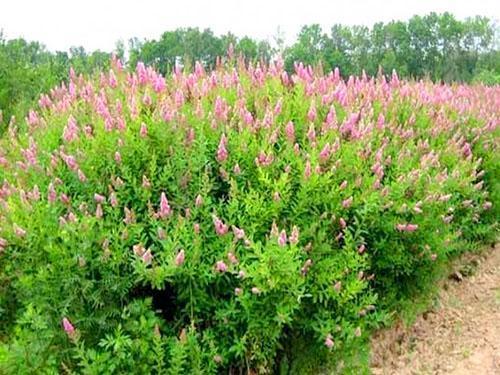 An interesting deciduous shrub that has a very beautiful appearance, due to which it is widely used in landscape design. This type of spirea begins to bloom from the age of 3, but after that it will grow and annually please the eye with abundant flowering for 20 years. Douglass spirea propagates both by cuttings and seeds, however, the first option is most often preferable.

Despite its overseas origin, today this type of spirea can be found in gardens, parks and squares of various regions of our country..

Unpretentious plants for the garden – video

Landscape design
Previous Post
Why are peas grown in your garden useful?
Next Post
Pear variety Belorusskaya Late is grown for long-term storage of fruits