We study the diseases of mountain ash and begin the fight 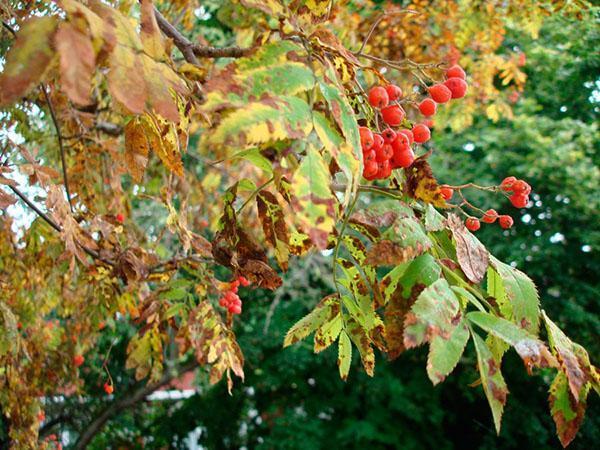 There are various diseases of rowan ordinary. But if you know how to deal with them, you can grow a beautiful and healthy tree, which will delight with abundant flowering and colorful berries..

Leaf problems can be observed from May to June, as well as in the second part of summer. Due to lesions, the plates dry out, fall off, and also change the howling shade. This not only leads to a decrease in the decorativeness of the tree, but also is a place for the accumulation of a large number of infections..

The main sources of the disease are fallen leaves, on which pathogens have settled.

The main diseases of leafy plates:

In addition to these diseases, there are other problems that require a closer acquaintance..

The fungus Phyllosticta aucupariae is the cause of this problem. It strikes both sides of the plate. On the surface of the leaves, gray spots with a dark border are formed. They can be either correct or not correct. They often combine and form huge spots that are capable of covering most of the plates. On the affected areas, which are located on the top of the leaves, there are pycnidia in the form of black small dots.

It is one of the most common diseases caused by the fungus Fusicladium orgiculatum. Scab appears in the form of spots that are located on both sides of the plates. They have a brown tint and radiant edges. Often the edging is irregular, but there are spots with perfectly straight edges.

If you do not fight with such a disease, then the tree will quickly lose its attractiveness. The second stage of development of the fungus Fusicladium orgiculatum is the presence of olive bloom on brown spots.

The scab develops most actively during the period of heavy rains. She also feels good in heavy fogs, as a result of which the humidity of the air rises..

Such a disease manifests itself in the spring. Greenish rings are formed on the leaves. With a large number of them, a mosaic pattern appears. If the deciduous plates are severely affected, then they begin to deform and fall off..

Diseases of the trunk and shoots

Various diseases affect not only the leaves of mountain ash.

Pathogens that infect a plant penetrate into the tissues through damaged areas of the bark. The main sources of this disease are infected trees and bushes. Fallen and unharvested leaves, in which such a pathogen lives, can also cause necrotic diseases..

If young shoots have such a problem, they often disappear. Especially if the temperature is high on the street for a long time and precipitation in the form of rains is not observed. Also, necrotic diseases develop in the case of polluted air or as a result of an incorrectly selected site..

This disease is often called tubercular necrosis. It appears as a result of the fungus Tubercularia vulgaris. It is almost impossible to immediately identify this disease. This is due to the fact that the shade and structure of the bark does not change in the early stages..

Non-crestal necrosis appears in the form of pink pads with small cracks in the bark. They are often smooth and round. In diameter, such formations grow from 0.5 to 2 mm. Such growths are formed during the year, but infection occurs only during the growing season..

This problem manifests itself in the form of oval formations that have a yellow tint. They are formed only on the bark of a tree. This necrosis grows very quickly. The result is a huge spot that can cover most of the shoot..

In the spring or summer period, mucus is released from such pads. It has a dense structure, so it does not dry out, but solidifies in the form of drops. 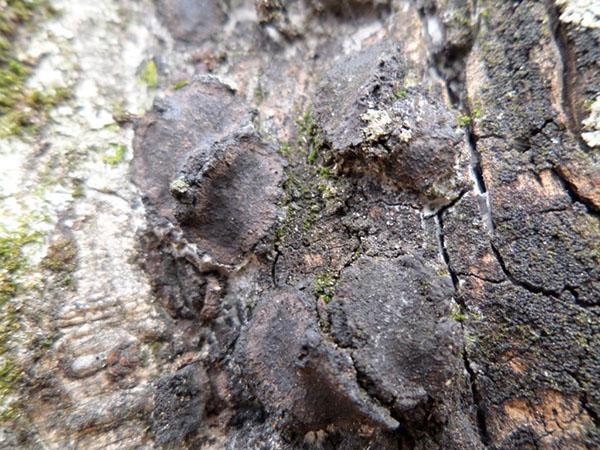 This type of necrosis affects different types of mountain ash. It affects the bark of both young and adult trees. This problem manifests itself in the form of cracks in the bark. If you do nothing, then over time it will begin to flake off and fall off..

All of the above diseases of mountain ash, often appear as a result of weakened immunity of the tree. The reason for this is improper plant care, sharp temperature fluctuations or prolonged drought..