Planting ziziphus at their summer cottage 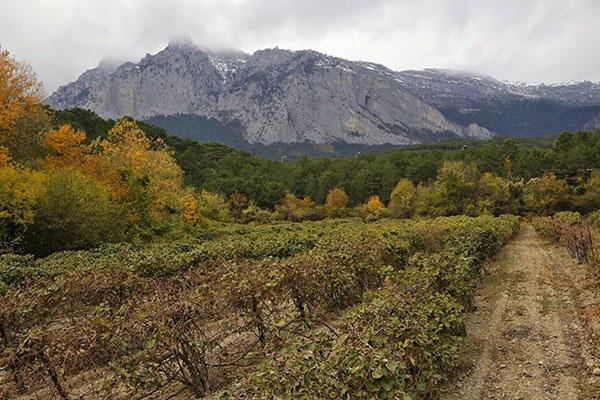 Ziziphus grows naturally in Asian countries. This culture is very drought-resistant and unpretentious to care for. Due to its sweet fruits and high yields, the Chinese date quickly spread to the Americas and the Mediterranean. In Japan, this culture is usually called “unabi”, in other countries it is called “zhuzhuba”.

In 2016, on the southern coast of Crimea, a plantation of exotic trees was established, which occupied almost 6 hectares. Growing and caring for ziphus in Crimea does not present any particular difficulties, since the climatic conditions of the peninsula are completely suitable for the growth and fruiting of Chinese dates.. 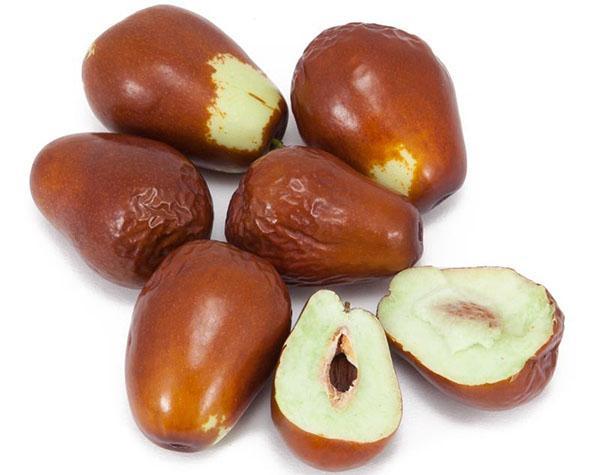 The plant belongs to the buckthorn family, its fruit is a brown or burgundy drupe. The fruits of the shrub are similar to dates, but their size is slightly smaller. The pulp of the fruit is yellow, the stone resembles an almond in shape.

In the CIS countries, the Chinese date is not widespread. It is grown in some suburban areas, the owners of which are fond of exotic. Therefore, not many gardeners know what a ziziphus is. This is a very useful plant, the fruits of which are widely used in the treatment of many diseases..

The homeland of the jujub is China, where the fruits of this culture are used in folk medicine. The beneficial properties of the fruit were noticed in ancient times..

The Chinese date is called “breast berry” because it treats lung and heart diseases..

In the sanatoriums of Yalta, hypertension is successfully treated with the fruits of the Chinese date. Unabi fruits contain a large amount of magnesium and potassium, so their use has a positive effect on the heart muscle..

The advantages of ziziphus for gardeners 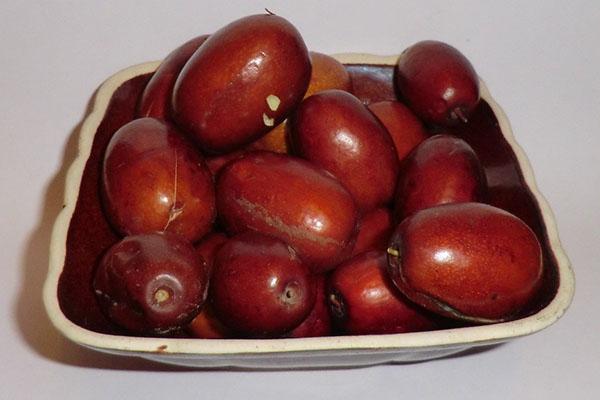 Gardeners cultivate Chinese dates due to their high yields. On an adult bush, up to 300,000 flower buds are formed. Even with poor pollination, a three-year-old shrub yields up to 15 kg of berries. If you plant several bushes on the site, the yield will increase many times due to cross-pollination. An adult ziziphus bears up to 50 kg of fruits.

The root system of the Chinese date extends into the soil up to 3 m, so the plant can do without watering for a long time. The bush receives all the necessary moisture from the soil. Among the advantages of unabi are: 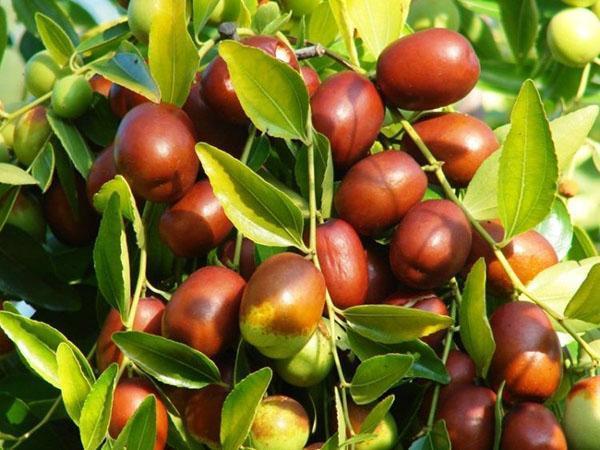 Planting and growing ziziphus is no different from most garden plants. The main condition for the rooting and survival of a seedling is to find a suitable place for this culture..

It is important to remember that the ziziphus bush, although unpretentious to the composition of the soil, the plant responds well to feeding. You can plant a seedling in a sandy loam fertile soil, the plant takes root well on crushed stone aerated soils. 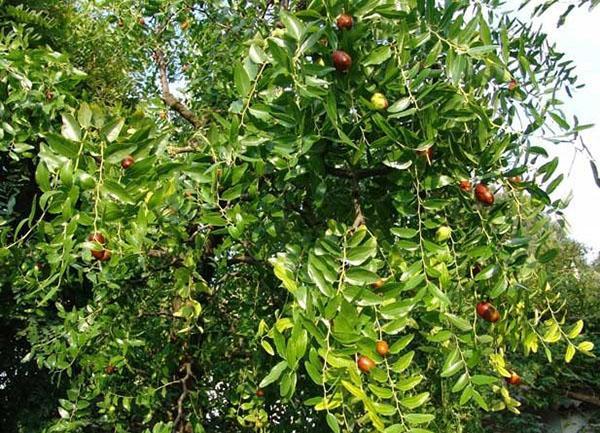 Ziziphus is a light-loving plant, so you need to choose a sunny place to plant it. Even with the slightest shading of the plant, its yield drops significantly.

The root system of the shrub is very developed. In the first year after planting a seedling or a grafted seedling in open ground, the growth of the aboveground part of the plant slows down significantly. Ziziphus unabi spends all the nutrients on the development of the root system. Adventitious roots spread 7 m around the shrub.

Due to the developed central root, jujuba cannot be planted in swampy areas and in areas where groundwater is located close to the soil surface. The root system of the bush rots with stagnant water.

The aerial part of the plant begins intensive development in the second year after planting. On fertile soil, the shrub will bloom in June of the same year, but the fruits will form only in the third year.. 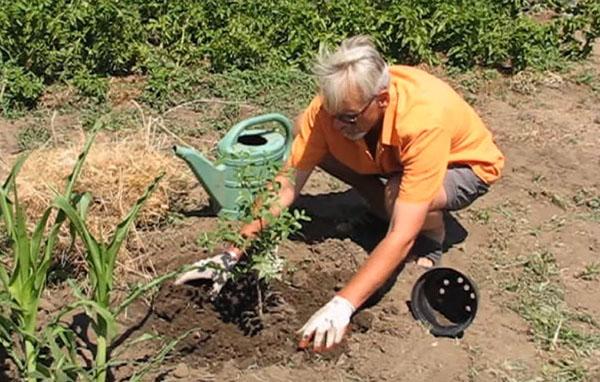 Planting and growing ziziphus does not differ from planting the usual fruit crops. A planting hole is dug under a seedling or a plant grafted onto a wild stock. It is filled with a mixture of garden soil and leaf compost in equal proportions..

The metabolism of the Chinese date is very slow, so the vegetative buds bloom on the May holidays. A plant with an open root system is planted in the ground in late May or early June.

When transplanting a seedling into open ground, the root collar of the plant is not buried. In this case, the jujuba will give a large amount of growth, which can be used to propagate this culture..

If you are planting a cultivar of Ziziphus grafted onto a wild stock on the site, do not be afraid to deepen the root collar. Unlike other fruit trees, this will not affect the yield of the Chinese date, but will only benefit:

After planting ziziphus unabi in open ground and its first flowering, you can begin to form the crown of the plant.

Pruning and shaping the crown of a Chinese date 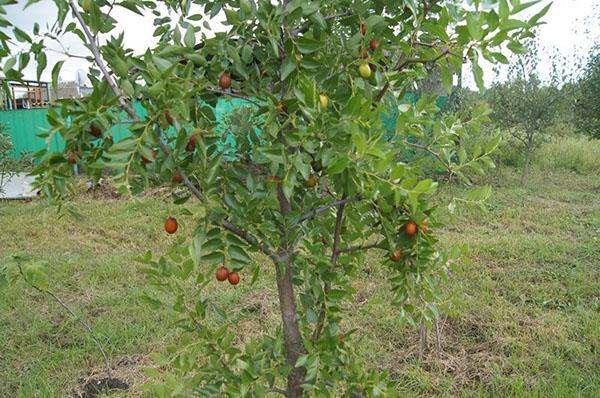 Ziziphus has a strong immune system, so the plant is not prone to infection by fungal and viral diseases. Only formative pruning is carried out: branches that grow inside the crown are removed.

There are two ways to form the crown of a plant: like a ziziphus tree and like a shrub. In the first case, all shoots on the main trunk are removed, leaving three to four skeletal branches at a height of 50 cm from the soil surface. In the second method of formation, the lower branches are not completely cut off, but only shortened, giving the bush a neat shape.