Radish varieties in a summer cottage 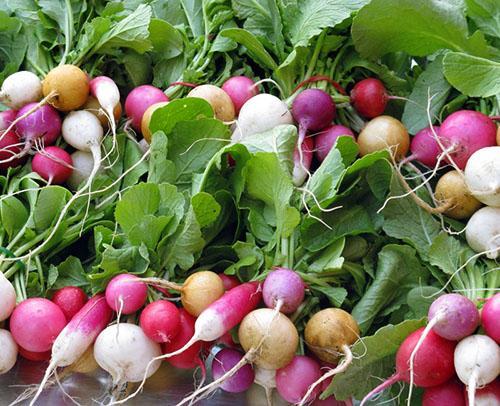 The radish, which appeared in Europe thanks to Marco Polo, who studied the life and customs of the peoples of China, is one of the many varieties of sown radish and is an annual vegetable crop recognized in many countries of the world..

The main value of the radish is a juicy root vegetable of a rounded or elongated shape, thanks to which the vegetable got its name, which comes from radix, which means “root”.

Since the 13th century, when the inhabitants of the Old World got acquainted with a new garden plant, many interesting varieties of radish were bred. If the still found wild-growing radish practically does not form a root crop, the color of the rhizome is not pink or red, but whitish, then cultivars compete in a variety of shapes and colors.

In the beds, you can see radish roots covered with thin skin, painted in all shades of pink and red, as well as white, yellow and even purple radish roots..

In Russian vegetable gardens, radish is one of the earliest vegetables and is valued for its early maturity, frost resistance and fresh slightly pungent taste, which the culture owes to the presence of mustard oil in root crops.. 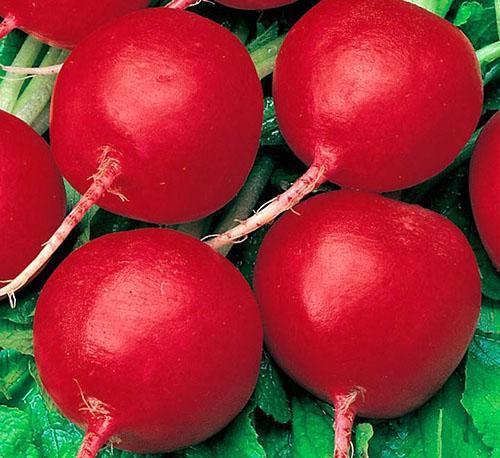 This early ripening variety is one of the oldest. Radish Heat was obtained at Vitenskaya OSS in the Baltic States in the middle of the last century and by 1965 it was zoned in many regions of the country..

From the appearance of the first shoots to the collection of juicy root crops, it takes from 20 to 30 days, while a square meter of planting of this radish variety can be harvested weighing up to 2.8 kg. Under the dark red surface of the root crop, there is a white or pinkish juicy, without voids, pulp with a sweet, moderately pungent taste. The weight of a rounded or elliptical root crop of the Heat radish is 15–27 grams. The rosette is powerful, spreading, radish is almost completely hidden in the soil. This radish variety is good when grown under plastic.. 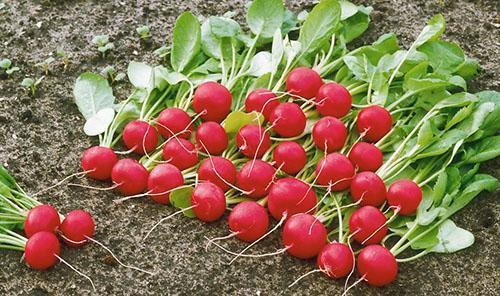 Hybrid radish Dabel F1 yields a harvest within 18–20 days from the moment of germination. The peculiarity of the plant is an extremely compact rosette and well-developed large roots with a uniform dense white pulp and a taste of medium pungency. The culture is frost-hardy and not sensitive to frost.

The development of root crops continues even at low temperatures. With delays in the harvest of radish, voids are not formed inside the root crops, the consistency does not remain dense and crispy. There were no cases of shooting or cracking of the Dabel F1 radish. The yield of the variety depends on the planting density. If an interval of at least 5 cm is observed between the plants and the soil moisture is maintained, the foliage does not stretch, the roots are formed large, even, with excellent marketability and taste..

Radis Dabel F1 is suitable for both personal use and for sale. Early ripening high-yielding radish is suitable for growing in all types of greenhouses, under film and in the open field. 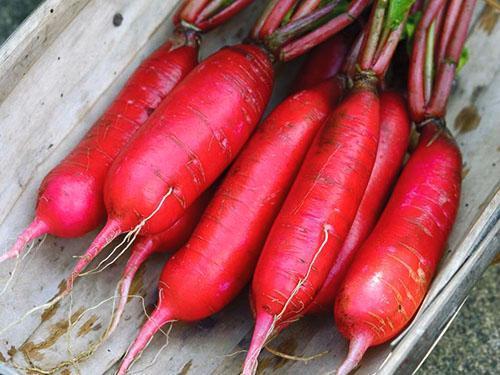 The medium-term radish variety was bred in the Far East and, in the middle of the last century, was zoned not only in this region, but also in the European part of Russia, as well as in the North Caucasus..

The period from sowing to obtaining root crops of the Red Giant radish variety, depending on the region and weather conditions, ranges from 34 to 50 days.

Up to 4.2 high-quality radishes are harvested from a square meter of a garden bed. The Red Giant radish has a fairly spreading large rosette. Root crops have a rich red color, on which transverse pinkish barbs are noticeable. Radish has an elongated cylindrical shape and, with a length of up to 13 cm, can weigh from 45 to 80 grams. White pulp of a weak pungent taste, does not lose juiciness and pleasant density and excellent taste for a long time.

The variety is frost resistant and suitable for outdoor use. Arrows are not observed on plants of this radish variety. In a refrigerated storage facility it retains its properties and commercial qualities for up to 3-4 months. 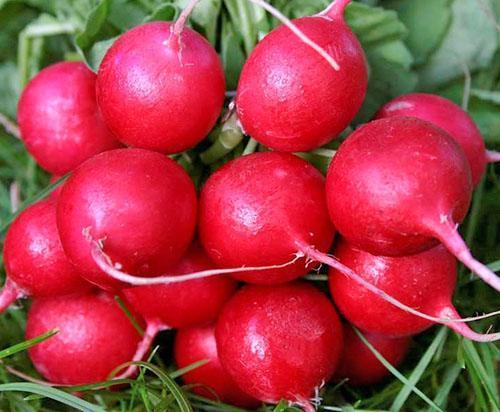 The Cheriet F1 radish hybrid, which gives large early root crops, was obtained by Dutch breeders. Subject to agricultural technology and favorable weather conditions, if the plant is cultivated in the open field, the radish yields a harvest 18 days after the emergence of seedlings above the ground. Plants are excellently grown both in the beds in warm weather and throughout the year in greenhouses. Root crops are large, even, with a dense consistency without voids and excellent taste. The diameter of a dark red rounded root crop reaches 6 cm.

Radish hybrid Cheriet F1 is distinguished by resistance to the formation of flower arrows and low greenery. Recommended distance between plants 5-6 cm. 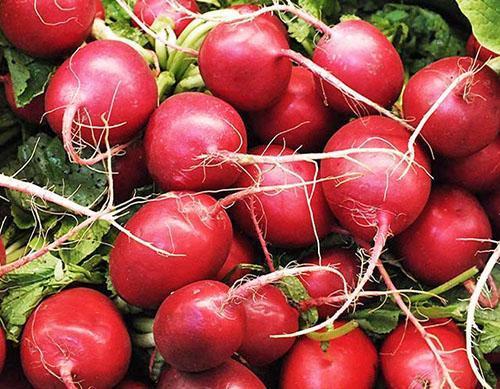 The early ripening hybrid radish Celeste F1 gives the first root crop after 23–25 days. The crop is distinguished by high commercial characteristics. Root crops are even, round or slightly elliptical in shape. The radish variety attracts attention with the bright red color of the surface of the root crops and their snow-white dense pulp with a pleasant pungency and good taste. The average root diameter is 5 cm.

The all-season Celeste F1 radish grows both on open plantations and under film shelters. No cracking or sluggishness of the pulp is observed. 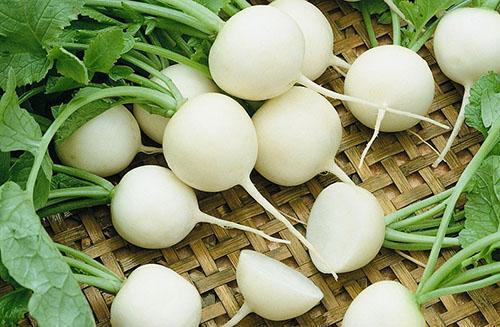 The early ripe variety of white radish Mokhovsky is worthy of attention not only because of the snow-white pulp and the same skin color. The first rounded roots of this variety can be obtained in 19-31 days. From 0.7 to 1 kg of root crops are harvested per meter of the plantation.

The socket is upright, raised above the ground. Root crops up to 4 cm in diameter and weighing up to 23 grams are 70% submerged in the ground, easily pulled out. 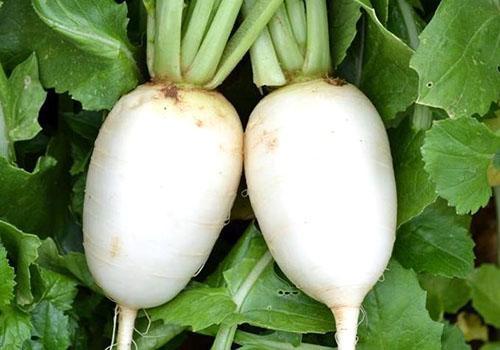 Mid-season radish Autumn giant is ready to harvest in 25-29 days. The peculiarity of this unusual variety is very large white rounded or egg-shaped root crops weighing up to 150 grams. The average length of the root crop is 8 – 10 cm, the pulp of the Autumn Giant radish is white, juicy, delicate and has a bright taste.

Root crops of this radish variety are stored for up to five months, practically without losing their density and taste, so even in winter they can be used fresh. It is better not to leave root crops that have reached maturity in the soil, since they coarse and lose the flavor inherent in the variety..

In appearance and qualities, this white radish is very similar to another type of sown radish – daikon. If in Europe the most popular of all varieties of radish is radish, then daikon, called Japanese or Chinese radish, is a culture loved in the East.. 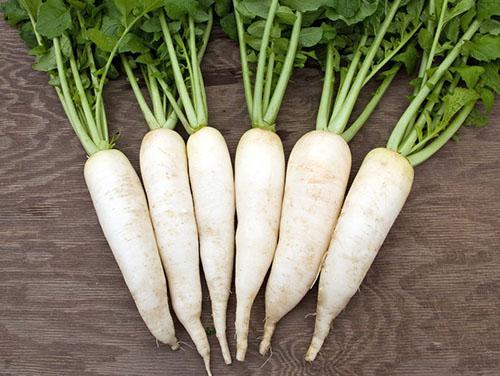 You can distinguish daikon root vegetables from white radishes by the absence of the famous spicy taste. There is no mustard oil in the pulp of daikon, but there is a special aroma. The shape of the foliage in two closely related crops also differs. Unlike white radish, daikon leaves are excised and larger.

The name of daikon is translated from Japanese as “big root”. Indeed, the roots of this culture, which is gaining popularity in the Old World, grow up to 60-70 cm in length, and reach a weight of 500 grams to 3-4 kg. 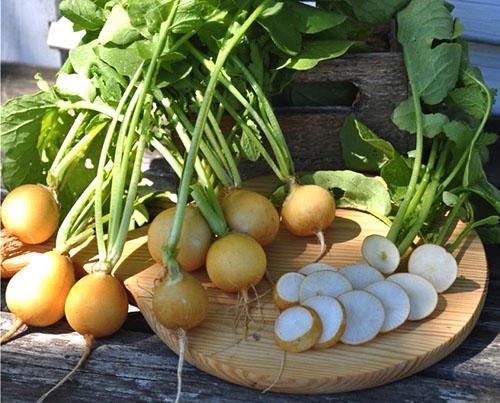 In addition to white radish, in the modern set of varieties of this culture there are also varieties of other interesting colors. Yielding in 20-22 days, early amicable harvests, the Zlata radish variety strikes with yellow round-shaped roots. At the same time, the pulp is white, has a crispy, juicy consistency. The variety is high-yielding, tolerates a lack of moisture well, and with good watering and care, by the time of harvest, the roots of this radish variety weigh 10–12 grams, and after a week the weight increases to 20–24 grams. Maximum radish weight – 60 grams.

Root crops of the Zlata variety have high commercial qualities that persist for a long time after harvesting.. 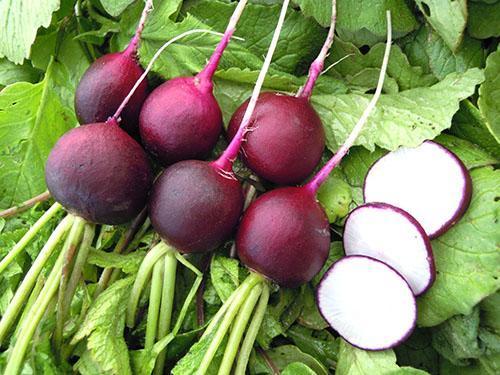 The Malaga radish variety is distinguished not only by the early technical ripeness of root crops, but also by their purple color. The harvest is formed amicably, the roots are even, rounded, weighing from 16 to 20 grams are stored for a long time after digging, without losing their dense crispy consistency, juiciness and sharp fresh taste.

In dry weather, the Malaga radish does not form an arrowhead and can be grown from early spring until frost.

Autumn sowing can be used for harvesting for subsequent storage and use of products for 1-1.5 months.

Video about the best varieties of radish