Photos and descriptions of different types of radish 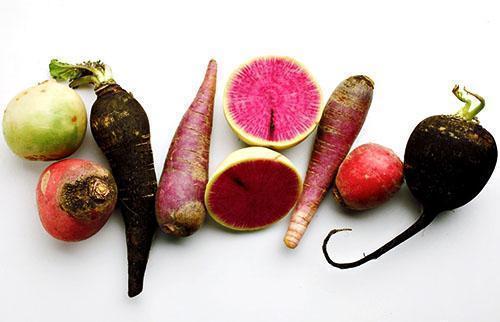 Garden or sowing radish is widespread in the world, especially in Asia, Europe and the countries of Central and North America. The genus Raphanus sativus includes several closely related species that have both many common features and significant differences..

For the most part, these are biennial plants, in the first year giving a root rosette of leaves and a root crop of various colors and sizes. And although it is precisely the receipt of root crops that is the purpose of growing many types of radish, some varieties, for example, wild radish, do not have them, but the plants have other important advantages..

The appearance of peduncles in the first year of a plant’s life for vegetable varieties is considered a serious disadvantage, but in the case of serpentine and oil radish, it speeds up the plant’s development cycle and allows you to get seeds in one season.

All types of radish have lyre-shaped leaves, which can be either whole, like a radish, or strongly dissected, feathery, like a daikon and Chinese radish. The resulting roots can be both round and elongated, reaching a length of 60 cm. The color is just as varied. If black radish, as the name suggests, has a dark gray, brown or almost black surface of the root crop, then daikon is called a white radish for a reason. Radish – the most common type of sowing radish has the most gamut of shades. Today, breeders have bred varieties that give root crops of red, white, purple and even yellow. And Chinese radish can delight gourmets with root vegetables with white, traditionally green and bright pink pulp..

Read also the article: what is the use of radishes for humans? 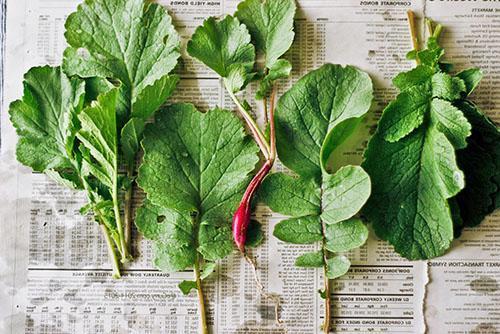 When the stem appears, the buds are located in the upper, branched part, and the flowers can be either white, yellowish or purple. And the rounded brown fruits ripen in thickened pods.

Descriptions and photos of different types of radish will help you better understand the cultivated and wild-growing representatives of the genus, as well as choose a new garden culture for your own plot. 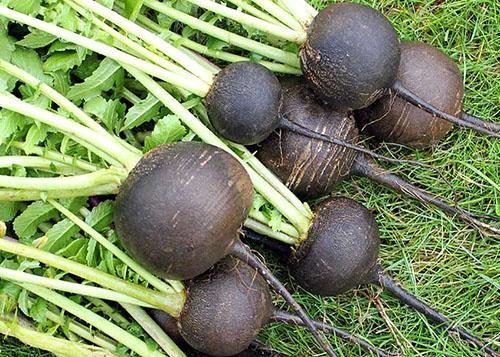 Black radish, cultivated in Asia and Europe since ancient times, develops in a two-year cycle. In the first summer of the year after sowing, the aboveground part of the plant consists of a lush rosette of leaves, and a rounded or, less often, an elongated root crop weighing from 200 grams to 2 kg is formed underground..

As you can see in the photo of the radish, a distinctive feature of this culture is the unusually black surface of the root crop. The second feature can be felt only by tasting a slice of white dense radish pulp.

No other species has such a sharp, bitter taste inherent in black radish and appears due to the abundance of phytoncides and mustard oil glycosides.. 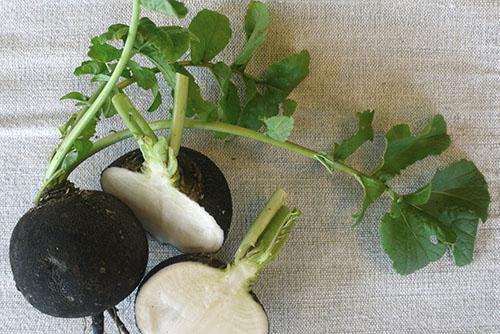 In the second year, in May, black radish blooms and after a month, brownish seeds of an irregular round shape ripen in pointed thickened pods with a loose parchment inner layer. Like all representatives of the genus, the black radish has an erect stem from 40 to 100 cm in height and small flowers with four petals.

The harvested black radish root vegetables are eaten fresh, pickled and dried, and can be stored in refrigerated storages for several months.. 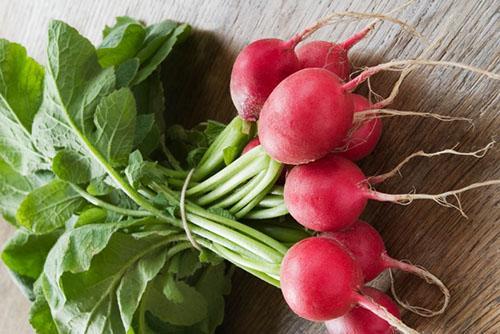 Since radish is also one of the varieties of sowing radish, the name “red radish” is quite applicable to the root crops of this culture. Presumably, the first varieties of cultivated radish were obtained in Asia, although wild plants have not been found today. The closest ancestor of this popular plant can be considered an oriental variety of wild radish with purple flowers, still found in the coastal regions of Japan and China..

They eat not only juicy, thin-skinned radish roots, but also young tops..

The shape, color and size of radish roots are very different. As in the photo of the radish, round, oval and noticeably elongated radishes can be red, white-pink, completely white, yellowish like a turnip and bright purple. The roots of this vegetable crop are juicier than black radish, while the taste of the radish is much softer, although it has a pleasant pungency.. 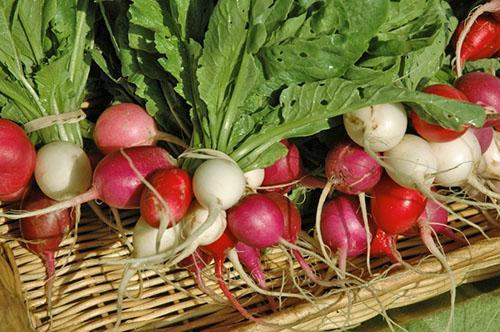 Radish is highly regarded by gardeners all over the world as an early vegetable crop, sown both in open ground and in greenhouses. Moreover, the early maturity of this species is so high that edible, juicy roots grow in 20–35 days.. 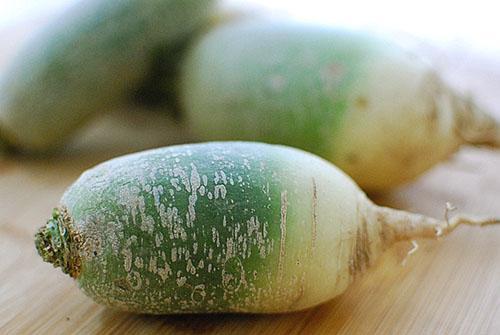 Chinese or green radish, in the East it is often called pinyin or lobo. The culture gives large, juicy roots of an elongated or rounded shape, which are completely green, white-green, pinkish or lilac in color. Some varieties with a pink or reddish skin tone are very reminiscent of radishes, although incomparably larger.

You can distinguish the Chinese radish by the green, close to the leaf rosette of the apical part of the root crop.

Root vegetables of green radish contain many useful substances, they are rich in mineral salts, fiber and sugars. At the same time, lobo is good in salads and other dishes, since its taste has almost no pungency. For culinary purposes, this type of radish is used not only fresh. Root vegetables are marinated, fried on the grill, chips are made from slices and used to fill pies.

Especially popular in the countries of America and Europe are gaining varieties of Chinese radish, as in the photo, with an unusual red or pink core. This variety is called watermelon or red radish, although the roots can be green or white on top.. 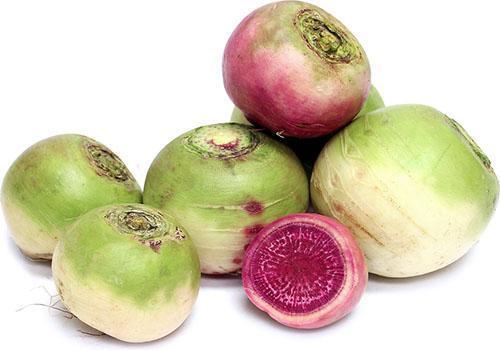 When growing green radish, special attention is paid to watering, removing weeds and combating excess planting density, since a lack of moisture and light leads to the appearance of peduncles. To obtain large, even root crops, the culture needs nutritious soil, but sowing radish is better in summer, when daylight hours are already waning.. 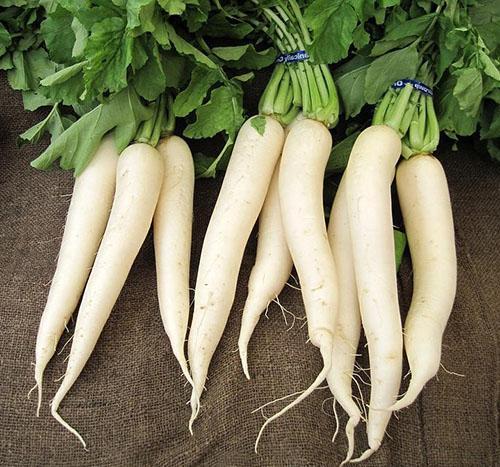 The Japanese daikon radish, according to botanists, comes from the Chinese lobo variety and was obtained through a long selection of the most juicy, tender root crops of an elongated sowing shape. Indeed, modern daikon varieties do not contain mustard oils, and when eating root crops, in contrast to black and green radish, the pungency is not noticed at all.

With proper care of the daikon, the nutritional value and looseness of the soil, irrigation and top dressing, the root crops of the radish, as in the photo, grow to a length of 50-60 cm and can weigh from 500 grams to 3-4 kg. 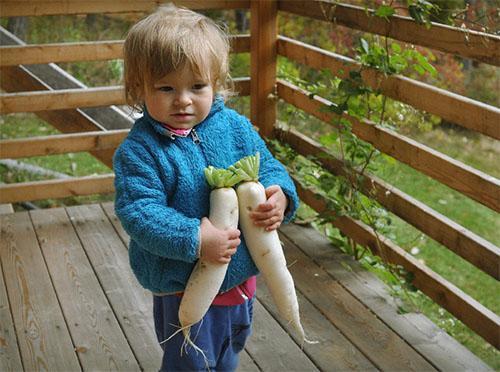 For the development of such a large root crop, the plant takes significantly longer than radishes and even Chinese radishes. The vegetative period of daikon is 60-70 days. 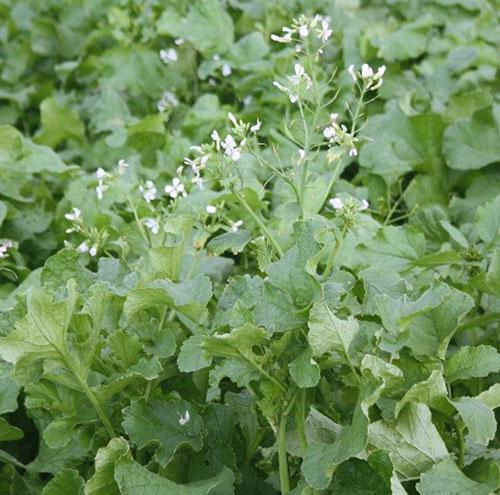 Among the series of photos and descriptions of different types of radish, you can find plants that do not produce root crops, but are actively used in agriculture. Oil radish is one such crop. It is an annual plant with a height of 80 cm to 1.5 meters, grown as an unpretentious, fast-growing green manure in many regions of the world..

Only 35–45 days pass from the emergence of oil radish sunrises to the flowering period, so during the warm season the plant can be sown up to two or three times. Oil radish grows easily in the shade and on almost any soil. At the same time, plants quickly accumulate green and root mass, contributes to loosening the soil and the accumulation of nutrients and minerals.

The crushed green mass of oil radish is a good raw material for compost and a natural fertilizer that goes into the soil before winter. The crops of this type of radish can be combined with legumes, which allows the soil to be naturally enriched with almost two hundred kilograms of nitrogen per hectare..

The photo of the radish shows how powerful this plant is. Therefore, with the help of this culture, it is possible to combat such intrusive weeds as wheatgrass. Oil radish is used when a site is infected with nematodes. Plants can suppress these dangerous pests. 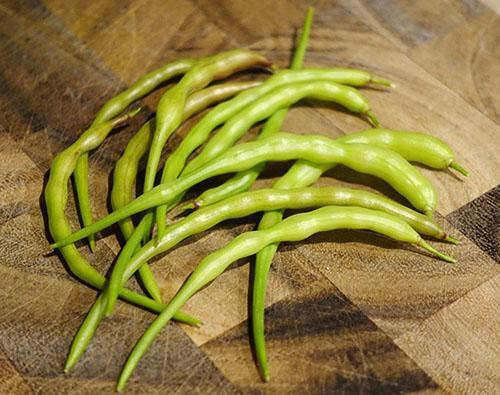 For Russian gardeners, this type of radish is a real exotic. Serpentine radish or pod radish gets its name from the long, often bizarrely curved pods that are used for food..

Annual plants, in height not exceeding half a meter, do not form a root crop, but after the lilac flowers fall off, fleshy single-chamber pods-fruits begin to develop, length, depending on the variety, from 50 cm to 1 meter.

However, the plant gives such giant fruits only in its homeland – on the island of Java and in Ceylon. Pod radish is also grown in India. In Russia, radish pods, as in the photo, reach 10-15 cm in length. You can eat outlandish fruits with a moderately pungent taste fresh, boiled and pickled., 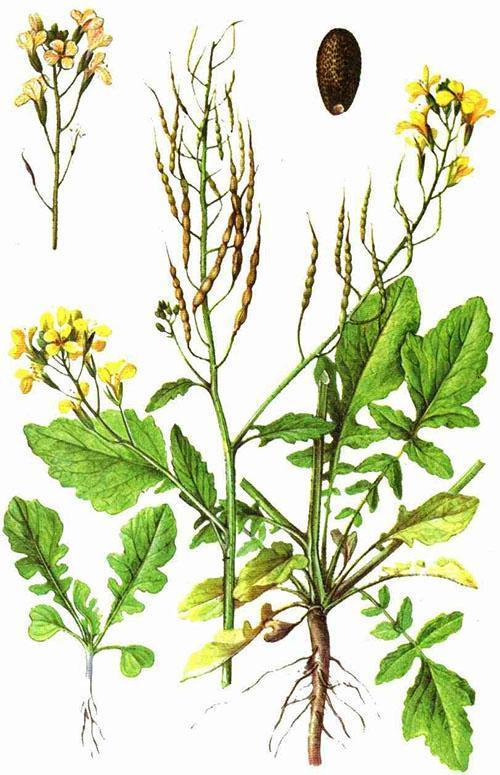 Wild or field radish grows practically throughout Europe, and in the temperate latitudes of Asia, and is also found in North Africa. Wild radish is a herbaceous annual plant with a dense core 30 to 70 cm in height and a powerful taproot.

The culture growing on empty lands, along roads and outbuildings is a good honey plant, but for this purpose it is practically not used. But wild radish is practically the only species of the genus Raphanus sativus, considered a weed plant, from which crops of winter crops, cereals and vegetables suffer.. 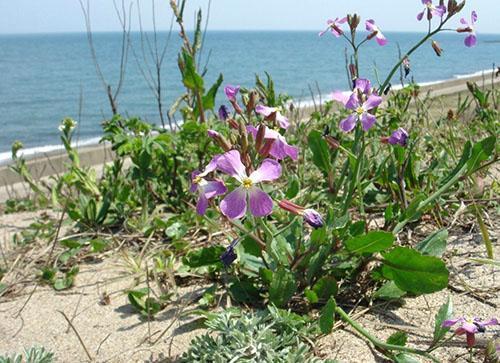 The flowers of this type of radish in European plants are often whitish or yellowish. But on the eastern wild radish, sometimes called the coastal radish, lilac or almost purple flowers are revealed, collected in rare brushes located at the tops of the shoots.

We understand the varieties of radish – video