Planting and caring for radishes in the garden beds 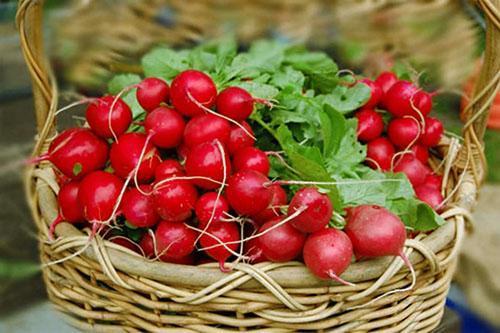 Radish is the earliest root crop, which acquires a marketable appearance in 20-40 days, depending on the varietal timing of product receipt. Planting and caring for radishes is straightforward, even in the absence of experience in gardening. To have a root vegetable on the table all summer, you should use some special tricks.. 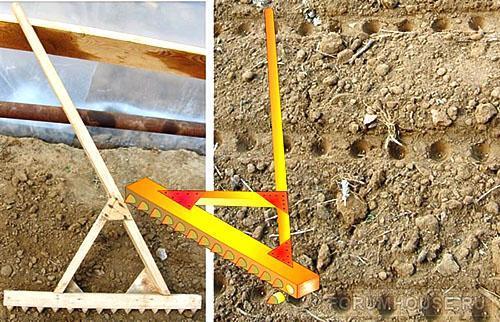 When growing radish, you need to know the following features:

For planting and caring for radishes in the open field, choose an illuminated area. Before sowing, the soil is filled with rotted manure, complex mineral fertilizers and well dug up. It is better to prepare the garden in the fall, and sow in the winter or early spring. It should be borne in mind that the seeds are placed in the grooves to a depth of 1 cm and the earth above them is compacted.

For continuous plantings, it is better to use a marker with 5×5 cm teeth. Then the seeds are placed at the same distance with an even depth and compaction. Seedlings appear at the same time, thinning is not required. Each gardener chooses how to plant radishes. You can sow a separate bed, make markers from seedlings for tightly similar crops or stick along the edges of beds with other crops.

By sowing seeds with different ripening periods, you can get products from one garden bed within a month. So, the French breakfast radish will delight you with tender crispy pulp 20 days after germination, and the Ice Icicle will have market ripeness in 45 days. Thus, you can have fresh radishes on the table within a month from one sowing date.

How to harvest early radishes 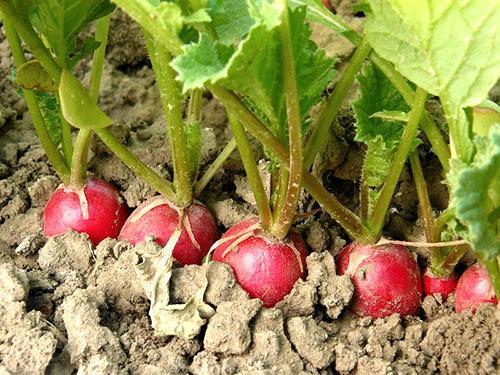 In order to have your favorite root crop in May, you need to take care of this in advance. An open place is selected on the site for early planting. Later, it will be possible to plant thermophilic crops here. There are several ways to grow your first crop radish outdoors. For sowing, you need to choose fresh large seeds of early ripening varieties. Seeding rate 2-3 g / m 2. Sowing seeds, depending on the region, is carried out at different times – in winter or early spring under a temporary shelter.

Podzimny sowing is carried out with a steady onset of cold weather in pre-prepared furrows. From above, the sowing is covered with thawed soil prepared in advance. In spring, the seeds will hatch early, as shoots appear at 2-3 degrees and withstand return frosts up to 6 degrees. Another way is winter sowing. In the middle of winter, snow is removed from the garden, seeds are laid out along the furrows and covered with peat with a layer of 2 cm. 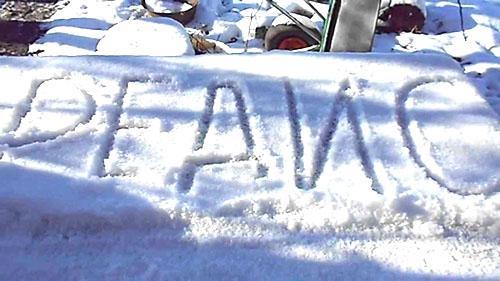 Sowing radishes before winter and in winter allows you to get the first harvest a decade earlier than with the spring planting method. The area with early seedlings is covered with a decrease in temperature, but more often a temporary shelter from arcs is installed above such a bed.

If the early radish is grown as a business, the best way is to sow the seeds using a marker and 40-50 cm spacing between strips with continuous sowing. This crop placement will provide plant maintenance. The entire area is covered with a foil frame with ventilation. Early sowing on prepared soil is done when the ground has thawed by 2-3 cm.If the morning frost on the soil was stronger than three degrees, the plants are watered and shaded before the sun’s rays touch the plant. Radishes grow quickly if they have enough moisture and sunlight. Root crops are sampled gradually, as they ripen.. 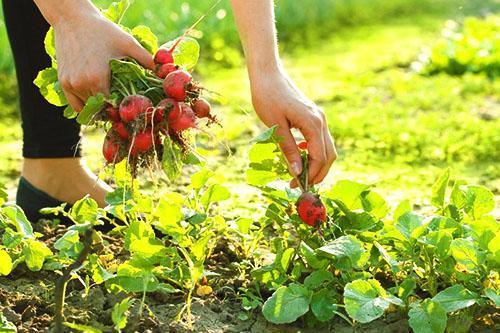 Sowing radishes during the summer

Sowing of early varieties is more often used at several times, every summer month. How to grow radishes at the height of summer, when daylight hours are longer than 12 hours? Radish should go into the arrow at the height of summer precisely because of the illumination regime. Therefore, in the summer, they artificially shorten the day, covering the garden with radishes with dark geotextiles in arcs. It is impossible to cover with a film, as the sun will create unbearable heat under the shelter. It is necessary to illuminate the garden for 10-12 hours, only then can you get root crops, and not an arrow with seeds. 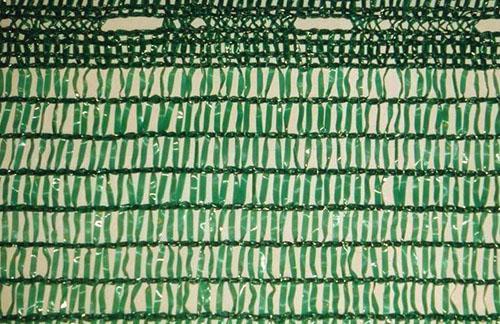 Summer heat interferes with floods, dries up the earth, promotes the appearance of pests that eat up leaves, gnaw through roots.

In summer, the bed should be damp, loose and constantly sprinkled with wood ash or tobacco dust. No insecticides can be used on early-maturing crops..

When to plant a radish for the second time depends on the willingness of the owners to maintain a light regime for it every day. If it is possible to provide watering and daylight hours, at the height of summer, the root crop can be grown using non-shooting varieties. But on hot days, the filling is weak. In the shade, the radish will release a lot of green at the expense of the head size. Sowing radish seeds in June is irrational.

Planting a radish in July is more in line with its biology. In the second half of the month, the heat subsides, the sunny day is shorter and the night is colder. Therefore, in August, they get a new wave of delicious root vegetable. Planting and caring for radishes in the open field ends at the end of September, when large root crops of late varieties are harvested for winter storage. 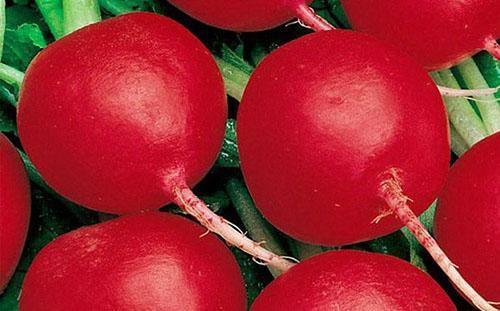 To get radishes in September, planting radishes should be done in early August. The beds that have been freed from onions for turnips are the best fit. They are well fertilized, loose and there is enough time before the onset of cold weather to obtain a marketable radish. Planting radishes in August and early September is practiced in areas with a warm climate. There, the favorable development of root crops is ensured even at the beginning of October. Trans-Urals should finish growing in the first half of September. These climatic conditions are based on planning the timing of sowing radish seeds for storage.. 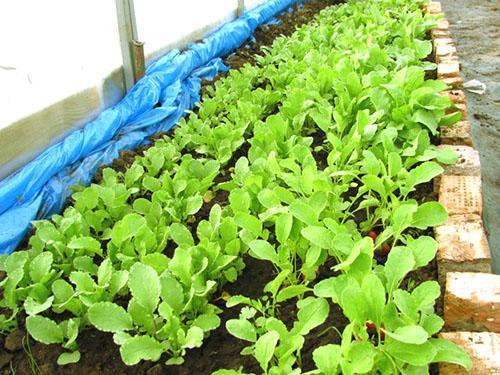 The Siberian climate does not allow for the first crops before May. Therefore, the greenhouse method of growing radishes in spring is widespread in this area. Radishes are the precursor to tomatoes and peppers in stationary greenhouses. Sowing it is done in April in order to get the first root crops by mid-May..

When cultivating radishes in a greenhouse, it is important:

If you do not follow the conditions for planting and caring for the radish, a lot of greenery will grow to the detriment of the root crop, but the leaves of the greenhouse radish are tender and suitable for making salads.

In Japan, radish leaves are considered the most valuable vitamin greens and they are eaten.. 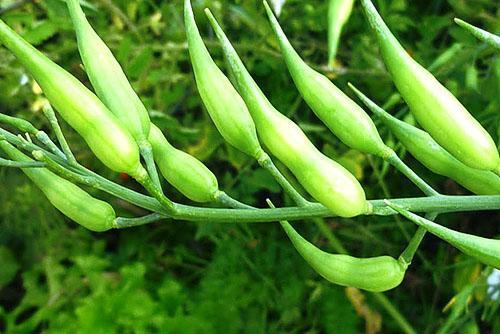 Radish is an annual crop, so you can get the seeds yourself. For this, testes are grown through seedlings. Testes grown in containers are rarely transplanted into open ground, after 30 cm and row spacing of 70. Plants are fed with phosphorus-potassium fertilizers and are protected from insect pests.

The pods obtained on the bush turn yellow in September. Such stems are cut, ripened and dried for two weeks and threshed. In Siberia, a seed plant is grown in a container, in September, it is brought into a greenhouse and grown indoors. The threshed seeds are calibrated, leaving only large.

Video about a little trick when planting radishes