A brief overview of garden and ornamental plum varieties 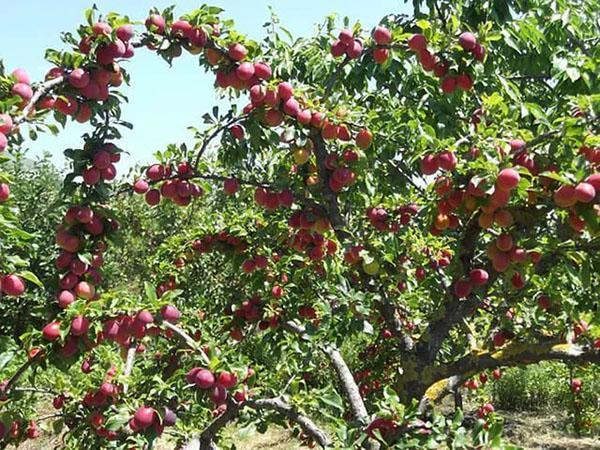 When choosing a plum tree sapling, every gardener knows that desire alone is not enough. In order to grow a strong tree and get a bountiful harvest in the future, it is necessary to consider the advantages and disadvantages of each variety of plums. A brief description of the most popular varieties of plums will help to determine the choice of type. 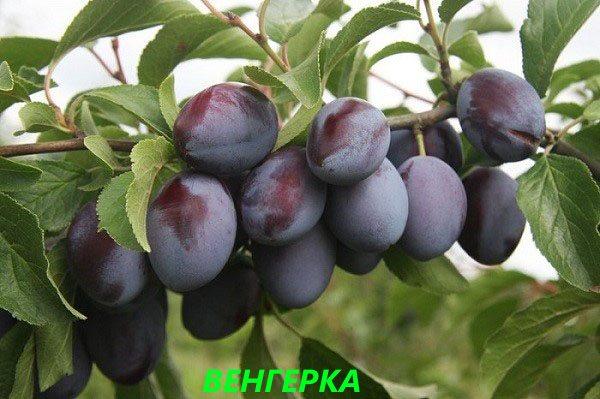 It includes a large group of homemade plums, the common feature of which is the characteristic of the fruit, namely:

Representatives of the variety are Moscow, Belorusskaya, Izumitelnaya, Donetskaya and others plums. All of them are characterized by abundant productivity and self-fertility. The seedlings tolerate drought well, and the fruits are well transported and stored..

A mature tree has an oval crown and grows up to 6 m in height, which makes the process of maintenance and harvesting difficult. Fruiting occurs only at the age of 7.

Only from the Hungarian plum can you make high-quality real prunes. 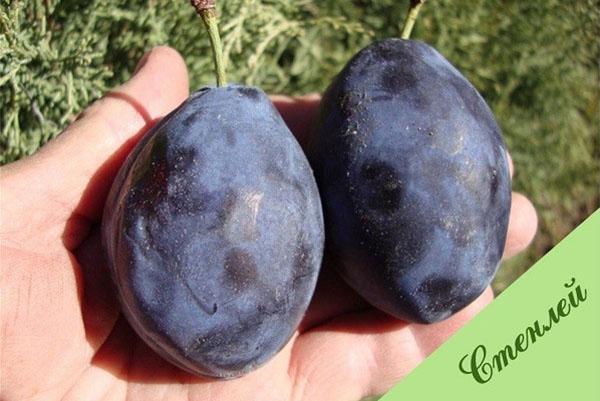 A late-ripening variety, the second name is Stanley, is widely used in the southern regions. Has a characteristic round crown with sparse lateral shoots. The maximum height of the tree is no more than 3 m. The fruits are large (sometimes up to 50 g), dense and aromatic, slightly sour. Ripen in early autumn for the 5th year of planting. Productivity is good – about 60 kg can be removed from one tree.

The variety can bear fruit alone, since it is partly self-fertile. As additional pollinators, it is better to plant Bluefri or Chachakskaya plums on it..

Stenley plum is an excellent pollinator for varieties with which it has the same flowering time.

The winter hardiness of the variety is at a high level, but it is not resistant to gray rot disease and damage to plum aphids.. 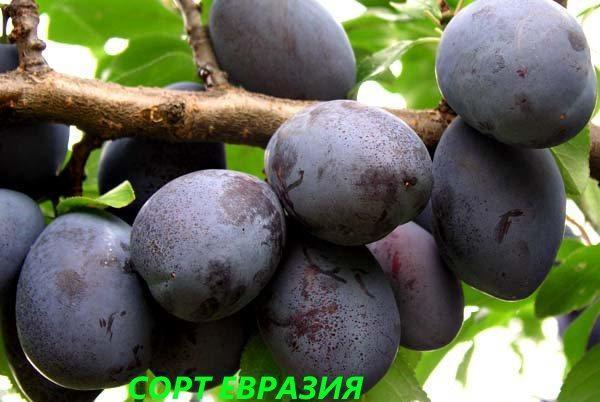 An early table variety that ripens at the end of summer. A young seedling in 4 years grows into a large tree with a lush crown and begins to bear fruit. The cream is round and medium in size (about 25 g), the yield is good. Due to the very juicy pulp, they are great for preservation or fresh consumption, but it should be noted that the stone is difficult to remove. The variety has earned great popularity among gardeners due to its high winter hardiness and resistance to various diseases.. 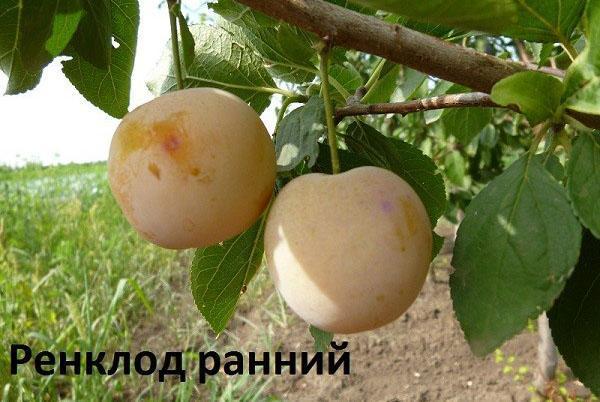 The Renclode variety unites more than 200 varieties of plums, such as Altana, Tambovsky, Michurinsky, Bove and others. All of them are characterized by the following varietal characteristics: 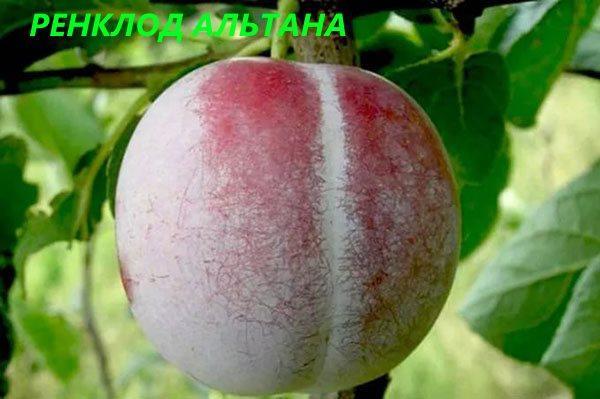 Most subspecies of the Renclode plum are self-fertile, however, they do not differ in a stable and good harvest – the weather conditions during the summer are of great importance. Resistance to frost, drought and disease is average. 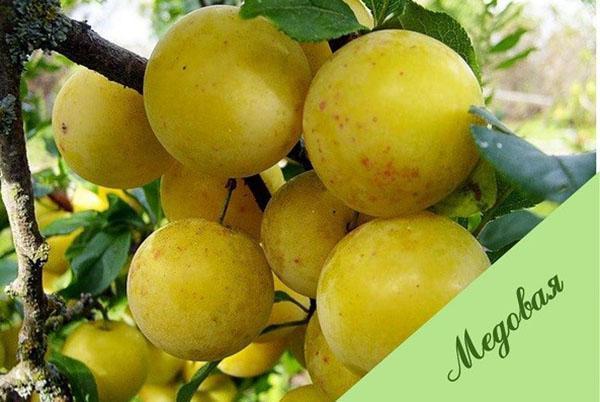 The description of the Medovaya plum variety is quite consistent with the photo of the fruit: beautiful ripe plums have a rich honey color and a slight orange blush. Plum belongs to the early ripening species, the fruits ripen in June. The pulp is juicy and sweet, with an intoxicating aroma. The tree itself has a medium thickened crown, but requires at least 5 square meters. m. of area, since it can reach up to 7 m in height. The variety is suitable for growing in northern regions, it is resistant to low temperatures. 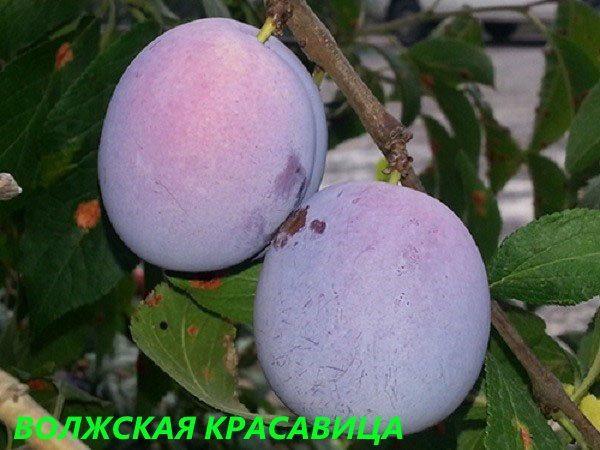 An early dessert variety, fast-growing trees form a round crown and reach more than 6 m in height. Productivity is high, bears fruit from 4 years of age. The cream is rounded, slightly narrowed towards the top, with a clearly visible lateral scar. Fruit size – medium, taste a little sour, but juicy.

Plum Volga beauty received recognition due to its general resistance to frost, diseases and pests. However, it should be noted that flower buds are able to freeze slightly, as a result of which they crumble..

Skorospelka red or Zhiguli plums are suitable as pollinators for the self-fertile Volga beauty. This will help improve the ovaries.. 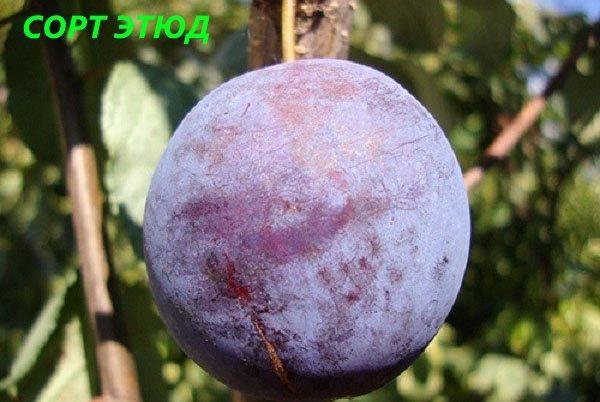 Medium early table variety, the tree has a height above average. The crown is in the form of an oval, slightly upward. In the period of fruiting begins 4 years after planting, the yield is high annually. Fruits weighing up to 30 g, with dense and juicy pulp. The sourness is practically not felt.

The main advantages of the Etude plum are:

For pollination of a partially self-fertile Etude, plum varieties Renklod Tambovsky and Volzhskaya beauty are suitable. 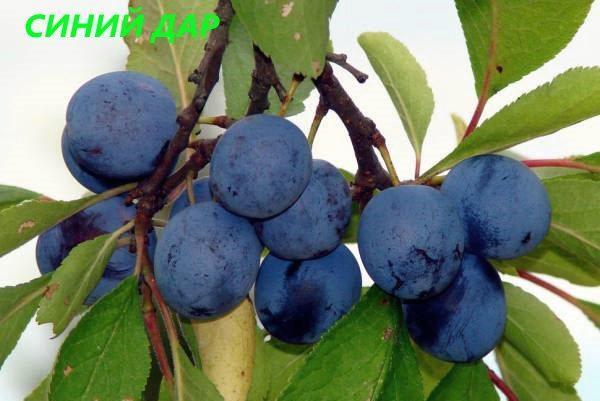 The variety is easy to care for, due to the low (up to 3 m), medium thickened crown in the form of an oval. Fruiting after 4 years of life at the end of August. The fruits are different:

The advantage of Blue Dar plum is self-fertility and high resistance of flower buds to low temperatures. In addition, the variety is rarely attacked by aphids and moths.. 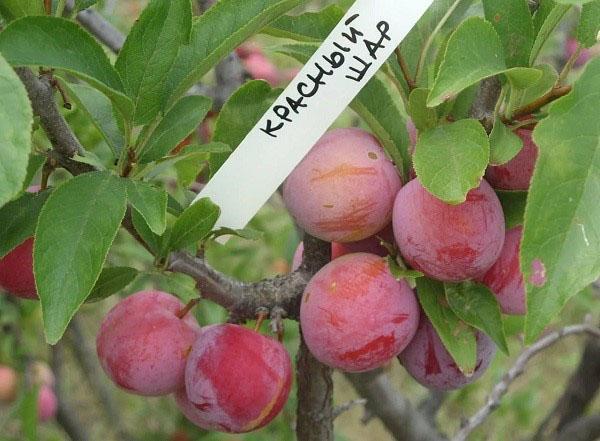 A mid-early variety of Chinese plum. The tree grows compact, no more than 2.5 m in height, the lateral shoots are lowered. Differs in very large fruits (up to 40 g) of round shape. Unripe plums are light green with a yellow tinge, when they reach full maturity, they turn red, hence the name of the variety. Fruiting begins in the second year at the end of summer, plums are juicy, with sourness.

As pollinators for the Red Ball plum, varieties of Chinese or Russian plums that bloom with it at the same time are suitable.

Among the disadvantages of the variety, it is worth noting the shrinking of the fruits in years when there are too many ovaries. In addition, the plum is susceptible to spring frosts, although it tolerates winter frosts well. The variety is resistant to clasterosporium disease and monilial burn.. 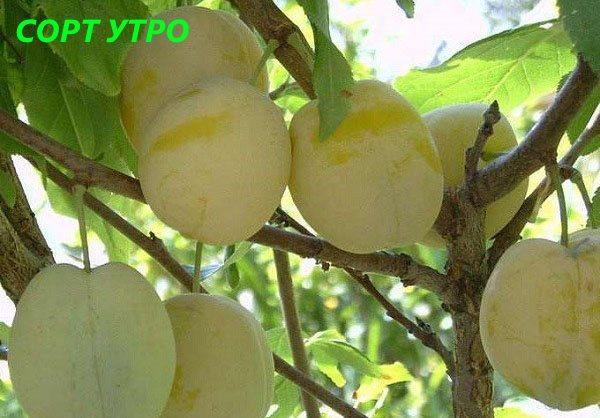 An early ripe plum, bears fruit after the third year of life. A medium-sized tree has a round crown, branches are slightly raised. The yield is high, the fruits ripen in early August, but not all at once. Oval-shaped plums are very juicy and aromatic, with yellow flesh and greenish skin. They have a sweet and sour taste, shelf life during transportation, but not very large (on average 25 g).

Plum Morning does not tolerate frosty winters, but quickly recovers after spring frosts. In dry summers, it requires abundant watering. Practically unaffected by fruit rot and clotterosporia, sometimes attacked by aphids and moths.

The main advantage of the variety is its self-fertility and the ability to act as a pollinator for self-fertile plums.. 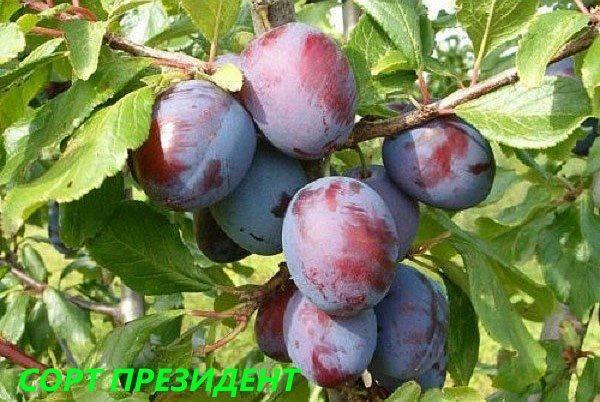 Late-ripening variety, young seedlings are characterized by vertical arrangement of branches. After fruiting (for 5 years), the branches drop slightly. An adult tree does not exceed 3 m in height. Fruits are medium-sized, round, green in color, becoming burgundy after ripening. There is sourness in the taste, and the pulp itself is of a delicate structure and juicy.

Ripe plums adhere tightly to the branches, partially crumble only after overripe.

Plum President has a high drought and frost resistance, disease incidence is at an average level. The variety is self-fertile, but to increase the yield, it is recommended to plant Stanley, Mirnaya or Skorospelka red plums to it.

Of the shortcomings, it is worth highlighting the tough and sour pulp during dry summers and early cold autumn.. 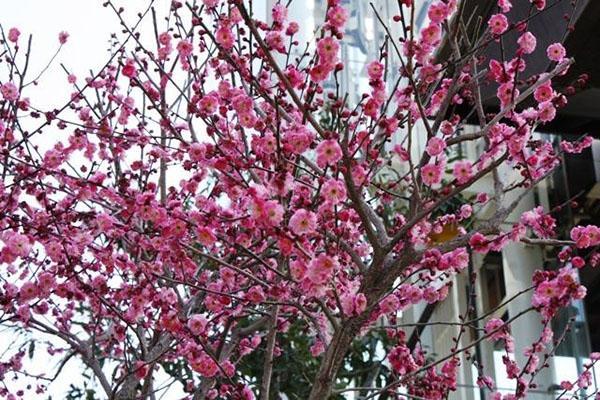 Among the variety of plum trees, it is worth highlighting the decorative group, whose representatives are grown not only for fruiting, but also for aesthetic purposes. Some varieties of plums, according to the name, description and photo, attract attention with lush and bright flowering, while others have an unusual color. The most popular are: 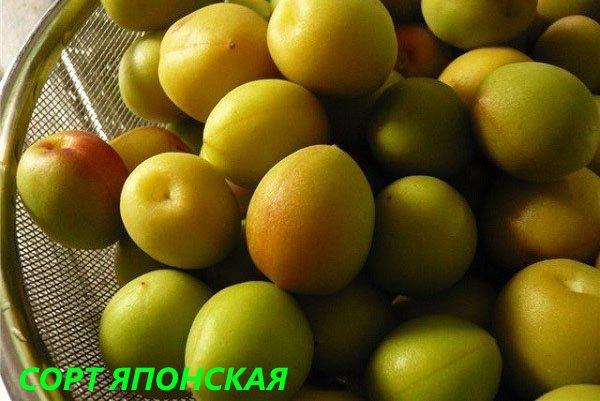 An exotic species native to Japan, which is also called the Japanese peach, apricot, mume or ume. The variety is uniquely beautiful during flowering: a tall tree in early spring is covered with amazing fragrant inflorescences of white or pink color, which bloom for more than 2 months.

In some cases, the Japanese plum grows in the form of a bush..

The fruits ripen in the middle of summer, have a greenish color and sour taste with a tart note, therefore they are used mainly in processed form..

Despite the fact that mume is resistant to diseases, the variety is grown mainly by amateurs. 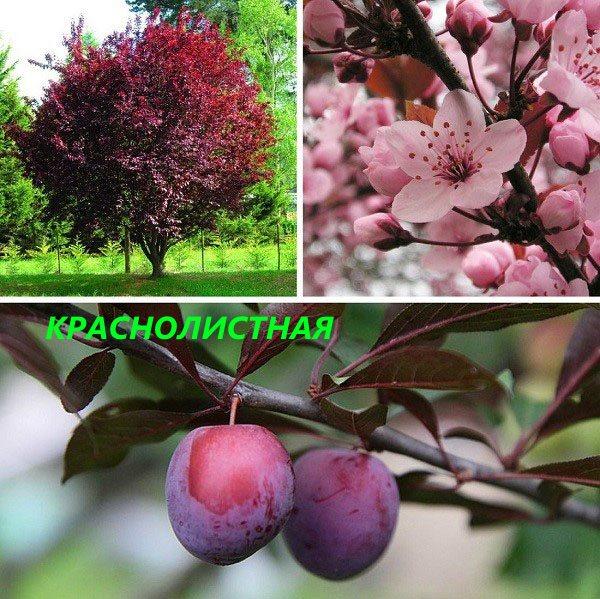 The variety is often called Red-leaved cherry plum or Pissardi plum in honor of the scientist who brought the first seedling from Iran. A characteristic feature of the plum is the red color of the shoots, leaves and fruits, which persists throughout the season..

Fruiting is abundant, but sour notes prevail in plums. The variety almost does not suffer from fungal diseases, but sometimes it is damaged by aphids. Winter hardiness is at an average level. In the southern regions, the red-leaved plum feels great and can grow up to 100 years..

The fruits ripen in August, but can be on the branches, without crumbling, until October. 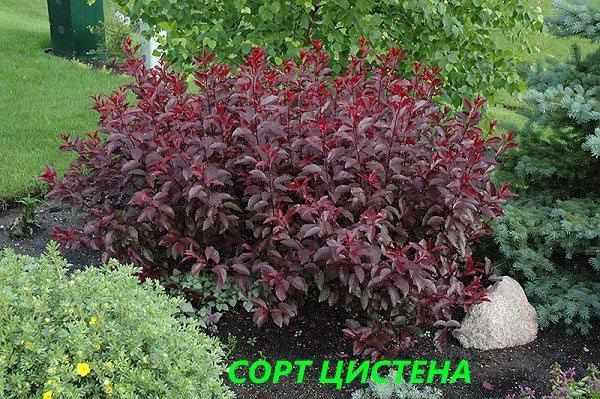 The second name of the variety Dwarf plum is due to its appearance. Cistena is a slow-growing shrub (no more than 1.5 cm per year). The maximum height of the bush does not exceed 2 m, while the crown diameter is usually equal to the height of the bush. The variety is obtained by crossing the sand cherry and the Pissardi plum.

Decorativeness is due to:

Plum Cistena is often used as a hedge, the deciduous cap does not fall until frost. Has an average sensitivity to low temperatures due to damage to young shoots. 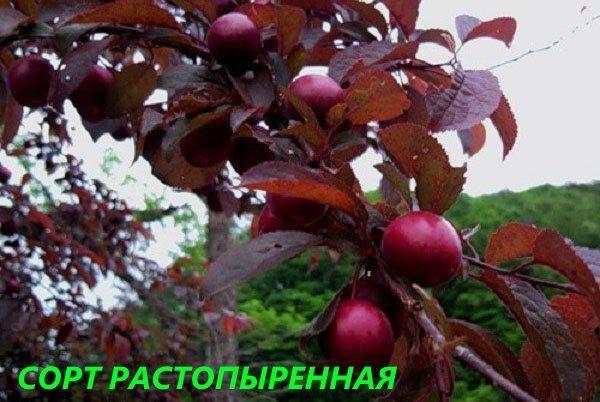 A tall tree with a spreading crown bears fruit with sweet and sour plums from the second year of life. The harvest is abundant, up to 40 kg of plums from one adult tree. Fruits in wild varieties are small, and in cultivated varieties they reach 60 g. The spread-out plum is also called cherry-bearing, cherry plum or cherry plum, it has several subspecies (Nigra, Elegance and others). The dark red color of the foliage and shoots gives the plum a decorative character, making it look like sakura.

The variety is weakly resistant to diseases of black and perforated spot and pests. In addition, it does not tolerate frosty winters, and therefore young seedlings need shelter..

Both garden and decorative varieties of plums have many more representatives, so choosing the right tree for the garden will not be a problem..

The best varieties of plums for the garden – video