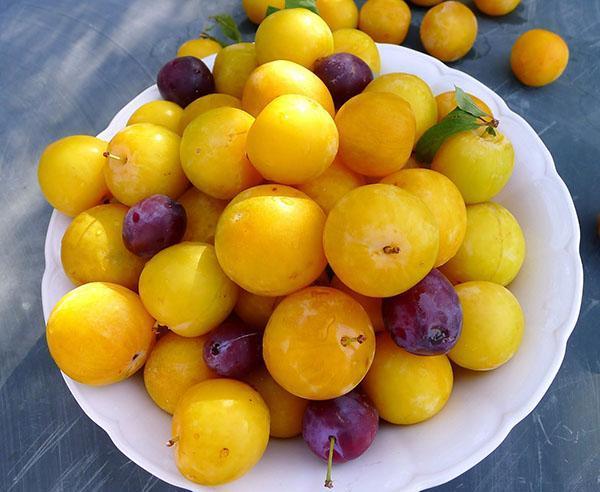 On the household plots of Russians, various varieties of plums are grown everywhere. However, despite the constant interest in culture, the yellow plum is not such a frequent visitor. The reason is the opinion that the yellow-fruited varieties are more correctly considered cherry plum, and the real amber fruits of the plum can be obtained only in the southern regions. This is not true! Breeders really use cherry plum, Chinese plum and homemade plum. Taking only the best from their ancestors, new varieties get better winter hardiness and productivity, the fruits become sweeter and larger.

Today, gardeners have dozens of interesting varieties at their disposal for all parts of the country. Many of them are the result of the work of enthusiasts from the Far East, Siberia and the Urals. There is a yellow plum for the Moscow region and the Northwest. Excellent varieties of different ripening periods were bred for more southern regions from the Central Black Earth Region to the Kuban and Crimea. 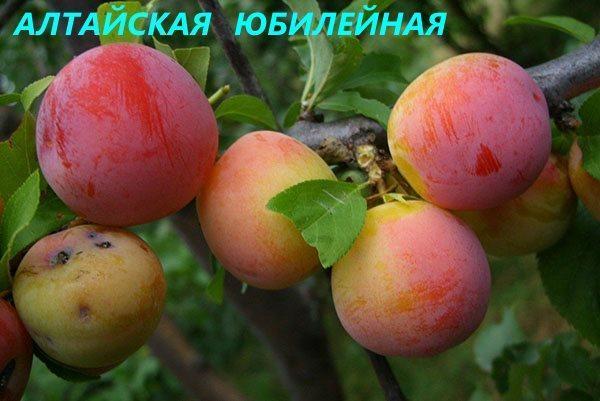 Many varieties of yellow plum are descended from the Chinese, Manchu, Ussuri varieties. Such plants are hardy, unpretentious and usually fruitful. No exception is the Altai Jubilee variety. Plum, capable of wintering and bearing fruit well beyond the Urals, is different:

The peculiarity of the variety is small, weighing 14 – 18 grams, fruits with yellow pulp and the same thin skin, covered with a red-pink blush in a warm, sunny summer. The bright integumentary color can occupy almost the entire surface of the plum, making you forget that you have a yellow-fruited variety in front of you..

The early yellow plum variety forms a medium-sized tree with a small stem and a moderately dense crown. Like most plums of this type, Altai Jubilee is self-fertile. Therefore, for stable yields, plantings need pollinating plants.. 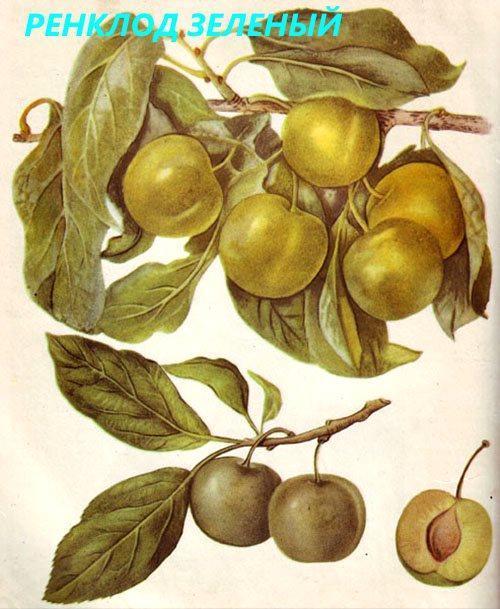 The Renclode family of plums traces its history to ancient varieties from Spain and France. Green Renklode also came from the south of Europe to the territory of Russia, in the 19th century and in Soviet times it was widespread south of the Central Black Earth Region..

The yellow plum variety is distinguished by early fruiting and begins to form ovaries by the age of five. And after 2–4 years from the tree you can get up to 40 kg of yellowish-green fruits with dense sweet pulp. Although in appearance the plums of green renklode are inferior to modern large-fruited, ruddy varieties, they are still considered an excellent raw material for jam, marmalade or jam..

Completely self-fertile, no yellow plums. To obtain an excellent harvest from a green plant, this old variety will require pollinators, among which there may be varieties of Vengerka blooming at the same time or another old yellow plum – Egg. 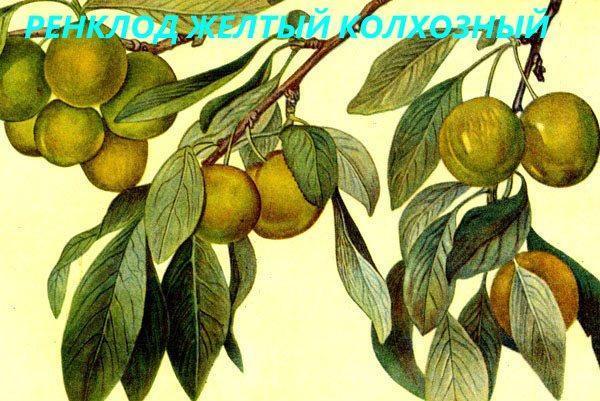 I.V. Michurin was interested in the excellent taste of Renklode green. To obtain a yellow-fruited variety with greater winter hardiness, he crossed the thermophilic “Frenchman” with the hardy one. In 1947, the new collective farm Renklode was entered into the State Register and recommended for cultivation in the North-West, in the middle lane and in the black earth regions of the country..

On medium-sized trees with a rounded crown, yellow plums of a round shape weighing up to 25 grams ripen. The pulp of the fruit, like the thin skin, has a yellowish-green hue and a pleasant sweet and sour taste. Unlike the green plum of the Michurin variety, they accumulate less sugar, but at the same time they are juicier, and their harvests are annual.. 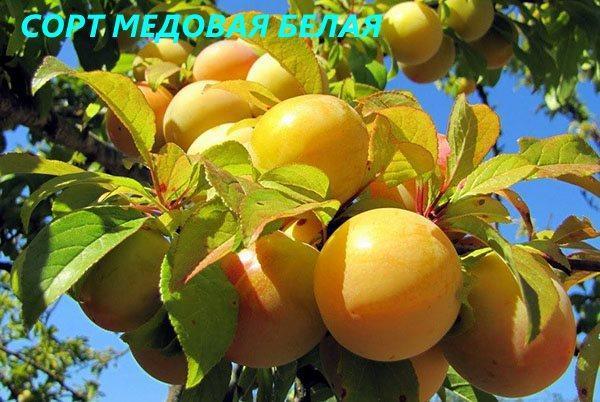 Donetsk breeders bred a yellow honey plum. In Russian conditions, this thermophilic variety can be grown without restrictions in the Central Black Earth Region and further south, however, with proper preparation for winter, the trees feel good in the Moscow Region, the yellow plum also grows in the Kaliningrad region and other areas of the middle zone..

Oval fruits with a thin, seemingly transparent skin and weighing up to 50 grams are distinguished by a bright honey taste. Plum pulp with an easily detachable stone has a greenish or yellow color. Yellow skin in the sun becomes amber-orange, ruddy.

Honey yellow plum is resistant to many diseases of the culture, tolerates dry periods without loss, and the fruits removed on time can be transported and stored. 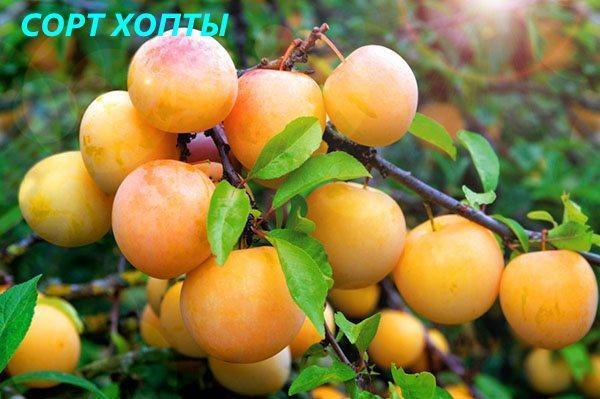 The gardeners of the Urals, Siberia, and the Far East are familiar with the yellow Hopty plum, obtained in the first half of the last century. The first ovaries on spreading tall trees of this variety appear in the fourth year of life. Harvesting occurs at the end of summer and the first weeks of September. The variety shows excellent winter hardiness and endurance..

Sun-yellow plums of this variety have:

When planting and caring for the yellow plum of this variety, it is important to take into account the height of the adult plants, as well as the need for pollinators..

The delicate skin is damaged during transportation and long-term storage. The fruits are consumed fresh, and also used as raw materials for jam and preserves. In compote, the plum peel retains a bitter aftertaste. 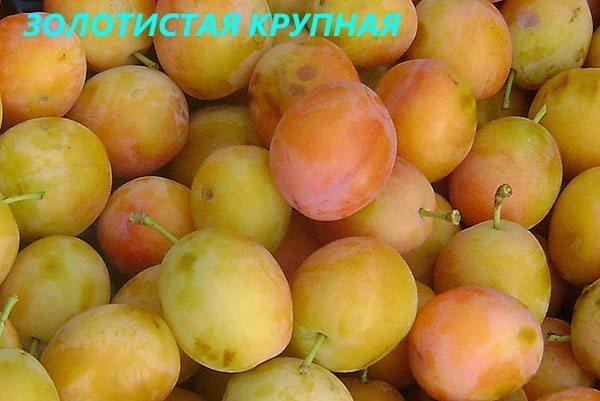 For gardeners of the Lower Volga region and other southern regions, the variety of yellow plum Zolotistaya large is suitable. A large-fruited, drought-resistant variety, which begins to form an ovary at the age of 4, brings 25-30 kg per tree. The weight of light yellow plums with an excellent sweet taste reaches 40 grams. On the skin covered with a noticeable waxy bloom, a beautiful blush forms during sunny weeks.

A distinctive feature of this variety of yellow plum is the ability to ripen the fruit and store it cool for 30–45 days.. 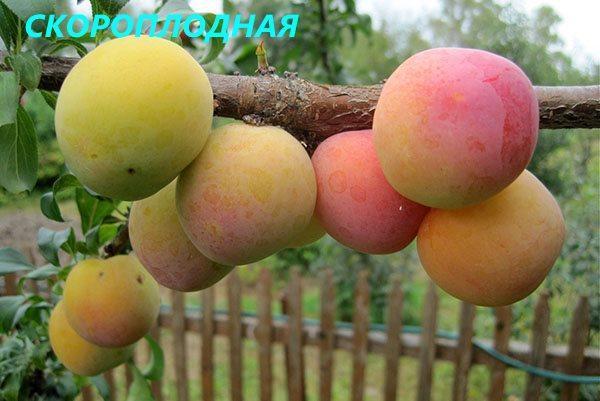 As a result of crossing American and Ussuri plum varieties, a yellow early-fruited plum appeared with dessert fruits weighing up to 20 grams. Amber plums with a red superficial blush delight:

An early yellow plum is ready for harvest in the first half of August. Unfortunately, fruiting is irregular and not too abundant. But this is compensated by excellent winter hardiness and resistance to disease and many pests.. 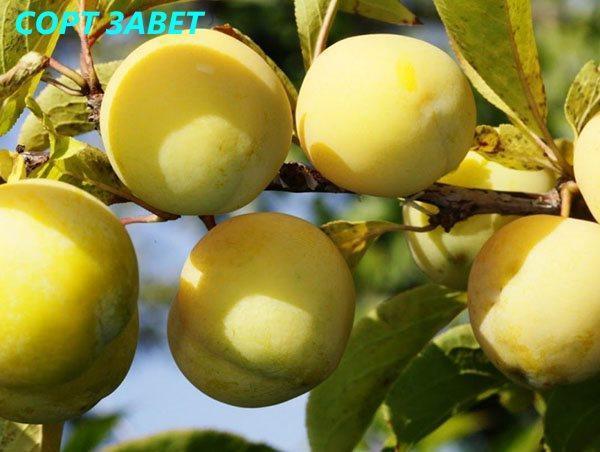 On the basis of the Manchzhurskaya krasavitsa variety for the Volga-Vyatka region, a winter-hardy variety Zavet was obtained with medium-sized trees and almost rounded yellow fruits weighing from 25 to 30 grams.

Plums with yellow, sweet and sour pulp ripen in late August and early September. Due to its light aroma and excellent taste, the variety has received high marks from tasters and is recognized as universal. Ripe fruits can be transported, they make excellent jam and compotes.

The advantages of the variety include high winter hardiness and durability. With proper planting and care of the yellow plum, with timely rejuvenating pruning, the trees bear fruit for 4 to 30 years.

Video about the yellow plum of the Mara variety