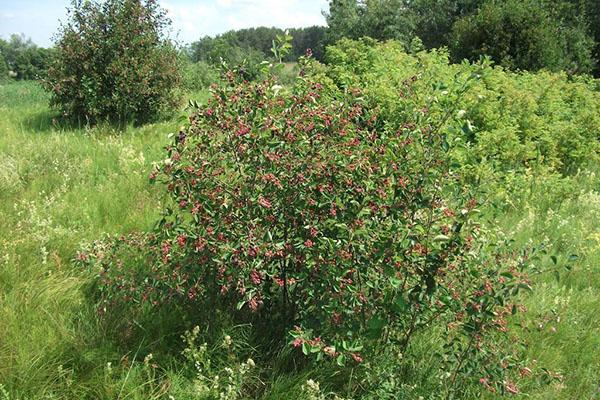 Since ancient times, people have appreciated the healing properties of green plants. Among them, one can distinguish a pretty shrub – irga, berries, bark and leaves of which have a number of useful properties.

This deciduous shrub grows throughout the Northern Hemisphere. It can be found in North Africa and America, in the Far East, in the Caucasus and in the Crimea. It often grows in forest glades, in the mountains and among thickets of various bushes..

Irga feels great on any soil, with the exception of swampy areas where stagnant waters are present. The main thing is that there is enough light for the fruit to ripen. In such conditions, the berries are large, juicy and healthy. This is especially true for cultivated varieties. On average, up to 15 kg of berries can be harvested from each such bush during the entire period of fruit ripening..

General description of the shrub and its beneficial properties 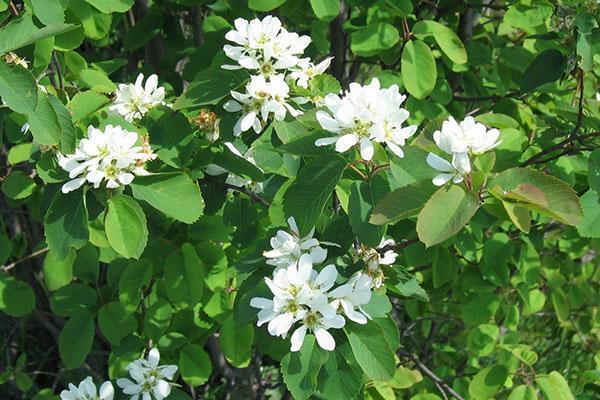 The deciduous shrub irga confidently takes its place of honor in the summer cottages of lovers of greenery. The plant looks especially attractive in early spring. When the first leaves appear on the branches, the bush is covered with delicate villi. From the outside, it seems that he is wearing a silver shawl, which gives the plant a unique charm. In the photo of the irgi, you can see many cute flowers that adorn the spring shrub. They come in pink or white..

When the inflorescences begin to fall off, along with them, the delicate villi that covered the green leaves disappear. Often, the leaf plate of a shrub can be olive or pinkish.. 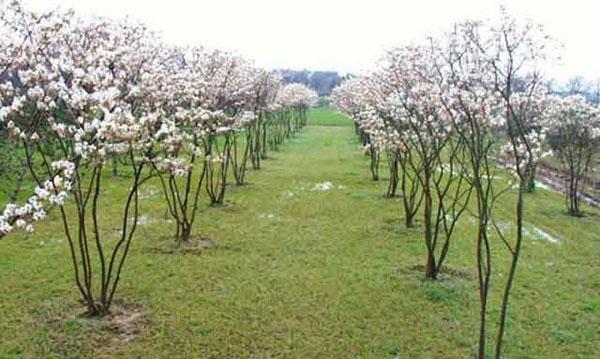 The bark of the trunk is usually gray or brown with a pinkish tint. It is slightly velvety to the touch.

The leaves and bark of the bush have excellent medicinal properties. They are thoroughly dried, crushed and stored in a cool room. Useful substances are stored for about 2 years.

The plant is distinguished by a dense crown of simple green or gray leaves. During the fruiting period, on the bush, you can see miniature fruits with pink barrels, collected on one brush. Unripe berries are cream colored, and when ripe, they take on a purple or purple color.. 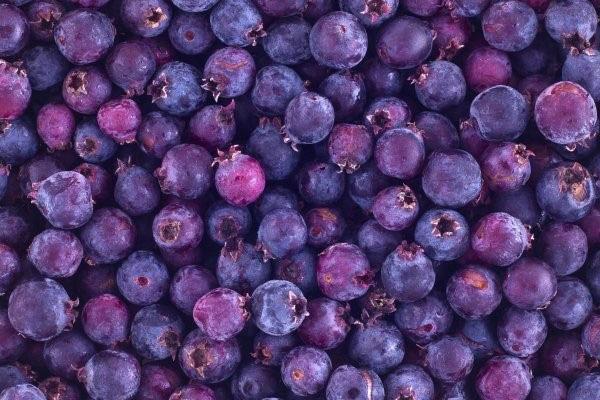 Yirgi berries have a pleasant taste. The delicate sweetness and juiciness of the fruit attracts young children and adults. Garden birds also love to feast on them, after which they spread the seeds of irgi throughout the district.

Berries should be picked from the bush only when ripe. Otherwise, they will lose their healing properties..

Each fruit contains a huge number of nutrients:

Each of these components has a beneficial effect on the human body.. 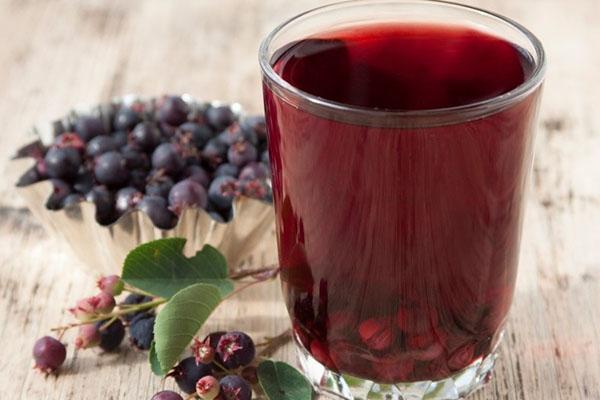 The beneficial properties of irgi berries are manifested when it is used:

Often, the juice from the fruits of this shrub is attributed to the elderly, for good heart function. Inflorescence tincture helps to normalize sleep and blood pressure. In the presented photo of the berry of the irgi, its external features are clearly visible.. 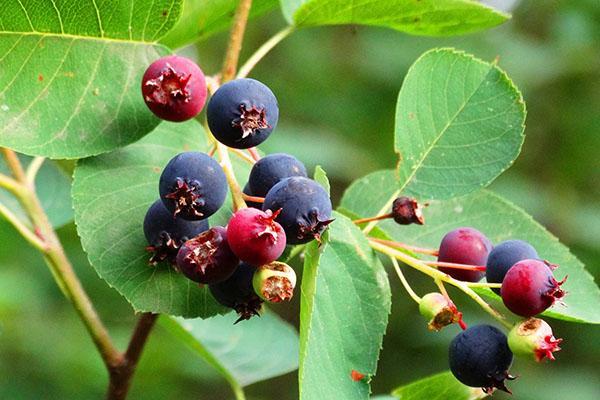 In cooking, the fruits of the shrub are used to make various drinks, preserves or jams. Raw berries are used as a filling for pies, tartlets and even cakes. They make fragrant marmalade and purple marshmallows..

The fruits lend themselves to drying, while maintaining the vitamin set. In winter, a decoction can be prepared from them to increase immunity..

To get the most out of the wonderful berries, you should take into account the contraindications and beneficial properties of irgi. For example, if a person suffers from poor blood clotting, the fruits can harm him. This is especially true for those who work with various dangerous devices. When injured, it will be much more difficult to stop the bleeding..

Also, the berry is useful as a sedative, but its frequent use leads to a delayed reaction. This is something to think about for car drivers who are under constant stress. At a crucial moment, they can lose their vigilance and get hurt. Therefore, it is wiser to adhere to the golden principle – it is better to have a little different things than to get hung up on one.

In order not to lose the ripe harvest of berries, it is advisable to install a scarecrow scarecrow on the bush. Otherwise, birds that love purple irgi fruits will replenish their vitamin reserves, and people will be left with nothing..

Acquaintance with the variety of varieties

A pretty green plant that adorns country houses and summer cottages attracts the attention of gardeners. In the photo, the irga shrub is shown against the background of other park crops, as its bright highlight. According to some reports, there are about 25 species of this plant. Some of them are especially beautiful.. 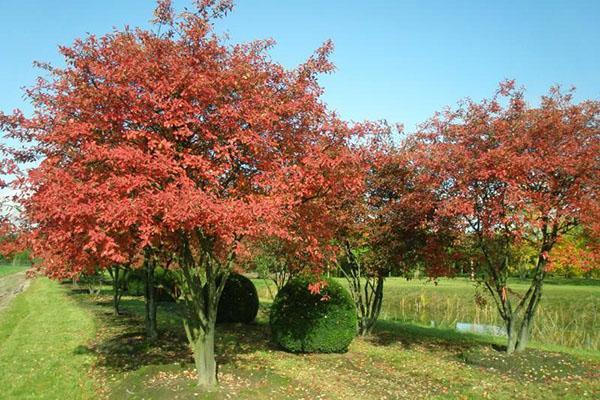 A charming variety in the northern latitudes – Canadian Irga. Some people know it as a berry or grape of the northerners. A wonderful drink is prepared from its wonderful fruits, which looks like wine..

The shrub can grow up to 7 meters. Its oblong stems form a wide, dense oval crown. The leaves of the bush are ovoid, of an unusual color. When the plant is just blooming, they are brownish, in the summer they are gray-gray, and in the fall they are reddish or golden..

To the touch, the leaf plate is soft with a delicate fluff, slightly rough. The shrub blooms in late spring with large white flowers, which are collected in graceful brushes.

The fruits of the shrub resemble a rose hip. Round light pink “apples”, as they ripen, acquire first a blue and then a purple hue. Ripe fruits are covered with a wax coating. It tastes sweet because the berries contain little acid and a lot of sugar.

In nature, there are various types of such shrubs. Descriptions of varieties of canadian irgi indicate all the delights of this useful plant:

Snow-white inflorescences are collected in clusters on which dark red fruits develop. As they mature, they become almost black in color..

If there is a desire to grow shrubs in an urban environment, “Ballerina” perfectly tolerates gas pollution. At the same time, the berries do not accumulate harmful substances.. 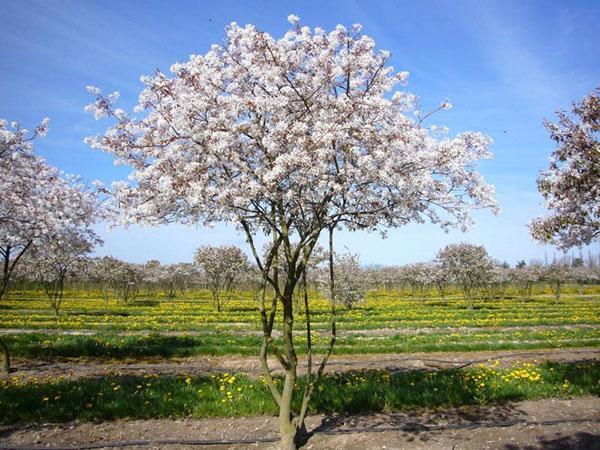 A large deciduous shrub plant – Lamarca’s irga reaches up to 5 m in height. Differs in green oval-shaped leaves with a scalloped frame.

Inflorescences are small, white. They appear on the bush in huge numbers, which looks very beautiful. Lamarck’s irgi fruits have useful properties, therefore they are widely used in cooking.. 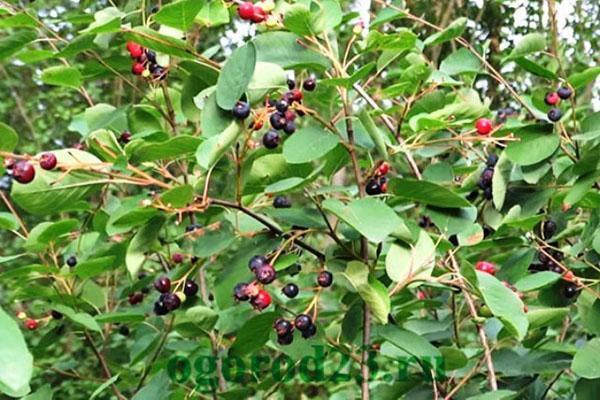 This fruiting deciduous upright shrub grows up to 3 m in height. It has a wide crown consisting of thin branches. At first they are silver in color, but with age they acquire a brown tint. At the tips of young shoots, corymbose inflorescences are formed, resembling stars. The buds are usually white with a pinkish tinge. Bloom for about 10 days. During this period, the bush looks especially attractive against the background of other plants in the garden..

Irga ordinary can grow in one place for about 15 years. She is not afraid of strong winds, droughts or frosts.

Healing berries appear when the shrub is at least 4 years old. They are slightly smaller in size than artificially bred varieties. Color – dark blue, almost black with a whitish bloom. 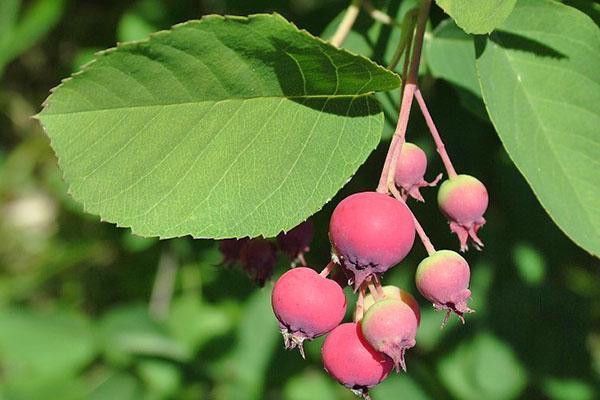 The leaf plate is 3.5 cm wide and 4 cm long on average. The upper part is painted in a dark green color, the lower one with a pale white tint. In the autumn, it becomes scarlet and bright yellow. Elliptical shape, oval top. Leaf framing is notched.

Inflorescences in the form of corymbose brushes up to 10 flowers of white, yellowish or cream color. Berries on the bush appear first green, then scarlet. When fully ripe, they acquire a dark blue, almost black color. Each fruit is distinguished by a gray bloom. They have useful properties, slightly acidic in taste. Ripen gradually starting in July. 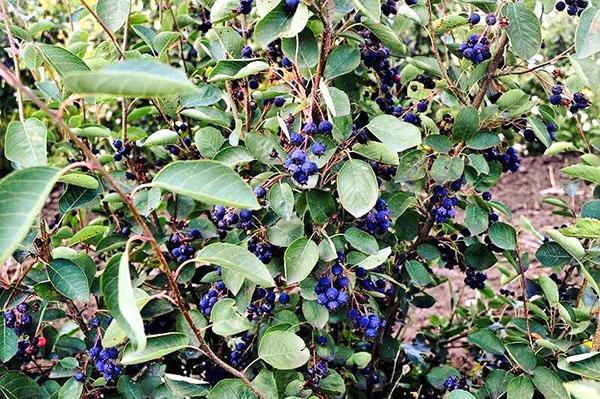 A shrub of this type during the flowering period resembles a fragrant bird cherry. It is a compact version of an ornamental plant with a height of 2 to 6 m.

Irga spicate has oval leaves with small notches. During flowering, they are practically invisible due to the many white or pinkish inflorescences. Later, the bush is covered with medicinal berries with an unusual sweet taste..

Representatives of this variety live up to 30 years of age. This makes them leaders against the background of other fruit bushes..

Irga spikelet can withstand frosts above 15 degrees, for which it is valued by the inhabitants of Siberia.

Having met such a pretty plant, you will notice that it has a double benefit. This is both an original decoration of a summer cottage, and a storehouse of useful substances at hand. Is it wise to walk past a magnificent garden squirrel? It’s worth thinking about.