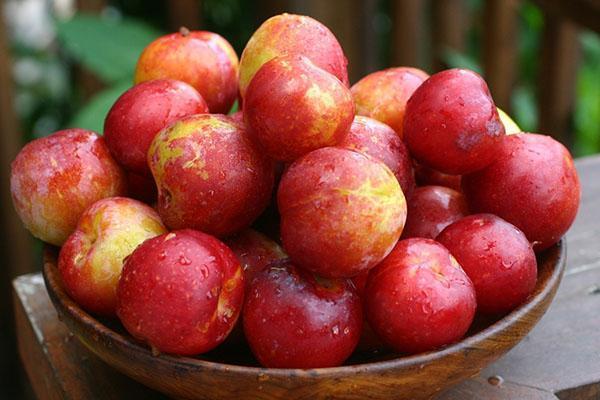 In the gardens of the Middle Kingdom, willow or Chinese plum was grown in the 13th century. For a long time, the culture has proven its unpretentiousness, excellent winter hardiness and productivity. For different regions of the empire, the Chinese developed varieties adapted to the conditions of the northern mountainous regions and subtropics of the south..

In warm provinces, trees grow up to 8-12 meters, and the fruits of the Chinese plum can reach 80-100 grams. In the north, in Manchuria, its own community of varieties has formed. The Ussuri plum cannot be called large-fruited, but it is not so tall and tolerates frosty winters without loss..

Due to the ability of the culture to interbreed with other varieties, the plants have attracted the attention of breeders. Today, hybrids and varieties have been obtained based on the American and European subspecies, cherry plum and other types of stone fruits.

Looking at how the plum blooms, one cannot fail to notice its decorative effect. Since the massively opening buds are collected in small inflorescences, trees appear completely white or pink in spring. Ripening plums sit just as densely on the branches, which, depending on the variety, can be yellow, red or deep purple.. 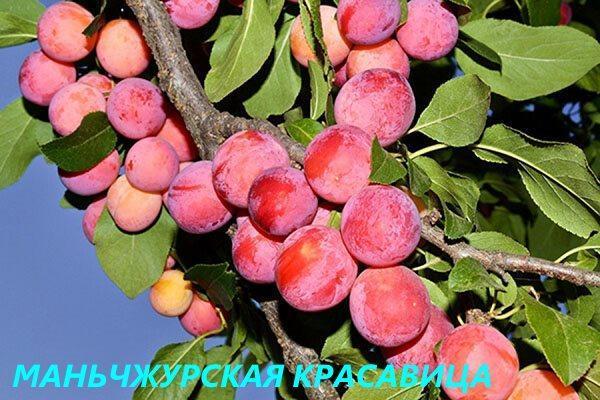 In the first half of the last century, seedlings of this variety were brought to the Soviet Far East. The trees from Manchuria, combining the properties of the Chinese and Ussuri plums, have proven themselves quite well. They showed average winter hardiness, excellent drought tolerance and decent palatability..

Since 1947, the plum has been recommended for private households from the Far East to the West Siberian region. And today, the Manchurian beauty dwarf plum trees are in gardens throughout the country, including its European part..

Plants with a small stem and dense, requiring regular pruning crown enter the season of fruiting already in the third year after planting. Before smooth dark green leaves appear on the branches, small white flowers open on the bouquet branches.

Harvesting is carried out in the last days of August or early September. The fruits of this variety of Chinese plum have a rounded shape without a visible seam and weigh about 15 grams. By the time of ripening, the amber skin is covered with a thick crimson blush and a gray waxy bloom. The variety is rated as universal, which confirms the pleasant sweet and sour taste and light aroma of juicy greenish-yellow pulp..

When growing a Manchurian beauty plum, you need to take into account that the variety is self-fertile, and for a decent harvest it needs pollinating trees nearby.

In the spring, there is a risk of the appearance of spring decay on the trunk. So that small trees do not freeze and can take root in the northern regions, it is preferable to plant plums in spring. 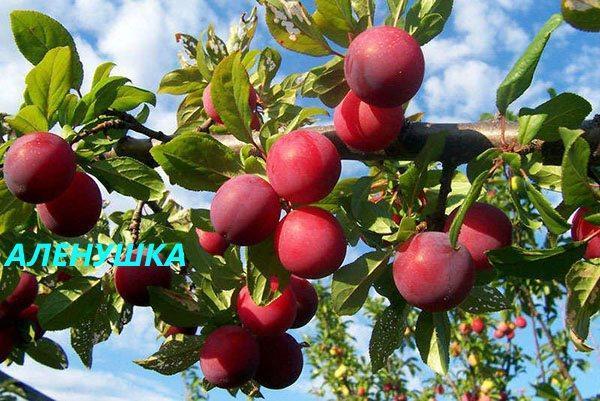 This variety with red fruits, intended for the Central Black Earth Region and more southern regions, is obtained from a crossing of the Red Ball plum variety and the Chinese woman.

Trees up to 2.5 meters high are much shorter than their ancestors from China, but not as thick as their Ussuri counterparts. The opening of white buds, collected in triple inflorescences, precedes the appearance of light green foliage and falls on the first days of May. Elongated, obovate leaves with a smooth, glossless surface unfold at the stage of ovary formation.

The plum variety Alyonushka is recognized as a table one. Rounded with dark red skin, the fruits reach 35 grams and are ready for harvest in mid-August. The orange pulp has a medium-dense texture, high juice content and light aroma. The taste is sweet and sour, pleasant. If the summer is warm and sunny, and the care of the plum provides the tree with everything it needs, the palatability of the fruit will noticeably improve. With a lack of sun, the pulp of an early variety does not pick up enough sugar and seems watery.

Like other varieties, this Chinese plum starts to bear fruit very early. The first ovaries on a tree are formed in the third year of life, however, without pollinators blooming at the same time, it is impossible to wait for the harvest..

Self-sterility is not the only drawback. Alyonushka of all plums of this subspecies is more often and more abundantly affected by aphids. 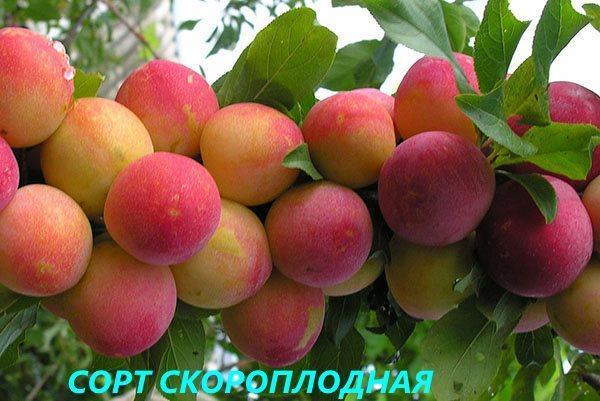 An early dessert variety is the result of a crossing of the Klaymax plum of American origin and the Ussuriyskaya red domestic selection. Mature plum tree The early-fruiting tree has an average height and a crown not prone to excessive density. In the spring, in the second week of May, flowering begins. The ovaries are formed on the bouquet twigs. Together with them, elongated, lint-free light green leaves appear..

In the first half of August, fruits ripen with round, yellow skin and bright red blush. If densely strewn plums weighing about 25-30 grams fall in the sun, pink-red color becomes predominant in their color. The pulp under the thin skin has a yellow color and medium-dense, juicy consistency. The variety of Chinese plum is distinguished by a quick set of sugar and a bright fruit aroma..

Delicious plums are not very well stored and transported, but they are excellent fresh. Unfortunately, this variety not only requires cross-pollination, but also irregularly pleases with yields. But already in the third year, the seedlings begin to bear fruit and do not age for more than 20 years..

Plum early-fruited tolerates winters of the middle lane well, is not afraid of drought and for many varieties, together with hybrid cherry plum, is the best pollinator. 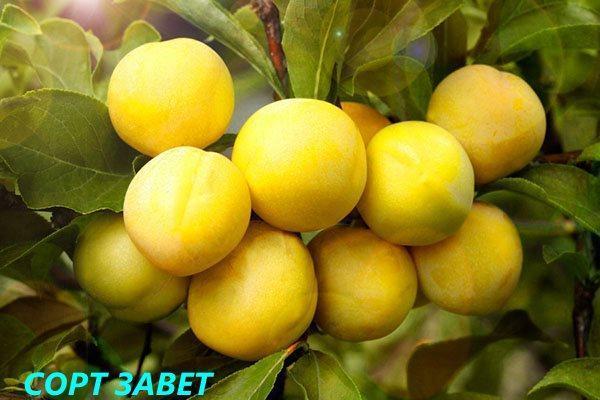 – great material for breeders. On its basis, many varieties were obtained for cultivation on the territory of Russia. In 2004, the Zavet plum was included in the State Register, which has the same origin and is recommended for the regions of the Volga-Vyatka region..

Trees up to 4 meters in height bloom for the first time at the age of four years, and then annually give bountiful harvests for 30 years. However, in order to achieve this, rejuvenating pruning must be included in plum care and pollinating varieties are planted nearby. The crop is disease resistant, but requires protection from pests.

Late flowering, starting in the last decade of May, takes place not only on bouquet, but also on growth shoots. Along with the ovaries, smooth dark green leaves characteristic of the Chinese plum appear. Ripening of rounded yellow fruits weighing up to 30 grams begins in late August. The sun falling on the plum colors the skin in pinkish and carmine tones, clearly visible under a light waxy bloom. Juicy dense pulp has a yellow color and by the time of harvest acquires a harmonious sweet and sour taste.

Flavored Plums Covenant can be stored and transported, consumed fresh and used for making homemade products or pastries. 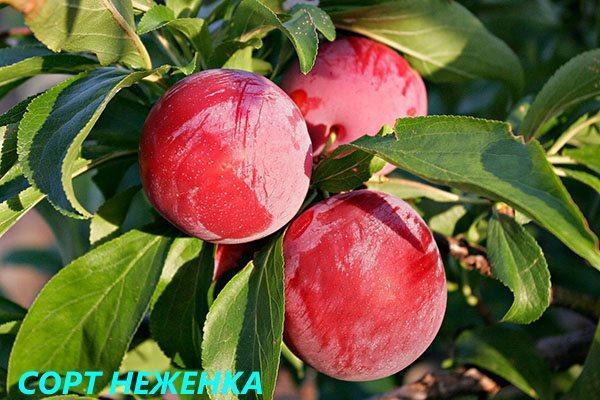 A variety for table purposes, delighting with red juicy fruits, obtained as a result of crossing the variety Chinese woman and plum Skoroplodnaya.

Unlike other Chinese plums, the Sissy does not start fruiting until the fifth year and is partially self-fertile..

White buds, collected in inflorescences of 5 pieces, are densely strewn with bouquet branches. Flowering occurs in mid-May, and fruit ripening begins in the third week of August. The almost round plums of the Sissy are covered with a red thin skin, under which there is a tender, melting yellow pulp. Even fully ripe fruits do not crack, which makes them easier to transport and improves the quality of the harvest. Plums weighing 25-35 grams are good fresh and for making compotes and jam.

The advantage of this variety of Chinese plum is the high winter hardiness of the shoots. If frosts affect the tree, then flower and growth buds suffer.. 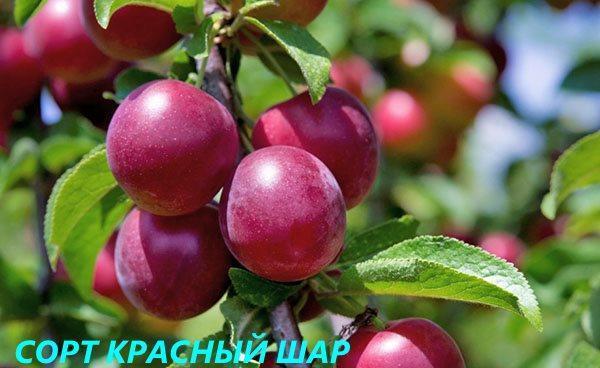 Every gardener wants the fruits on the plum to be not only tasty, but also beautiful and large. Plum variety Red ball – exactly what you need.

Trees 2-3 meters high enter the fruiting season very early. The seedlings bloom and form the first ovaries in the second or third year, and then every year they provide the summer resident with a good harvest of red rounded fruits weighing from 30 to 40 grams. Attractive plums with a waxy coating and yellow, incredibly juicy pulp are used for table purposes, can be transported and stored for a short time..

Among the early varieties, along with this, it is worth highlighting the Golden Ball plum, which differs from its red-fruited counterpart in taller, spreading trees and a bright yellow-amber color of round fruits. The weight of plums also reaches 40 grams, however, with mass fruiting, part of the ovary may crumble, and the remaining fruits become smaller. Harvesting is carried out in mid-August. In the middle lane, there is a high risk of freezing of young shoots and buds.

Video about choosing plums for the garden