Black walnut – planting and caring for a powerful perennial giant 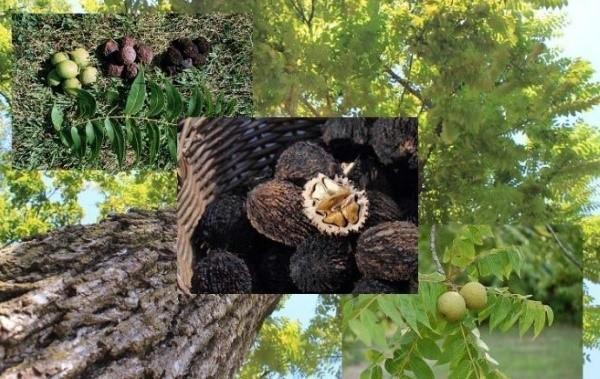 Nuts are the largest trees, but the real giant among them is the black walnut, the planting and care of which is of interest to many. This is not surprising, because culture is distinguished by its versatility. Possessing increased frost resistance, black walnut can live up to 100 years. Tall trunks of an unusual chocolate color with a wide crown will delight not only with a harvest of delicious fruits. Walnut foliage, due to the increased amount of phytoncides, serves as an air purifier. The fruits of the nut are very useful – they are recommended to be used for many diseases..

Planting and caring for a black nut is somewhat different from growing a walnut that is more familiar to us. This is due to both the dimensions of the tree and the characteristic features of the species. Before heading out for a seedling, let’s get to know this crop and find out how to plant it and what it prefers..

Black walnut – description of the culture 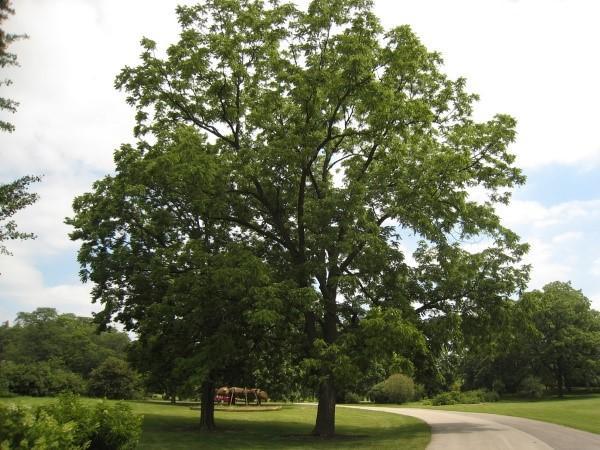 In their homeland, in North America, adult nuts grow up to 50 m in height with a trunk diameter of about 2 m.In our conditions, trees average 18 m in height, and a maximum of 25 m, with a trunk up to 0.5 m in diameter. Agree that these are quite large values, especially for a private garden. Quite naturally, this leaves an imprint on the choice of a place for a seedling, given its future dimensions..

The black walnut got its name for the color that is specific and not characteristic of its fellows. The roots, bark and shell of the fruit have a beautiful black color. 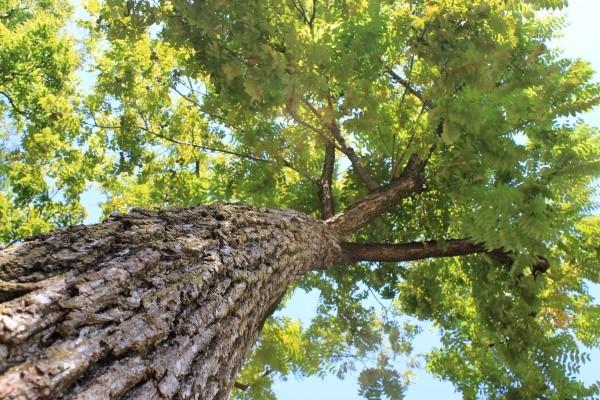 Seeing this tree, you are unlikely to confuse it with a walnut, even at a young age, while it is still not tall..

You can recognize the largest representative of the species by how a black walnut looks like: 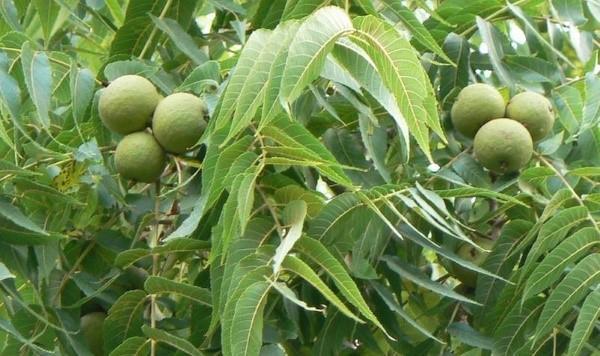 The homeland of culture is the northern part of America, but it came to us relatively recently – at the end of the 18th century. Natural growing conditions have left their mark on where black walnuts grow in Russia. Although not very popular yet, most plantings are found in the southern regions. In nature, these are the banks of reservoirs, deciduous forests and humid mountains. As a cultivated tree, black walnut is most commonly found in botanical gardens.. 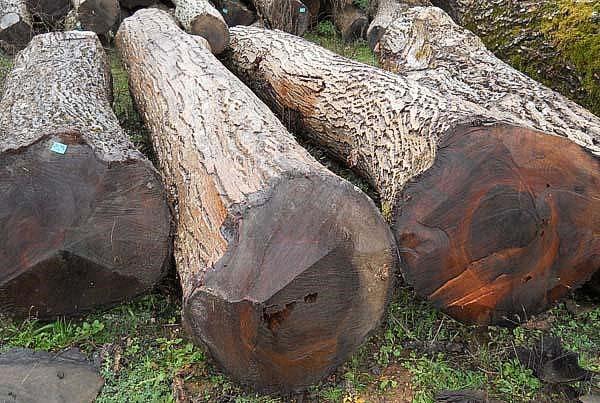 Remarkably, black walnut wood is also dark in color, but closer to rich brown. Despite its strength and density, it lends itself well to processing and grinding. 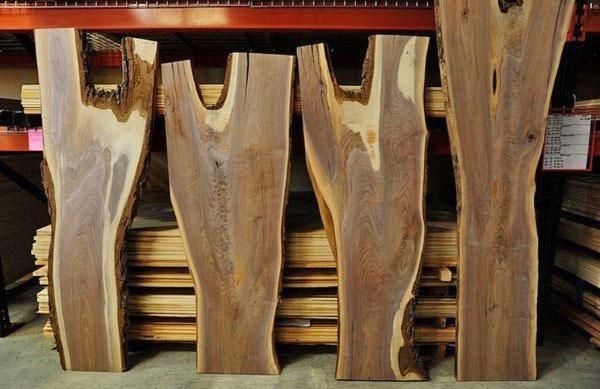 How to grow a black walnut: planting methods and choosing a place for a tree

On a private plot, this unusual nut appears as a seedling or ripe fruit. Most gardeners prefer not to tinker with seedlings, but to purchase young trees from the nursery. If you feel the same way, go for seedlings under 3 years of age. Older nuts adapt harder and tolerate transplanting worse..

In nurseries you can find seedlings with the name “Black American Walnut”. Don’t hesitate and buy – it’s the same culture. The American nut is called for its historical homeland..

In the absence of the desired seedling variety on sale and if you wish, you can grow it yourself. All you need to do is buy a dozen ripe nuts and show a little patience.

The subtleties of growing a seedling of a nut from fruits 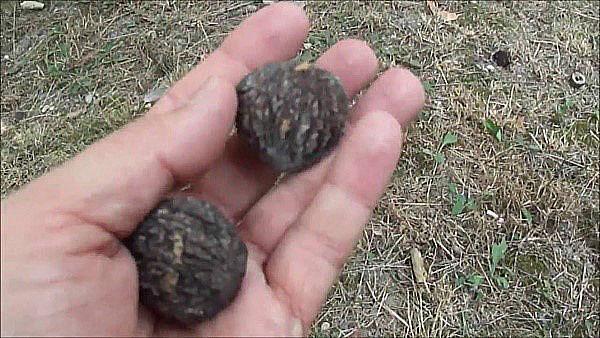 First of all, keep in mind that the fruit of the black walnut has a thick and tough skin. Having planted them dry, you will wait for the sprouts for a long time. A simple soaking procedure will help speed up germination. Place the fruits in a jar of water and soak for 3 days. Remember to change the water every day. 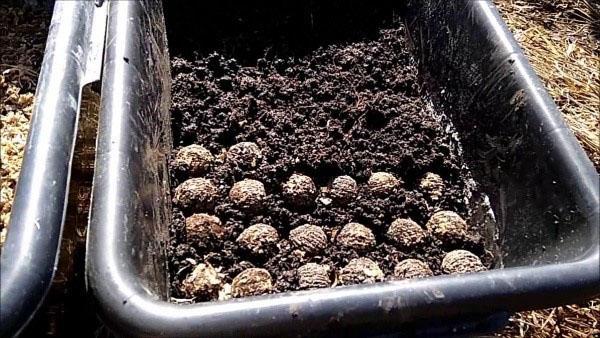 On the fourth day, plant the nuts in pots, one in each. A higher percentage of germination is noted if you use not soil, but wet sand.

Do not make the hole too deep – 10 cm is enough.Place the nut itself on the barrel.

By the way, it is best to germinate the nuts in the fall, right after harvest, while the fruits are fresh. True, seedlings will move to open ground only next spring, after overwintering in the basement. If there is no such room for wintering, wait until April.

To preserve the fruits and not disappear, sprinkle them with sand and leave them in the pantry until spring. In this case, start sprouting black walnuts in late March – early April. The seedlings can be transplanted into the garden as soon as the frost passes and a stable heat is established. But it is desirable that the young nut spend the winter not on the street for the first year of its life. If you don’t cover it well, the seedling will die..

Where and how to plant black walnut 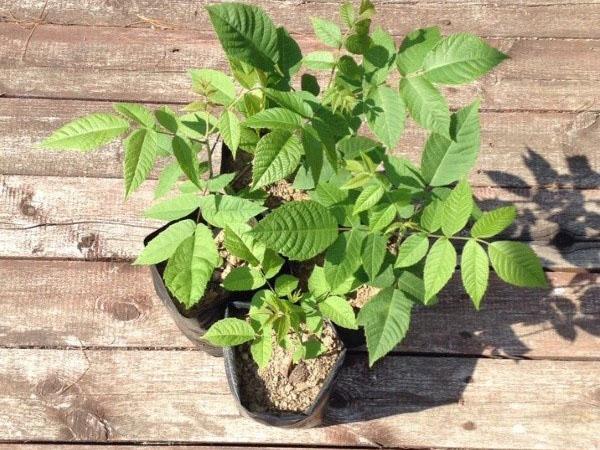 Frankly, black walnut is not a tree for small areas. Its far-reaching roots and deciduous crown overflowing with phytoncides will not leave any chances to close-growing neighbors. The minimum distance between two nuts should be at least 15 m, so planting a grove is unlikely to work. Walnut foliage cleans the air well and has antibacterial properties, but it is dangerous for most horticultural and horticultural crops. The fragrant leaves release a toxin called juglone, which will quickly kill nightshade crops and potatoes. Do not plant pear, plum and apple near the black walnut – it will oppress them.. 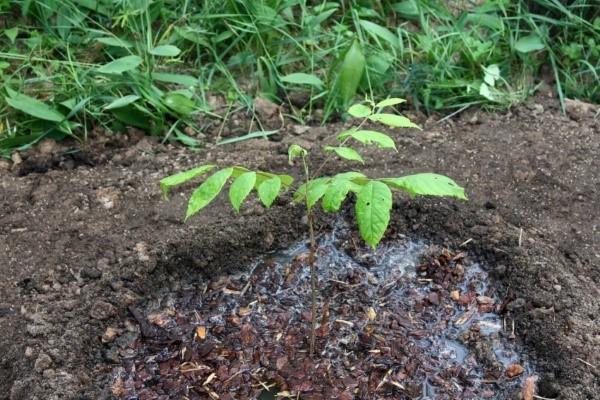 When choosing a place in the garden for a seedling, be guided by the requirements of a black walnut, namely:

Plant the tree so that the darker part of the trunk faces south.. 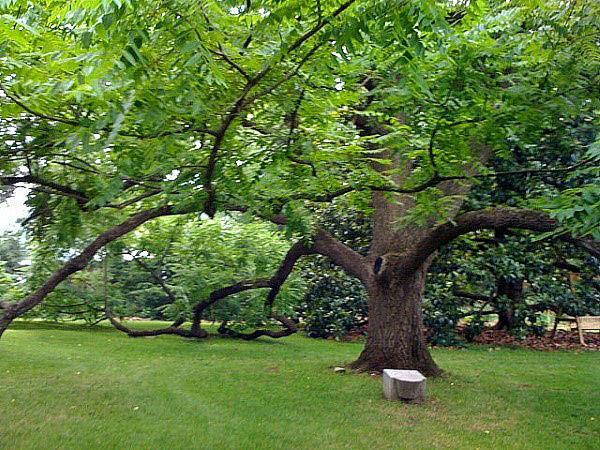 Recently, mycorrhization has become more and more popular among walnut growers – the colonization of the mycelium of fungi in the root system. For all nut crops, the black truffle is a symbiont fungus. So, walnut mycorrhiza allows you to accelerate the rooting of both seedlings and cuttings. Trees that develop together with mycorrhiza winter better, do not get sick and give higher yields. 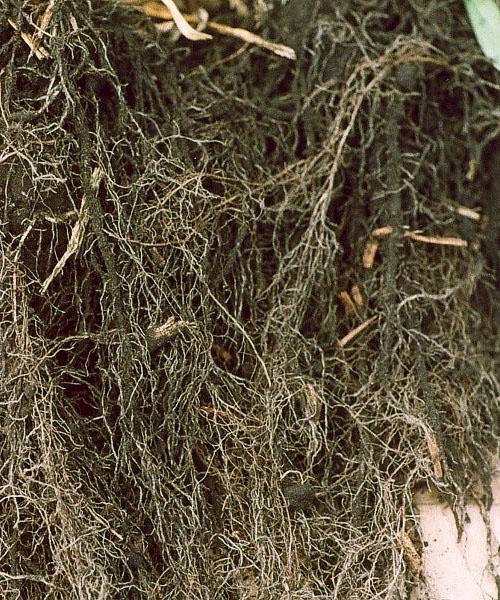 You can also apply this technology when growing black walnuts. Useful spores contain the drug Mikovital. Soak the roots of the seedling in it before planting or add to the water when watering. And your black walnut will start growing fast. 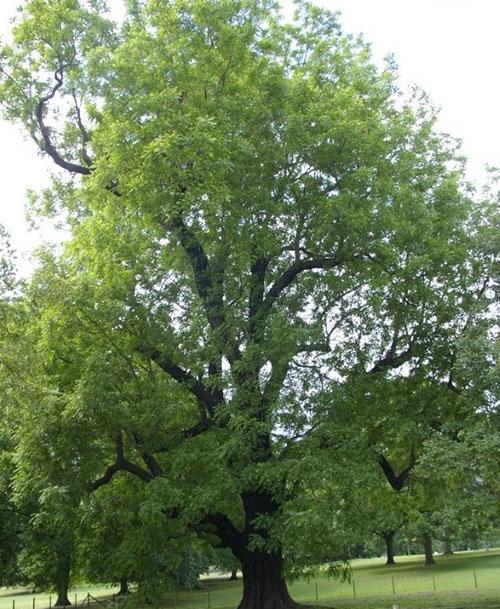 The largest representative of walnut trees is distinguished by increased requirements for moisture. It can even survive flooding for 1-2 months without damaging the roots. Moisture is especially important for young seedlings up to 2 years old. Water them often and abundantly, but only until early August. From this moment, the nut begins to prepare for winter, and excessive moisture will only reduce its winter hardiness..

Compared to walnuts, black has an increased resistance to low temperatures. He will survive the winter with 40 degrees of frost well. But young, still fragile trees are not ready for such an extreme temperature. Take this into account when growing black walnuts in the Moscow region and northern regions, and be sure to cover it for the winter.. 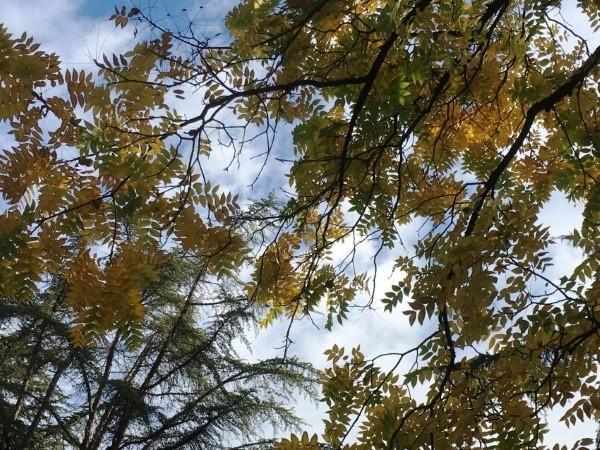 Curiously, the tree does not need formative pruning as such. Black walnut molds itself well. With age, its lower branches dry out, the trunk lengthens, and a lush crown remains at the top. You will only have to cut out frozen, damaged and improperly growing shoots in early spring..

If you do not want the nut to grow tall, cut the top growth point of the young trees.

With regard to fertilization, in natural conditions, nuts live without additional fertilizing. Rather, they feed themselves, since the fallen and decayed foliage of the black walnut is the main source of nutrients. He does not need mineral fertilizers, and he does not tolerate them well. The maximum that you can add is the spring introduction of organic matter in the form of humus, ash or manure.

Summing up, you can see that planting and caring for a black walnut is almost the same as growing a walnut. But the American guest winters well in our area and pamper him with healthy fruits. So try it and you will succeed!

How to grow black walnut – video