You Need to Know: All About Inedible Mushrooms 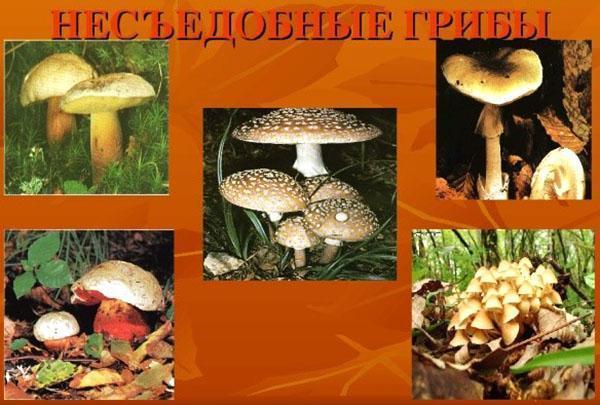 Experienced mushroom pickers know that among the forest gifts there are such specimens that will not bring harm, but will not bring pleasure either. We are talking about inedible mushrooms. They have nothing to do with poisonous species, but it is also impossible to eat such a “harvest”. This category includes mushrooms, the pulp of which does not contain dangerous toxins to cause severe poisoning, but at the same time has a combination of signs or one of them:

Some species, in addition to the description listed, have ugly growths on the caps.

We bring to your attention a short list of the most famous inedible mushrooms with a name, description and photo. We hope it will help you avoid annoying mistakes and choose only the most delicious mushrooms..

Ryadovka mushrooms belong to one of the species, the variety of which can confuse even an experienced mushroom picker. In addition to delicious edible and frankly dangerous poisonous, there are also inedible rows. The most famous of them:

Young spruce rows can be confused with conditionally edible greenfinches, but, unlike the first ones, greenfinches grow on a short fleshy leg and green color predominates in color.

Some scientists classify spruce and sulfur-yellow ryadovka as poisonous. Indeed, when eating them, you can get a mild eating disorder, but a small amount of toxins is usually not fatal..

Russula beauties or appearances are deceiving

Among the russula known to all, most mushrooms are considered edible and very tasty, and some especially risky mushroom pickers even use them without prior boiling. At the same time, there are varieties among them that even the most desperate eater will not dare to taste, and the reason lies in the pungent taste..

Inedible russula, which, however, are very beautiful in appearance, include:

Even a lump is tasteless

Many novice mushroom pickers think that milk mushrooms can be collected and eaten everything and then sincerely wonder why an appetizing-looking mushroom cut under a birch turns out to be bitter. This happens if inedible milk mushrooms come across, which are also called milkmen for their viscous milky juice released during a break.

According to some sources, the sticky milky belongs to poisonous mushrooms: a large amount of toxins can cause severe poisoning.

Among the handsome boletus mushrooms there are such “comrades” who, even after long cooking, do not become tasty. Their dense flesh contains a lot of bitterness, making it completely unusable.. 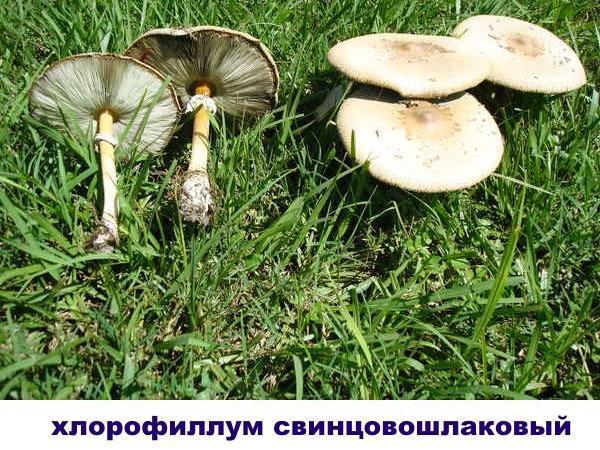 This inedible mushroom with a difficult name looks like an umbrella, and some scientists classify it as a poisonous species. The completely toxic properties of lead-slag chlorophyllum have not yet been fully studied, so today it is still classified simply as an inedible mushroom..

In order to avoid possible eating disorders, it is better not to take risks and not touch the mushrooms encountered during the walk.

Mushrooms have a cap like an umbrella. In older specimens, it is prostrate, but in youth it has a bell-shaped shape. The hat is painted gray-white, with a small tubercle in the center, which is darker. The skin on the surface of the cap of lead-slag chlorophyllum is dry, with remnants of the bedspread. The high leg is thin, white, but turns brown when broken. In young mushrooms, it is decorated with a ring on top. The pulp is white, turns pink on contact with air. 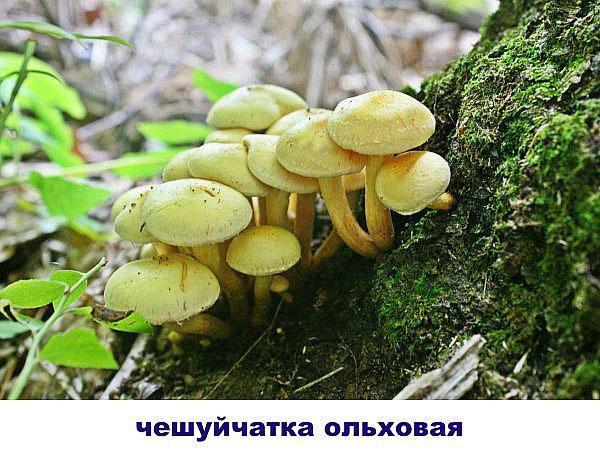 On the rotten remains of tree species at the end of summer, you can find small mushrooms with brittle pulp – alder flakes. The ocher-yellow cap in the center has a darker color, and at the edges there are the remnants of the bedspread. The brownish stem is first ringed, but then becomes smooth. Yellow pulp breaks easily and tastes very bitter.

For its fiery color, the mushroom is also called the alder moth.. 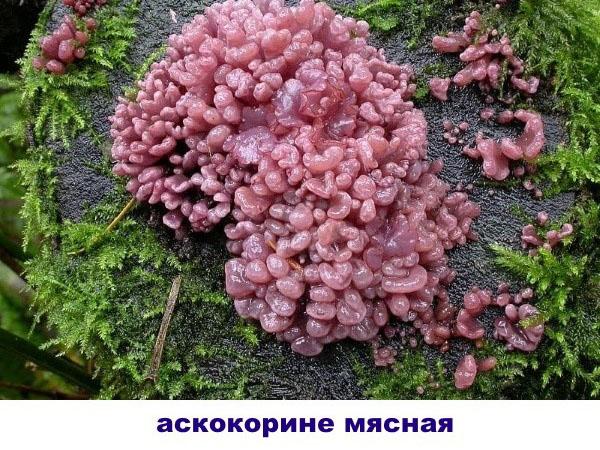 The one who definitely cannot be confused with other mushrooms is the tapered hebele, and all due to the fact that its long gray leg, covered with small brownish scales, is half hidden in the ground. But the hat is rather small, at first it is semicircular, then it is leveled. The skin is shiny, light brick, with ingrown scales. The flesh of a young gebeloma is sweet, but then the sweetness leaves, giving way to bitterness. It has no doubles, because of its taste it is not eaten.

Violet-lilac fleshy growths on trunks and stumps, it turns out, are also mushrooms called ascocorine meat. Indeed, in color they resemble fresh meat. The mushrooms themselves are very small, no more than 1.2 cm, at first they grow individually, but quickly merge into a solid dense carpet. The shape of an adult mushroom is varied: it can have a funnel in the center of the shiny cap, or it can be convex. The numerous family of inedible ascocorine mushrooms, growing on a tree, looks like a multi-tiered outgrowth, while each next “floor” has grown tightly to the previous one. There are mushrooms and legs, but they are very small, less than 1 cm.Although the pulp of mushrooms does not have a bitter taste or unpleasant odor, they are considered to be inedible due to their miniature size, which is rather difficult to process before cooking..

Going to the forest, remember – the external beauty of the mushroom can be deceiving, and can deliver at least chagrin. Carefully study the pictures of inedible mushrooms selected in the article before the trip. Be careful and carefully choose only edible mushrooms, and in case of the slightest doubt, it is better to return home empty-handed than to bring frankly unpleasant surprises. Have a good hunting”!

Mushroom picking in the taiga – video