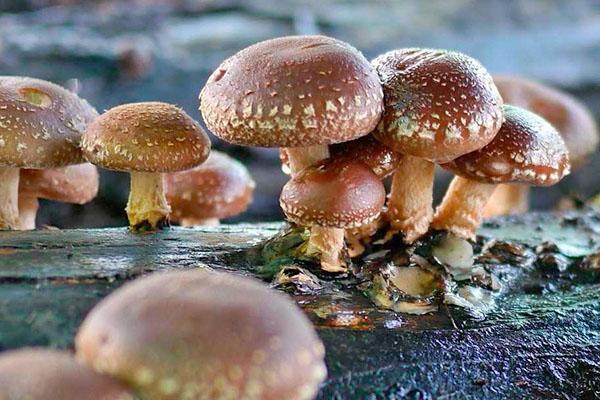 Mushrooms are a separate kingdom of the plant world, combining not only the characteristics of plants, but also animals. There are many representatives, many of which are consumed for food. Shiitake mushrooms – an edible specimen that has the same popularity as champignons. 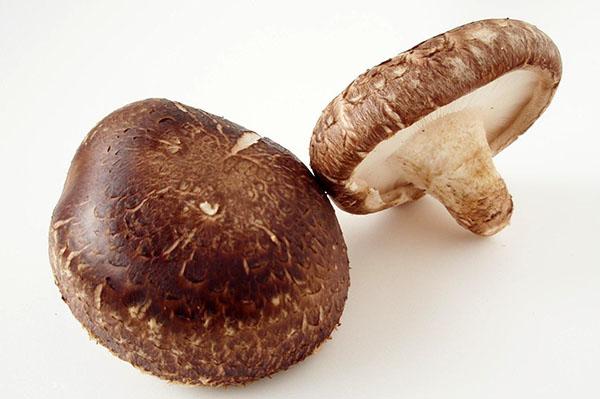 Shiitake is a woody lamellar mushroom belonging to the Non-Flame family. It is also called shiitake, xiang gu, and the people in a simple way – black mushroom. Its homeland is China. But shiitake is widely cultivated in Southeast Asia. As a rule, it is grown on beech trees..

You can identify a mushroom by its appearance: a brown hat 5-25 cm in diameter, and its tone changes from light to dark. Along the edge, the shade is lighter and there is a fringe. The entire surface of the cap is covered with white scales..

The pulp and plates of the mushroom are white. The latter, when pressed, acquire a brown tint. The inner part of the leg is rigid, also painted white, which darkens when pressed.

Shiitake mushroom has a low calorie content, which means it can be included in the diet of those who seek to reduce their weight.. 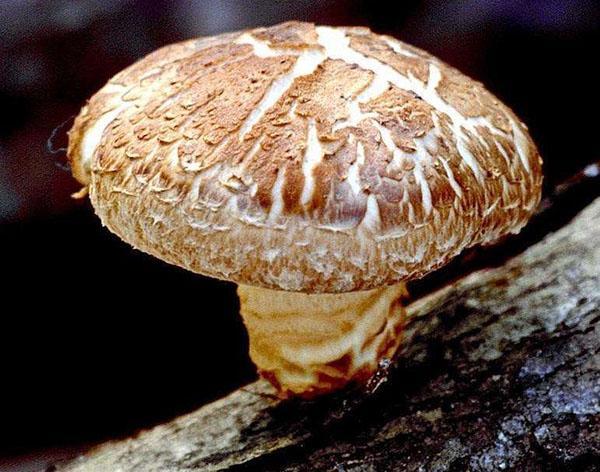 As for the beneficial properties, the mushroom has a lot of them. And all thanks to the vitamin and nutritional composition. So, a mushroom: 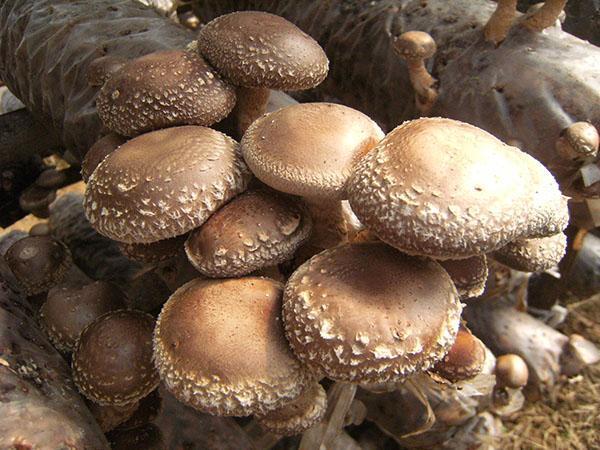 Despite the undeniable benefits, shiitake mushrooms can be harmful, especially if they are uncontrolled. Not to mention the possible manifestation of an allergic reaction.

Mushrooms contain chitin – in large quantities it is very dangerous.

It is forbidden to eat mushrooms:

You should also be careful when using medications, tinctures and extracts based on shiitake. Regardless of the purpose for which you use them, for therapeutic or prophylactic, you should definitely consult a doctor.

In nature, the mushroom grows mainly on beeches. But how to grow shiitake mushrooms at home? There are two ways. 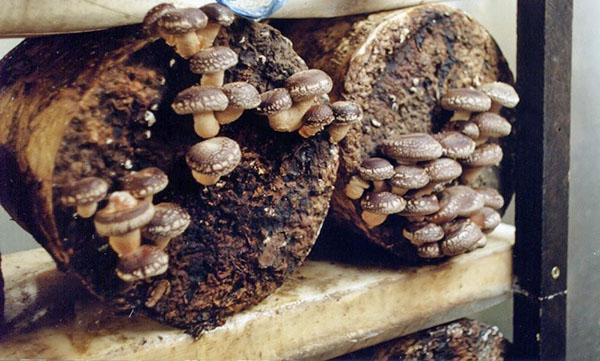 Use only that wood, after the felling of which at least 2-3 months have passed.

Before planting the mycelium, the wood, if necessary, should be soaked in water. This is necessary so that its moisture content is 40%. Next, holes are drilled at a distance of 20-30 cm from each other, measuring 10-15 mm / 4-6 cm (width * depth). The distance between the rows is 7-12 cm.

The mycelium on the grain is poured into the holes obtained and covered with garden varnish or closed with corks. After the logs are transferred to a protected room, wrapped in various materials that retain moisture and, having created favorable conditions (15-20 ° C), wait for “shoots”. When a whitish coating appears and the log creates a dull sound when tapped, the log with mycelium is taken out to an open place where there is damp earth, there are no drafts and sunlight.

The plantation is capable of bearing fruit for 5-8 years. This method of growing can also be used in heated rooms, but on condition that the humidity in them is more than 85%. A large yield is obtained when “planting” beech or oak. 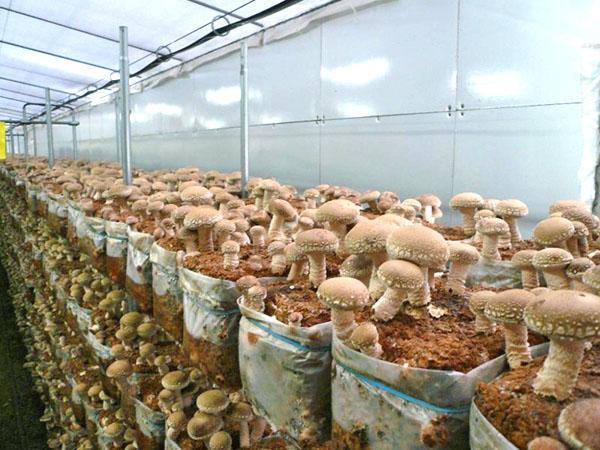 This method of growing shiitake involves the use of a “substrate” consisting of 60-90% wood shavings, sawdust, small chips. Other auxiliary components: husk, straw, organo-mineral additives.

The grains are sown at the rate of 2-5 kg ​​/ 100 kg of substrate. When growing shiitake, right before fruiting, the packaging should be completely removed from the block, since it is impossible to determine where the mushroom will grow.

To stimulate the growth of black fungus, blocks with mycelium must be regularly “bathed” or irrigated.

The time required for the conception of mushrooms is 5-7 days. You can harvest every month. Such blocks “work” only 3-5 months.

How to cook shiitake mushrooms 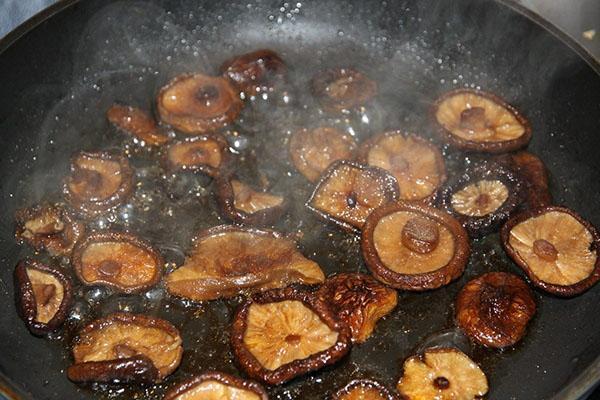 Shiitake mushrooms are a popular ingredient in oriental cuisine. The hat is most often used for food, since it is much softer than the leg. Soups, pastries, drinks, sauces, and even desserts are prepared with it. Remarkably, in Japan, black mushroom is used to make yogurt rich in potassium..

Mushrooms are popular for the fact that they are able to “accept” the taste of other constituent components of the dish, while not interrupting it. Shiitake can be eaten raw, but as practice shows, many people do not like its taste..

There are many options for preparing shiitake mushrooms. The duration of the heat treatment is maximum 10 minutes. When boiling, they are ready in 3-4 minutes (proportions of 0.2 liters of water for every 1 kg of mushrooms). As for the extinguishing, it is somewhat longer – half an hour..

It is best to use specimens with a hat no more than 5 cm, 70% open, having a uniform dark brown color and a velvety surface. 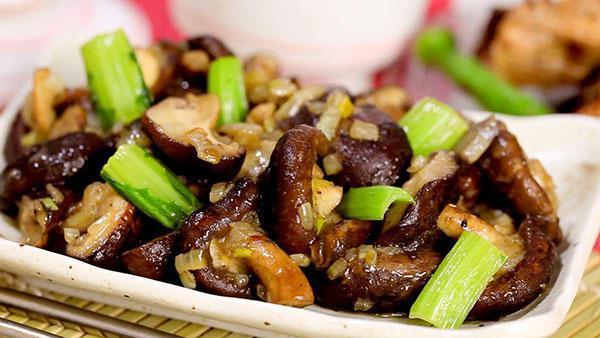 The easiest way to cook is to fry the washed mushrooms in vegetable oil with constant stirring. When all the excess water has evaporated, the mushrooms are ready and take on a meaty flavor. Almonds, onions, walnuts and various spices are added to them. Shiitake goes well with udon, vegetables, rice and Asian noodles, any meat, seafood, rice, fish, pasta, various sauces.

When using dried shiitake mushrooms, they must first be soaked to restore their shape, and then squeezed, cut into pieces and cook as usual..

The world of mushrooms is limited not only to mushrooms and oyster mushrooms. Shiitake may not be familiar to many, but they make very tasty dishes. Try it, you will definitely like it!