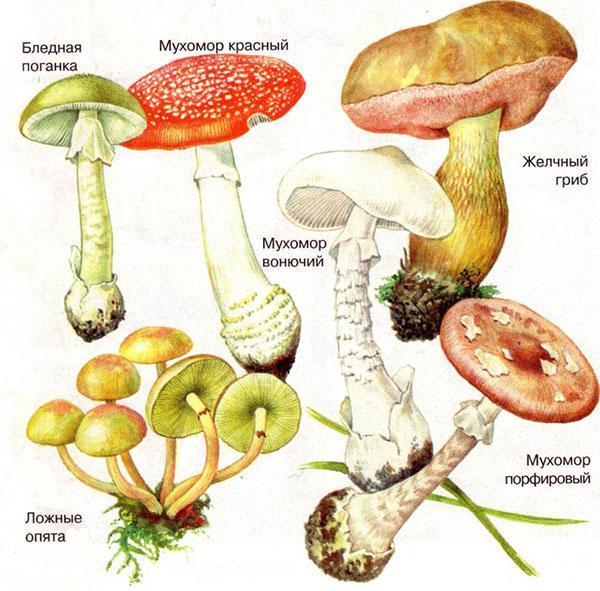 What is the most important thing for a mushroom picker who goes to the forest to “quietly hunt”? No, not a basket at all (although you will also need it), but knowledge, especially in relation to which mushrooms are poisonous and which you can safely put in the basket. Without them, an outing for a forest treat can smoothly turn into an urgent trip to the hospital. In some cases, it will turn into the last walk in life. To avoid disastrous consequences, we bring to your attention a brief information about dangerous mushrooms, which must not be cut off under any circumstances. Take a closer look at the photos and remember how they look forever. So let’s start. 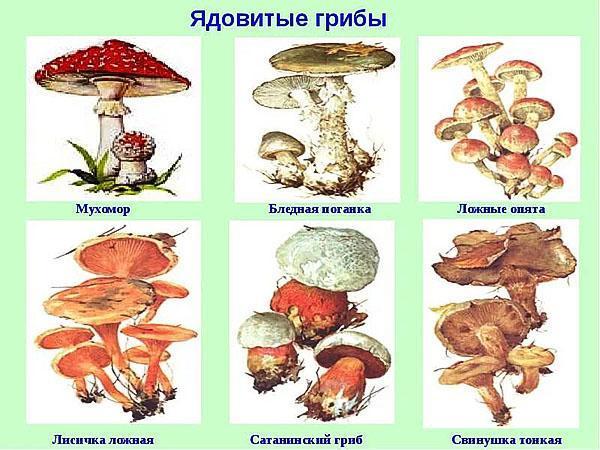 The most dangerous mushroom is the pale toadstool 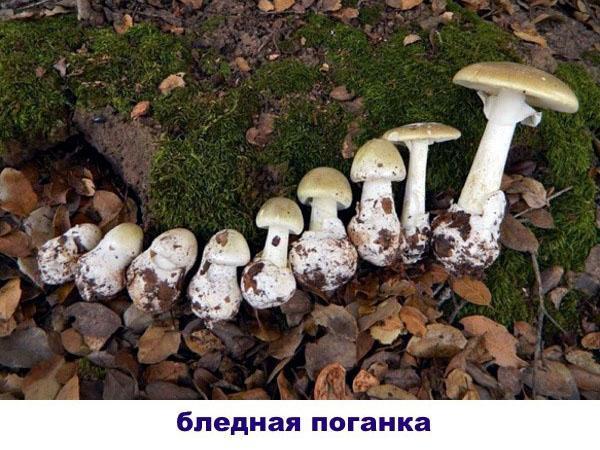 Among poisonous mushrooms, the first place in terms of toxicity and frequency of fatal poisoning is the pale grebe. Its poison is resistant to heat treatment, moreover, it has belated symptoms. Having tasted the mushrooms, the first day you can feel like a completely healthy person, but this effect is deceiving. While it takes precious time to save lives, the toxins are already doing their dirty work, destroying the liver and kidneys. From the second day, symptoms of poisoning are manifested by headache and muscle pain, vomiting, but time is lost. In most cases, death occurs..

Even just for a moment touching the edible mushrooms in the basket, the poison of the toadstool is instantly absorbed into their hats and legs and turns the harmless gifts of nature into a deadly weapon.

Toadstool grows in deciduous forests and in appearance (at a young age) slightly resembles champignons or greenfinches, depending on the color of the cap. The cap can be flat with a slight bulge, or it can be egg-shaped, with smooth edges and ingrown fibers. The color varies from white to greenish-olive, the plates under the cap are also white. The elongated leg at the base expands and is “chained” into the remains of a film-bag, which hid a young mushroom underneath, and has a white ring on top.

When a toadstool is broken, the white flesh does not darken and retains its color.

Even children know about the dangerous properties of the fly agaric. In all tales, it is described as a deadly ingredient for making a poisonous potion. Everything is so simple: the red-headed mushroom with white spots, as everyone saw it in the illustrations in the books, is not at all a single specimen. In addition to him, there are other varieties of fly agaric that differ from each other. Some of them are very edible. For example, Caesar mushroom, ovoid and blushing fly agaric. Of course, most species are still inedible. And some are life-threatening and it is strictly forbidden to include them in the diet..

The name “fly agaric” is composed of two words: “flies” and “pestilence”, that is, death. And without explanation, it is clear that the mushroom kills flies, namely its juice, which is released from the cap after sprinkling it with sugar.

The deadly poisonous fly agaric species that pose the greatest danger to humans include: 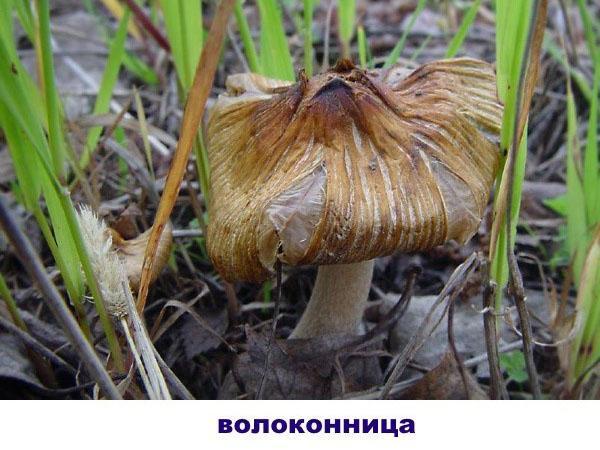 The poisonous mushroom got its name for its peculiar structure: often its cap, the surface of which is covered with silky fibers, is also decorated with longitudinal cracks, and the edges are torn. In the literature, the mushroom is better known as a fibrous fungus and has a modest size. The height of the leg is slightly more than 1 cm, and the diameter of the hat with a protruding tubercle in the center is a maximum of 8 cm, but this does not prevent it from remaining one of the most dangerous.

The concentration of muscarine in the fiber pulp exceeds the red fly agaric, while the effect is noticeable after half an hour, and within a day all the symptoms of poisoning with this toxin disappear. 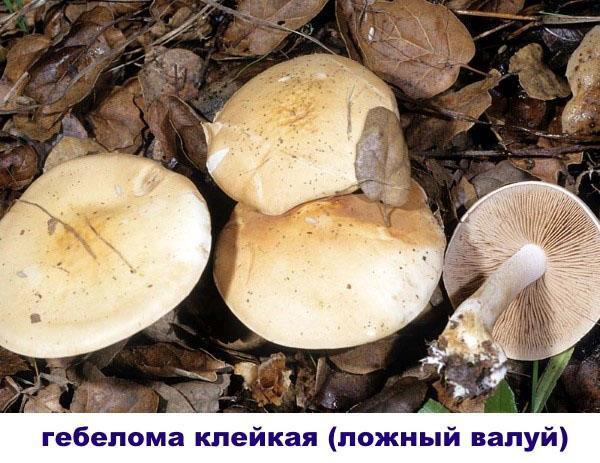 This is exactly the case when the title matches the content. It is not for nothing that a false Valui mushroom or a horseradish mushroom was dubbed by the people with such an indecent word – not only is it poisonous, but also the pulp is bitter, but the smell is simply disgusting and not at all mushroom. But on the other hand, it is thanks to its “aroma” that it will not be possible to get into the trust of a mushroom picker under the guise of a russula, to which Valui is very similar..

The scientific name of the fungus sounds like “sticky hebeloma”.

False valui grows everywhere, but most often it can be seen at the end of summer on the light edges of coniferous and deciduous forests, under an oak, birch or aspen. The cap of a young mushroom is creamy white, convex, with the edges tucked down. With age, its center bends inward and darkens to a yellow-brown color, while the edges remain light. The skin on the cap is beautiful and smooth, but sticky. The bottom of the cap consists of adherent plates of gray-white color in young Valuev, and dirty yellow in old specimens. The dense bitter flesh has a corresponding color. The leg of the false valuy is quite high, about 9 cm.At the base it is wide, then tapers upwards, covered with a white bloom, similar to flour.

A characteristic feature of the “horseradish mushroom” is the presence of black blotches on the plates. 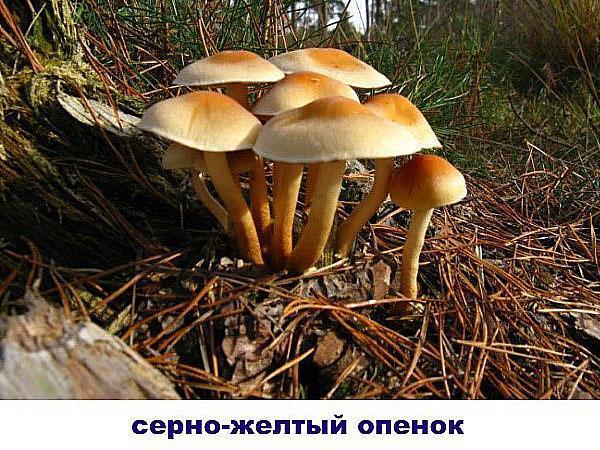 Everyone knows that mushrooms grow on stumps in friendly flocks, but there is such a “relative” among them, which outwardly practically does not differ from tasty mushrooms, but causes severe poisoning. This is a false sulfur-yellow mushroom. Poisonous twins live in small groups on the remains of tree species almost everywhere, both in forests and in clearings between fields..

The mushrooms have small caps (maximum 7 cm in diameter), gray-yellow in color, with a darker, reddish center. The pulp is light, bitter and smells bad. The plates under the cap are firmly adhered to the stem; in the old mushroom, they are dark. The light leg is long, up to 10 cm, and even, consists of fibers.

You can distinguish between “good” and “bad mushrooms” by the following criteria: 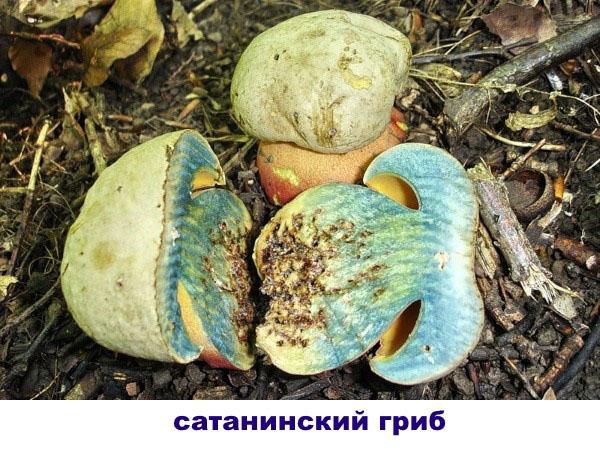 The massive leg and dense flesh of the satanic mushroom make it look like a porcini mushroom, but eating such a handsome man is fraught with severe poisoning. Boletus satanic, as this species is also called, tastes pretty good: neither you smell, nor the bitterness characteristic of poisonous mushrooms.

Some scientists even attribute it to conditionally edible mushrooms, if it is subjected to prolonged soaking and prolonged heat treatment. But no one is taken to say exactly how many toxins boiled mushrooms of this type contain, so it is better not to risk your health.

Outwardly, the satanic mushroom is quite beautiful: the off-white fleshy cap, with a spongy yellow bottom, which turns red over time. The shape of the leg is similar to that of a real edible boletus, just as massive, in the shape of a barrel. Under the cap, the leg becomes thinner and turns yellow, the rest is orange-red. The flesh is very dense, white, pinkish only at the very base of the leg. Young mushrooms smell nice, but old specimens give off a disgusting smell of spoiled vegetables.

You can distinguish between satanic pain and edible mushrooms by cutting the pulp: upon contact with air, it first acquires a red tint, and then turns blue. 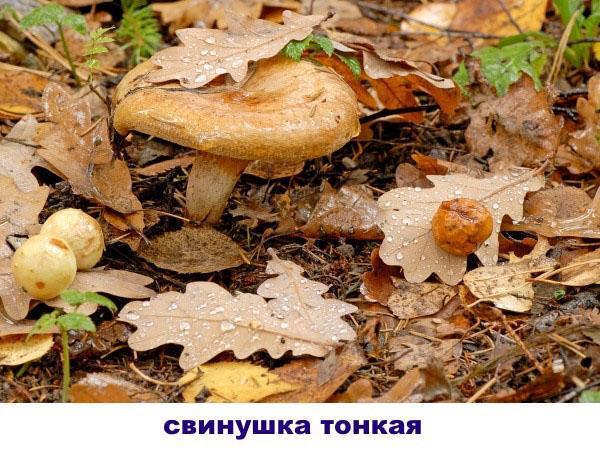 Disputes about the edibility of pigs were stopped in the early 90s, when all types of these mushrooms were officially recognized as dangerous to human life and health. Some mushroom pickers to this day continue to collect them for eating, but this should never be done, since pig toxins can accumulate in the body and symptoms of poisoning do not appear immediately.

Outwardly, poisonous mushrooms are similar to milk mushrooms: they are small, with squat legs and a fleshy round head of a dirty yellow or gray-brown color. The center of the hat is deeply concave inward, the edges are wavy. The fruit body is yellowish in cross-section, but darkens quickly from the air. Pigs grow in groups in forests and plantings, especially they love trees felled by the wind, located among their rhizomes.

There are more than 30 varieties of pork ear, as mushrooms are also called. All of them contain lectins and can cause poisoning, but the thin pig is recognized as the most dangerous. The cap of a young poisonous mushroom is smooth, dirty olive, and becomes rusty over time. The short stem is in the shape of a cylinder. When the mushroom body is broken, a clear smell of rotting wood is heard.

Such pigs are no less dangerous:

Along roads and roadsides, slender mushrooms grow in abundance on high thin legs with flat, wide-open caps, reminiscent of an umbrella. They are called umbrellas. The cap, indeed, as the fungus grows, opens and becomes wider. Most varieties of umbrella mushrooms are edible and very tasty, but there are also poisonous specimens among them..

The most dangerous and common poisonous mushrooms are the following umbrellas:

Ryadovka mushrooms have many varieties. Among them there are both edible and very tasty mushrooms, and frankly tasteless and inedible species. And there are also very dangerous poisonous rows. Some of them resemble their “harmless” relatives, which easily mislead inexperienced mushroom pickers. Before going into the forest, you should look for a person as a partner. He must know all the intricacies of the mushroom business and be able to distinguish “bad” rows from “good”.

The second name of the ryadovok is talkers.

Among the poisonous talkers, one of the most dangerous, capable of causing death, are the following rows: 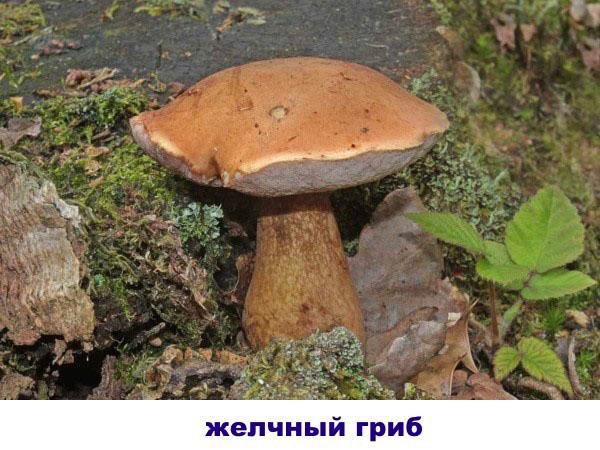 Most scientists classify the gall fungus as inedible, since even forest insects do not dare to taste its bitter pulp. However, another group of researchers is convinced that this mushroom is poisonous. In the case of eating dense pulp, death does not occur. But the toxins contained in it in large quantities cause colossal harm to the internal organs, in particular the liver..

People call the mushroom gorchak for its peculiar taste..

The dimensions of the poisonous mushroom are not small: the diameter of the brown-orange cap reaches 10 cm, and the creamy-red leg is very thick, with a darker mesh-like pattern in the upper part.

The gall mushroom looks like a white mushroom, but, unlike the latter, it always turns pink when it breaks. 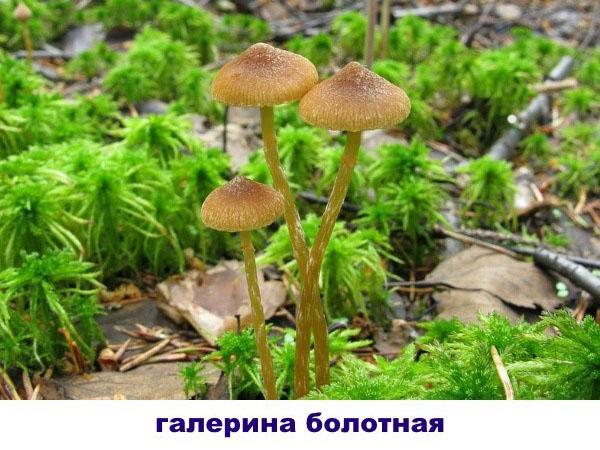 In the swampy areas of the forest, in the thickets of moss, you can find small mushrooms on a long thin stem – marsh gallery. A breakable light yellow leg with a white ring at the top can be easily knocked down even with a thin twig. Moreover, the mushroom is poisonous and you still cannot eat it. The gallerina’s dark yellow hat is also fragile and watery. At a young age, it looks like a bell, but then straightens, leaving only a sharp bulge in the center.

This is not a complete list of poisonous mushrooms, in addition, there are still many false species, which are easy to confuse with edible ones. If you are not sure which mushroom is under your feet, please walk by. It is better to make an extra circle through the forest or return home with an empty wallet than to suffer from severe poisoning later. Be attentive, take care of your health and the health of people close to you!

Video about the most dangerous mushrooms for humans