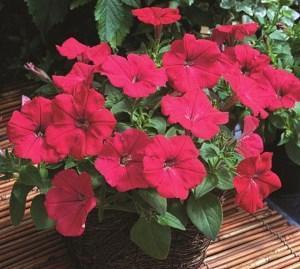 There is probably no more popular flowering plant today than petunia. It is grown by professionals, landscape designers and housewives. Thanks to their long bloom, petunias adorn our gardens, balconies, city beds and outdoor flowerpots throughout the summer..

According to reviews, petunia Ramblin F1 (Petunia Spreading) is the most popular among lovers of flowering gardens. Erect shoots in it rise by 30-35 cm, but the lateral ones are up to one meter long. The beauty of petunia cascading Ramblin won the hearts of flower growers with a dense crown of delicate flowers that look great in containers, hanging pots and garden beds.

The catalog of the Ramblin petunia group has about a dozen varieties that differ in the color of the inflorescences: 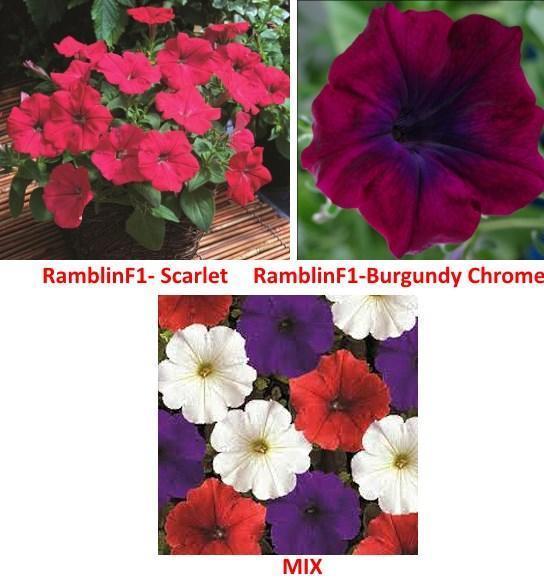 All species are uniform in terms of flowering time. When grown in a flowerpot on a leg, the plant forms a blooming “ball”, completely covering the planter.

At first glance, it may seem that petunia Ramblin is an unpretentious, undemanding flower that will delight the eye until the frosts with exuberant flowering. In fact, everything is quite different. To get a spectacular “hat” of large flowers on powerful branchy shoots, as in the photo of Ramblin petunia, you need to make a lot of effort and knowledge..

When buying seeds, it is advisable to choose a European supplier of seed material, which has proven its reliability. Sometimes growers are guided only by the color of the inflorescences of the variety, not paying attention to the group or series, the name of which comes first in the name of the flower.

On the Russian market, seeds of hybrid petunias are presented, which are not cheap and are sold shaken. If there are more than 10 seeds in a bag, then we can talk about a fake or about replacing the original seeds of wild plants. It is necessary to make sure that the seeds of the cascade petunia ramblin are in the package (carefully read the description of the group), since the ampelous plant will definitely not work out of the seeds of the bush variety..

If it is possible to illuminate the seedlings, seeds can be sown from January, but the best sowing period for Ramblin petunia is the end of February – beginning of March.

The seeds are very small, so there is no point in large pots, it is enough to take a plastic cup or seedling pot for each species. Any light soil from a flower shop is fine for petunias. If you use your own land from the garden, you need to add coconut briquette, vermiculite or old loose humus to it.

After sprinkling the seeds on moistened soil, they do not sprinkle them, but simply cover the container with glass or tightly tie it with plastic wrap. At a room temperature of + 200C, seedlings will appear in a week.

After the appearance of the first leaf, the glass can be removed, and at the age of the third leaf, the seedlings must be picked off, each sprout into a separate glass.

Caring for plantings of petunia Ramblin

If petunia Ramblin F1 will grow in a pot, pots or container, it must be borne in mind that for the full development of the root system and abundant flowering, you will need from 6 to 10 liters of fertile soil per plant, which can provide nutrition to the plant for the entire season..

To avoid diseases, fresh humus or manure is not recommended to be added. Petunia Ramblin is unpretentious to growing conditions, but at the first stage, the seedlings need to be shaded, and after the first buds appear, increase the degree of lighting.

The rapid growth of shoots and peduncles requires abundant nutrition and daily watering. In dry, hot summers, plants need to be watered twice a day to keep the soil constantly moist. Ramblin F1 petunias bloom two weeks earlier than other large-flowered varieties. In order for flowering to continue throughout the season, it is necessary to fertilize with liquid complex fertilizer once every two weeks..

Reviews of petunia Ramblin confirm that the plant does not require pinching at all. With proper care, you can get a powerful plant with large, showy flowers. Cascading petunia Ramblin looks great from a mixture of varieties (mix), creating a fun cycle of bright colors.