Petunia Typhoon – the main characteristics of the plant

Modern petunias Typhoon are a family of annual or perennial plants with slender stems and bright, memorable flowers. The presented culture has a specific bush shape, while its branches can reach 15-20 cm in height, and the leaves – 6-13 cm in diameter.

What species is the Typhoon petunia?

Reputable experts identify only two key types of petunias, such as: 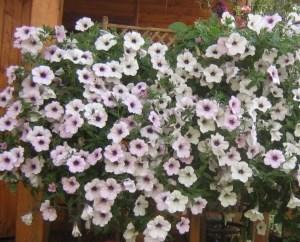 The large-flowered analogue of petunia boasts one (maximum two) large flowers, the diameter of which is estimated at 8-10 cm. They are very demanding on the soil, and also do not tolerate cold well, therefore it is strongly recommended to grow them in hanging baskets. In addition, the fragile leaves of this culture are susceptible to damage from heavy rainfall, as a result of which they must be planted under roofs or sheds..

Multi-flowered plants, to which the Typhoon petunia belongs, have a developed root system, many stems and small leaves. Their numerous flowers usually reach no more than 5-6 cm in diameter and are characterized by various attractive colors, ranging from pure white to rich scarlet or brown shades. Multi-flowered petunia is rightfully considered an amazing plant that can decorate an alley, a summer flower bed or a greenhouse..

Main characteristics of the Typhoon petunia

One of the main varieties of multi-flowered petunias is Typhoon, which has long stems and many flowers of all kinds of shades. They are valued primarily for their abundant long flowering and a pleasant smell that spreads several meters from the plant. The culture in question prefers sunny areas along with light loamy or sandy soils that do not interfere with the development of its root system..

At the same time, petunia Typhoon does not like excessive moisture, and with an abundance of nitrogen-phosphate fertilizers, the deciduous system can drown out flowering..

Watering the crop should be done only at the beginning of growth, but when the plant reaches standard sizes, they should be stopped, since this variety of petunia better tolerates heat and lack of moisture than its excess. 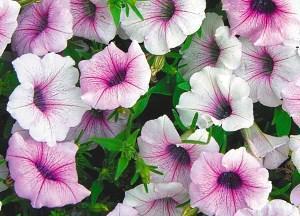 Perhaps one of the most popular varieties of the described plant was the petunia Typhoon Silver – an unusually powerful culture that blooms throughout the summer season, forming a network of dense stems over 1.5 m long.It quickly recovers after heavy rains, strong winds and other damage, and its flowering with proper care continues until the first frost. 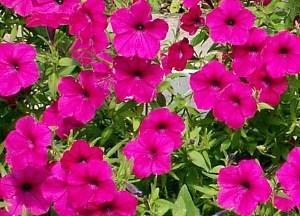 Giant petunia Typhoon Cherry is also in great demand among domestic gardeners. It has a unique speed, forming a dense shrub with hundreds of flowers within a few weeks after planting the seedlings. This plant is very unpretentious in the growth process, and a developed root system contributes to the receipt of moisture from the deep layers of the soil..

Another wonderful plant that can often be seen in summer cottages is the Typhoon Tornado petunia. It also forms a shrub with stems up to 1.5 m long, and its small flowers can be of various colors (pale pink, white, red, purple, etc.). This culture is planted in early June at a distance of at least 30-40 cm from neighboring plants..

Thus, the unique Typhoon petunias will be an excellent decoration, both for a country house and for a city balcony, allowing you to admire beautiful flowers for a long time..