Planting potatoes in the Urals 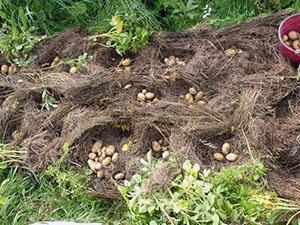 Experienced gardeners have repeatedly noticed that potato bushes planted at the very edge of the allotment are usually the tallest and most prolific. And all because it is in this part of the garden that the grass weeded at the very beginning of the season is folded. So she remains lying at the end of each potato row. Then this herb decays, is partially eaten by worms and insects and as a result – an excellent potato bush that gives a double harvest. Summer residents living in the Urals have long been familiar with this method and successfully apply it, and the yield of potatoes in their plots can only be envied.

Growing potatoes “under straw” in the Ural lands 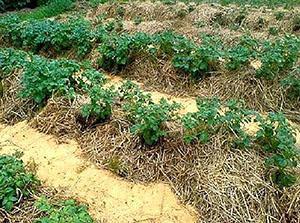 You can get a great harvest without a lot of effort and money. The method is simple from the point of view of practical implementation, but for its successful implementation, you will have to break several established dacha stereotypes. What exactly needs to be done to get a rich harvest?

If you have to attend to planting potatoes in the Urals, then, first of all, you should decide how much land will be allocated for this root crop. According to the rules of the “under straw” method – the allotment should occupy exactly half of the usual. That is, if earlier potatoes occupied 4 hundred parts, now they are supposed to grow by two. And the remaining half should now be planted with cereals, which will act as straw in the next season. For these purposes, oats, or rye, are best suited, and in the absence of such, peas. The more plant residues you get in the fall, the more potatoes you can harvest in the summer..

The land intended for potatoes cannot be dug or plowed, not by hand, not with a walk-behind tractor. 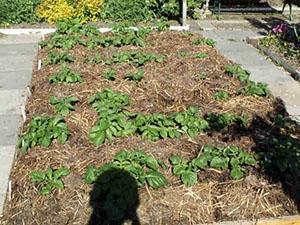 And this is not at all because it is quite difficult to dig up a plot covered with straw, but simply because digging literally “kills” the land on the site. In the season, such an allotment will be stone in the literal sense of the word..

You can’t dig, because:

Weeds, which at the time of planting occupy the potato half of the plot, also need to be dug up and spread on top of the straw. They have not yet had time to give seeds, so self-sifting is excluded. This tops and straw from last year will make a wonderful mulch.

So that when weeding potatoes, the aisles are not trampled, you need to put a board that is easy to move after you. And at the end of the potato beds, it would be nice to drive in wooden stakes. This greatly simplifies the weeding process..

Late planting and other nuances of growing potatoes in the Urals

It is necessary to plant potatoes in the dachas of the Urals late, due to the climatic conditions of this latitude. 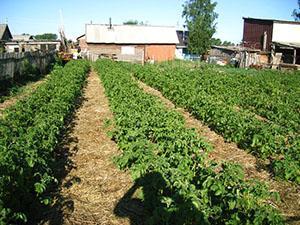 In the Urals, soil frosts are very common, sometimes even in June. Therefore, tubers planted early can sprout just for the period of frost. This will not happen with a late landing. It is best to plant a root crop after June 10-12, when the danger has already passed.

When considering how to grow potatoes in the conditions of the Ural strip, you need to take into account the fact that late planting will insure it not only against sudden frosts, but also allow the bushes to grow under optimal temperature and humidity conditions. Planting potatoes in a heated ground means insuring them against various diseases. In addition, in the heated soil, the processes of decomposition of the nitrogen-containing substance have already started, to the point where plants can assimilate it. And the straw, which lies on top of the ground, provides a lot of nitrogen, which is important for successful growth and tuberization. The bushes will be powerful, and the potatoes themselves are very large. This growing method is especially suitable for early and middle varieties.. 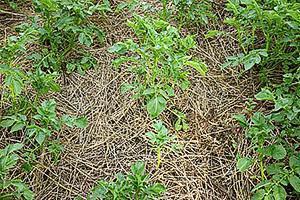 When growing, you need to abandon the use of poisons that poison the Colorado potato beetle. Since late planting guarantees its absence on the potato plot. The beetle itself is small in the Urals, since its larvae do not survive in a harsh winter. At the moment when the massive years of the Colorado potato beetle begins, there are not even shoots on the late-planted plantation, which means that he will simply have nowhere to lay offspring, and this disaster will not affect this particular potato planting.

Correctly growing potatoes, and videos on the Internet are simply full of visual lessons on the cultivation of this vegetable crop in the Urals, it is necessary to use only those tools that fully fulfill their task. A hoe, a narrow rake and a garden pitchfork are best suited for these purposes. The pitchfork will be useful in the fall, for digging out tubers, the rake – in the spring, when they are embedded in the soil. And planting, furrowing, sowing cereals, hilling and weeding can be organized using a hoe. Fokin’s flat cutter is not suitable for hilling potatoes, since its blades are narrow and light. 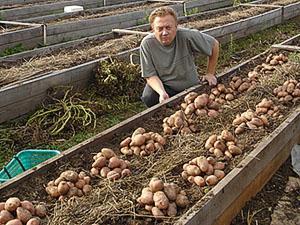 The plot on which potatoes are planted “over straw” must be changed every year. That is, in one year, potatoes are planted, for example, on the right half of the plot, and oats on the left, and the next year, the location of these crops on the plot must be changed. The classic rule that says that potatoes can be grown in one place only once every four years does not work here.

Immediately before hilling, all weeds that have grown on the plantation are excised with a hoe and remain on the bed itself. With a mixture of this green mass and last year’s straw, the potatoes are earthed. In this case, only a narrow layer of the earth itself is affected. It turns out that each bush is covered with humus.

Potatoes under the straw – video