Why don’t potatoes come up? If the weather is warm, and the soil has warmed up under the rays of the sun up to 8-10 C °, the first shoots of potatoes appear on the plantation in about 10-12 days. However, in protracted springs, when May suffers from a lack of sunny days, and the atmospheric thermometer does not rise above + 20 … +22 C °, the sprouts need a little more time to break through the layer of earth and please the summer resident with their height. Under such conditions, they appear on the surface not earlier than after 20-25 days..

Be sure to ask experienced gardeners or agricultural specialists how many days potatoes emerge after planting directly in the climatic zone where you live and plant the prepared tubers. For example, for the southern regions, the onset of phase 1 (emergence of seedlings) after 20 days is in most cases a deviation from the norm, but for the northern regions this period is quite acceptable.

But, unfortunately, it also happens that all the deadlines pass, and there are still no green rows in the garden. Anxiety and related questions involuntarily arise. Why don’t potatoes come up? What prevents him from gaining the strength of growth? What to do: wait for shoots or plant again?

The reasons why potato shoots do not appear 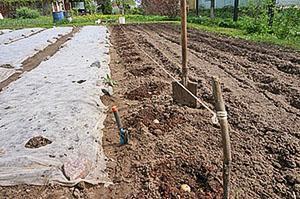 The planted tubers, as well as the developed plants, are “afraid” of the vagaries of nature. The following phenomena pose the greatest threat to planting material: 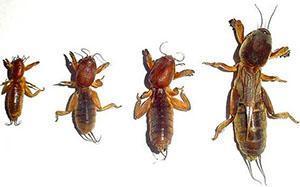 Only planted potatoes are a tasty morsel for insect pests that live in the soil that have woken up after hibernation. Among the most notorious types of malware:

They are especially gluttonous: they make moves in the tubers, gnaw at the sprouts. Inhabited in large quantities on the site, they can destroy up to 80-100% of seed tubers. 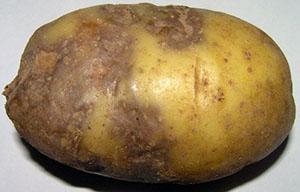 Inexperienced or unscrupulous preparation of tubers for planting reduces the percentage of their germination by 50-100%. To avoid such an extremely negative result, it is strictly prohibited to:

If there is a need to buy potato seeds, in no case should you go to a supermarket or a grocery store for them. Tubers intended for human consumption, as a rule, are treated with a special chemical solution so that they retain their presentation for a longer time and do not sprout.

How to achieve high germination of potatoes?

Experienced gardeners recommend that in the process of planting plantation be guided by the rule of “three dozen”, or three signs: 10 C ° – soil temperature; 10 cm – the depth of the landing hole; 10 days is the time for shoots to appear. In their words, this is the best recipe for getting rid of the alarming question “why potatoes don’t sprout?”

Take these five operations as a mandatory minimum, and the chances of a high potato yield will increase many times over..

Secrets of a high yield of potatoes – video