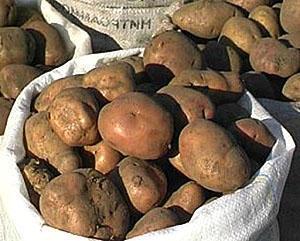 It is not enough to harvest a large potato crop. It is necessary to ensure that the ware potatoes retain their nutrients for as long as possible. Selected potatoes for seeds are stored under slightly different conditions. Only by observing the temperature regime and ventilation can damage to the tubers be avoided.. 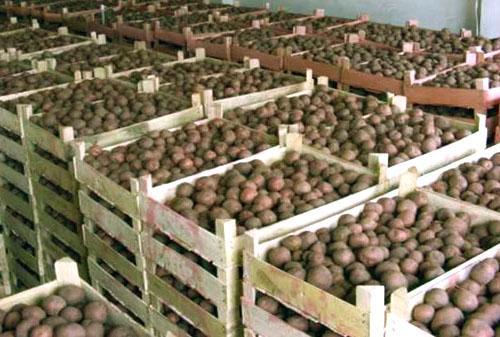 Root crops are harvested in dry weather. At the same time, only undamaged healthy tubers are selected for storing potatoes. The rest of the crop is separated for quick consumption in the first autumn months. Selected potatoes from the pile are collected in a container and quarantined in a dark, cool, ventilated room for 2 weeks. During this time, late blight and other diseases should appear with dark spots on the surface of the peel and insignificant imperceptible damages cork up. After that, a bookmark is made, observing the storage conditions for potatoes.

Before laying potatoes in the cellar, you need to prepare.

You can store potatoes until the new harvest in various ways, depending on the climatic zones and the capabilities of the owner: 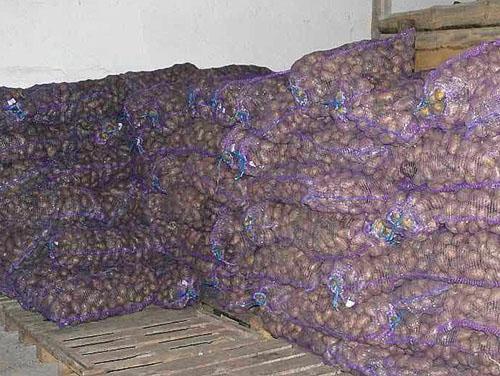 The most common is storing potatoes in a cellar. In this case, the basement must have ventilation holes, be prepared for harvesting, that is, dried and disinfected. Storage facilities provide for the device of special bins or boxes with ventilation holes. The crop is laid in boxes for storing potatoes or in bulk, it does not matter. The main thing is that an equilibrium temperature of 2-4 degrees is quickly established in the basement, the most comfortable for the preservation of nutrients. Air humidity should be within 85-90%.

Recently, a method has been practiced when the prepared crop is packed in mesh bags of 20-25 kg and stored in them. This allows the product to breathe and, when selecting for use, does not violate the established microclimate, does not turn the neighboring roots over. With this method of storing waste, there is no such thing. At the same time, the layer of potatoes should not be more than 1.5 meters..

The question of how to store potatoes will become important. For long-term storage, only late and medium varieties are used. Early potatoes are consumed first, as their dormant period is pumped in February and they will sprout irresistibly. The cellar should have several compartments. Seed material is stored separately. It is also advisable not to mix the varieties. Therefore, grid storage for a summer resident who seeks to obtain and preserve several varieties is optimal.

Violation of the thermal regime can lead to such troubles:

Potatoes can become flabby if kept warm. At the same time, moisture evaporates from the potato and biological processes in the tuber are accelerated. If potatoes are stored even in diffused light, they will turn green and become poisonous. Dark spots can appear when potatoes are stored below normal temperature, even half a degree for a long time. But at the same time, dark spots do not appear immediately, but after several days of being warm. The tuber becomes unpleasant after storage near the freezing point of water, closer to zero degrees. Such potatoes are not suitable for food, but they will sprout and this will not damage the harvest. In this way, early seed is preserved..

To suspend the awakening of potatoes in March, storage conditions are briefly created for them with a temperature drop of 1 degree. A few days of cooling will not affect the taste of the tubers, since the starch does not have time to turn into sugar. Germination slows down by two weeks, and this is significant in spring. In the future, the ventilation holes help to maintain the desired temperature in the basement until the new harvest, and the shelf life of potatoes is significantly extended..

Stable humidity and temperature are required for the preservation of tubers..

Other ways to store potatoes 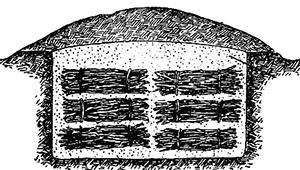 Storage in pits is possible in mild climates. At the same time, a deep hole is arranged, a visa for ventilation lined with straw and vertically installed sheaves. Potatoes are covered with a layer of 1 meter, burlap is laid on top, a layer of dry sand on top and leveled with dry earth. Before the onset of stable frosts, the pit from above is additionally insulated. Shelter is dismantled only in spring. 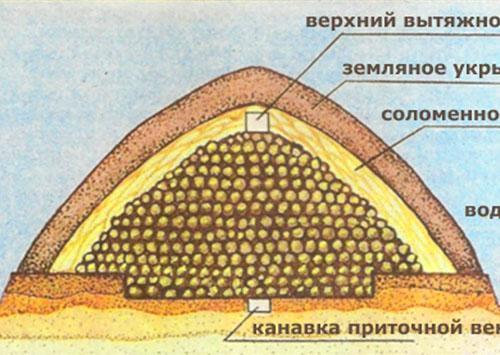 Outdoor storage in piles is used in the western regions. This storage method is based on long-term observation of the condition of the ground under the snow cover. The tubers laid in the trench have an underlying layer to absorb moisture and an upper insulating layer. The best material for insulation is straw, which optimizes and warms humidity. In addition, the shoulder is ventilated with specially laid pipes. With frosts, the shelter layer is adjusted depending on the temperature inside the potato mass. Snow is a good insulation. Above ground storage requires constant temperature control. The shelf life of potatoes in a pile depends on the establishment of warm weather in spring.. 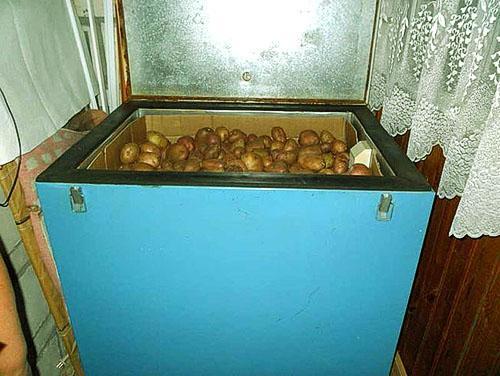 Thermostats boxes are made and sold for storing potatoes on the balcony in winter conditions. The principle of such a storage is based on the manufacture of a circuit with multilayer thermal insulation. Additionally, it is necessary to provide heating. The heat source can be ordinary incandescent lamps, but the light from them should not fall on the potatoes. Storage in a drawer installed in the kitchen also presupposes thermal insulation of the space, but it will require a supply of cold air for ventilation. Such systems, created by craftsmen, also work in automatic mode. In the old Khrushchev houses, a special box with an opening for ventilation with outside air was built in the kitchen. Most often, up to 200 kg of potatoes and a forced ventilation system are placed in such a container..

The use of any method must ensure storage conditions for potatoes with a constant nutritional value of the product..