Tips on how to get rid of aphids on dill 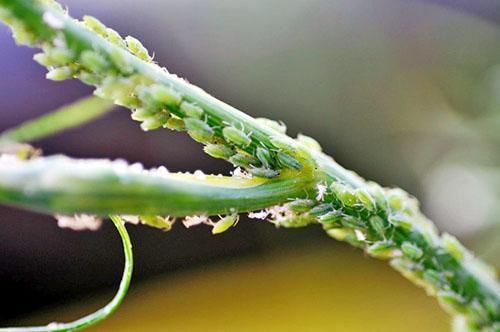 Several species of aphids parasitize on dill at once, giving from 12 to 18 generations per season and causing serious harm to green culture. Ants using and settling these insects feed on sweet honeydew secreted by aphids. Its traces on the plant are one of the first signs of a threat to planting. In addition to sticky, sweet spots, a sure sign of the presence of a pest is whitish, ash-like scales. This is an old shell discarded by aphids.

If there is aphid on dill, what should the gardener do, and how to protect new beds from infection? First of all, pests take a liking to young shoots and foliage, accumulate on the back side at the base of the leaf plate and on the formed dill umbrellas. In these places, where the surface layer is thinnest, aphids pierce the plant tissue and feed on its juices..

Due to the rapid reproduction of aphids, dill quickly turns out to be literally stuck with insects. As a result, the greens do not develop, they are deformed, with aphids, in addition, infections dangerous for the plant can be transferred to the dill beds, for example, harmful fungi, whose colonies on the greens look like spots of oily soot. What to do if aphids on dill are a real danger to the crop?

If garden plants that do not have ready-to-harvest fruits, potatoes or ornamental crops can be safely treated with insecticides, then spraying greens with chemicals is quite dangerous. Therefore, in order not to fight aphids on dill, great attention is paid to prevention, adherence to agricultural techniques and crop rotation, as well as the use of biological products and folk remedies..

How to get rid of aphids on dill, so as not to lose the harvest, the greens have not lost their properties and remain safe for humans? 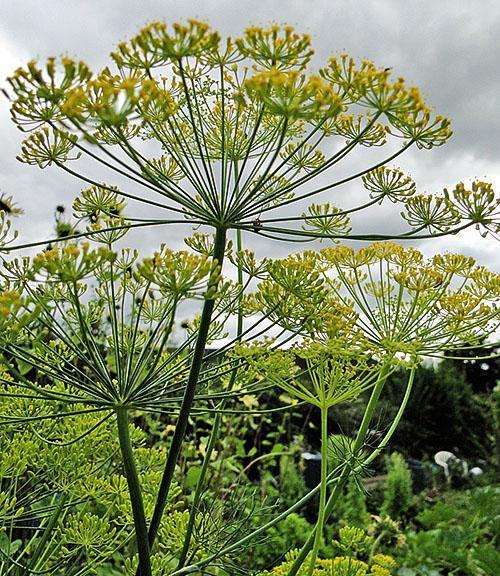 For sowing dill, ventilated, well-lit areas are chosen. Excessive seedling density should not be allowed, since aphids and other pests settle on elongated plants that do not receive nutrition and moisture in the first place. Aphid larvae hibernate on plant debris, weeds and already infected cultivated plants that leave before winter. In the spring, pests capture shoots that appear from under the ground and begin to actively multiply. What to do so that aphids on dill do not ruin the harvest of vitamin greens?

If you take care of the timely removal of weeds, dry stalks of dill and other umbrella infested with similar types of insects, then the risk of crop loss from aphids will dramatically decrease.

Equally beneficial is a careful examination of the plants, especially the back of the foliage and sinuses, where aphids accumulate most often. Single pests detected and manually removed in time will not be able to create a large population, and the plants will be saved. 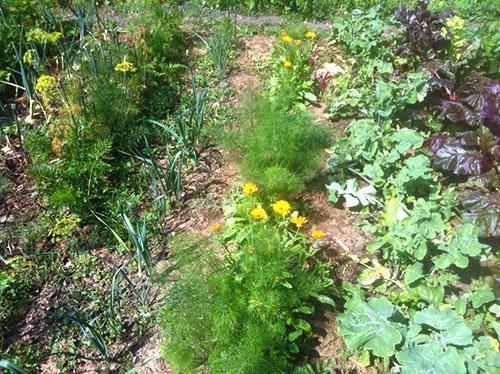 We must not forget about the rules of crop rotation. You should not sow dill in areas where carrots, celery and parsley were previously grown, as well as similar species affected by the same types of pests. And it is better not to plant such plants in neighboring beds. To protect dill from aphids and other insect pests, it is useful to alternate beds with this crop with garlic and onions. Many herbs, such as coriander, basil, mint and fennel, have aphid repellant effect..

Competently used ornamental plants will also help. Phytoncides of marigolds, Dalmatian and pharmaceutical chamomile have a depressing effect on the pest. Kosmeya planted next to dill beds, like lavatera, mallow and tuberous begonia, as well as a number of legumes, distracts aphids from dill. 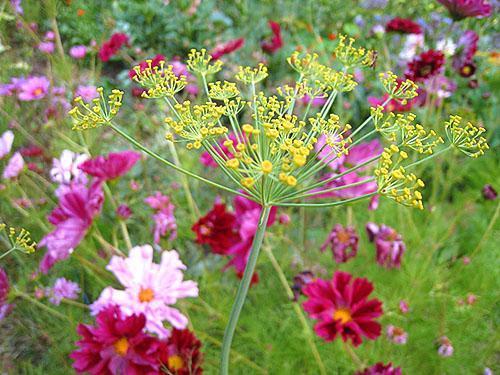 But sowing this greens near viburnum bushes, linden trees and bird cherry trees is not worth it. These plants primarily attract a dangerous pest and can become a source of infection for nearby beds..

You can save dill from aphid attack with the help of a non-woven covering material of the lowest density. Such fabric transmits heat and light, is light enough not to harm plant growth, but does not allow insects to penetrate and fix on leaves and shoots. How to treat aphids on dill in order to get rid of insects as safely and quickly as possible?

If aphids nevertheless appear on dill, insects are washed off the greenery with a powerful jet of water, and heavily affected plant parts are cut off and destroyed.

Since garden ants are engaged in the settlement of aphids, the accumulation of these insects on garden plantations cannot be ignored. In the fight against ants, specialized insecticides will help, the treatment with which must be carried out away from crops of green crops.

How to handle aphids on dill? 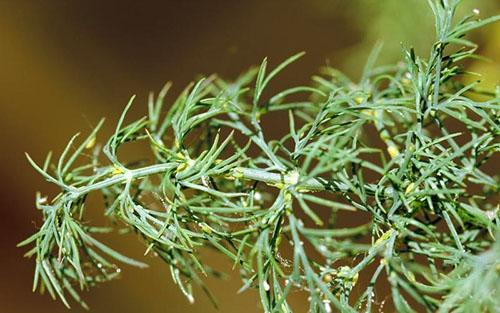 Today, gardeners and gardeners are offered a variety of highly effective insect control products that also work against aphids. But is it possible to eat dill if the aphid, and with it the greens, are treated with such preparations? Obviously, this is very dangerous due to the risk of chemicals getting on the person’s table. How to get rid of aphids from dill and not be afraid that the greens will become toxic? The safest are biological products that do not harm humans and other warm-blooded organisms, but effectively destroy not only aphids, but also many common pests.

After spraying dill with phytoverm, the bulk of the aphid dies after 2 – 3 days. At the same time, the maximum effect lasts up to seven days, and in dry weather fitoverm can fight aphids on greenery for up to 3 weeks. How else to treat aphids on dill? Similarly, but for 5 days, enterobacterin accumulates and exhibits its effect, which has proven itself well at elevated air temperatures in the range of 28–30 ° C. In the list of such drugs, it is worth paying attention to biotlin.. 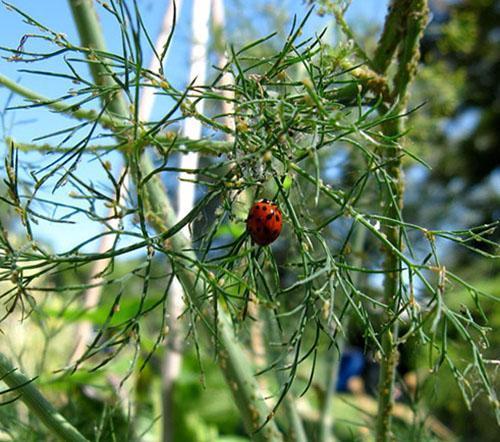 Foliar dressing from a solution of superphosphate and potassium chloride in a ratio of 2: 1 can increase the defenses of dill. 30 grams of the fertilizer mixture is dissolved in 10 liters of water and sprayed with dill, not bypassing the lower parts of the leaves and the root zone. After a week, the treatment is repeated..

In the case of using modern means of combating aphids, you can harvest and use greens for food 5-6 days after spraying.

How to deal with aphids on dill with folk remedies 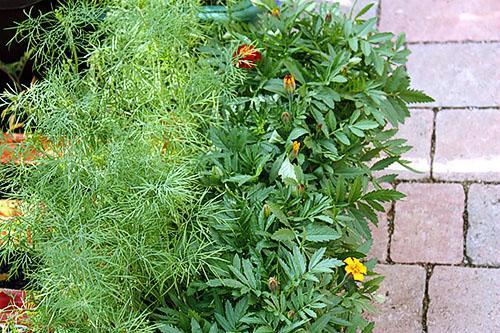 Aphids die after spraying greens with soapy water, which requires 10 liters of water and 100 grams of liquid soap or detergent. If these compounds are not at hand, 300 grams of grated laundry soap will do. For greater efficiency, 150–250 grams of wood ash can be added to the hot soapy solution. After cooling, the plants are sprayed with the agent, and if it is necessary to use dill for food, it is enough to rinse the bundles in warm water.

Not only chemicals have a deterrent and depressing effect on aphids, but also many plants that can be found right there in the beds and flower beds..

In country conditions, when aphids are already on dill, you can use good help – rich infusions from:

To prepare the infusion, you can use makhorka and mustard powder. It is good when such funds are used in combination with soapy water and agricultural techniques..

How to deal with aphids – video