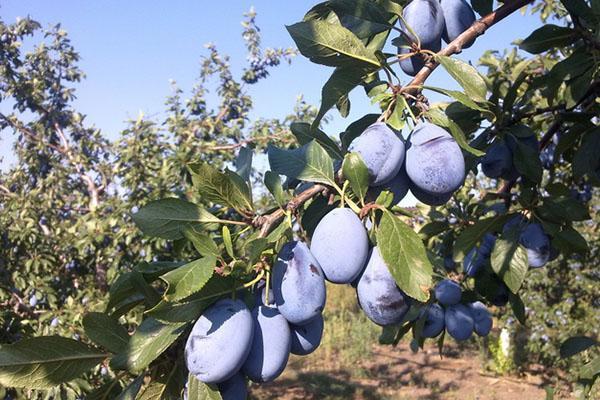 A remarkable group of varieties under the general name – Hungarian plum is well known in Russia. Breeders have worked hard to create regionalized varieties adapted to the climates of different regions. But choosing a seedling is only half the battle, it still needs to be properly planted and taken care of.. 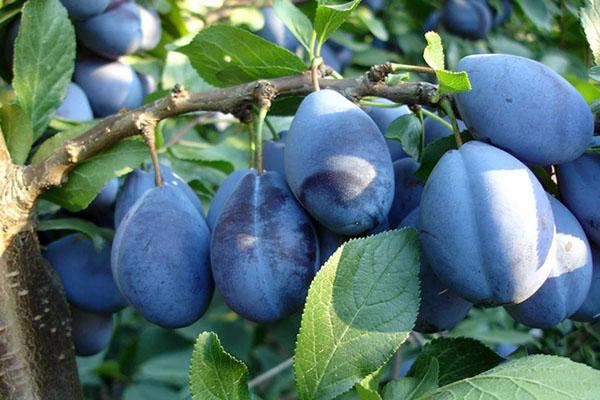 The fruits of various varieties of the group have similar characteristics – a pleasant sweet and sour taste, honey-colored flesh, blue or purple skin, oblong or oval shape. The calorie content of Hungarian plum is low – only 42 kcal per 100 g. But the prunes, which are made from it, are highly nutritious, they are about 5 times more nutritious than fresh fruits..

The differences lie in the mass of fruits, the timing of fruiting, frost resistance and drought resistance. For the most part, these are deciduous trees from 2 to 6 m in height. Many varieties bear fruit if several varieties from the same group grow on the site, which can be cross-pollinated. But there are also self-fertile varieties that give stable annual yields..

When choosing a variety, it is necessary to pay attention to the size and taste of the fruit, yield, winter hardiness, and disease resistance. It is better to purchase a zoned seedling intended for cultivation in the planting region. 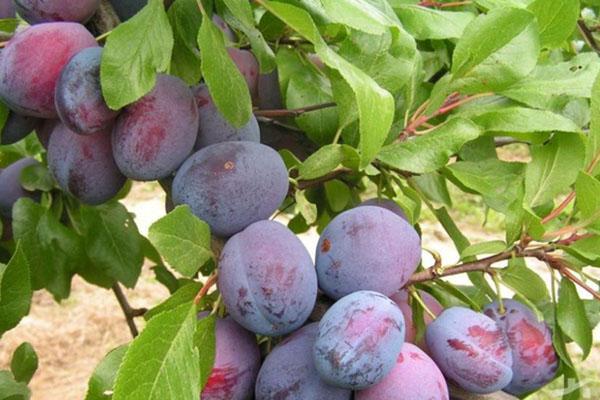 Variety for the Central region, was obtained from free pollination of “Home Hungarian”. The fruits are relatively small, weighing up to 20 g. They have a dark purple-red rough skin with a waxy coating. Dense, juicy pulp, sweet and sour taste.

The advantage of the variety is high annual yields, early maturity and high self-fertility. Average resistance to frost and disease. 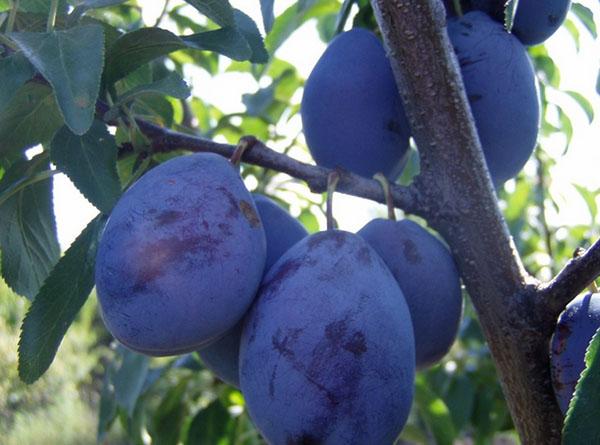 The variety was obtained at the Nizhnevolzhsky Research Institute of Agriculture, and entered into the State Register in 2002. Oval purple-brown fruits weighing up to 35 g ripen from mid-August to early September. The skin of the fruit is covered with a dense waxy coating, the pulp is very juicy and sweet, with a dessert taste.

The first crops can be harvested in 3 years of cultivation. The advantage of the variety is self-fertility, resistance to frost and drought..

It is better to buy a seedling grafted on an apricot or wild plum, such a tree will bear fruit for at least 20 years. 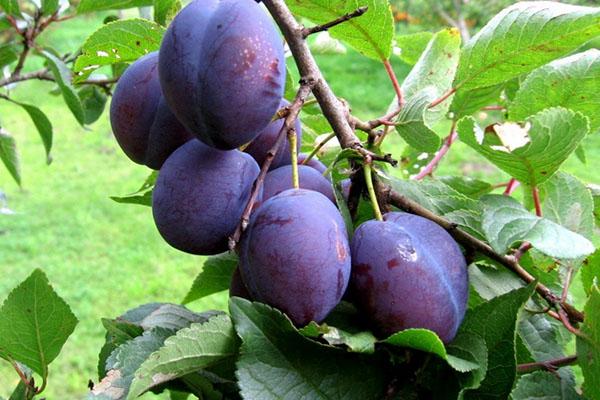 The variety is intended for cultivation in the southern regions. Obtained from “Skorospelka red” and “Renklode green”.

Large drop-shaped fruits weighing up to 35 g ripen in the first decade of September. They are distinguished by excellent taste and strong, pleasant aroma, suitable for canning and drying..

The variety is self-fertile, with medium frost resistance and long vegetation. 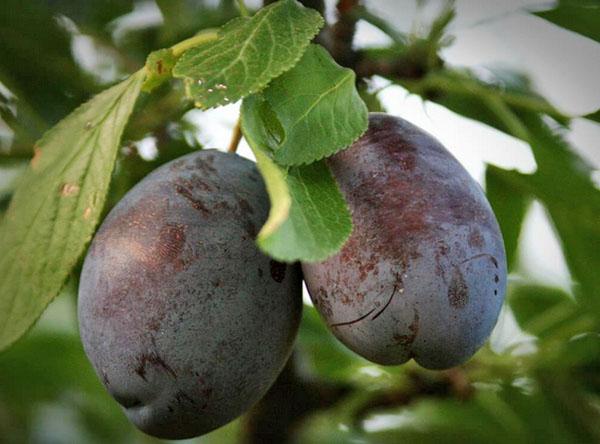 The variety is frost-resistant, partially self-fertile, blooms in April. Large purple fruits weighing up to 49 grams ripen in September.

The jam from them turns out to be mediocre, it is better to eat it fresh or cook prunes. Plum produces good yields when properly cared for. The tree begins to bear fruit at 4 years.

Treatments for moniliosis are required, since there is no resistance to this disease. 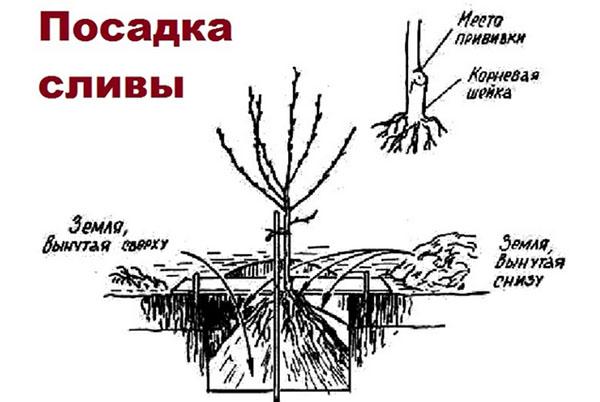 The best time to plant a young Hungarian plum is spring, when the soil warms up a little, the buds will swell, but have not yet opened. Planting in September is risky – the seedling may not have time to take root, and will die. 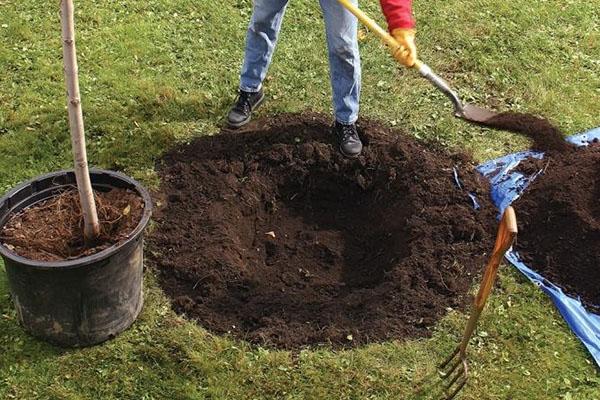 The success of plum cultivation is determined by the variety and the right planting site. A warm place protected from cold winds is selected for a seedling.

The groundwater level at the site should be quite deep, more than 2 m from the soil surface.

A plum pit is prepared 80 cm in diameter and 60 cm in depth. It is desirable that the soils are not heavy clayey, but light loams. The reaction of the soil environment should be close to neutral. Dolomite flour or chalk must be added to acidic soil during planting. At the bottom of the pit, add soil taken from the upper, fertile layer, rotted compost or humus, mix everything.

There are recommendations to add phosphorus-potassium fertilizers during planting in the amount of 300-400 g per pit. But not knowing the exact chemical composition of the soil, it is better not to do this. The organic fertilizer added during planting will be sufficient to support the development of the seedling in the next 3-5 years. Correct planting and caring for the Hungarian plum is a guarantee of 100% survival rate of the seedling and good yields in the future..

Description of the planting process

In the center of a hole filled with a fertile substrate, a depression is made, the size corresponding to the volume of the root system of the plum. It is advisable to water the seedling in the container the day before, so that the earthen lump does not collapse when removed..

Prune the tree immediately after planting to stimulate the growth of the side branches. A grafted seedling produces wild growth that needs to be removed annually. 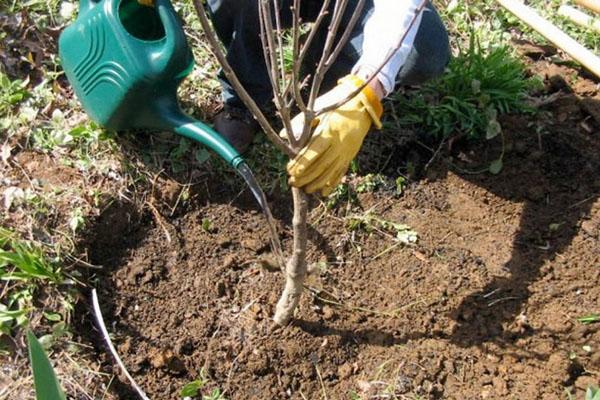 Young plums need to be watered regularly. If the trunk circle is closed when planting mulch, the next watering will only be needed after 2 weeks. Then, weekly, at least 2 buckets of water are poured under each tree.. 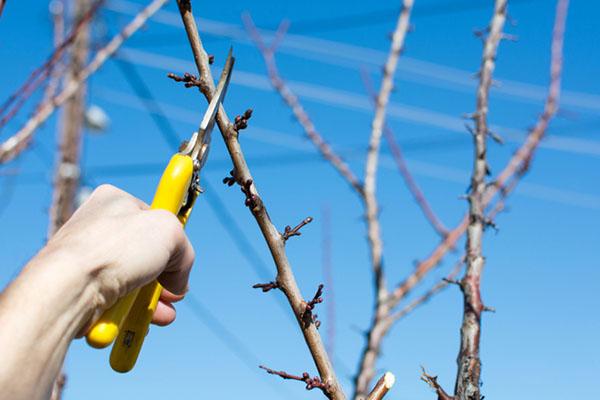 In addition to watering, fertilizing is needed, forming and sanitary pruning, protection from pests and diseases. You can use any insecticides and fungicides as long as there are no ovaries on the drain. It is advisable to carry out processing in early spring, before blooming flowers and in late autumn, after leaf fall.

If the fruits begin to crumble from a lack of nutrients, the tree must be fed with nitrophos (1 tablespoon per 10 liters of water). An adult Hungarian plum consumes 5-6 buckets of water.

Plums are not considered a very winter-hardy crop. One of the main problems is winter damage in the form of sunburn, frostbites. The easiest way to protect yourself is to whitewash trunks and skeletal branches in autumn. This will protect the plants from frost cracks (longitudinal cracks) that appear in March. When the crop is ripe, it can be damaged by birds. The most effective protection is covering the trees with a net..