Why does gooseberry not bear fruit? 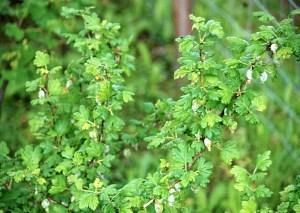 In terms of its popularity in summer cottages and backyards, gooseberries, like its closest relative, currants, are second only to strawberries. It is well stored, transported and gives a rich harvest of berries, unique in their usefulness and taste. Yet sometimes hopes are not justified, and gooseberries do not bear fruit, but there are always reasons for that.. 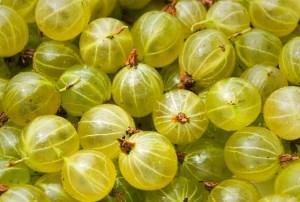 Gooseberries begin to bear fruit in full force in the 4-5th year after planting. And as long as the shrub is able to form new shoots, it will give a decent harvest. But if you do not remove numerous branches by pruning, this will lead to a thickening of the crown and a drop in yield..

An adult bush should represent from 14 to 20 strong shoots of various ages. Every year 4-5 young branches are left on the plant..

After 4 years, the four-year-old shoots that bear fruit are removed and replaced with new ones. This procedure is mandatory from year to year, otherwise the bush will quickly grow old, and then you will not see an abundance of berries..

So, the first reason for the poor yield of gooseberries is the lack of timely pruning..

Other reasons can be added: 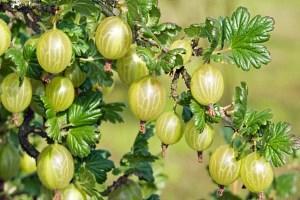 Gooseberries are very picky about light. Due to insufficient illumination with dense planting of bushes or due to being in the shade of trees, much less berries are tied on gooseberries, they are smaller and do not have the proper taste. If the area is too dark, the plant stops blooming altogether. In addition, with a similar location, the risk of fungal diseases increases..

Varieties with spreading bushes, such as Belarusian Sugar, are planted so that the distance between them is at least 1.2 m.Compact varieties can be planted at a distance of 0.9 m from each other.

Gooseberries do not like swampy soils, when choosing a site for planting, make sure that the groundwater is at a depth of at least 1.5 meters from the surface. Otherwise, diseases, and more often, the death of the plant, cannot be avoided. However, it needs constant watering. In the root zone, it is necessary to maintain a fairly high soil moisture (80%), therefore, gooseberries must be watered intensively until the moment when the berries begin to soften. After that, for the accumulation of sugar in them, watering is stopped. Recently, many gardeners prefer drip irrigation, it allows you to increase the yield and weight of berries by about 25%, while the water consumption is much lower compared to other methods..

About the benefits of feeding and diseases

If, when planting gooseberries, you applied mineral fertilizers or humus to the hole, then in the first year you should not worry about feeding. In subsequent years, starting from the second, in order for the gooseberry to bear fruit, the plant must be regularly fed. Before flowering, in spring, gooseberries require nitrogen. To do this, you can embed 100-150 g of urea in the ground under a bush or water the plant with its solution, the same amount of urea solution per 10 liters of water. A good result can be achieved by feeding with liquid organic fertilizers (chicken droppings, mullein). When buds are formed, feeding with phosphorus is appropriate. Most often, superphosphate is used for these purposes, previously infused in water for at least a day.. 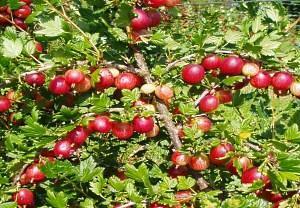 Eradicating spraying with copper sulfate, aimed at combating diseases and pests, is produced in early spring or late autumn, after foliage has fallen. Please note that in no case should this be done if the buds begin to bloom. Insecticides can also be used to combat pests: Decis, Arrivo, Mospilan.

If you are faced with the problem of why gooseberries do not bear fruit, first of all think about whether it is comfortable for it on your site, whether it has enough sun and moisture, whether it is overwhelmed by pests. With proper care, regular pruning and feeding, this issue is unlikely to bother you..

How to grow a large gooseberry – video