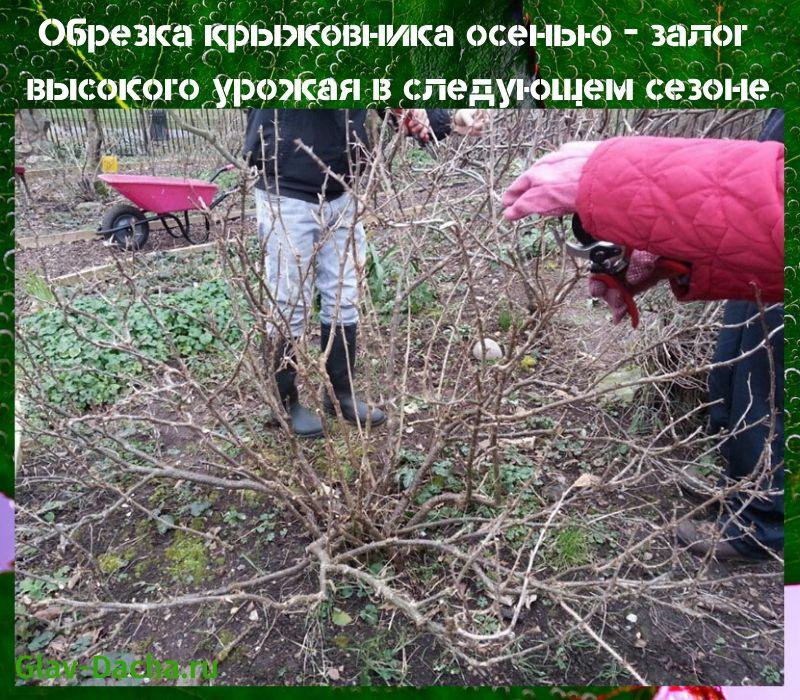 Delicious gooseberries with aromatic and sweet pulp are ideal for making delicious jam and more. Pruning gooseberries in the fall is one of the most important and necessary procedures in order to harvest bountiful harvests every year. This culture is distinguished by rapid growth, giving a huge number of young shoots per season. They thicken the bush, which leads to crushing of the berries and a decrease in yield in general. In addition, these plants start to get sick. An autumn haircut will help to avoid this situation. By planting just a couple of bushes and properly regulating fruiting by pruning, you will provide the whole family with vitamins. And also prevent premature aging of the plant and protect it from possible diseases.. 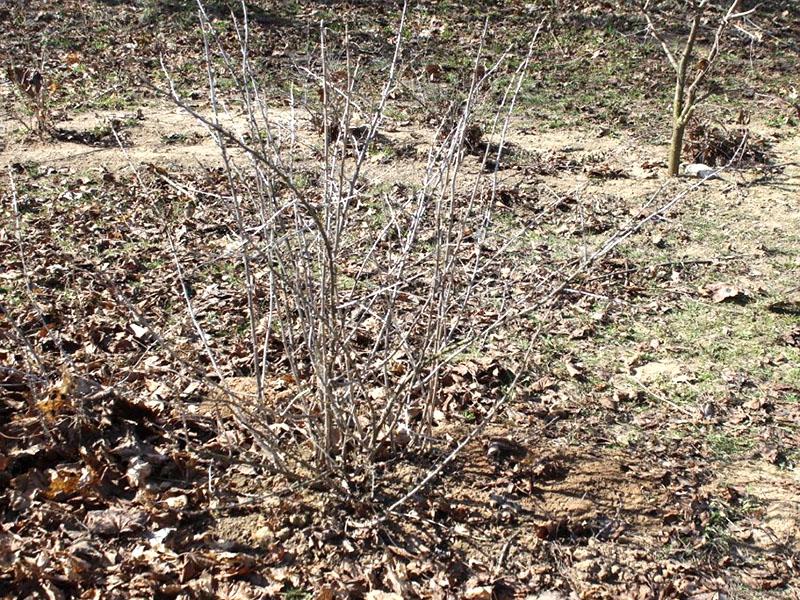 We are used to the fact that most of the procedures for caring for a garden or berry field occur in the spring. Indeed, when the plants wake up after the winter rest, all the problems and shortcomings are visible on the bare shoots. But with regard to pruning, it will still be better if you carry it out before winter, and not in spring. Undoubtedly, this will save you from spring hassles and free up a significant amount of time..

However, the fall haircut has other benefits as well. First of all, shrubs that have grown over the summer become a refuge for pests and various fungi. And there is no need for them to winter in a dense crown. And also randomly growing young shoots impede the access of light and air circulation. This weakens the gooseberry, which affects both the general “well-being” and future fruiting..

Pruning gooseberries in autumn will allow you to form a plant right now, without waiting for spring. Removing unnecessary branches will save him from having to feed too many shoots. Accordingly, the bush will enter the winter more robust, and in the next season will give a better harvest..

Pruning gooseberries in the fall – when you can do it 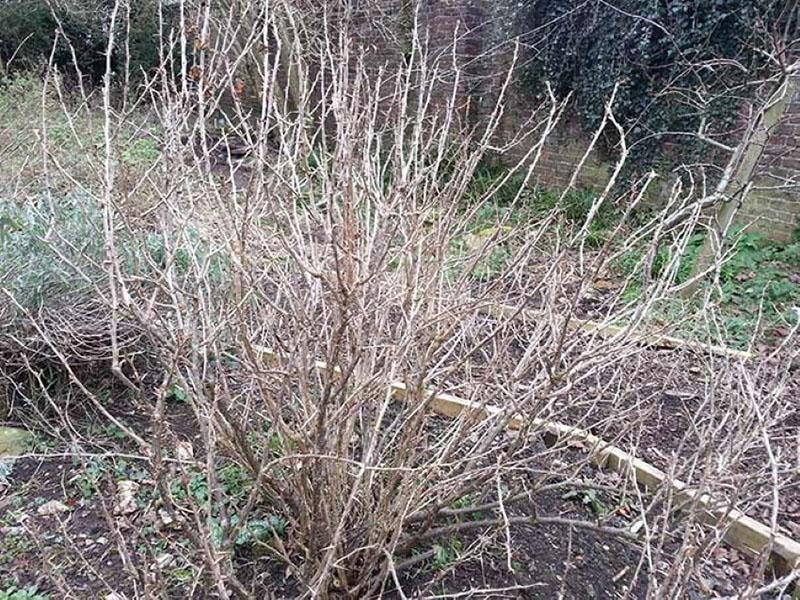 Do not rush to prune the thorny bushes immediately after picking the berries. Cutting too early will only give an impetus to the growth of young growth. Warm weather will contribute to this. Such shoots will weaken the plant, and they themselves will die in winter from frost, without having time to lignify. But pruning too late will not do the plant good. It will not have time to recover after such a painful procedure that it will affect the decrease in winter hardiness..

It is necessary to prune gooseberries towards the end of autumn, after they have dropped their foliage. But do not delay – before the arrival of frost, the plant should have a couple of weeks in stock for the cuts to tighten.

Tentatively, the autumn haircut falls on the month of October. Dates may vary depending on the region of cultivation (early October or November). 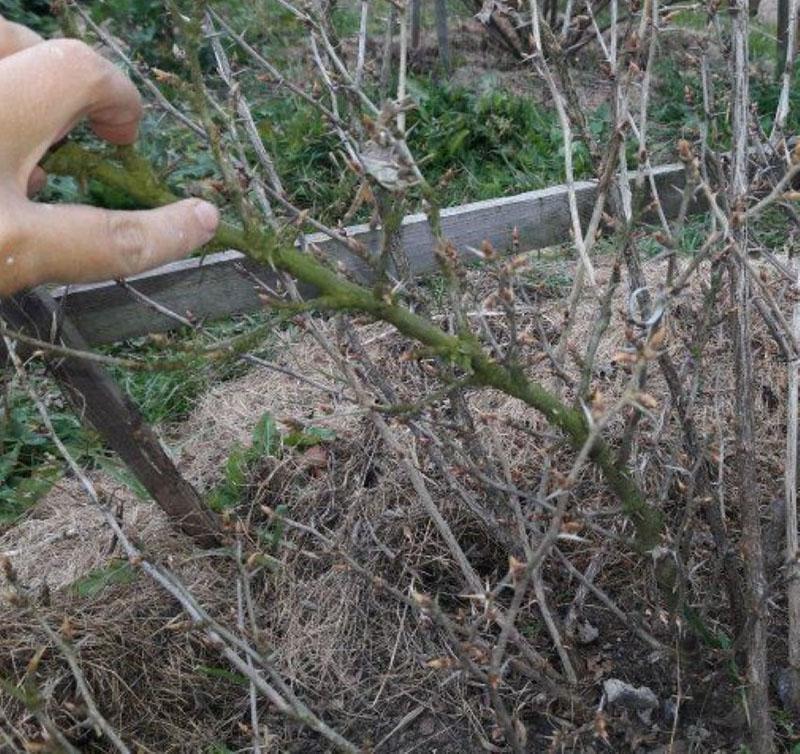 Depending on the goal, pruning can be:

Of all types, only sanitary pruning can be carried out regardless of the season, including in summer. If the bush is sick, get rid of damaged shoots immediately to prevent infection of the rest.. 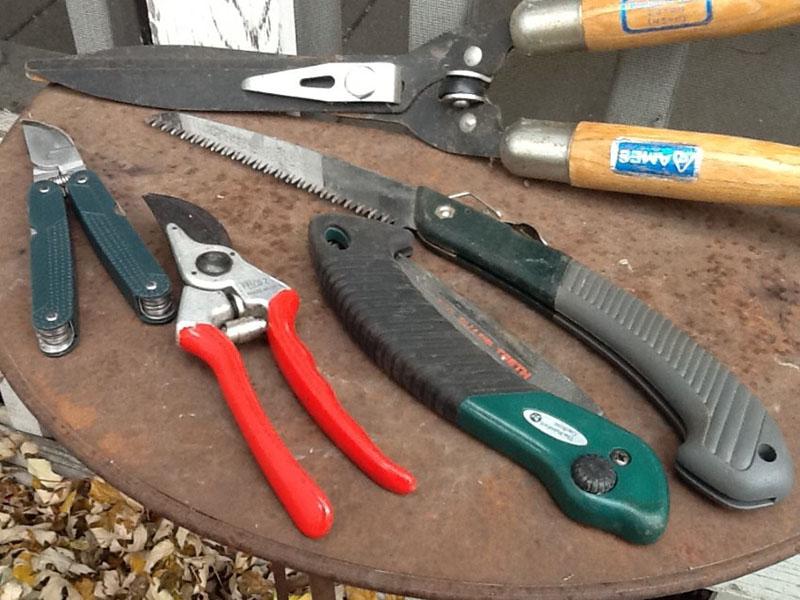 The gardener’s main assistant when pruning trees and shrubs is a good pruner. For gooseberries, it is also suitable only if you are still growing young plants. Their thin shoots and sparse crown are easy to handle and pruners.

But for pruning old, especially neglected, bushes, it is better to take a lopper. He will remove lignified strong branches without stress. In addition, it will reach them in the depths of the crown, which is important, given the huge number of sharp thorns. A special small saw with a handle will help to remove dry thick branches..

Make sure all tools are sharp, otherwise they will leave a laceration. Such a cut takes a long time to heal. Use a pruner or lopper after each bush. This is especially important if the gooseberry was sick. Using the same tool for a sick and healthy plant puts the latter at risk of being infected as well..

Pruning gooseberries in autumn – we form a young bush 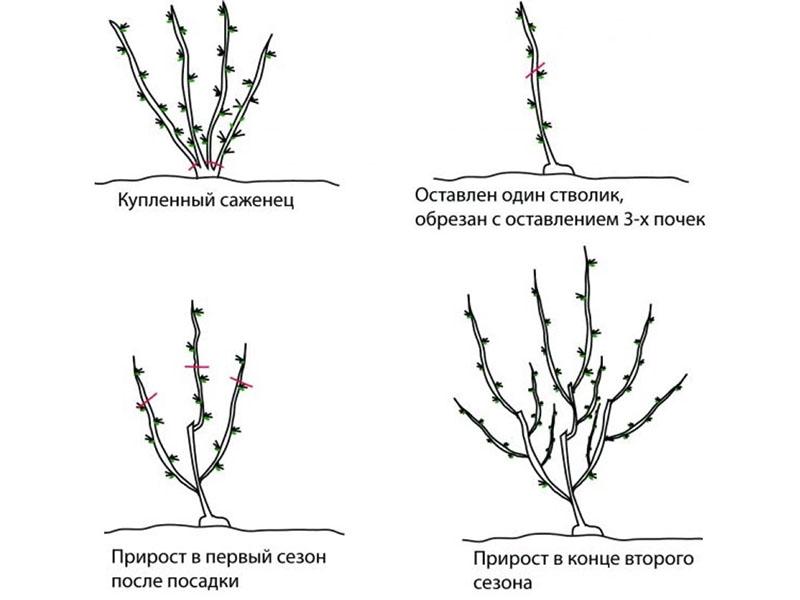 The thorny culture is extremely resilient. She not only grows young branches at a tremendous pace, but also grows quickly after shearing. This allows you to experiment and, if desired and necessary, change the natural form of the shrub. Moreover, it can be formed in a maximum of 5 years. Then you will only have to maintain and adjust the crown..

Having planted a gooseberry in the country, you can give it a shape and regulate it in one of three ways:

Regardless of which pruning method is used, cut it correctly. They should be located 1.5 cm above the bud, while only the one that is located outside the bush.

Then the side branches will also grow in the same direction. When cut over the bud, directed inward, and the twigs will grow into the crown, thickening it. 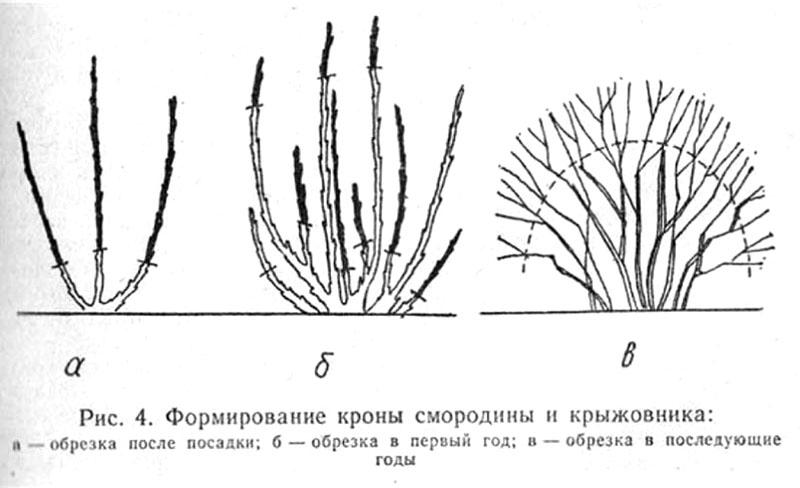 With this method, the bush retains its natural shape with a spreading crown. Your goal is to ensure that it is well lit and ventilated, and that the branches do not interfere with each other. According to gardeners, classic pruning allows you to take the richest harvest with large berries..

The classic shaping is suitable for beginner gardeners. Formation begins from the first year. In the year of planting, shorten the shoots of the seedling, leaving no more than 4 buds. If there are sick and dry, cut them out completely.

An adult gooseberry bush under the age of 10 years is enough to have up to 24 fruiting branches. Your next task is to maintain shape by brightening and sanitary pruning..

How to form a gooseberry on a stem 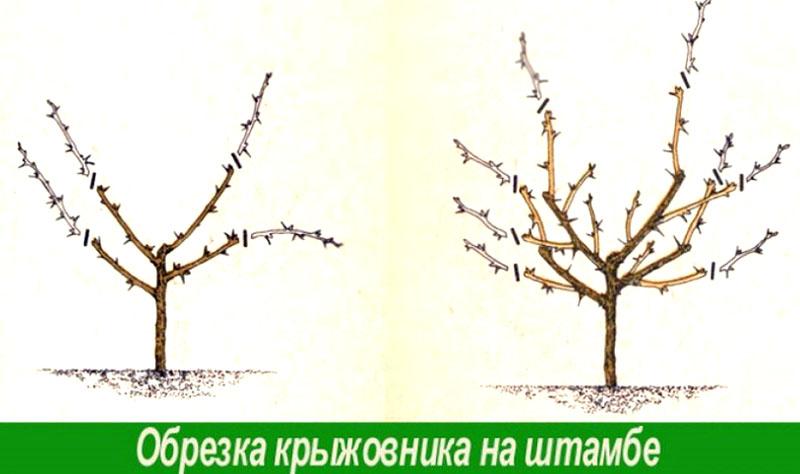 The advantage of a standard plant is that it takes up much less space. Such pruning is very popular when growing crops in areas of modest size..

Turning a gooseberry into a compact tree is not difficult, following these instructions step by step every year:

Gooseberries on a stem also yield a good harvest, but live less.

If a classically formed bush can grow for about 20 years, then a standard bush – no more than 12. In addition, it is weaker, more often sick and hibernates worse.

Growing gooseberries on a trellis – features of pruning 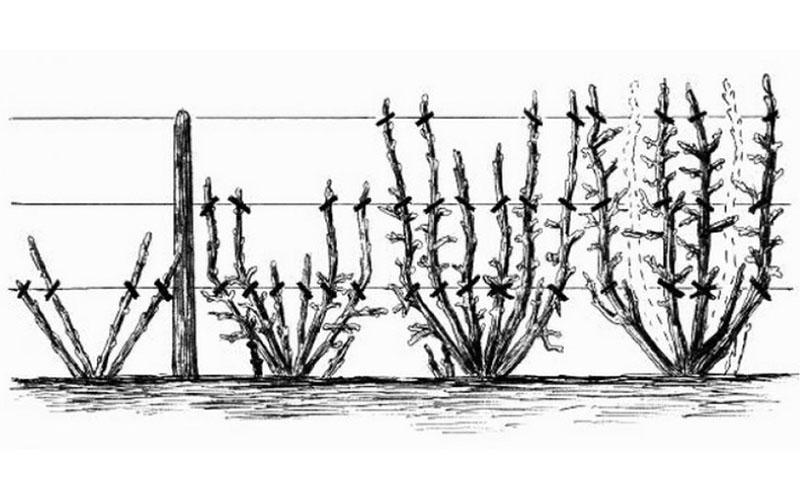 The trellis is a good solution both for you and for the bush itself. Harvesting is much easier, minimizing the “injury” from thorns, because the branches will be tied up. And the shoots themselves will receive more light and air, and will hurt less often..

To form a gooseberry on a trellis: 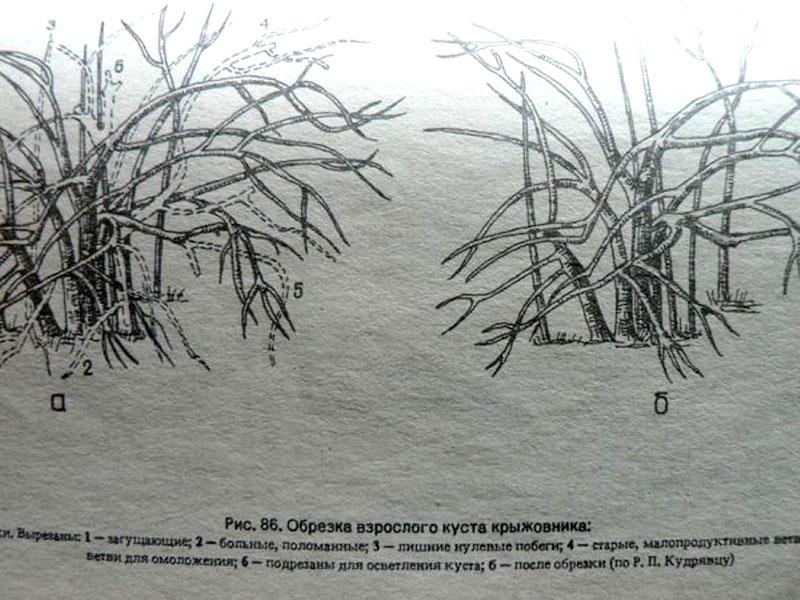 A sanitary haircut can be done both in the fall and in the spring. It is aimed at maintaining the given shape of the shrub, as well as removing the “dead” and diseased branches.

In order for the bush to develop normally, you need to completely cut out such shoots:

Do not get carried away with young growth – a few branches should remain to replace the old one.

Make sure that the lower shoots do not take root. The cuttings take nutrients from the mother plant, which reduces the yield. But if you need to breed a variety, this is a great opportunity. Then several lower shoots can be dug in so that they quickly build up their own root system..

Pruning gooseberries in fall for rejuvenation 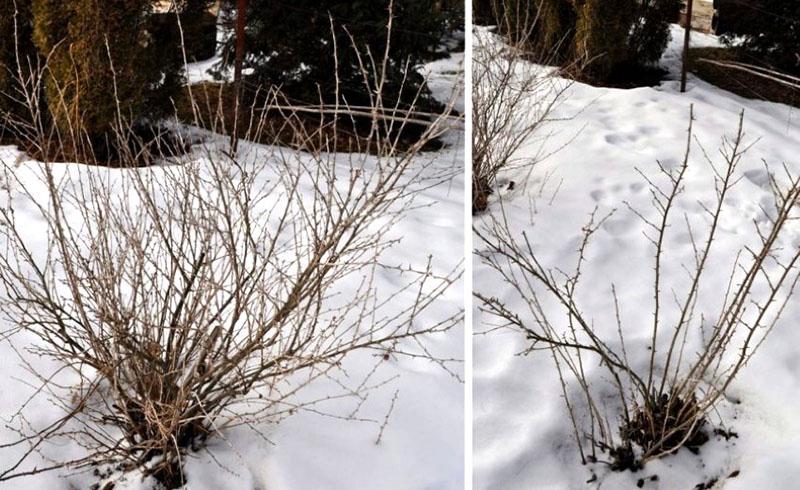 After 10 years, the bush becomes huge, which makes it difficult to harvest inside the crown. And its skeletal part is aging, and completely ceases to tie berries, or they become small and sour.

To preserve the variety and restore fruiting, anti-aging pruning is carried out in the fall:

Anti-aging pruning is carried out in several stages, over the course of 2-3 years. You cannot cut out all the old branches at a time, only no more than 1/3 of the crown, otherwise the bush will disappear.

Caring for gooseberries after pruning 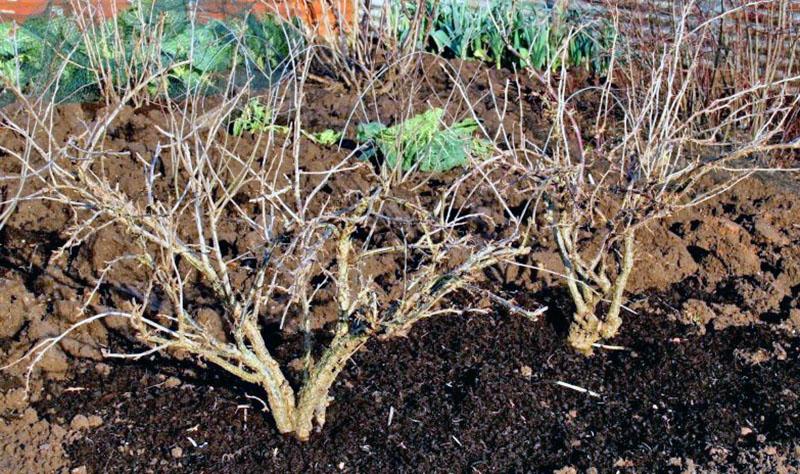 Regardless of what type of pruning was used, after this procedure, the bush is weakened and needs additional care. Be sure to treat all sections with garden pitch so that they do not become a place for the spread of the disease..

Instead of garden varnish, you can use a solution of urea and ordinary activated carbon. 1 tablet is enough for 70 ml of urea.

Further care for the pruned shrub consists of the following procedures:

If the gooseberry has been affected by a fungal disease, spray it with a fungicide after pruning diseased branches..

Such drugs as Coronet, Teldor, Antracop have proven themselves well. At the same time, treat the soil under the bush..

Thus, pruning gooseberries in the fall will help not only free up time for spring work. At the end of the season, it is important to carefully inspect all the berries. Over the summer, pests and fungi could appear in them. By promptly removing the affected parts, you will prevent the spread of diseases and insects. Also, direct the development of culture in the right direction. Rapid growth in this case gives gooseberries a lot of trouble. The shrub thickens quickly and it is difficult to get inside the crown to pick berries. Timely thinning will facilitate harvesting and keep crop performance at a high level.