What do the yellow and white streaks in the flesh of a watermelon mean? 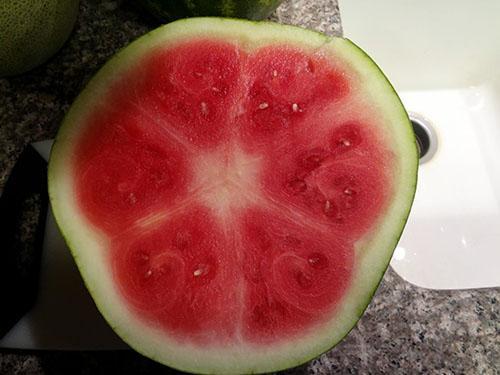 Knowing the popular love for watermelons, every year there are people who are sure to try to make money on this, using dishonest or completely illegal methods. Most of these techniques are aimed at obtaining the earliest and most plentiful harvest. As a result, traders and agricultural producers benefit twice as:

The only one who loses is an unfortunate consumer who succumbed to temptation and bought a completely useless, far from always tasty, and sometimes very dangerous watermelon. Indeed, in pursuit of profit, unscrupulous melon growers, and then merchants, have to violate agricultural practices, fill the planting with chemicals, use seeds of dubious quality, and also, not observing the terms and conditions of storage of fruits, offer deliberately spoiled watermelons. 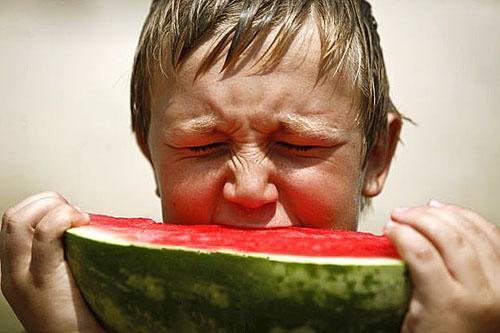 The problem is complicated by the fact that when buying a whole fruit, people cut it only by serving it, and only here they can see:

And sometimes the red sugar watermelon, instead of being sweet, tastes desperately bitter. Why is this happening? How to deal with such a watermelon and what do the white and yellow streaks in the pulp mean??

Where are the white and yellow streaks in the watermelon?

The main and most common cause of poisoning caused by watermelons is the use of excess nitrogen fertilizers in growing.. 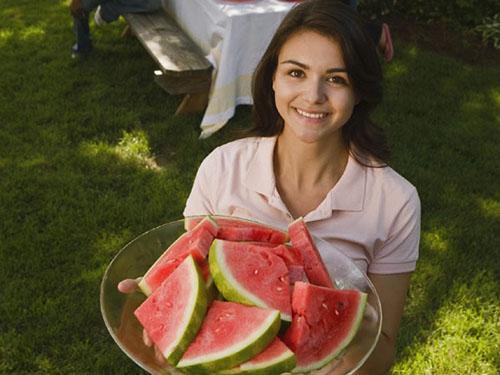 Under normal conditions, nitrogen is an indispensable element for the growth and development of plants, however, using it in excess of the permissible norms, melon growers can get a fruit weighing up to 10 kg in 2-3 weeks. After abundant watering and feeding with a solution of saltpeter, watermelons swell like yeast, and instead of the prescribed 70–90 days of staying on a melon under the sun, they are harvested almost a month earlier. The manufacturer receives an early harvest of huge fruits, but each of them has already managed to accumulate a hefty portion of nitrates, toxic to humans..

One of the signs of “poisoning” of melons with saltpeter are white and yellow streaks in the watermelon that pierce the flesh. They are formed due to the action of a chemical, forcing not only the whip to develop faster, but also the fetus. At first, these peculiar vessels are white and supply the still immature watermelon with food, but under the influence of nitrates, the fruit grows rapidly and just as quickly ages. Therefore, the white veins in the watermelon soon coarsen and acquire a yellow or brownish tint.. 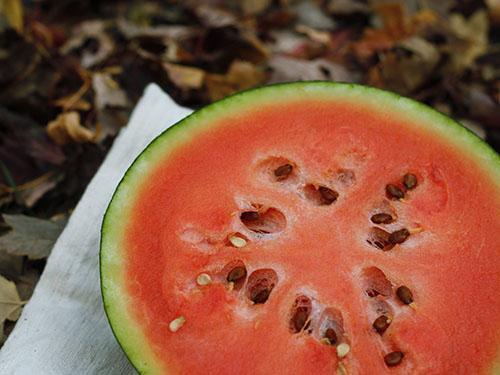 High doses of nitrates and nitrites synthesized from them in the body can accumulate and enhance the negative effect. Exposure to nitrogen compounds affects the digestive system, disrupts metabolic processes and has a depressing effect on the nervous system. As a result of the ingress of nitrites into the body, the supply of oxygen to the tissues worsens, the immune system is destroyed.

If an adult tolerates a dose of 150-200 mg relatively painlessly, then 600 mg of nitrates cause irreparable damage. But nitrogenous compounds cause the greatest damage to young children, for whom a dose of 10 mg or more is toxic.

Why does a watermelon have loose flesh inside? 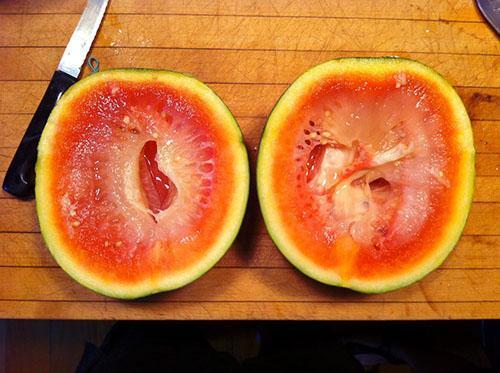 Interestingly, the nitrate-induced process continues after such a “chemical” crop has been harvested. True, the watermelon no longer grows, but the tissues inside it change. Even torn off green, it soon turns red, and the white vessels gradually turn yellow. And a couple of weeks after harvesting, the flesh inside the watermelon is loose, crumbling and slightly juicy..

When cutting a fruit pumped with nitrates, which has lain a little on the counter, in addition to yellow veins in the watermelon, areas of yellow compacted pulp are often found, reaching from 2 to 50 mm in diameter. The use of such a watermelon in healthy people can cause the most unpleasant consequences, and more precisely it will not bring pleasure. The use of nitrates is the most common reason for the poor quality of melons, but in reality, you can face some more unpleasant moments..

Asking the question: “Why is the watermelon inside loose and not tasty at all?”, The buyer may come across a fruit that has been stored incorrectly for a long time. A couple of weeks in the scorching sun is enough for a watermelon torn from the whip to begin to lose moisture, and its pulp takes on the appearance of dry reddish or whitish grains. As a rule, such a process starts from the location of the seeds, and then spreads to the core..

Why is watermelon bitter?

If the coarse fibers in the pulp, changes in its color and structure, indicating the poor quality of the watermelon, are easy to see as soon as it is cut, then the bitter fruit will definitely have to be tasted at least once.. 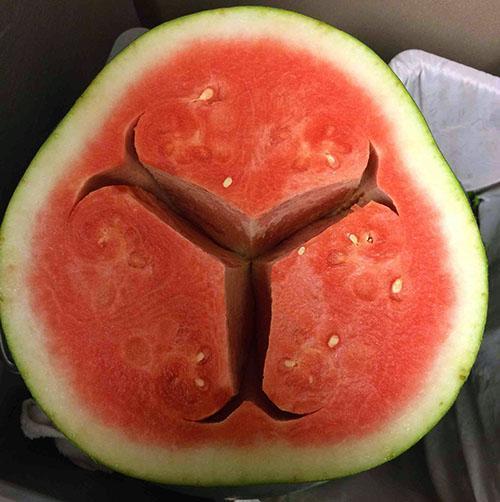 Why is the watermelon famous for its sweetness bitter? There are several possible answers here. Most often, buyers have to deal with already lying fruits, which, due to natural reasons or due to the effect of nitrates, have lost their original taste..

Thanks to the saltpeter in the ovary, it develops rapidly, reaching a weight of 10–20 kg. Then, unscrupulous melon growers leave the watermelons to rest for a few more days, during which the fruits turn red, but, alas, do not gain the proper sweetness. As a result, the accumulated 5–6% of fructose and glucose are converted into sucrose, and soon the pulp begins to sour, changing the taste to bitter sour. 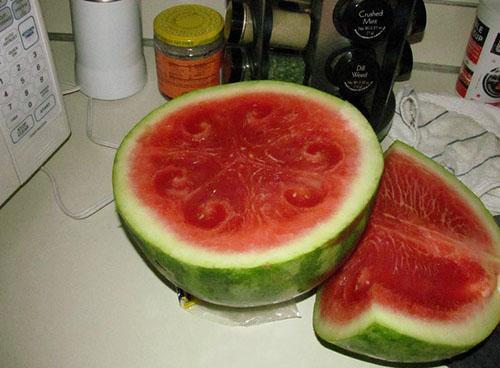 In addition, if an unripe fruit pumped with nitrates is bought, it is possible that cucurbitacin, the substance responsible for the bitterness of cucumbers and momordica, is to blame for its unpleasant taste. In ripe watermelons, it contains a small amount, but in greens, which causes stomach pain and indigestion, the natural toxin is much more. This explains why the watermelon tastes bitter in the summer..

If you wanted to feast on a sweet slice in winter, then ethylene gas can be the culprit for the unpleasant taste, which is used to process fruits grown somewhere in Thailand or Turkey for better storage..

In any case, if a watermelon that is loose inside, with coarse fibers or has a specific taste gets on the table, you should refuse to eat it.