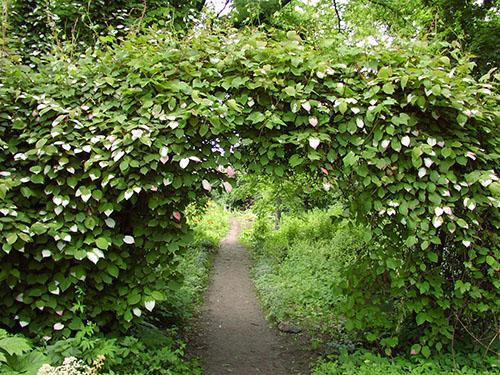 Actinidia is a popular plant of the subtropical zone, belongs to the genus of shrub vines. Actinidia kolomikta and its varieties for the Moscow region, photos of which are presented in the article, are known for delicious fruits. Many varieties are suitable even for the harsh Russian climate, and their characteristics will be outlined a little below.. 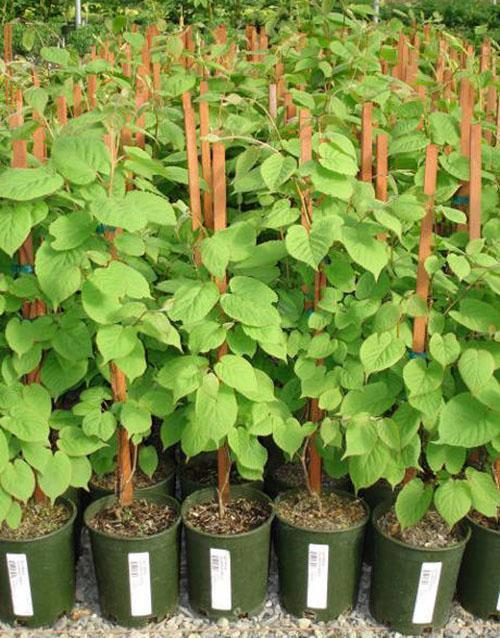 Thanks to the efforts of breeders, such an outlandish plant as actinidia kolomikta is successfully grown and bears fruit even in the regions of the Russian Federation. This species is frost-resistant, tolerant of the harsh conditions of our climatic zone and is quite unpretentious in care..

Outwardly, actinidia kolomikta resembles a liana with weaving branches and large heart-shaped leaves. The color scheme of the foliage is inconsistent and changes depending on the season. The flowering of actinidia begins in mid-May and can last for several weeks, the flowers are irregular in shape, have a pleasant fragrant aroma. The plant bears fruit since August, but often this phase is delayed until October.

The fruits of actinidia contain a whole range of vitamins and nutrients:

As preparations for the winter, many housewives grind fruits with sugar or dry them. However, when consumed, one should take into account the fact that the berries have a strong laxative effect, and dose their use..

Actinidia kolomikta belongs to dioecious plants, there are male and female types. When planting in a garden, it is necessary to place male and female plants side by side so that the crop yield is full. Propagated by cuttings, which are best planted in the ground in spring.

The best varieties of actinidia kolomikta for the Moscow region

The climatic conditions of the Moscow region are rather harsh. There are frosts in the spring-winter period and dry summer days. The optimal area for the cultivation of actinidia kolomikta is the southern regions, but with the help of the efforts of breeders, some varieties of tropical plants are suitable for growing in the Moscow region, the presented photos of each of them will help gardeners to determine belonging to a particular variety.

The most recommended varieties of actinidia kolomikta for growing in the Moscow region: 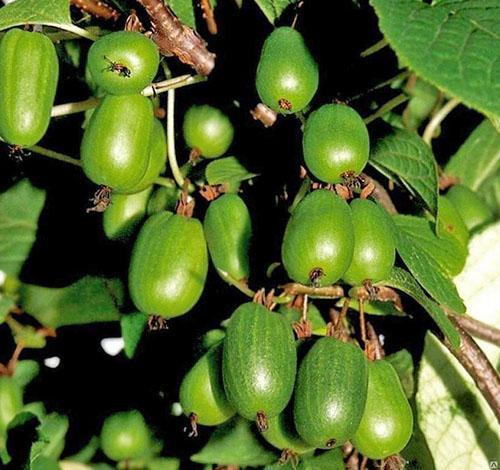 Actinidia kolomikta Dr. Shimanovsky is a type of plant with small oval-shaped berries that ripen in August. It is advisable to plant this variety in a sunny place, but not under direct scorching rays, the presence of a light shade is required. Berries have a well-defined aroma of apple and pineapple. 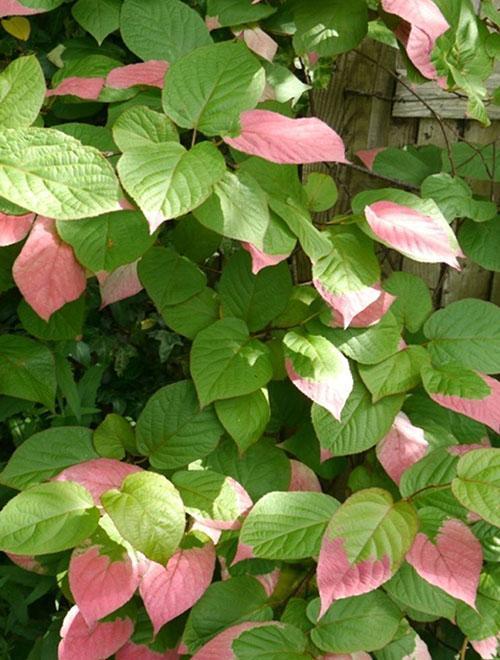 Actinidia kolomikta Adam is an ornamental variety with unusually colored foliage that blooms in green, turns white by the end of spring, and acquires a pink color by autumn, the color saturation is constantly increasing. This variety loves sunny, low wind places, perfect for decoration purposes when creating hedges, gazebos, arches, landscaping balconies and loggias. Adam is a male type of actinidia colomicta. During flowering, it becomes covered with small white inflorescences, exuding a pleasant aroma, similar to the scent of lemon. The variety grows very quickly, reaching a height of four meters.. 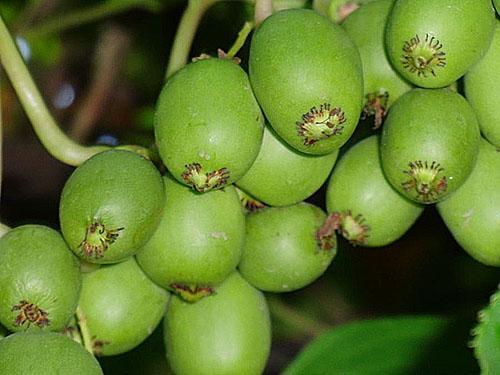 Actinidia Kolomikta September is a frost-resistant species that can withstand temperatures down to 40 C. It is characterized by high productivity, greenish-yellow fruits have a pleasant taste. For pollination, it is recommended to plant near actinidia of the Adam variety. The plant spreads along the ground or twines around trees, installed supports. 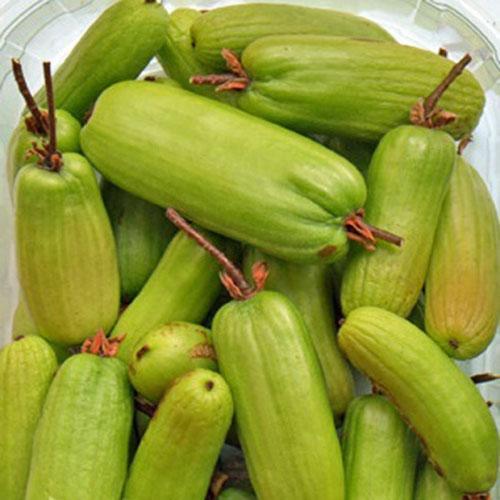 Actinidia Kolomikta Vitacola – the variety has large oblong fruits, collected in bunches of two or three berries. Vitacola begins to ripen in stages by mid-August. Leaves have an inherent decorative color in white-green or pink tones. The plant begins to bear fruit in the third year after planting in open ground, belongs to the female type, grows to a height of three to four meters. 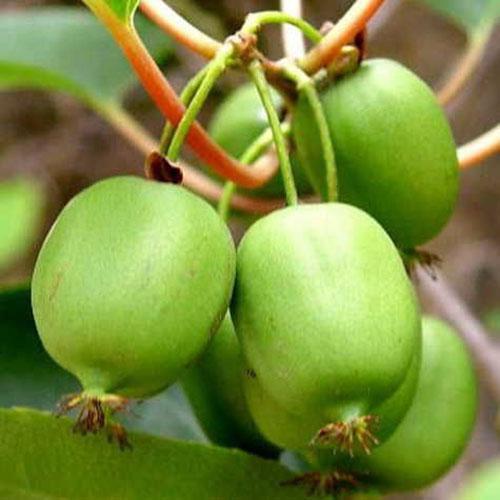 Actinidia kolomikta Lakomka is distinguished by the large size of the berries. Cylindrical fruits of bright green color with white stripes, with a rich pineapple aroma. Ripening time is in August-September.

Features of care for actinidia kolomikta 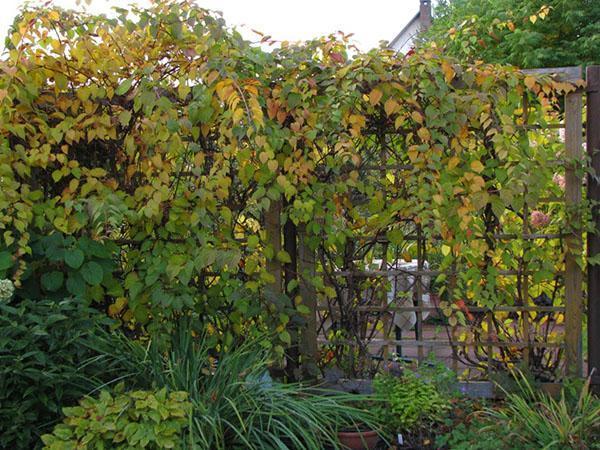 A distinctive feature of the actinidia kolomikt is its frost resistance, but to ensure safe wintering, it is necessary to additionally cover the plant in late autumn. Given the culture’s love of branching, it should be provided with additional supports..

It is preferable to choose soil with an admixture of clay or sand so that it is loose and quickly moisturized. It is recommended to plant actinidia in early May; keep a distance of at least two meters between the plants. The upper layers of the soil should be enriched with humus or rotted organic fertilizers. For good fertility, the crop should be regularly fed with nitrogen-containing compounds..

It is necessary to organize watering of actinidia kolomikt by airborne droplets in the evening, on hot days it is imperative to additionally moisten the soil around the plant. Loosening is carried out often, followed by mulching the near-stem area.

Actinidia rhizomes are well developed and located shallow underground. This fact should be taken into account when loosening the soil, so as not to damage the roots..

Considering all the above recommendations, each gardener can grow actinidia kolomikta on his site by choosing one of the recommended varieties for the Moscow region from the photo.