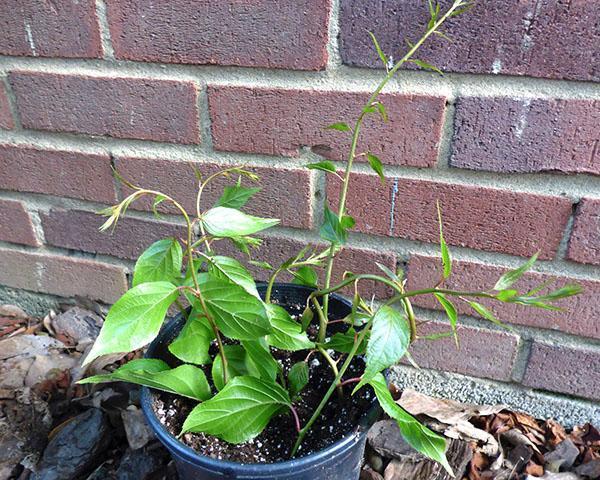 In the climatic conditions of Russia, Belarus and Ukraine, not many large lianas can grow comfortably and even more so bear fruit. An example of an unpretentious winter-hardy culture is actinidia, planting and caring for which, with the correct selection of the variety, give consistently positive results.

Among the advantages of actinidia is not only the ability to endure cold weather and grow for a long time without transplanting, perfectly landscaping your corner of the site, but also to actively bear tasty and healthy fruits. With the advent of hardy varieties of domestic breeding, obtaining stable yields has become possible in the central regions of the country, and in the Northwest, and when growing actinidia in Siberia..

The culture has many advantages, the number of fans is also increasing, but before choosing a place for the future “inhabitant” of the garden, you need to learn something about the nature of the plant and about the features of its planting. 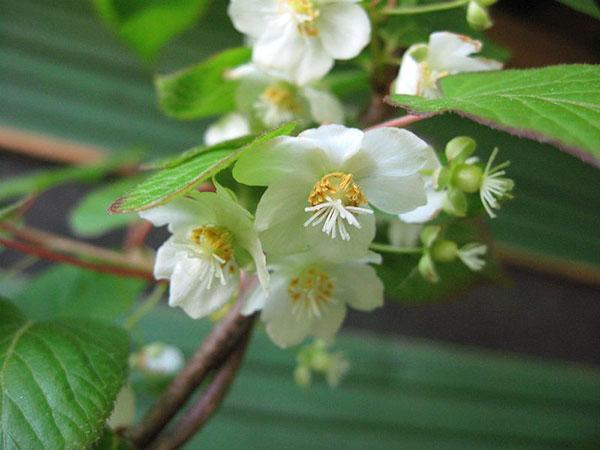 Both botanists and experienced gardeners have been arguing for many years about the self-sterility of actinidia. One glance at flowering vines is enough to notice the “sex” of a particular specimen. Pollination of female flowers requires pollen, which is carried from male specimens by insects or the wind. Therefore, to get a harvest, you need to plan to plant a couple or more seedlings at once..

You can hear that female actinidia plants bear fruit without foreign pollination, but this is rather an exception. To know exactly the “sex” of the seedling, you need to contact trusted nurseries or online stores for seedlings of actinidia.

Timing of planting anemones and care of seedlings 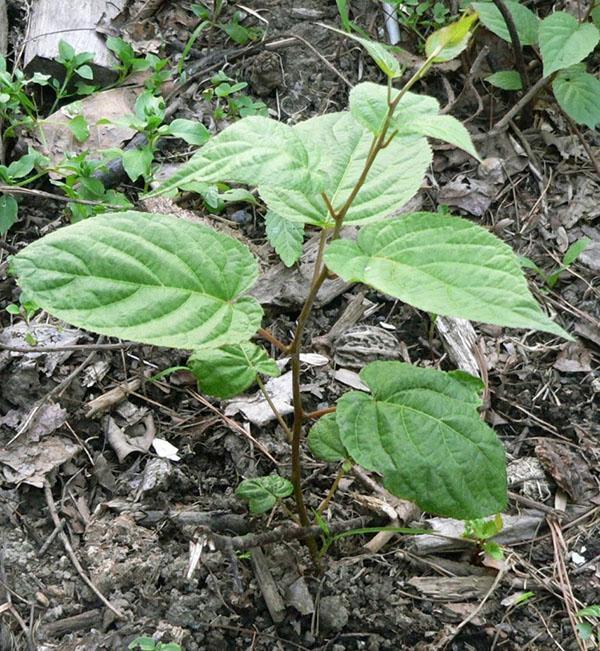 The traditional time for planting actinidia is spring. Since plants that are not afraid of winter cold, wake up and actively revive with the onset of warmth, they can suffer from insidious spring frosts almost everywhere in the middle zone and to the north. Therefore, it is important that the seedlings fall into the ground before the beginning of the growing season, that is, in April or a little later, when it comes to planting actinidia and caring for it in the Urals, east or in the northwestern regions.. 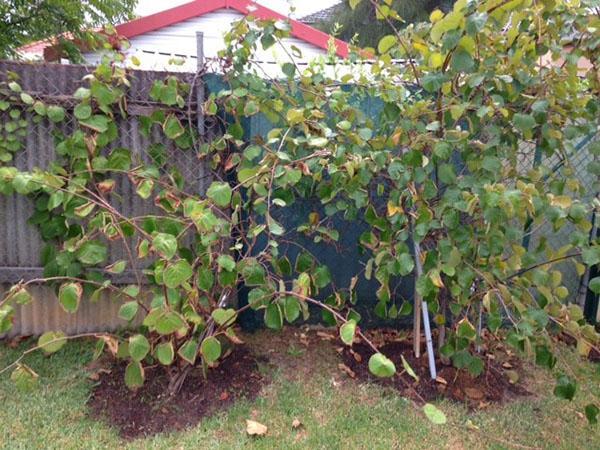 Spring is the best time to settle in a new place of residence and young plants, up to 3 years of age, and transplanted large specimens. If the planting of actinidia in the spring for some reason failed, the right time is in the fall. Here, the most important thing is to choose the right moment, otherwise the plant that did not have time to take root is cut off from nutrition, finds itself in an extremely stressful situation. Not only does it leave before winter not quite prepared, in March and April there is often a change of thaw and frost. Therefore, there is a great risk that the garden liana may freeze or die altogether..

To simplify the subsequent care of actinidia, it is better to plan planting 3-4 weeks before the average arrival of autumn frosts..

Choosing a place for planting actinidia 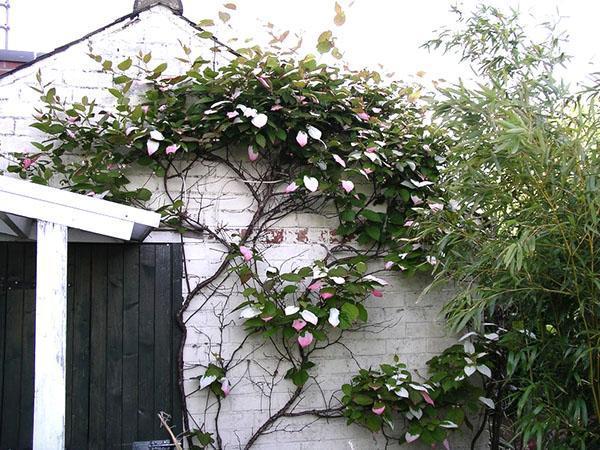 Treelike vines of various actinidia species in nature settle under the crowns of trees and, as they grow, climb up the trunks and branches. In the garden for this culture, you need to choose such a place so that the plant is provided for many years to come:

At the same time, actinidia does not tolerate the proximity of groundwater, suffers if its roots and lower parts of the trunk are flooded or submerged in dense soil without access to oxygen.

In order not to waste time protecting plants from frost, sunburn, or decay, to facilitate the care of actinidia, they are trying to plant in the Leningrad region and other northern regions to the north or northeast of buildings and fences. Here the liana will open its leaves a little later, but it will definitely not suffer from return frosts and ice crust formed in the sun..

The farther south, the faster the snow melts. Therefore, already in the middle lane, as well as when planting and caring for actinidia in Ukraine, in the Russian Kuban and in the Crimea, there are much fewer restrictions on choosing a place. Summer sunburns are not terrible for the culture, the fruits need sun or light partial shade, and protection from the wind is important for young seedlings.

Actinidia pollen can be transported over considerable distances, and yet it is better to plant female and male plants in close proximity, but not less than at a distance of 1–2 meters from each other..

If you have to create a living wall of actinidia kolomikt, planting is allowed at intervals of about 60 cm.For large plantations, it is convenient to use planting in rows located from north to south. In this case, the plants receive thawed moisture longer in spring and are evenly illuminated..

Planting actinidia and caring for seedlings 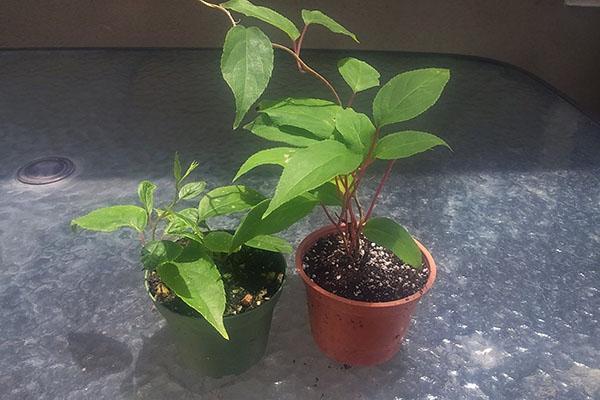 Planting pits for actinidia are prepared for two weeks before transferring seedlings to the ground. For two-year-old plants, holes with a depth and width of no more than half a meter are enough. At the bottom, it is useful to triple the drainage from expanded clay, broken brick or medium-sized pebbles. In order for actinidia to grow quickly after transplantation, the soil is mixed with well-sorted humus or peat mixed with a complex fertilizer based on nitrogen, potassium and phosphorus. The landing pit may require:

Do not use preparations with chlorine, which inhibits the growth of actinidia, fresh manure and lime. It is useful to deoxidize the soil, especially in the presence of peat..

When the place for planting is prepared, the care of actinidia consists in processing its root system. The roots of the plant are sensitive to drying out, therefore, after removing dead or damaged parts, it is better to dip them in a liquid clay solution.

In the planting pit, the seedling is placed on a mound of nutrient-rich soil. The root system is straightened, a support is installed next to it, which will be the first to take on the weight of the growing liana. After that, the seedling is carefully sprinkled so that the root collar of the plant does not go under the soil. Pick-up location: 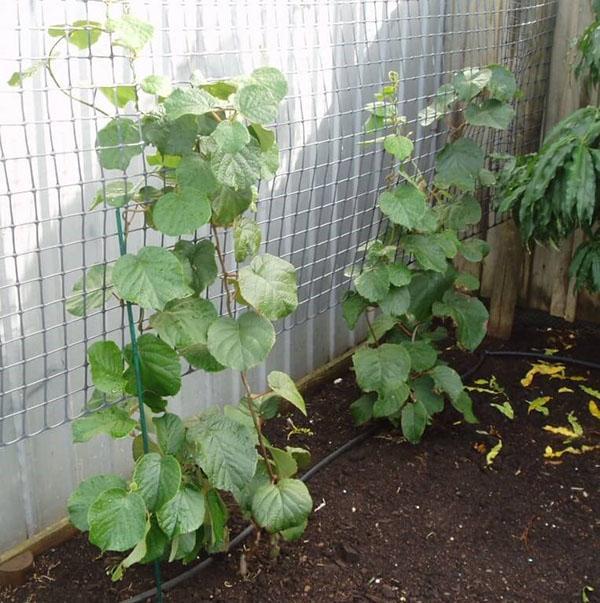 In the future, when the young actinidia grows up, it will need a more powerful support, for example, a trellis or arch, fence or wall of the house.

In addition to support, the seedling at the beginning of life needs protection from cats, which often gnaw or simply break the plant. Therefore, a fence is made around the stem of a metal or strong plastic mesh with a height of about half a meter..

Caring for actinidia after planting 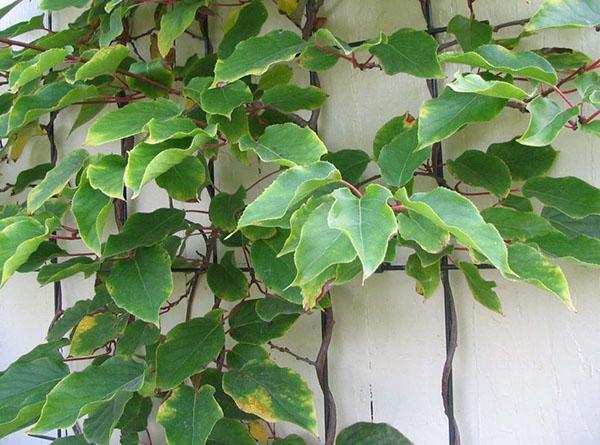 The Far Eastern beauty actinidia, when planting and nursing in the Moscow region and in other areas of the middle lane, has established itself as an agreeable and non-capricious culture. For good growth and stable fruiting of actinidia, it is required:

The culture does not tolerate the drying out of the root system, which can be answered by the fall of foliage, flowers and ovaries, therefore, in the warm season, vines are watered at the rate of 60-100 liters per adult plant.

Watering and sprinkling is carried out in the early morning or evening, so that before the active sun appears, the leaves dry out and do not become covered with burn spots.

Spring dressing should contain 2 parts of nitrogen fertilizers and one part of potash and phosphorus supplements. In summer, the proportions are the same, but the concentration of the composition is halved. In the fall, in order for the vine to slow down the formation of foliage, new shoots and strengthen the existing branches, it is supplied with potassium and phosphorus without adding nitrogen. 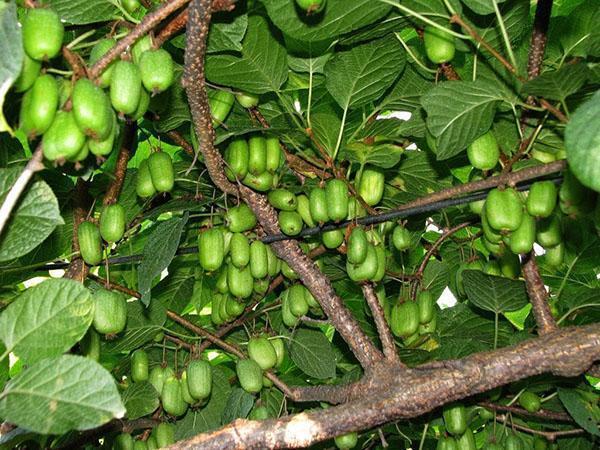 Feeding actinidia after planting is included only in the fall. You need to wait for the first fruits from the plant in 3-4 years. Stable yield comes only after 6 years of age and only if the crown is trimmed correctly.

As a rule, actinidia hardly suffers from the winter cold. Only immature summer shoots can freeze, so in the fall they are pruned, and branches that create excessive density are also removed, provoking the resettlement of harmful fungi, rot, insect pests.

Autumn pruning is carried out after harvest, when the growing season is declining. In the spring, this procedure is carried out very early, until the plant wakes up, otherwise the shoots will expire with juices.. 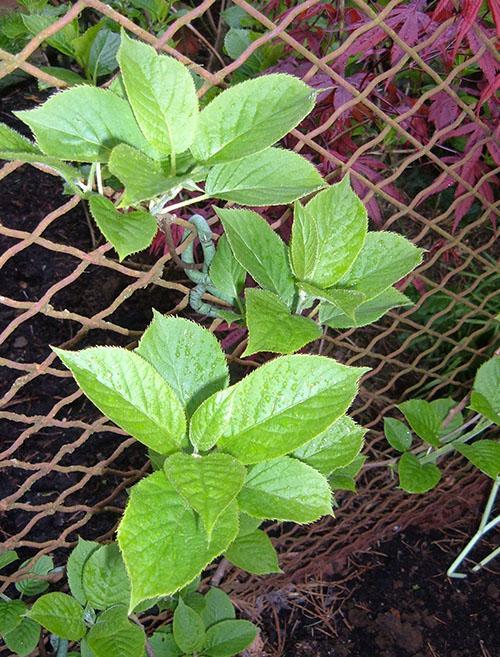 When planting and caring for actinidia in the Moscow region, in the Urals and other regions, most often the formation of a bush is carried out on two main shoots. To the south, where summer is longer and there is less risk of freezing of young growth, you can try to grow a more powerful specimen. You can improve the ripening of shoots by gently pinching them after the formation of the ovary..

Young vines in the fall are removed from the support and tilted to the ground, covered with peat, spruce branches or other material. Such care for actinidia after planting beyond the Urals, in Siberia and in the north of the European part helps to protect the plants from freezing. Adult specimens are only pruned, removing fragile and damaged wood.

Agrotechnics of actinidia in Siberia – video