Edible and false mushrooms: how not to fall into a dangerous trap

Forest mushrooms everywhere attract special attention of fans of original food, because they can be boiled, fried, pickled, salted and dried. Unfortunately, in nature there are edible and false mushrooms, which often end up in the basket of inexperienced mushroom pickers. Before going out into the forest, it would be wise to get to know the mushrooms growing in the area where we live..

The main symptoms of poisoning with inedible mushrooms occur several hours after they are eaten. A sharp headache, nausea, dizziness, intestinal cramps signal a problem.. 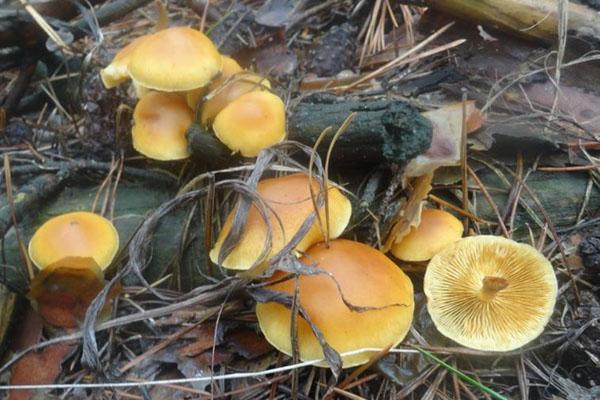 Who doesn’t like going into the forest to pick mushrooms and collecting a full basket or bucket in a few hours? This is exactly the case with mushrooms. After all, they grow up in huge families of several dozen pieces, located in a small area. For the campaign to end successfully, it is important for everyone to know how to distinguish mushrooms from false mushrooms. Otherwise, the joy can be replaced by the bitterness of food poisoning. Let’s take a look at the edible and safe specimens first. And then, remove the “mask” from false mushrooms that strive to get into the basket of inexperienced mushroom pickers. 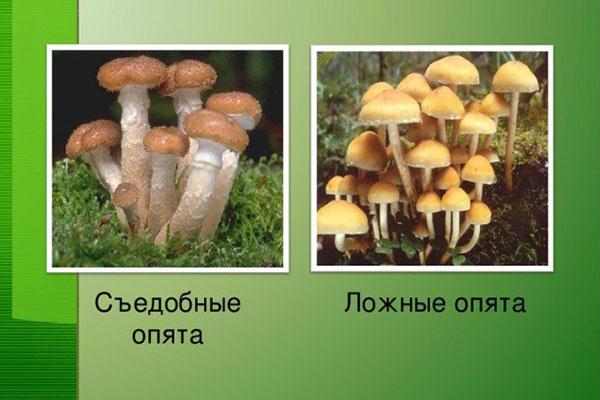 Experts advise paying attention to several criteria that help to notice the dangerous difference between edible and false mushrooms:

Of course, all these criteria are very important, but if doubts remain after research, we apply the main principle: “If you are not sure – don’t take it!”.

Inexperienced mushroom pickers should not go for mushrooms alone. Practical advice from a specialist will help you not to fall into the trap of greed, but to take only edible mushrooms. 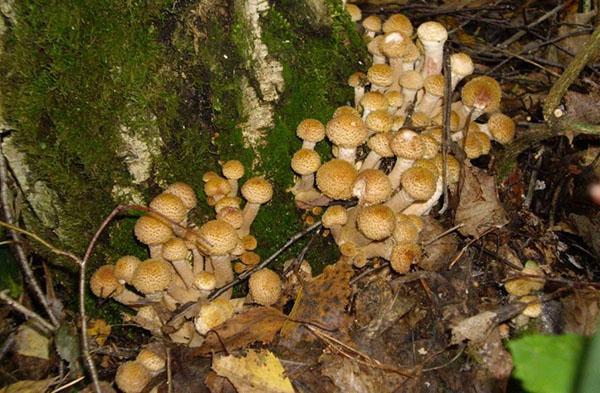 To learn to distinguish edible and false mushrooms from each other, it is important to have a good understanding of the peculiarities of the growth of these plants. As you know, in nature, there are many different types of honey agarics. But all of them are united by the common indicators of these cute mushrooms. It turns out that it is not enough to know how mushrooms look from the outside. It’s important to get to know them better. 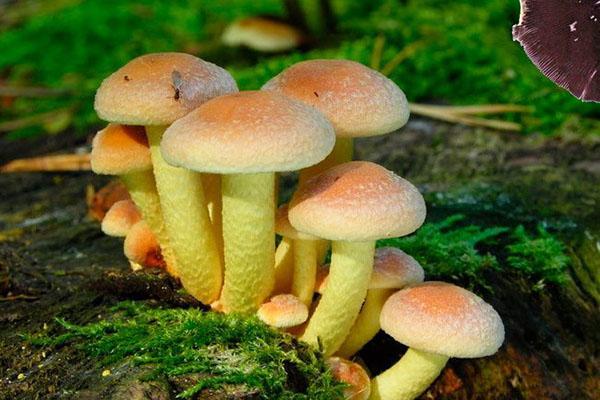 Edible mushrooms most often grow in large groups next to tree stumps or tree roots protruding from the soil. When they just poke out of the soft forest soil, they are adorned with a semicircular cap. In older specimens, it completely changes shape. Now it looks more like a wide plate turned upside down. 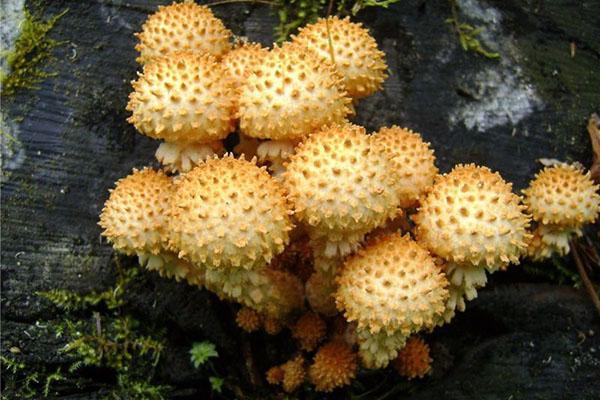 Looking at the photo of false and edible mushrooms, you can notice differences in the coloring and size of the hats. It can be such shades:

The diameter of the cap reaches up to 10 cm. Its outer part is covered with scales, which partially disappear over time. The back plates of the cap in young honey agarics are usually light. In mature specimens, they are colored brown or yellowish..

If you carefully examine the legs of edible specimens, you will notice that they are hollow inside. In addition, they are decorated with a leathery ring, which was formed from the protective blanket of a young mushroom..

The pulp has a light brown color, which does not change even when water gets on it.

Know the enemy better by sight 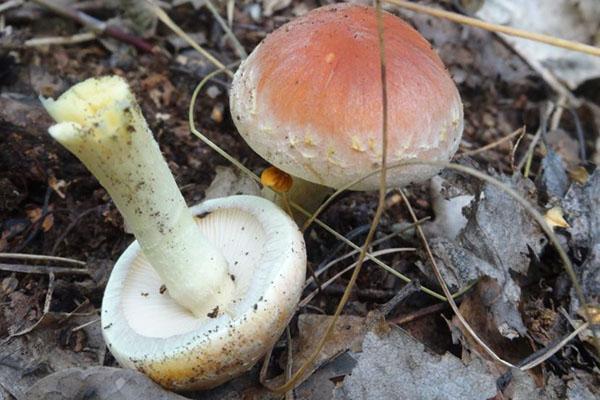 With the onset of autumn, when the sun still pampers people with its warm rays, many go to the forest for mushrooms. Places with fallen trees or low stumps covered with many pretty mushrooms look especially attractive. But in order not to run into disguised “enemies”, it is worth getting to know more about false experiences. How to distinguish them from edible relatives and not accidentally put them in the basket and then on the table? Consider some types of such inedible options.

Inexperienced fans of forest gifts should take into account that false mushrooms can grow in the neighborhood of edible specimens of the same friendly families. 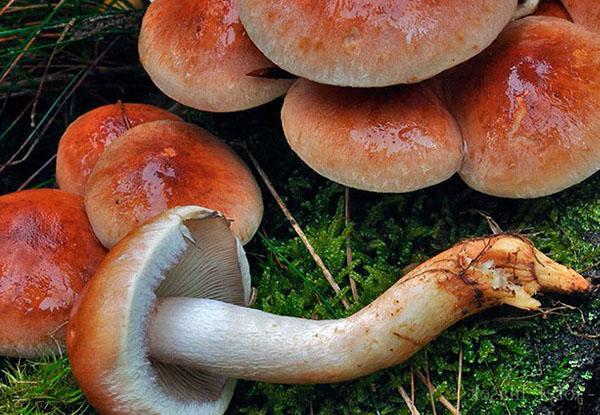 At the end of August, on forest edges among old stumps and fallen trees, autumn false honey grows in large groups. The photo helps to see this disguised “enemy” in all its glory. Most often, its convex cap is from 4 to 8 cm. In its mature form, it opens a little, thereby, becoming similar to its relatives. The fundamental difference is the brick-red color of the outer cover of the cap. The pulp of the mushroom has a bitter taste and a pale yellow color.. 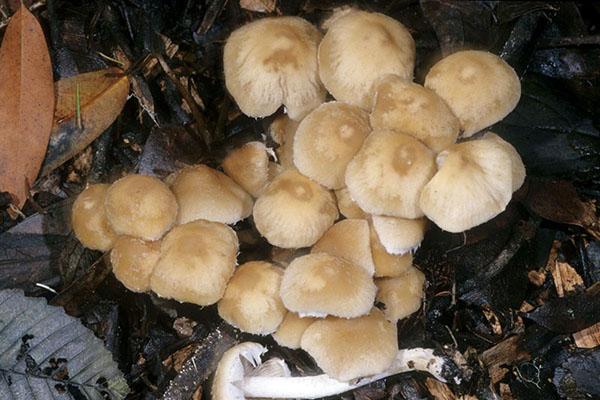 These false mushrooms “settle” in large families near the stumps and roots of age-old deciduous trees. They appear in late spring and bear fruit until early September. A distinctive feature of young mushrooms of this species is a bell-shaped hat. Over time, it opens like an umbrella, on top of which a convex tubercle flaunts. The edges of the cap of this camouflaged mushroom are framed by a light fringe, which is left from the protective blanket. Its diameter is from 3 to 7 cm.Color is most often yellow-brown, although it can be whitish.. 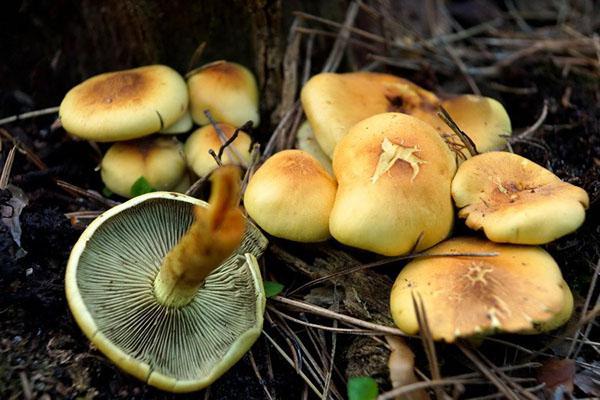 This autumn mushroom is a truly dangerous counterpart. The name and photo of the mushroom tell a lot about it. Typically, sulfur-yellow honey agaric grows on trunks, branches, stumps and around deciduous and coniferous trees. Depending on climatic conditions, it actively bears fruit until the first October frosts. At the same time, it grows in numerous groups.

His hat, reminiscent of a bell, eventually transforms into an “open umbrella” and is distinguished by the following coloring:

Contrast shading is observed in the center of the cap. If such mushrooms end up on the dinner table of fans of forest gifts, the outcome may be irreparable. Therefore, knowing what false mushrooms are dangerous helps to stay away from them..

This type of mushroom rightfully deserves special attention, as it is an exquisite delicacy for fans of forest gifts. Edible specimens have a wide bell-shaped cap of a rusty yellow or olive color. The whole fruit is abundantly covered with brown scales, resembling flakes or graceful tubercles. And the pulp of royal honey agarics is colored yellow. 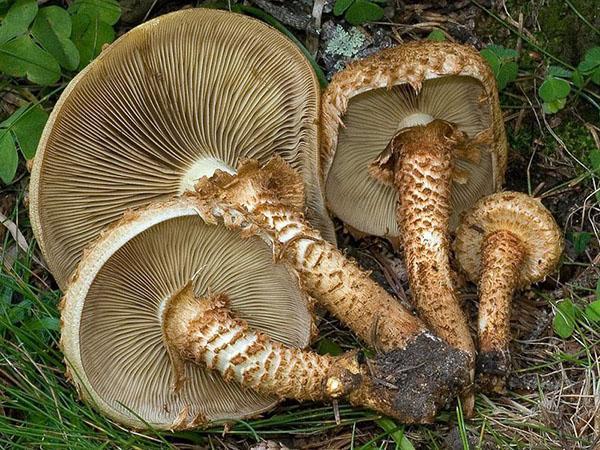 It is best to pick mushrooms that have slimy caps that are smooth to the touch. If the fruit has a dark shade, then it is no longer young.. 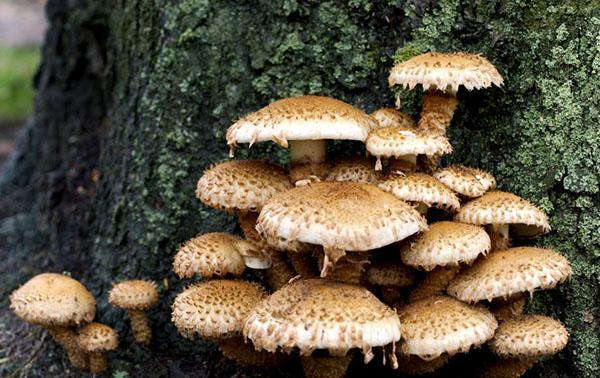 Despite such popularity, disguised false royal mushrooms are also found in nature. Often they grow on the sites of old ashes or fires that are already overgrown with grass. And the pulp of such mushrooms smells unpleasant, which is one of the hallmarks of these poisonous mushrooms. Some of them become slimy in the rainy season, and also have a small number of scales. With age, the graceful caps of false agarics change, which indicates their unsuitability for nutrition..

Learning to distinguish between edible and false mushrooms – video