How to protect your garden from apple blossom beetle weevil 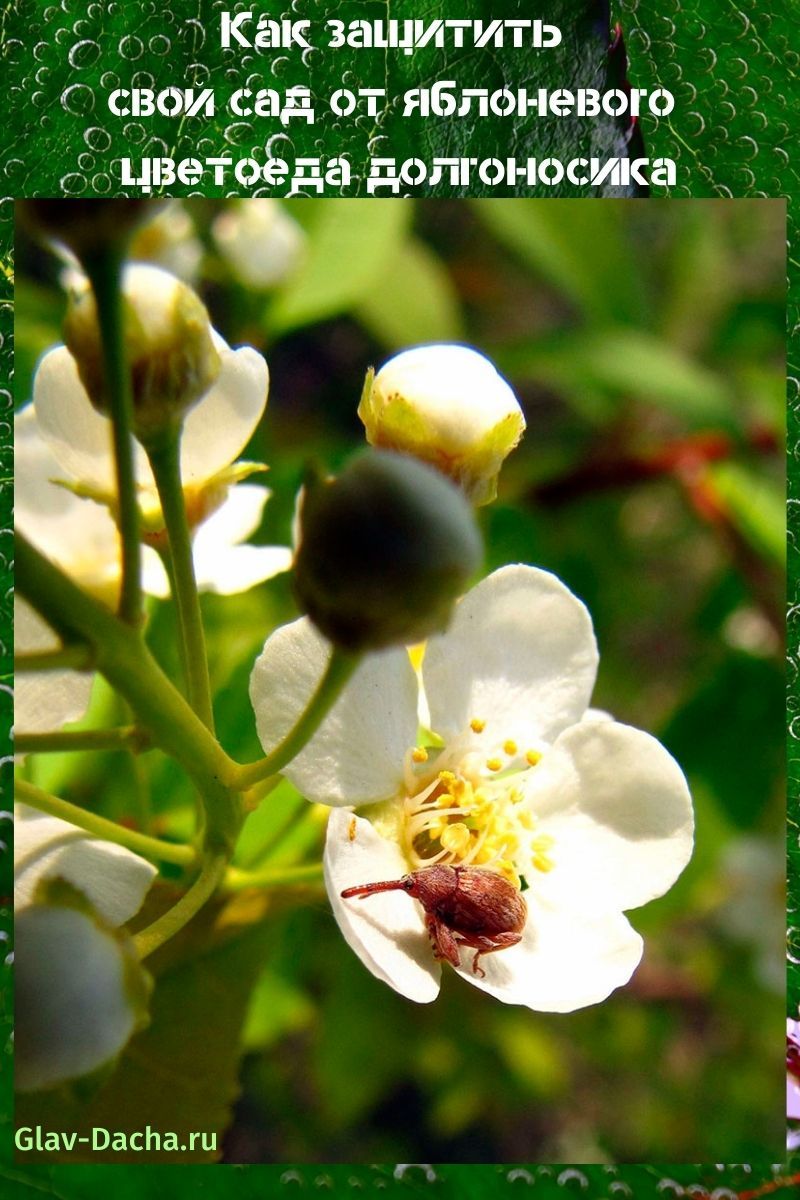 Among the huge number of insects, the apple flower beetle weevil is considered the most dangerous enemy. In a short time, he mercilessly destroys the entire crop. What does an insect look like from the side? By what signs do experienced gardeners recognize its presence? What methods of dealing with it are considered the most effective and safe for humans? Find out what experts say.

Apple blossom beetle weevil in all its glory 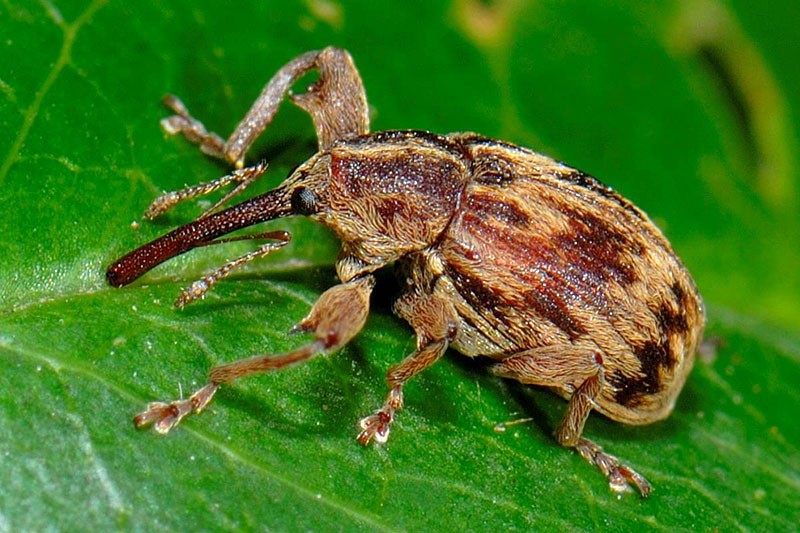 The insect belongs to the family of the same name, which includes the order “Beetles”. The length of an adult reaches only 0.5 cm. The body is colored brown or dark gray. In the elytra, 2 white stripes are visible, which gives it a nice look. The oblong head has a long proboscis and a miniature mouth. In females, this part of the body is much larger than in males..

The paws of the apple blossom beetle weevil are colored reddish. They are equipped with “powerful” spines, which are large on the front of the limbs, and small on the outer ones. An adult insect moves wonderfully with the help of its wings..

In winter, young individuals hide under a thick layer of fallen leaves or in cracks in the bark of trees. When spring comes and the air temperature rises to about + 6-7 ° C, insects leave their shelter.

This usually occurs during the period when the first apple buds appear. They become the favorite delicacy of weevils.. 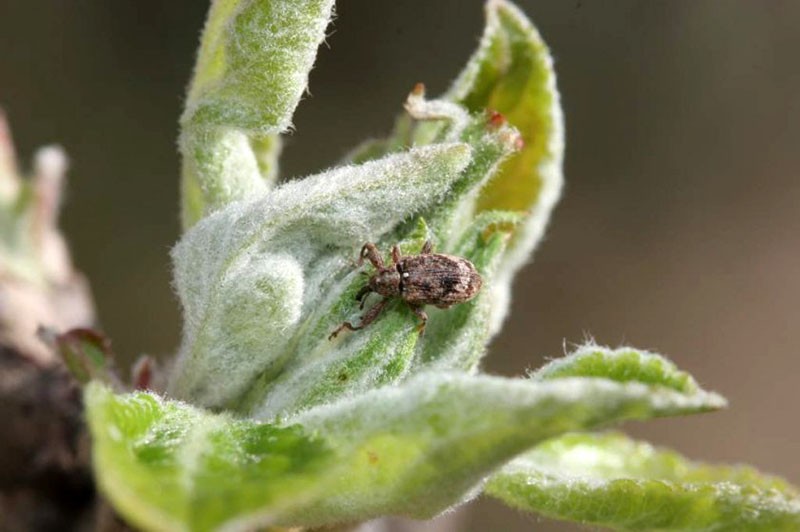 The female lays eggs inside the inflorescences. Scientists have calculated that their number reaches from 50 to 100 pieces. After a few days, voracious larvae appear. They quickly destroy unblown buds, which leads to the loss of a valuable crop. In just 10 days, young beetles are formed from them..

Over time, their wings become stronger, with the help of which they leave their “maternity hospital”. Until mid-summer, insects eat leafy plates of fruit crops, gaining body weight. Interestingly, only 4 females are able to destroy a small apple tree. In the last decade of August, they again find refuge under the bark of trees..

The presence of pests on an apple tree leads to the formation of all sorts of growths or dwarf fruits.

Warning signs of the presence of the enemy 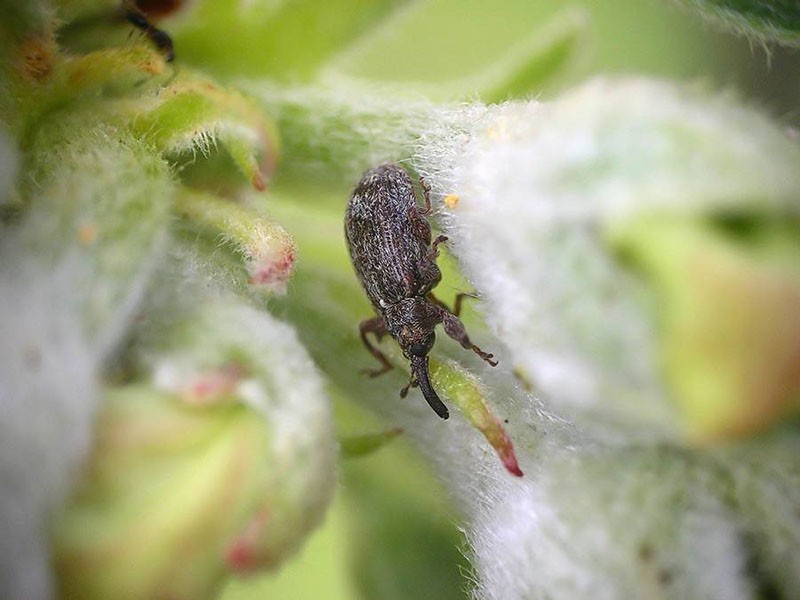 An active fight against the apple blossom beetle begins from a review of garden estates. The detour is usually done on clear days when the sun is at its zenith. If unopened buds are found on the branches, then it’s time to act. They are being scrutinized.

Holes are visible on the affected elements, as if they had been injected with a syringe. Drops of juice protrude from it, which sparkle in bright sunlight. Although the sight is admirable, there is an army of pests behind it. To save the harvest, we will learn how to deal with the weevil on the apple tree and win this war.. 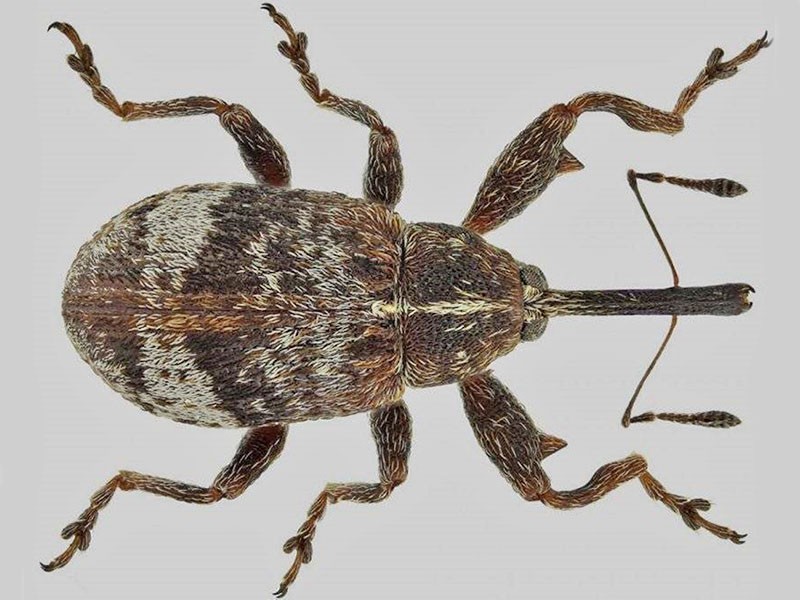 The famous phrase: “It’s hard to learn – easy to fight” – shows the importance of theoretical knowledge. It is impossible to win the war without them, even if there are miniature beetles on the other side of the “barricades”.

Experts use such proven methods:

In addition, some gardeners make special traps. From the side, they resemble an ordinary belt. It is attached to the stem of a fruit crop in early spring. Thanks to this, the awakened apple flower beetles weevils do not fall on the branches, where buds and buds begin to bloom. However, the adaptation protects only from wingless beetles that are at the developmental stage. Therefore, we will analyze more efficient options.. 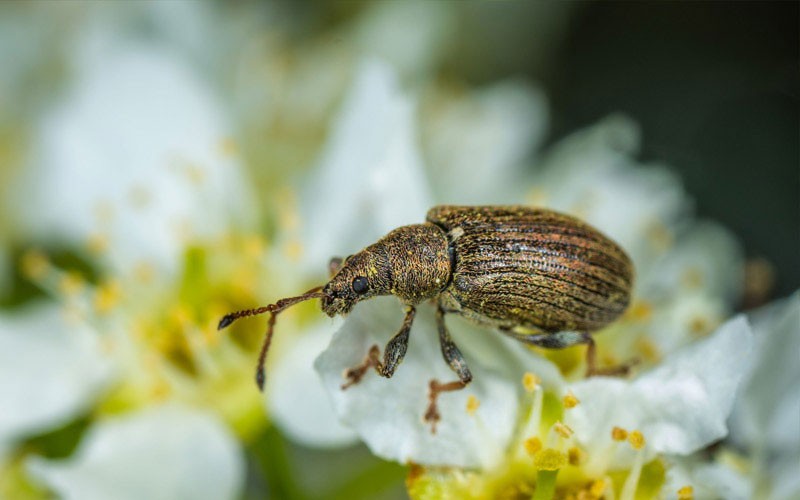 The weight categories of people and insects are, of course, different. However, the harm they do to apple trees causes anger among gardeners. So they have to fight them one on one. 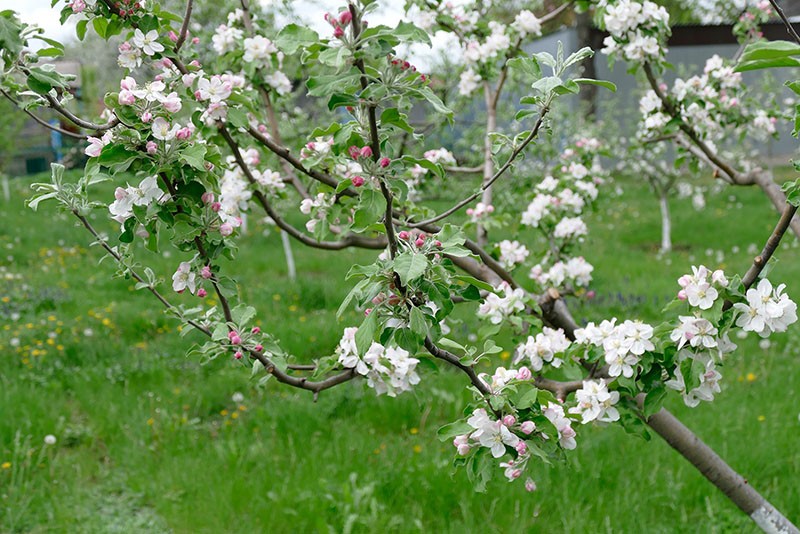 The mechanical method involves a simple procedure. In early spring, when the air warms up to about + 5 ° C, the beetles leave their shelters and crawl out. It is this time that is considered the most favorable to defeat them. In the early morning, gardeners shake off insects from the branches, protecting the awakening plant from them.

Before flowering, it is advisable to carry out at least 3-4 procedures.

Use of “chemical weapons” 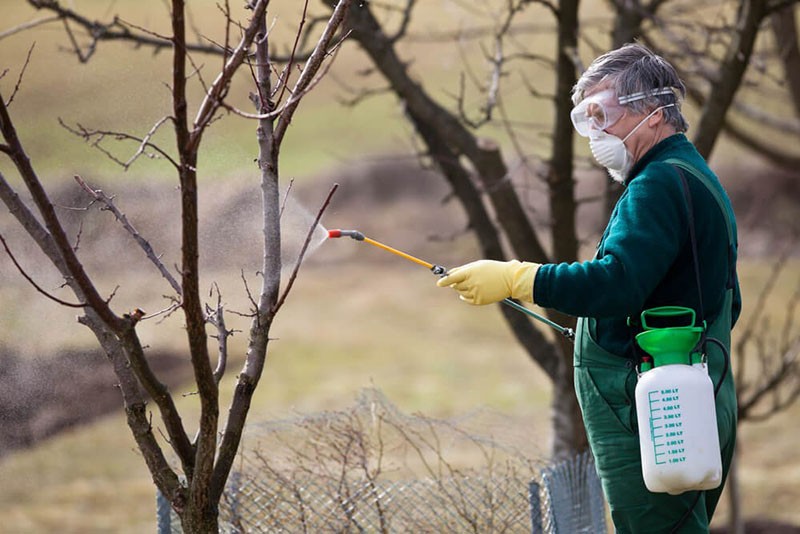 New substances are constantly appearing on the shelves of specialized stores to eliminate garden pests. Many of them are suitable for combating the apple blossom beetle in spring and high season..

Most often, experts use such drugs.:

The first treatment is carried out before the beginning of inflorescence swelling. The chemicals kill adults that have not yet had time to lay eggs. Unfortunately, they do not penetrate deep into the buds and buds. Therefore, it is important to do the procedure on time.. 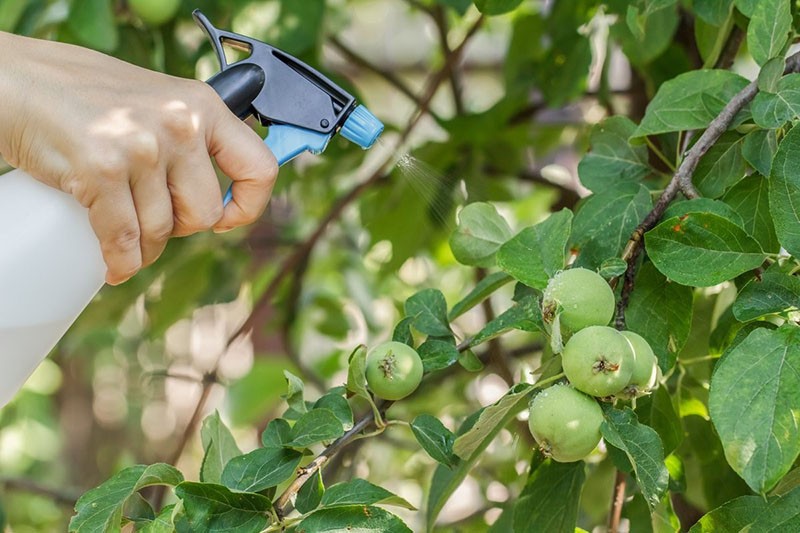 The next spraying is carried out in the middle of summer, when the fruits have already set on the tree. Due to this, the number of weevils ready for wintering decreases. Unfortunately, the chemical method has several disadvantages. At the same time, not only pests are destroyed, but also useful insects. Chemicals also have a detrimental effect on fruit crop yields..

If the selected drug is used for the first time, then one apple tree is first sprayed. Then she is closely watched during the day. If the result is positive, start processing all trees..

Personal protective equipment must be worn when processing trees..

We call on the “allied troops” 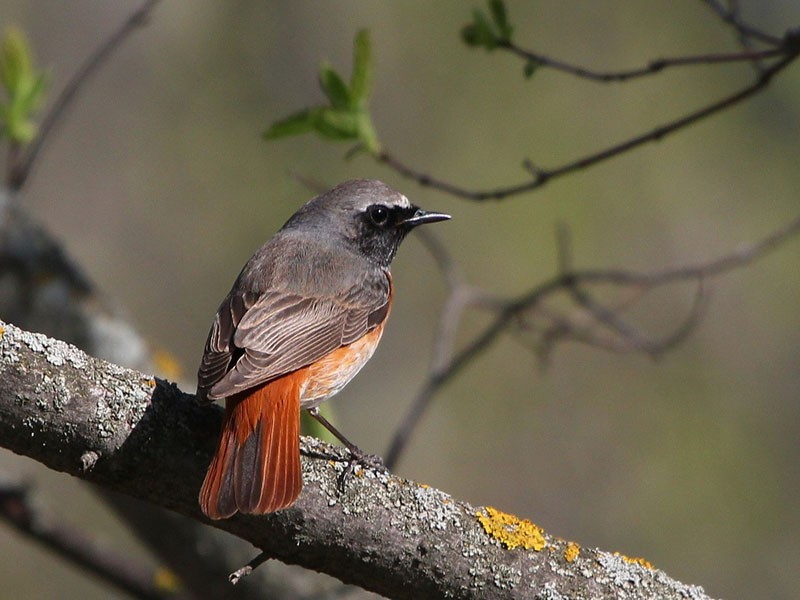 Feathered friends make a huge contribution to the victory over the apple blossom beetle. They love to feast on protein “delicacy”.

Of course, the “allied forces” will not be able to eliminate the problem with lightning speed. However, they can thin out the enemy army. They are attracted gradually. For example, feeders are installed for tits in winter. And migratory birds, try not to scare away.

Prevention is a valuable contribution to victory 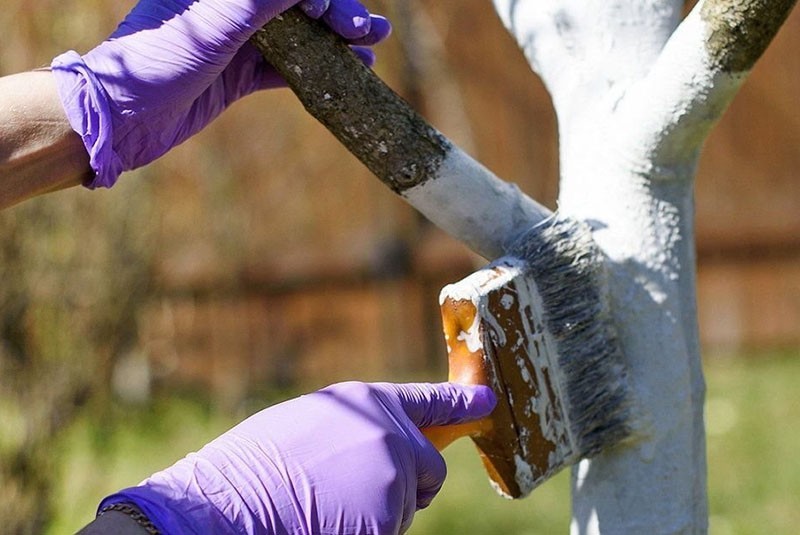 There are many cases in history when the warring parties conclude a truce.

Likewise, gardeners take a number of preventive measures to protect the garden from weevils.:

In addition, folk compositions are a wonderful remedy for the flower beetle on apple trees. They are prepared from the tops of tomatoes, wormwood, onion and garlic husks. Every autumn, the fallen leaves are carefully scooped out of the garden and carried to the compost pit.. 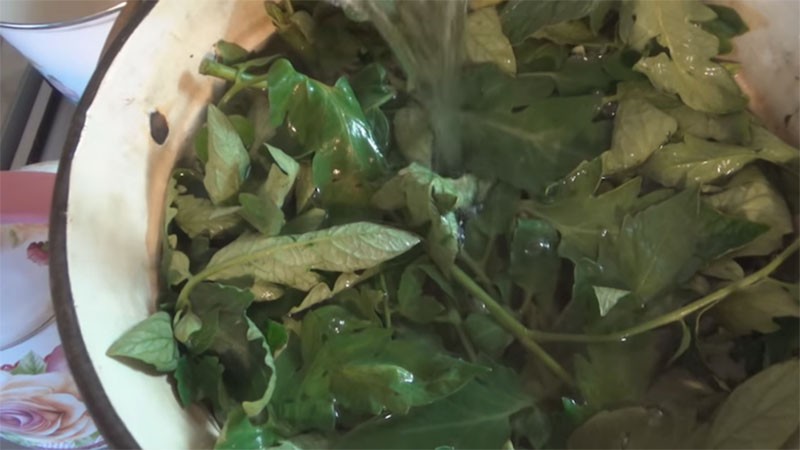 The cleared area near fruit crops is dug up with a shovel. Practice has shown that simple preventive measures lead to the peaceful coexistence of man with nature and insects..

Having considered the current measures to combat the apple blossom beetle, we understand on whose side success is. The main thing is not to waste time, find a suitable method and even offer “peace” to inveterate pests. Thanks to this, juicy fruits will grow on the trees, which will delight our hearts..