The advantage of using agrofibre when growing vegetables in summer cottages 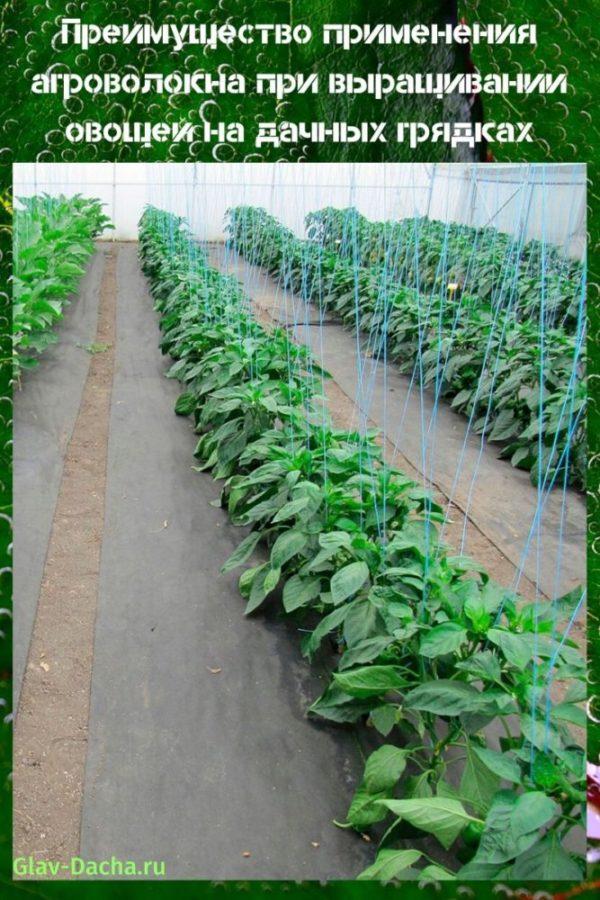 Agrofibre or spunbond is one of the most popular types of covering materials for the garden and vegetable garden, characterized by strength, lightness and excellent performance. The use of agrofibre provides a reliable shelter for the beds from the piercing wind, frost and the scorching sun. 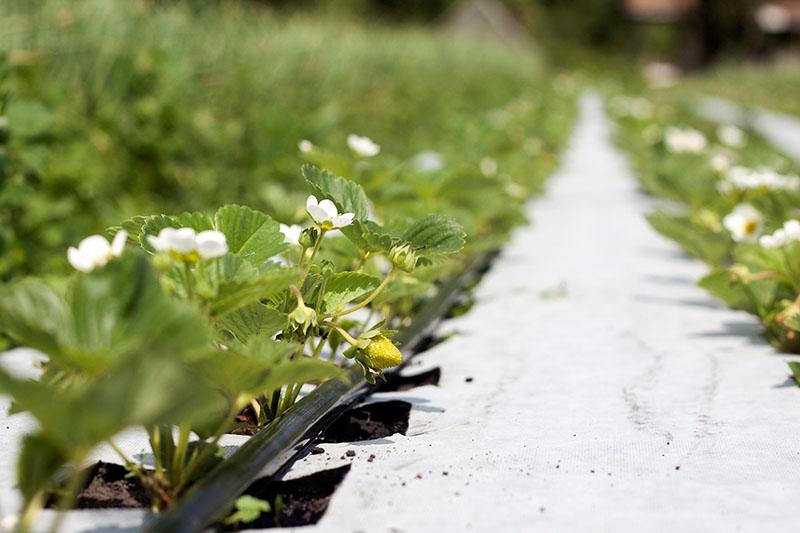 Many gardeners and gardeners know what agrofibre is and its use in growing vegetables and fruit and berry crops. It is an environmentally friendly non-woven polypropylene based material produced using the spunbond technique..

The method of manufacturing agrofibre is based on special heating of polymer threads. They are pressed through dies – special molds. The result is a non-woven fiber with excellent covering and breathability properties.. 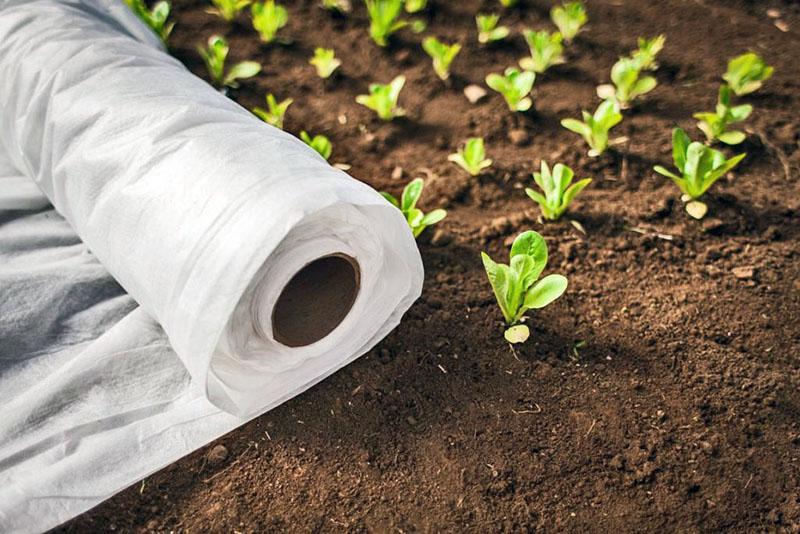 Externally, the material looks like a tape with a perforated structure or a vapor barrier film, with a high resistance to tearing and stretching.

The use of agrofibre has replaced outdated plastic shelters. It fits well and is suitable for greenhouses of any size, as well as for winter use.. 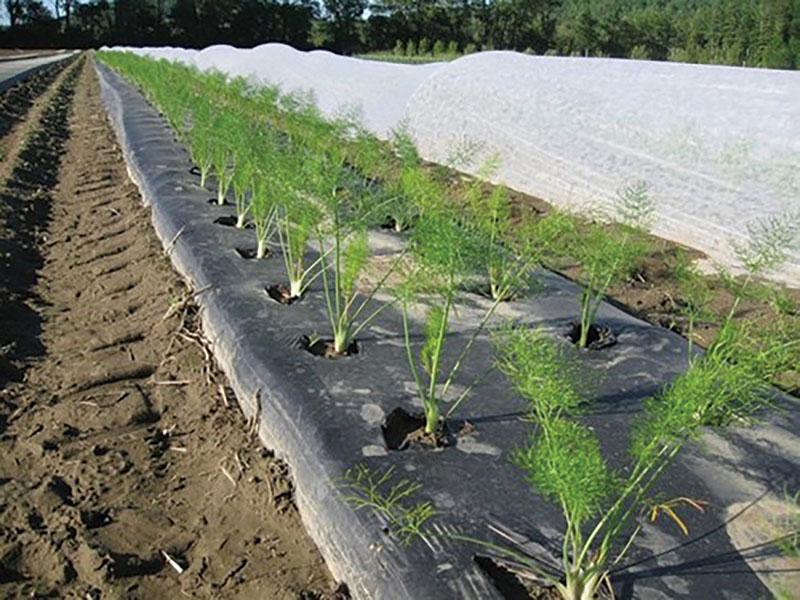 Agrofibre has become a practical and reliable alternative to covering polyethylene films.

When using agrofibre, the care of vegetable and fruit plants is greatly simplified. It allows oxygen to pass through and allows the soil to warm up without creating a condensation effect..

The main types and their features 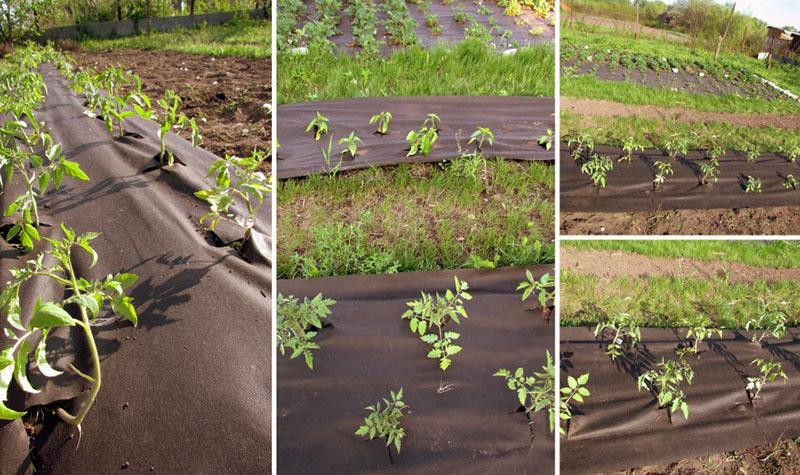 Agricultural agrofibre is produced in the form of rolls, the width of which is 1.6-3.2 m, the length is up to 100 m. Due to this, it is very convenient to use the material, cutting off the necessary fragments of the canvas.

Spunbond is divided into black and white. These types of agrofibers differ not only in color, but also in density, properties and purpose. Differences in characteristics determine the life of the coating, features and rules for its use. 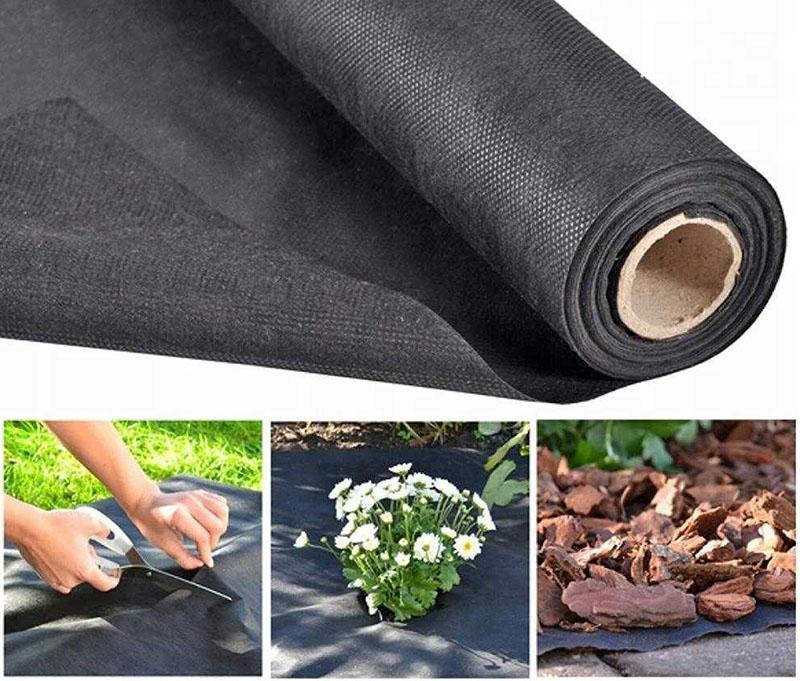 This type of agrofibre is called mulching. Black fiber has a standard density of 50-60 gsm. The use of black agrofibre is most often associated with covering the ground before planting a variety of vegetable, fruit and berry crops. This ensures an optimal soil microbalance, which contributes to better rooting and full growth of plants.. 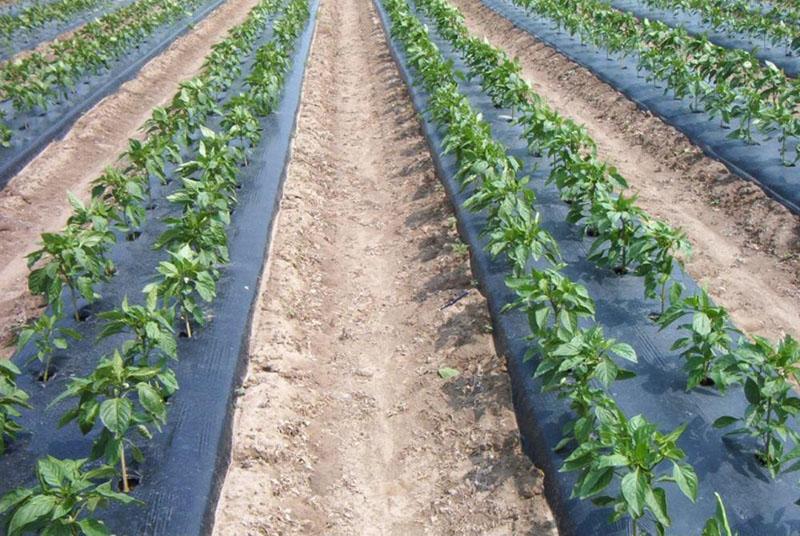 The use of mulching agrofibre stops the growth of weeds. The substrate is laid directly on the beds after they have been loosened and fertilized. The edges of the canvas are tightly fixed with pins or pressed by boards, bricks or other heavy objects.

The material of black agrofibre transmits light well, distributes it evenly over the garden bed, does not interfere with the penetration of oxygen. It is often used in the cultivation of perennial berries and vegetables.. 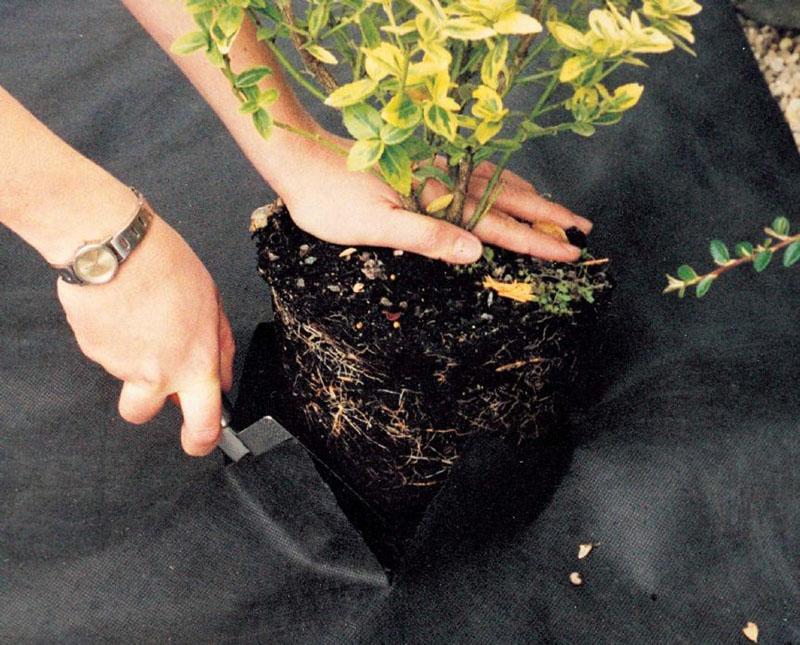 For this, the beds are lined with black fiber, on the surface of which several cross-shaped cuts are made. Seedlings are planted directly in these holes. After ripening, the plants are harvested, the material is cleaned of traces of soil and thoroughly dried. With proper seasonal storage, the service life of agrofibre will be up to 5 years. 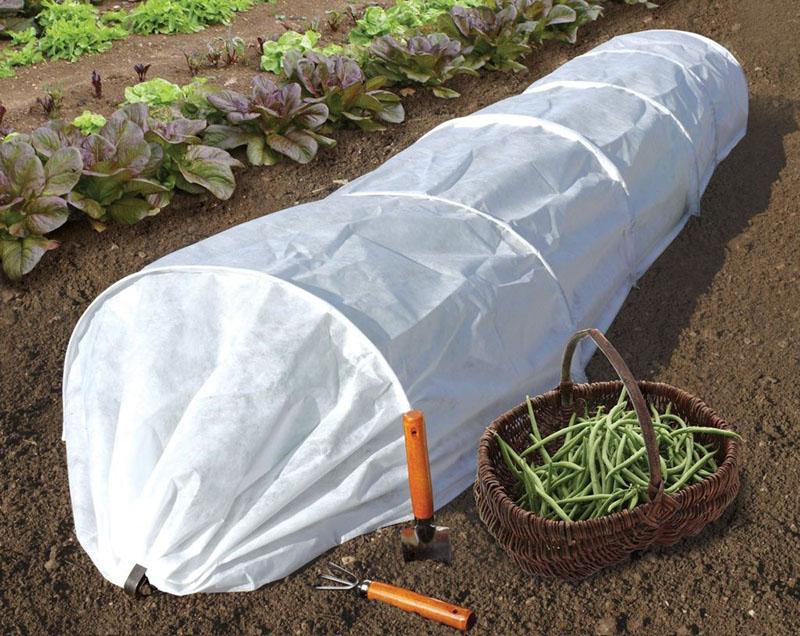 White agrofibre has a different density, which determines the scope of application of the covering material..

Density of agrofibre and its properties:

White agrofibre is considered a versatile material. It is much more reliable and denser than ordinary plastic film, it has excellent characteristics and durability.. 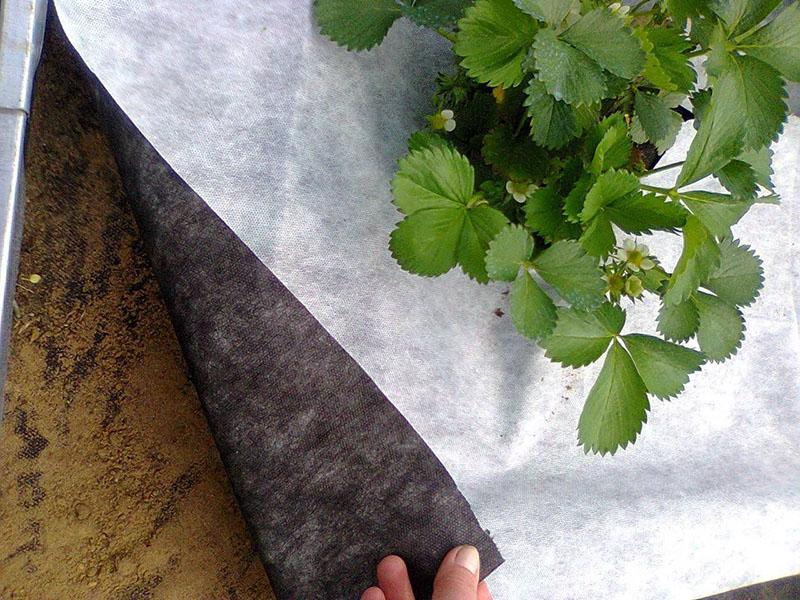 Black and white agrofibre is considered no less common. It has a two-layer structure, the upper part of which is white and the lower part is black. The main advantage of a two-color material is the ability to independently choose which side to cover the covering material.

Most often, agrofiber is laid with the white side up – this provides excellent air permeability and does not impair the passage of sunlight. The black part of the product is in direct contact with the soil, preventing weeds and insect pests.

You can also find black and yellow agrofibre on sale. It is an improved version of the black spunbond. When used as mulch, this material is laid with the yellow side up. This prevents overheating of the soil and the appearance of unwanted weeds..

Two-color canvases are widely used for mulching, sheltering plants for the winter, as well as in the field of landscape design.

Application of agrofibre and rules of use 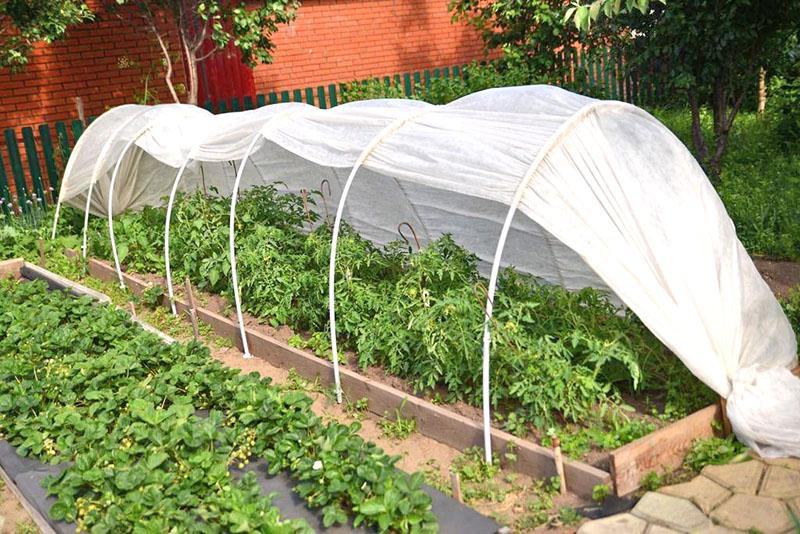 Agrofibre has found wide application in the cultivation of garden, horticultural and ornamental crops. The dense white materials are used as winter shelters for berry bushes and fruit trees. This type of shelter is considered the least traumatic for plants, as it allows oxygen to pass through well and at the same time reliably protects from wind and frost..

White and black agrofibre is applied in a variety of ways: 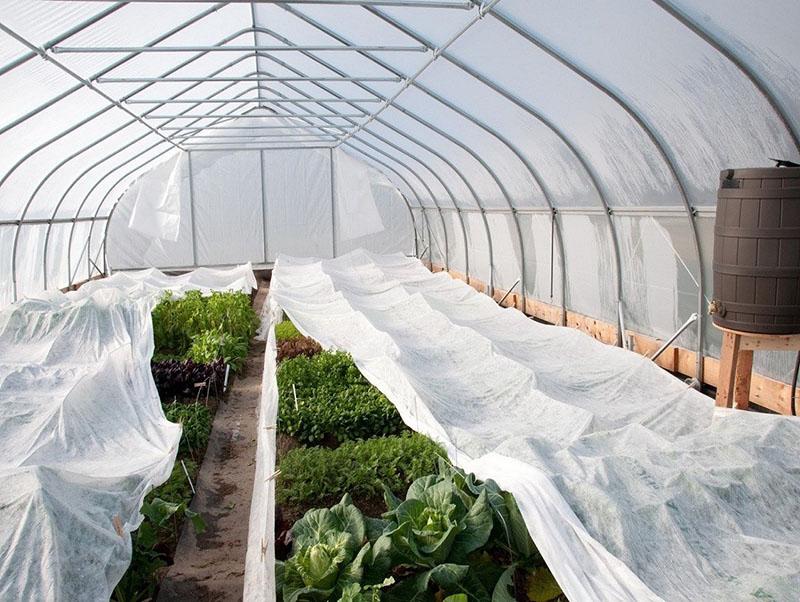 When using agrofibre, a favorable soil microclimate is created for the root system of plants. This material inhibits the evaporation of moisture from the soil, transmits and evenly distributes the sun’s rays, allowing the soil to warm up. The use of agrofibre in the cultivation of vegetable crops allows the first ripe fruits 15-20 days ahead of schedule.

The thinnest types of white agrofibre are used for seed germination. They are laid directly on the dug-up beds to retain heat, protect young shoots from direct sunlight and sudden temperature changes. Due to its ultra-light structure, it does not interfere with the active growth of seedlings.

Agrofibre is also often used in the landscape. Due to the black material, gabions are formed, it is used in the arrangement of paths, paving parking areas and driveways, as well as decorative islands.

How to choose agrofibre 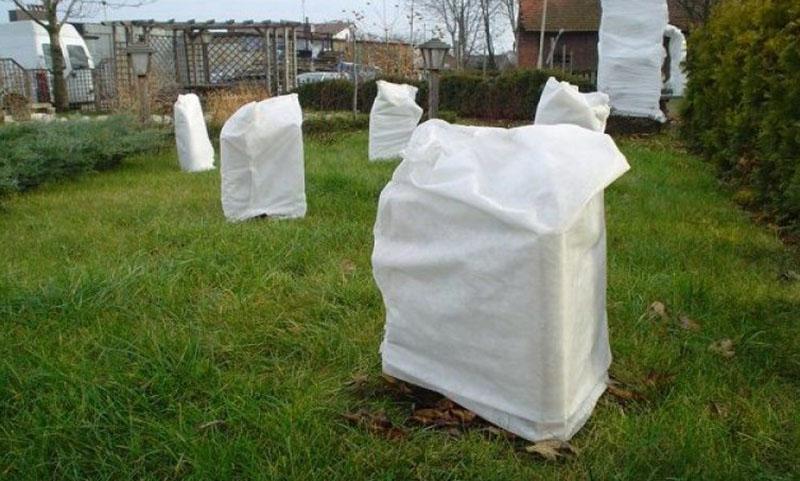 Before choosing agrofibre, you need to consider the purpose, scope and characteristics of the material..

To do this, you should pay attention to the following factors:

Agrofibre can be used to grow not only strawberries, but also other crops – cucumbers, tomatoes, white cabbage.

Agrofibre is an irreplaceable “helper” in the cultivation of vegetable, garden and ornamental plants. This material reliably shelters plants from frost and the scorching sun, protects against harmful environmental factors, prevents weed growth and allows you to get a rich, bountiful harvest..

The use of agrofibre and its types – video report