We observe the correct neighborhood in the beds, creating mixed plantings of vegetables 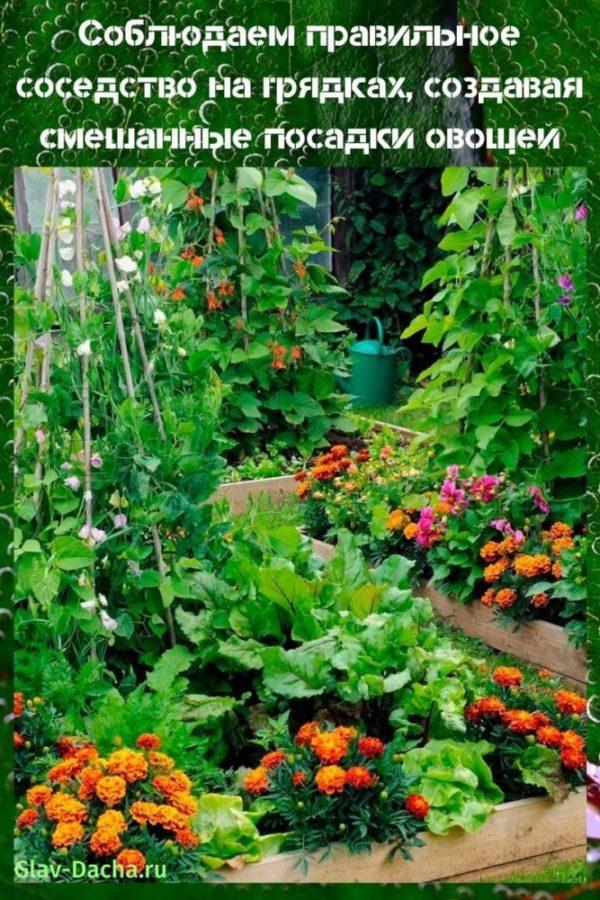 Mixed planting of vegetables is the simultaneous cultivation of several types of vegetables, flowers and berries mixed or according to a certain pattern. It helps to rationally use a limited personal plot, since every meter of fertile soil is used. Mutually grown plants have higher germination and yield rates, as well as better protection against diseases and insect pests. 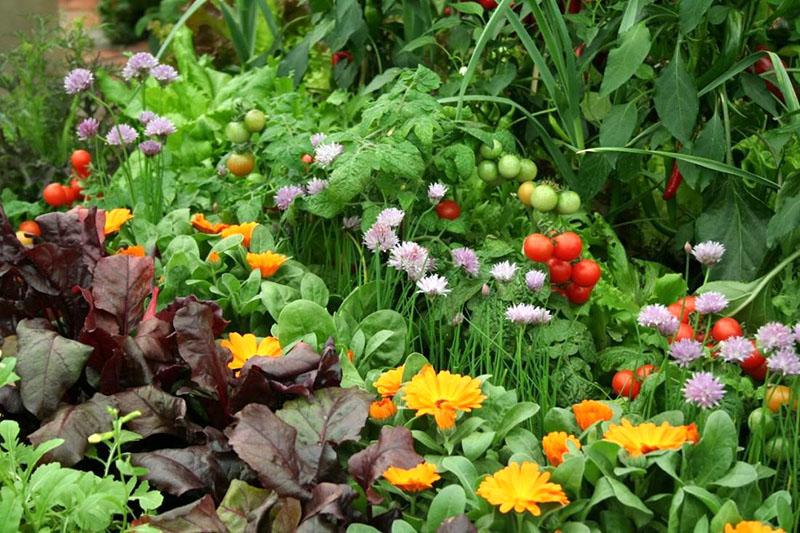 Combined planting of vegetables helps to maximize the productive use of the site, and also greatly facilitate the care of the plantings..

They can be of four types:

A simple mixed method involves planting several crops, taking into account the peculiarities of the agricultural technology of their cultivation. The area is calculated in such a way that each plant has enough moisture, lighting and nutrients. 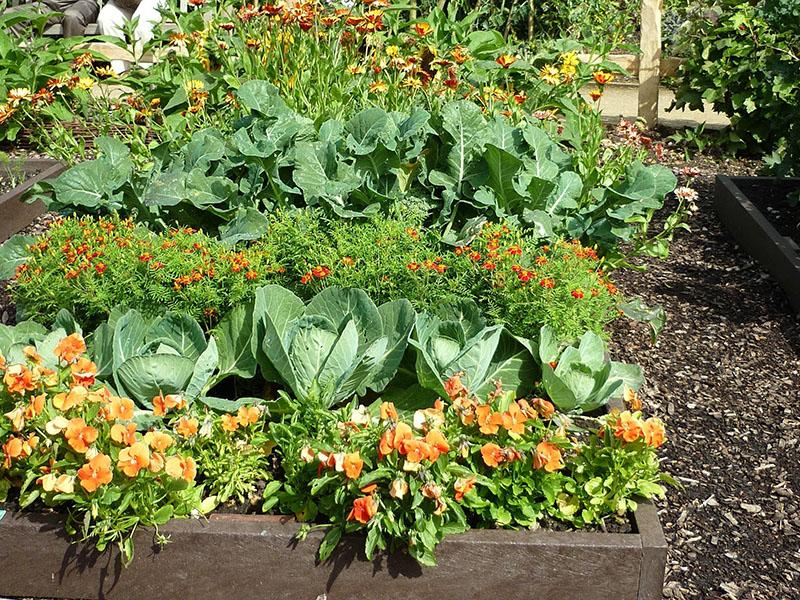 With intensive mixed planting of vegetables, their mutual influence on each other is taken into account. Due to the correct selection, the immunity and productivity of plants increases. The cultivation of green manures is carried out using the same technology..

Alternate plantings are based on the maturity of vegetables – early and late. Crops are not planted together, but this method makes it possible to grow two crops of different vegetables in one season..

When planting ahead, the plants are also not planted at the same time, the second crop is sown before the first crop is harvested. Plants are grown sequentially but grow on their own most of the time. 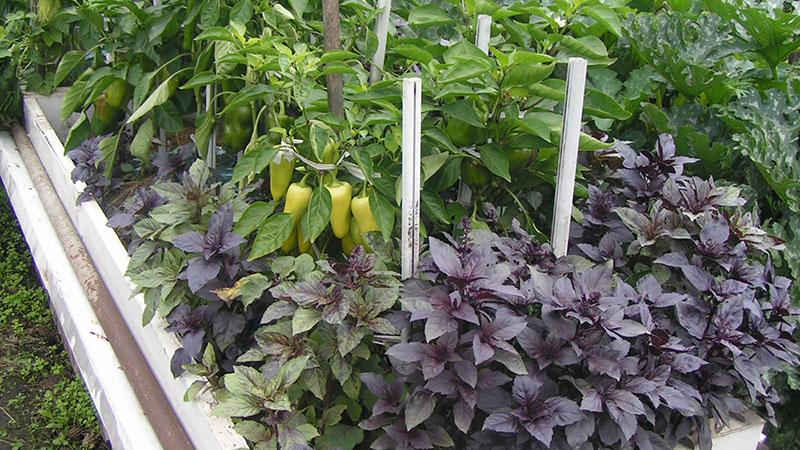 Joint planting of garden crops is great for small backyards. They have a positive effect on the improvement of the soil and its fertile composition, do not impoverish it due to the observance of the rules of crop rotation.

With properly organized mixed plantings of vegetables, the risk of diseases in plants, as well as the appearance of insect pests, is reduced.

Flowers can be planted near vegetable crops – it is desirable that the flowering period for these plants coincides. In this way, flowers will attract pollinating insects.. 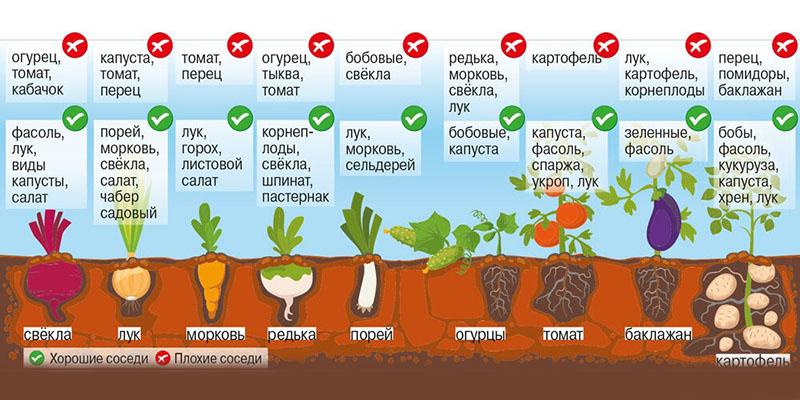 In a mixed planting, vegetables of the same family are not used – this is not only useless, but also harmful to plants. They have identical needs for moisture and nutrients, and are subject to the same diseases and pests..

A table of mixed plantings of vegetables in the garden will help you choose the right combination:

Mixed plantings of vegetables and flowers can be supplemented with almost any herb – cilantro, thyme, basil, lemon balm, marjoram, oregano, peppermint or sage. They have a rich aroma that repels insect pests and protects vegetable plants.. 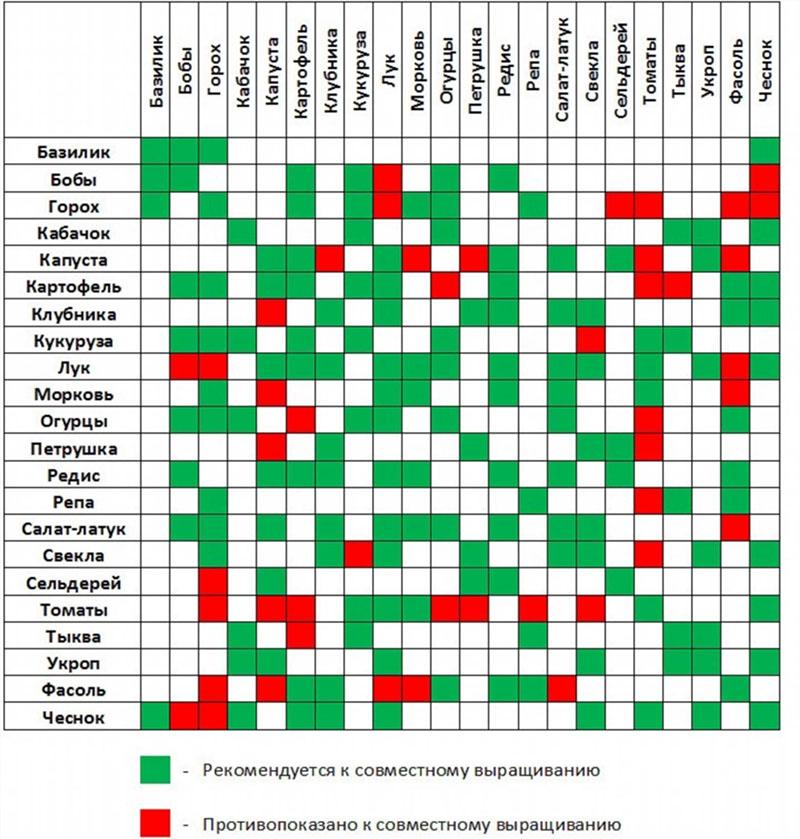 Examples of mixed planting of vegetables in the garden help to properly use fertile soil and get the maximum crop yield.

The following combinations are considered successful:

Spinach is considered a versatile crop that goes well with almost all vegetable plants and flowers. Its roots produce saponins – special substances that stimulate the growth of lettuce, radish, kohlrabi, beans, tomato, cauliflower and white cabbage.

When planting a mixed planting between plants, it is necessary to leave a distance of 5 cm (beets, garlic, carrots, peas, radishes) to 30-45 cm (broccoli, bell peppers, tomatoes). 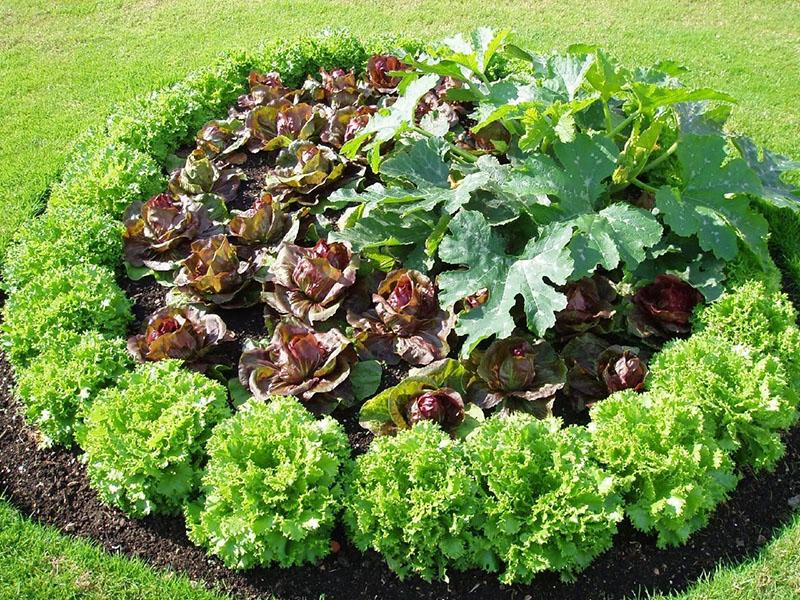 When organizing a combined planting, a vegetable bed can be arranged in the form of a flower bed. Tall plants with a long vegetative period are planted in its center. On the sides are planted low-growing, compact vegetable crops of early varieties.

Tomatoes with radishes, spinach, lettuce, radishes or radishes are best suited for growing in a flower bed. In such a composition, the main role is played by tomatoes, which are grown by the seedling method and transplanted to a permanent place immediately after the final warming of the soil..

When growing vegetables in a mixed bed, it is best to choose crops of different heights. Thanks to this, optimal conditions for their growth are created, the plants receive the shading and illumination they need..

Most often, with a mixed planting technique, three vegetable crops are planted in the beds – early, main and subsequent. In this case, it is imperative to take into account the previous plant, as well as the compatibility of different crops..

In the spring, after warming up the soil and pretreating it, early crops are planted with a solid carpet – for example, lettuce (early), radish. By the time they mature, they are thinned out and a subsequent plant is planted..

With a mixed planting of vegetables, staggered plants are most effective. After the radish and salad, you can plant beans or spinach, which will ripen at the same time as the remaining radish..

When these vegetable crops are harvested, leaf and head lettuce and cucumbers can be planted in their place. Kohlrabi, broccoli, or cabbage are good options. The optimal time for planting them is mid-July..

An example of a mixed planting of vegetable crops:

Mixed landings can be different. For example, after harvesting early potatoes, strawberry or strawberry rosettes can be rooted in the beds..

When choosing a scheme for mixed planting of vegetables, you need to consider several points. Fundamental rules: 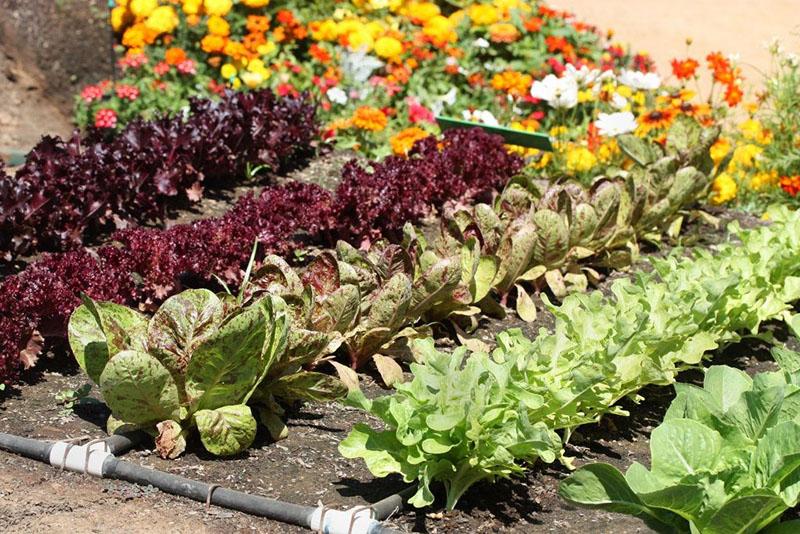 When mixed sequential plantings of vegetables, the ripening period must be taken into account. This enables the early crop field to plant seedlings of another plant in the same soil. In this way, cauliflower with later white cabbage, beets with salad, carrots with parsley are grown..

Potatoes, cucumbers, Chinese cabbage, onions, and Swiss chard have an early ripening period. They can be alternated with later beets, pumpkin, eggplant, tomatoes. 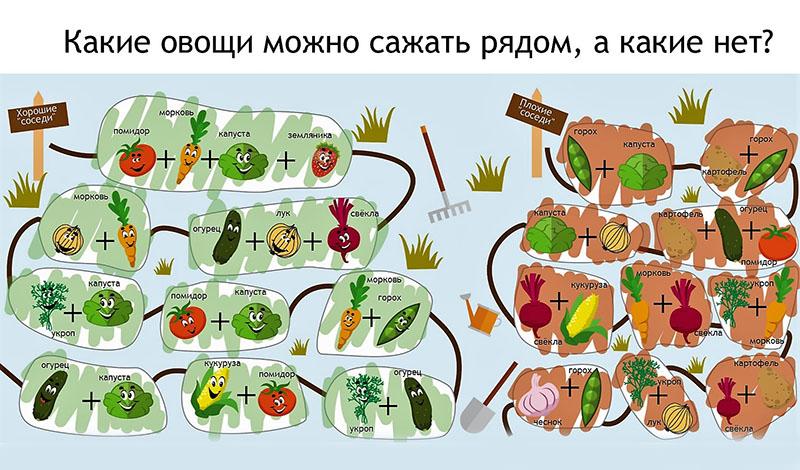 Mixed planting of vegetables does not cause difficulties for summer residents and gardeners. Given the compatibility of various vegetable crops, you can maximize the use of fertile soil resources, increase plant productivity and improve cultural diversity in the garden.

We do mixed planting of vegetables on our site – video