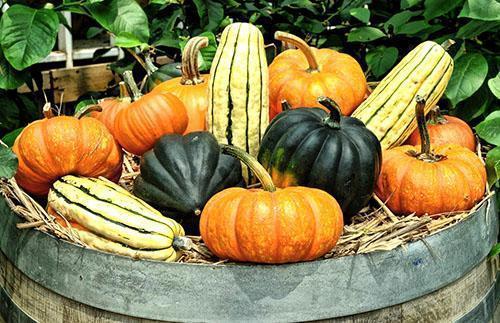 More than twenty varieties of herbaceous annuals have the right to be called a pumpkin, forming powerful bushes or lashes and giving large, hard-barked fruits with flattened seeds in the core..

The fruit of such a plant itself is called pumpkin, and its shape, size, color and properties differ significantly in different varieties and varieties. Most of the naturally occurring genera of pumpkin originated from the countries of America, some are still found only here..

But not many species are used for food around the world. Among them, the more popular in Europe, Asia and Russia is the hard or ordinary variety. Americans are rightfully proud of the fruits of a giant pumpkin reaching several hundred kilograms, and they also enjoy eating the high-sugar, tender pulp of nutmeg pumpkin. This species in many countries is highly valued for its nutritional and dietary properties, but it is extremely demanding on heat..

In addition to table varieties of pumpkin, delighting gardeners with hundreds of varieties of different ripening periods, shapes and sizes, man grows fodder and ornamental plants belonging to the pumpkin family.

In order to get decent harvests from their beds and regularly, even in winter, include healthy pulp in the diet, it is useful to study pumpkin varieties, their descriptions and photos from autumn, to choose a planting site, taking into account crop rotation.

Ordinary hard-bore pumpkins are early ripening, unpretentious and high-yielding. Pumpkin varieties are especially popular among the bred varieties, which yield medium-sized fruits, which allows you to quickly and without loss use the pumpkin. Since pumpkin is cultivated because of the sweet dense pulp, the thickness of this layer, as well as the content of nutrients in it, is of great importance. Read the benefits of raw pumpkin. 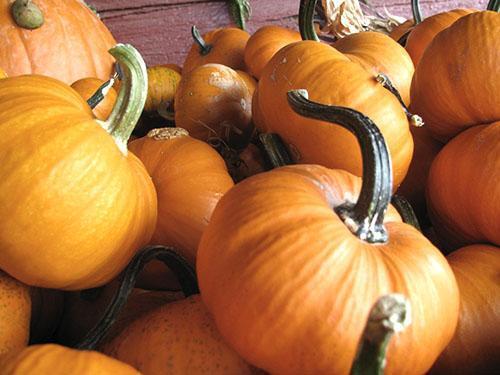 Pumpkin of this variety, which ripens in 100-110 days from the emergence of sprouts, is a mid-season pumpkin. Slightly flattened fruits, weighing from 2 to 3 kg, have a bright orange bark and the same pulp, which contains a record high amount of valuable carotene. The variety is cold-resistant, unpretentious and regularly supplies the gardener with vitamin-rich portioned fruits of high commercial quality. 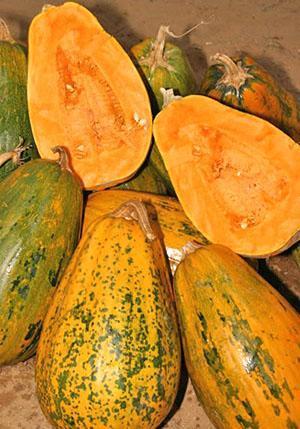 This variety belongs to the oldest and most famous among gardeners in Russia. The fruits of the Gribovskaya bush pumpkin grow up to 2.2–5 kg, have an obovate, oblong shape. The bark of pumpkins is smooth or slightly ribbed, the color changes from green to light orange as it ripens, but speckled wide dark green stripes sometimes remain on mature fruits. According to the photo and description, the early ripening pumpkin variety has a dense orange flesh of good taste..

In the West, where pumpkins are extremely revered, and gardeners have more than a dozen varieties of excellent shape and size, such a pumpkin is called a delicacy. Indeed, an early hybrid of a hard-bore pumpkin, ripening in 95-105 days, is distinguished by a dense pulp with a high sugar content and excellent taste.. 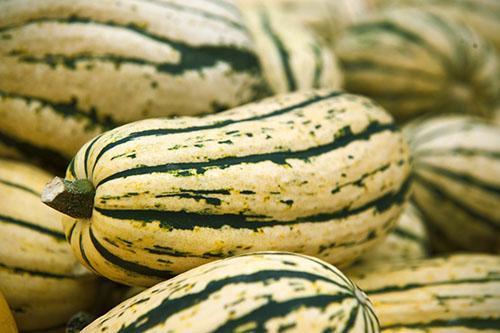 The fruits of this pumpkin variety have an oblong ribbed-cylindrical shape, white with bright green and orange stripes. Due to the elegant appearance of pumpkins, reaching a weight of 1–1.5 kg, the plant can be grown as a decorative pumpkin, and, as in the photo, bring fruits useful for dietary and baby food.

From one strong plant, you can get up to 12 kg of pumpkins, which are stored for a long time without losing their properties. The fruits are consumed after cooking and raw.

Pumpkin of the Healing variety 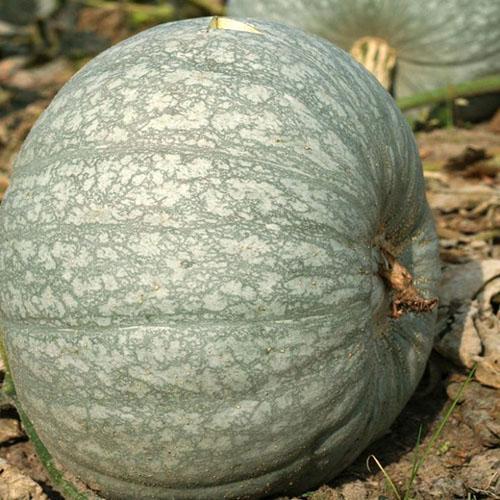 With its gray, darker mesh bark and sweet crunchy orange flesh, this pumpkin got its name for a reason. In the fruits of the pumpkin variety shown in the photo, according to the description, there is a lot of vitamin E, B1 and B2, carotene, sugar fiber. Pumpkin, ready for harvesting 95-110 days after the emergence of sprouts, is not afraid of moderate frosts, is well stored in winter and can be used both in culinary dishes and on its own raw.

The fruit is round or flattened, the surface is slightly segmented, smooth. By the time of harvest, the pumpkin gains weight from 3 to 5 kg, while a crop of up to 15 kg is obtained from one bush.

Small, weighing up to 2.5 kg, pumpkin fruits, as in the photo, are decorative, since they have a bright color and several pieces ripen on lashes at once. The rind of this delicious variety is orange-red, with vague dark green stripes and spots..

The pulp is dense, crunchy, containing up to 8% sugar, a lot of ascorbic acid and carotene. The variety for table purposes has an average ripening period. The fruits are recommended to be used for the preparation of side dishes, various culinary dishes and juices, to be consumed fresh, as well as the pumpkin is successfully dried.. 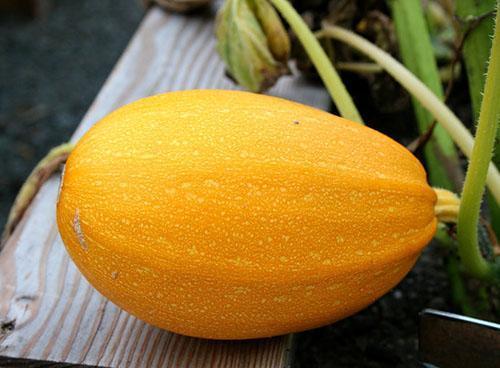 One of the earliest varieties of pumpkin, as in the photo and in the description, already in 65–80 days forms oblong oval fruits with a hard smooth bark of a yellow or light cream shade. The weight of pumpkins does not exceed 1–1.2 kg, which is convenient for using fruits. 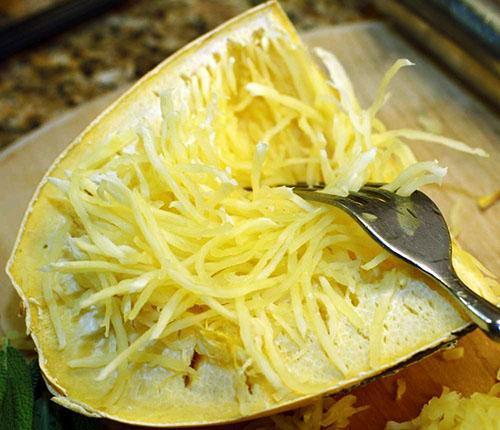 The main “attraction” of the variety is the unusual structure of fragrant juicy pulp with pronounced fibers. Fiberness increases with heat treatment, be it boiling or baking. The result is the formation of long, thin spaghetti-like fibers. Pumpkins of this variety are unpretentious, cold-resistant and tolerate dry periods well. Although the sugar content of the fruit is low, there is a lot of carotene in the pulp, which is important for dietary nutrition.. 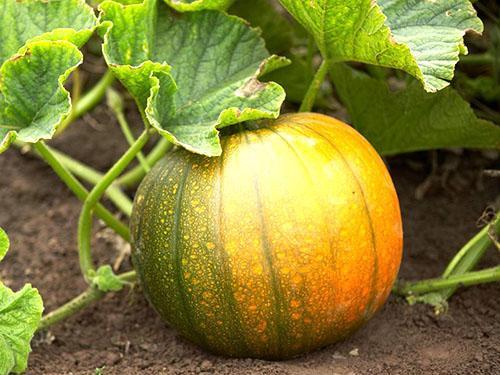 This fruitful universal variety, which yields a harvest in 95–105 days and is suitable for winter storage, is well known to gardeners throughout the country. Pumpkin Orange Kustovaya obtained by Kuban breeders and employees of the All-Union Research Institute of Plant Industry named after I. Vavilov. On compact bushes, round or slightly cylindrical fruits weighing up to 5 kg are formed. The bark of pumpkins is thin, almost without a pattern, leathery to the touch. The yellow, juicy pulp of this pumpkin variety is suitable for any processing, drying and preparation of puree and juice. 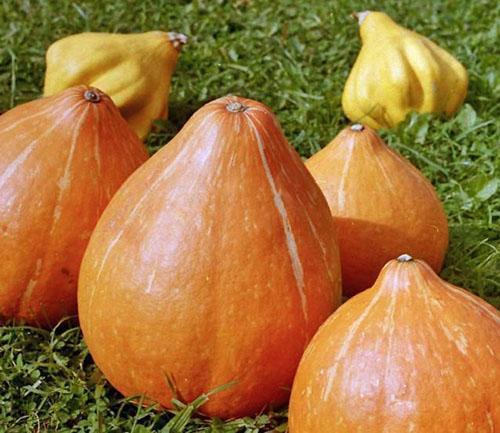 The pumpkin variety Rossiyanka will help gardeners to get a harvest in 85–95 days. At the same time, small, portioned fruits of this type, gaining weight from 1.5 to 5 kg, are distinguished by high dietary qualities, are well transported and stored..

At the same time, on several lashes of a plant, 8 smooth decorative, as in the photo, pumpkins with an orange soft bark and a bright fleshy inner part can ripen. When ripe, the pulp is crumbly, aromatic, very sweet. Due to the large thickness of the juicy layer inside the fruit, there are few seeds, but sugar is up to 4.5% of the total mass. 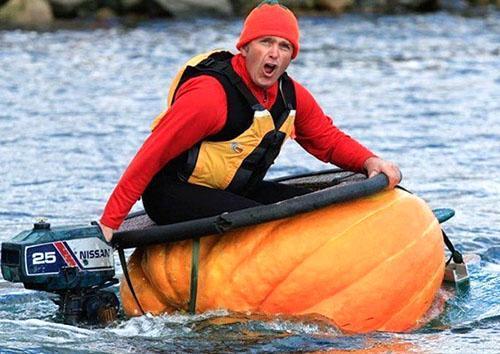 If carriages, like Cinderella’s, are not made of pumpkins now, then pumpkin regattas on huge orange fruits are still held today not in a fairy tale, but in reality in the USA. Giant large-fruited pumpkins weighing several hundred kilograms are especially popular and respected here..

The weight of the world record holder to date is more than 820 kg, but if only a few manage to grow such a pumpkin, then a fruit weighing 50-100 kg, with good care and nutrition, can be obtained in any garden. It is the large orange fruits in the United States and other Western countries that are called pumpkin, and squash is called pumpkins of a different shape and size..