Gooseberry propagation in the country 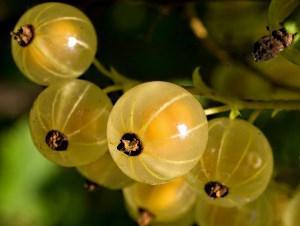 You managed to get an excellent gooseberry bush. It has already begun to bear fruit and has grown well. Now is the time to think about its reproduction. From 5 or more bushes, the yield will increase significantly. Enough for the kids to enjoy the taste of fresh fruits and cook amazingly delicious marmalade or compote for the winter. You can also buy gooseberries, but a self-grown seedling from an already tested healthy bush is much better. What methods of propagation of gooseberries can be used, we will tell you in our article.

Division of an adult bush 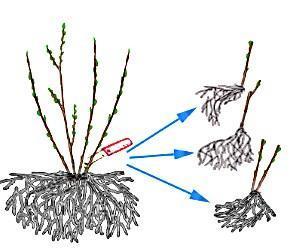 Many summer residents are interested in how to propagate gooseberries in autumn or spring, so as not to damage an adult bush and get new young plants?

The gooseberry has an excellent ability to form additional roots in the areas of shoot growth. Gardeners successfully use this excellent property to get new bushes. In the fall after the leaves have fallen or in the spring before the growing season, the bush can be divided. An adult large plant is dug up and carefully divided into small bushes..

Bushes under 5 years old are suitable for dividing. Each separated part must have a young shoot and roots..

The resulting seedlings are immediately planted in the garden. For the active development of new shoots in the spring, the plant is cut almost to the ground. If you make such a pruning of the bush, in the fall there will be a strong bush with young branches for reproduction..

This method of obtaining new gooseberry bushes has three ways of doing. 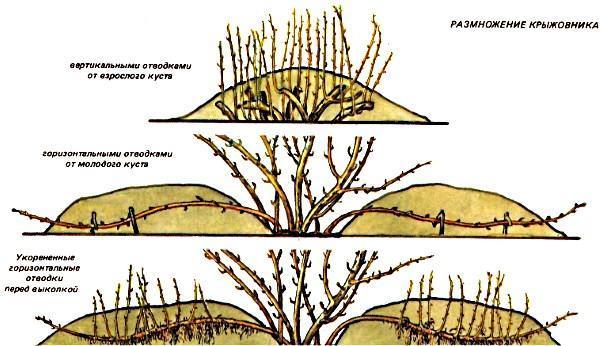 Horizontal layering – one of the easiest ways to propagate gooseberries by layering. Around the bush, opposite to one-year strong shoots, grooves are pulled out with a depth of at least 10 cm. Developed shoots are placed in prepared grooves and pressed with wooden or metal hooks in several places, without falling asleep with earth. After vertical shoots appear, and then grow up to 10 cm, the grooves are covered with a 6 cm layer of humus. After 14 days, hilling is carried out by another 10 cm. In hot weather, moisture is removed by covering with dry grass or leaves. After the foliage has fallen, the branch is cut off from the bush, divided by the number of vertical shoots and transplanted. 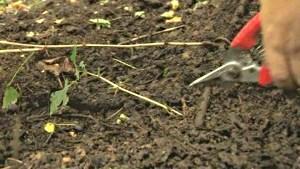 Vertical type layering Gooseberry breeding is great for older plant bushes. In early spring or late autumn, the bush is completely cut off. New shoots will appear in the spring. They are allowed to grow up to 20 cm in height. After that, a bush with new shoots is covered with good soil half the height of the grown branches. During the season, several additional hillocks are made and watered thoroughly. The soil is removed from the bush in the fall. Rooted shoots with their root system are cut and planted in the beds.

To get a young bush with a beautiful crown, pinch the tops of the shoots in the middle of summer.

Arcuate layering, as a breeding method, similar to the method using horizontal bends. The powerful shoot is folded into the groove and pressed with just one hook. Only one additional gooseberry bush can be obtained from each shoot. New bushes are much stronger than with a simple horizontal branch, but in less quantity.

To obtain young gooseberry bushes, green, lignified and combined cuttings are used. Each method has its own advantages and can be effectively used to preserve and reproduce your favorite gooseberry variety..

Green cuttings up to 12 cm long are cut in the period from 1 to 10 July, until they are completely lignified. It is best to use cuttings from the upper branches. For faster formation of the root system, the lower end of the cutting is immersed in a special solution for 3 cm and left for 12 hours. The solution is prepared from 1 liter of water and 150 g of the heteroauxin preparation. While the cuttings are gaining strength for growth, they begin to prepare the substrate from equal parts of sand and peat. This composition of the substrate provides aeration and drainage, perfectly retains moisture.

In order for the cuttings to take root, they are placed in greenhouses or greenhouses made of film. The cut is buried into the soil by 3 cm. The distance between the cuttings is at least 5 cm. The air temperature in the greenhouse in the first 10 days should not be more than 30 degrees with humidity up to 100%. After 10 days, the first feeding with nitroammophos is made at the rate of 30 g per square meter. Gooseberry propagation by cuttings ends in spring, when young plants are planted in the garden so that they grow up and gain strength.

Lignified cuttings are used due to the excellent feature of gooseberries to build up the missing organ on any part of the plant. In early September, cuttings 15 cm long are cut from new shoots and tied with a strip of material in a bundle. Wet sand is poured into the container and the prepared material is buried in it for 30-60 days. During this time, an influx is formed at the cut points – callus. Throughout the winter, the cuttings are stored in basements, covered with pre-moistened sawdust. At the end of April or in the first decade of May, prepared cuttings are planted in beds with a slope. the distance between the seedlings is from 5 to 10 cm.The soil around the cuttings is compacted, it is well watered and sprinkled with sawdust to maintain moisture.

When planting cuttings, 2 buds are left above the soil surface so that the plant quickly forms a bush. 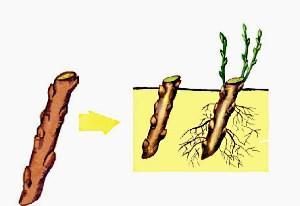 Combined cuttings are green cuttings with small pieces of old wood. Gooseberry propagation begins after new shoots grow by a maximum of 10 cm. They are cut off, capturing 2-3 cm of last year’s wood. The prepared material is placed in water. Further planting and cultivation goes according to the method of green cuttings. 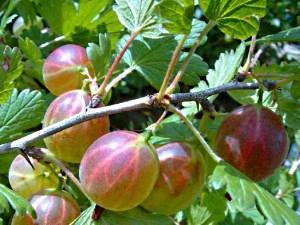 One of the easiest ways to plant gooseberries is to use the branches after spring pruning. For this, three-year-old branches are best suited, on which half of the young growth is cut off. The prepared material is placed in the grooves, leaving a one-year increment at the top. Fall asleep with fertile soil, watering abundantly. When the first signs of growth appear, top dressing is done with nitroammophos..

We told you how to propagate gooseberries in various ways in summer cottages while preserving the taste of the variety you like. There is also a method of reproduction by grafting, but it is more complicated. This breeding method is not suitable for all summer residents and requires more skill..