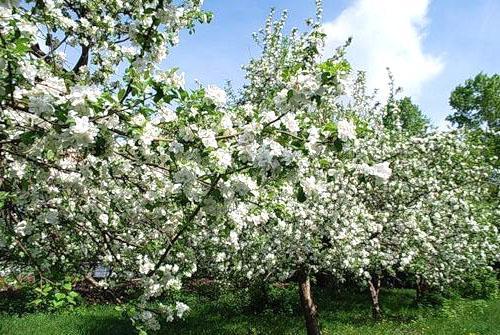 On the territory of the Russian Federation, there are a large number of different types and varieties of apple trees. This is the main problem. Since it is sometimes difficult to choose something suitable. The gardener is simply lost amid the abundance of such choices. Before dwelling on any variety, it is imperative to study the popular varieties of apple trees from a photo with a name and description. 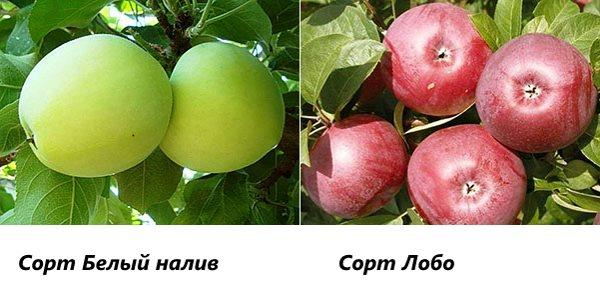 Certain varieties of apple trees are especially popular. Sometimes they even appear in various kinds of films and performances. The reason for this is a large number of very different advantages. Just such an apple tree – “White filling”, which is widely represented on the Internet in numerous photos with a description. The main feature of the variety is the appearance of its fruits. Ripe apples are white in color, but at the same time they have excellent taste. The fruits are very large, in some cases their size reaches 250 grams. The apple tree “White filling” is also sometimes called “papirovka”. This variety does not have an author, many call it folk.

The Lobo apple tree is also no less popular. It differs from other similar varieties in its very bright bluish-reddish color. The apple tree is extremely hardy, which is the most important advantage. The presented variety was bred on another continent, in Canada, by simple pollination. The yield of “Lobo” is very high, therefore it is often called a commercial variety. An apple tree of this type has become more widespread throughout Russia..

The disadvantages include weak resistance to most diseases. This is especially true for scab and powdery mildew. Lobo apple-trees retain their taste after harvesting rather poorly.

Variety “Kitayka” and “Glory to the winners” 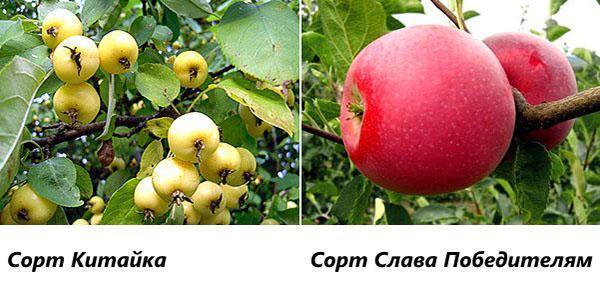 Quite a peculiar sort of apple tree – “Kitayka”. The tree got such an unusual name because of the shape of its leaves – they resemble Chinese plum. The main distinguishing feature of this apple variety is the extremely small size of the apples. Upon reaching full ripeness, they become quite tasty. Many summer residents make delicious aromatic jam from these fruits..

The main advantages of the “Kitayka” variety are the following:

It is precisely because of its unique resistance to frost that “Kitayka” has become often used by gardeners as a rootstock, as a basis for breeding new varieties of apple trees. The color of the fruits of this tree can be different: red, yellow, green.

In most cases, the “Kitayka” apple tree itself is relatively small. Its crown is large enough, pyramidal in shape. The shoots are of medium thickness, their color is brown-olive. At the same time, the ripeness of the fruits comes very early by the standards of the middle zone of the Russian Federation – approximately in the middle and end of August. At the onset of this month, you can start eating the fruits. To the soil “Kitayka” is not particularly demanding, but the best yield indicators for her when planting in loamy soil.

Apple tree “Glory to the winners” is also one of the most popular varieties today. This variety is a hybrid of two other apple trees: “White filling” and “Mekintosh”. When crossed, the resulting variety inherited the best qualities from the two varieties. The main feature is the extremely large fruits, their weight can reach 250 grams or more..

The tree of the variety in question itself has very impressive overall dimensions, sometimes the height of the trunk of an adult tree reaches 4-5 m. In youth, the crown has a pyramidal shape, later it acquires a highly circular or highly oval shape. The variety “Glory to the winners” is rather undemanding to the quality of the soil. Moreover, the first fruits ripen in mid or late August. The variety is self-fertile, therefore it is necessary to use pollinators (“Melba”, “Borovinka” and others). The first few years the tree bears fruit annually, in the future this moment depends on the state of the agricultural fund. 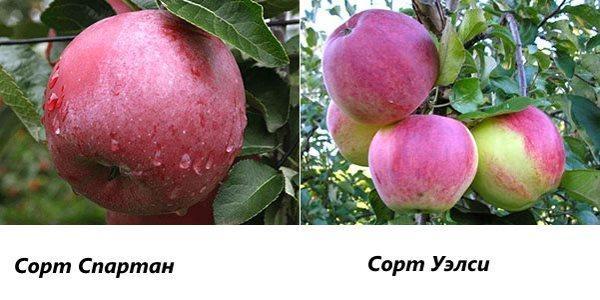 The apple variety “Spartan” was obtained for the first time almost a hundred years ago – back in 1926 by crossing “Mekintosh” and “Yellow Newtown”. The Spartan tree is relatively small, but even a young tree is represented by an impressive trunk. Ripe fruits are round-conical or simply round. Apples are light yellow. A special feature is that already ripe fruits are very firmly adhered to the branches and do not crumble. The branches strewn with fruits bend very strongly, almost sweeping the ground. A caring owner makes props to preserve the tree and the crop..

A negative feature of the variety is its very poor frost resistance. Even at low low temperatures, branches often freeze over.

The older the tree becomes, the smaller the size of the fruits that ripen on it. You can deal with this by the banal pruning of new shoots. The smaller the crown of the tree, the more apples can be harvested in one harvest..

The “Welsey” apple variety is one of the oldest today, it was bred back in 1860, in the USA. Moreover, a Siberian cherry apple tree served as the basis for inoculation. That is why the presented variety takes root well throughout the territory of Russia, since in fact it is his homeland. The size of the tree itself is not very large, the shape of the crown is pyramidal. Ripening of fruits is rather late – winter or autumn. Apples for a very long time can lie in the cellar, pantry and retain their taste for a fairly long period of time. The variety itself is extremely frost-resistant, it perfectly tolerates even very low temperatures (up to -300C). 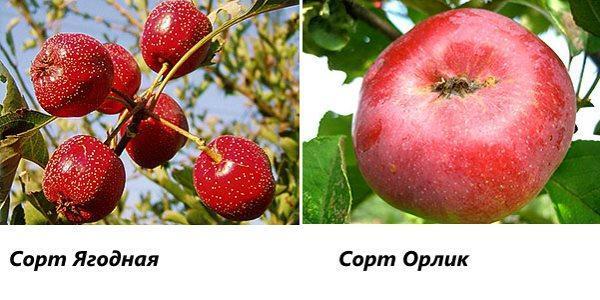 Apple tree “Berry” is one of the smallest species of all existing today. Visually, the fruits of the tree are very similar to apples from “Kitayka”. The diameter of the fruit of the “Berry” apple is only 1 cm. The most important advantages of this variety include the following:

In most cases, the “Berry” apple tree is used as a rootstock when creating all kinds of hybrid trees..

Apple tree “Orlik” was bred in Russia by the method of hybridization back in 1958. The size of the tree trunk is small, the crown has an even rounded shape. Most of the branches extend from the trunk at right angles and are directed upwards. The fruits of this variety are yellowish-green in color at the time of harvest. Fruit ripening occurs quite late. In central Russia – approximately in the middle and end of September. 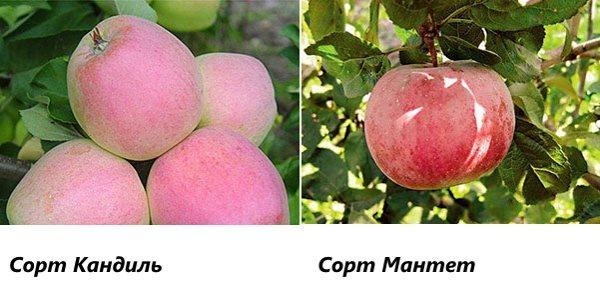 Apple tree “Kandil Orlovsky” boasts fruits weighing 120-150 grams, which have a peculiar elongated-conical shape. Even the most sophisticated gourmets will be able to appreciate the taste qualities of apples – the juicy sweet taste of large fruits will appeal to anyone. The important advantages of the Kandil Orlovsky apple variety include the following:

The fruits become fully ripe only in mid-September. At the same time, you can start removing them. In the future, they retain all their taste and other qualities until mid-February, which is a real record among similar varieties..

The Mantet apple tree, like the Kandil Orlovsky, boasts excellent taste characteristics of its fruits. They ripen very early, which is well appreciated by gardeners. The fruits of an unusual taste are enjoyed by both children and adults. But there is one very important drawback – the shelf life is only 15 days. After that, apples lose their consumer qualities and start to deteriorate. Also, the variety is extremely susceptible to diseases of all kinds..

Today there are a very large number of different types of apple trees. The choice is so great that even the most picky gardener will be able to choose something to his liking..