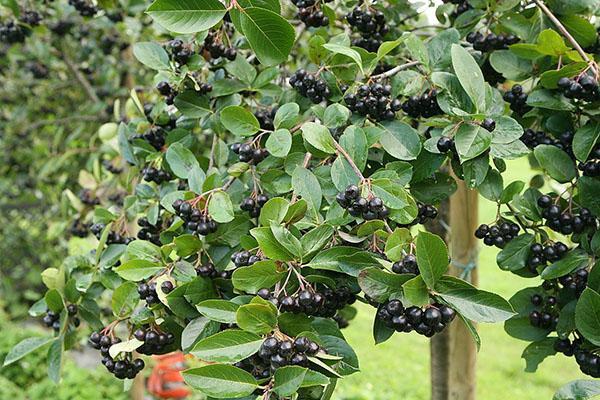 Chokeberry or black chokeberry is a well-known plant in many parts of Russia and abroad. An unpretentious shrub is used not only for harvesting healthy and tasty fruits, but also for landscaping. By the fall, green foliage in summer is colored with all shades of yellow, golden, red, in the form of single plantings or a living wall, magnificently decorating the site. 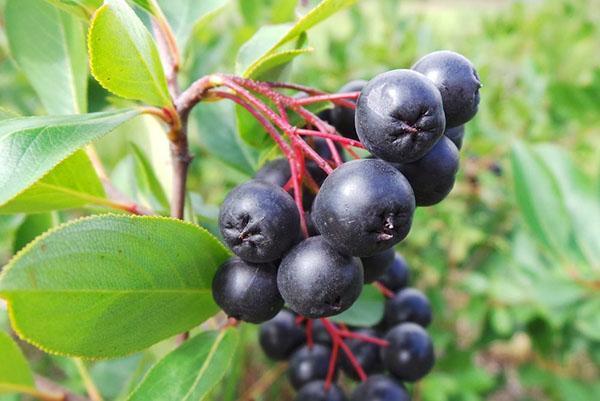 A perennial deciduous shrub native to the North American continent, having moved to Europe and to the territory of Russia, it turned out to be very tenacious, picky and quickly spread as an ornamental or wild growing culture.

Thanks to the breeding work of I.V. Michurin and his associates, who received large-fruited varieties of chokeberry, she attracted the attention of domestic gardeners.

According to the description, black chokeberry in nature has a height of 2 to 3 meters. At first, the crown of the shrub is quite compact, but as it grows, it becomes more and more branched, spreading, wide. The diameter of an adult bush reaches two meters, so gardeners practice annual pruning and plant formation. It is easy to distinguish perennial shoots from new growth by the color of the bark..

The older the branch, the more gray its surface becomes. The bark of one- or two-year-old wood has a reddish or brownish-brown hue.

Although the crop is often called black chokeberry, the plants are not closely related. This is clearly visible if you look at the chokeberry foliage. Unlike dissected rowan leaves, here leaf plates 5–8 cm long are oval or obovate, simple. They have a smooth front and pubescent dorsum and a scalloped edge. The petiole is short, dense.

When in autumn the leaves of a shrub change color from dark green to yellow and purple, the appearance of the plant changes. Against such a bright background, brushes of ripe fruits, purple with a bluish tint, look incredibly beautiful. 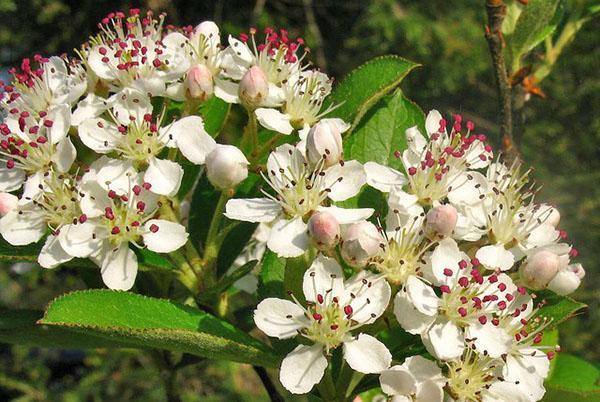 The flowering of black chokeberry begins in the second half of May and lasts until the first days of summer, then green ovaries appear in place of white or light pink flowers, collected in corymbose inflorescences. Almost black fruits ripen in early autumn and can remain on the branches without loss of quality until mid-October. Unharvested crops are readily pecked by birds. 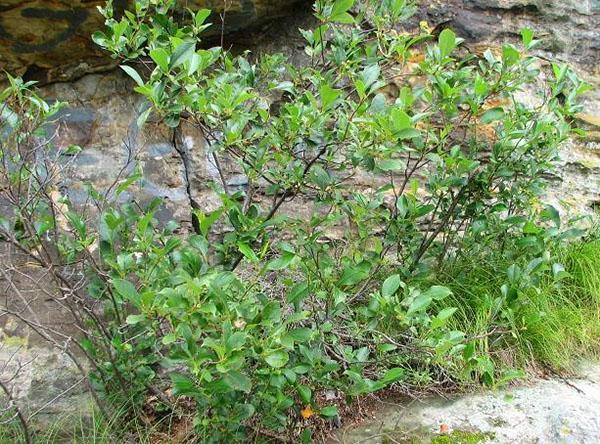 As with all fruit shrubs, there are two planting dates for chokeberry. In the fall, seedlings are transferred to the ground from mid-September to November. In spring, the shrub is most often planted in April, when the growing season begins, but the leaf buds have not yet awakened..

When planting chokeberry, the climatic features of the region must be taken into account. It is important that the seedling has time to acclimatize before the onset of autumn cold weather, and in the spring it does not fall under frost that is destructive for the awakening crown..

The crop is undemanding and can grow in a variety of soil types, including nutrient-poor sandy soils. The root system is located at a depth of no more than 60 cm, therefore, chokeberry is not afraid of closely lying groundwater and spring flooding due to rapidly melting snow. At such a depth, the soil does not remain excessively moistened for long, and the roots do not have time to rot.

Best of all, the plant takes root on loose fertile soils that easily accept and give up moisture. In this case, the landing site should be located in the sun on the side protected from the cold wind. This will help the seedling to take root and grow quickly.. 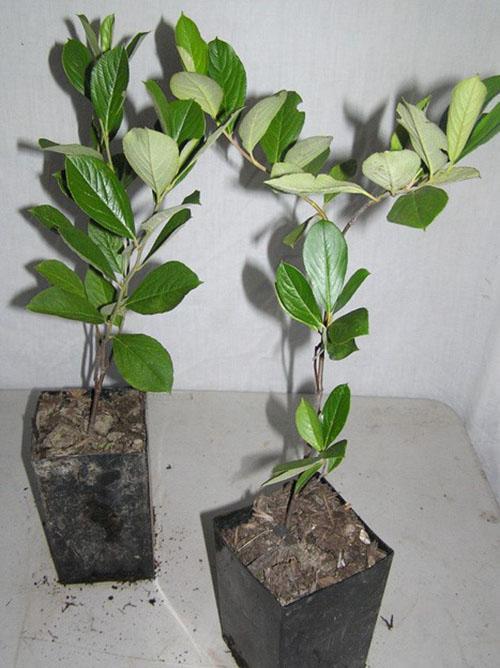 Planting pits are prepared in advance so that the root system of the seedling will comfortably fit in it. On average, the depth and width of the future habitat of a plant is a wound of 50-60 cm. If you have to plant several bushes at once, take into account their growth and adhere to an interval of 3 meters for full development and lighting of the crown.

The soil removed from the pit is mixed:

A third of the planting hole is filled with soil, well spilled with settled water and waiting for the moisture to completely go deep. Now it’s time to plant chokeberry. The seedling is immersed in a hole so that the root collar is a couple of centimeters above the ground level, covered with a prepared substrate, compacted and watered again so that the shrub settles well on the ground. The trunk circle, in order to avoid rapid drying of the earth and the formation of a crust, is mulched abundantly.

In order for black chokeberry to take root faster, experienced gardeners advise, before planting chokeberry, to shorten the shoots on the seedling, leaving no more than 5-6 viable buds. 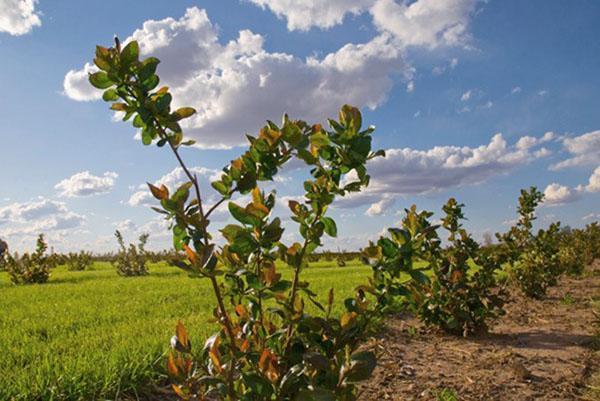 It is very easy to care for frost and drought-resistant shrubs. Aronia needs regular pruning of the crown, triple feeding, removal of weeds, preventive treatment against pests and infrequent but abundant watering.

Plant pruning is carried out:

In addition to carefully cutting dry, damaged and weak branches, shoots are removed that interfere with the penetration of light and pollinator insects into the crown. Chokeberry painlessly tolerates formative pruning, therefore it can be grown in the form of a miniature tree. To do this, at the soil level, remove all shoots, except for the strongest, and then gradually form a trunk from it. To do this, for several years, only a few apical buds are left on the chokeberry stem, when the plant reaches the desired height, the growth point is removed and they begin to create a compact crown at the top of the stem. 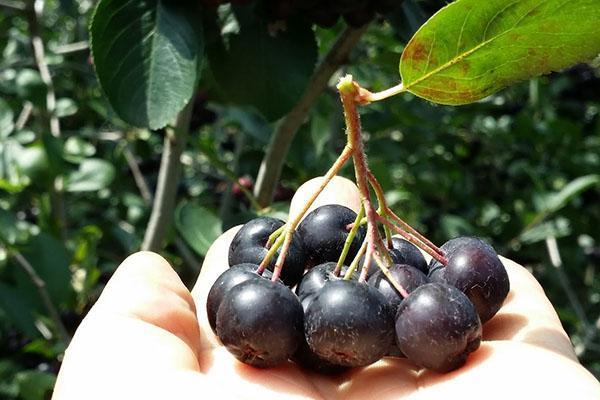 nitrogen fertilizers. Re-fertilization should be carried out after flowering, when the ovary begins to fill, one more top dressing should prepare the plant for winter. It is carried out at the end of summer without the use of nitrogen..

Although chokeberry can survive for a long time in drought conditions, it needs water to get an excellent yield and beauty. Watering is important: 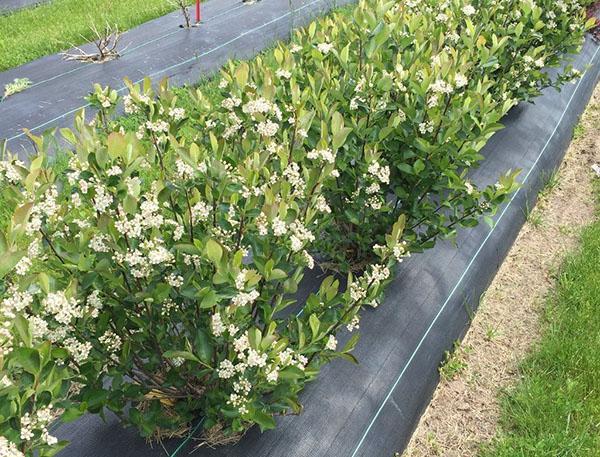 Each bush should receive at least 20-40 liters of water once. For the greatest efficiency of the surface root system, watering is carried out at a distance of 30-40 cm from the center of the bush, in shallow furrows.

The trunk circles are kept clean, for which the soil is regularly loosened or sprinkled with mulch.

Chokeberry pruning and propagation by cuttings 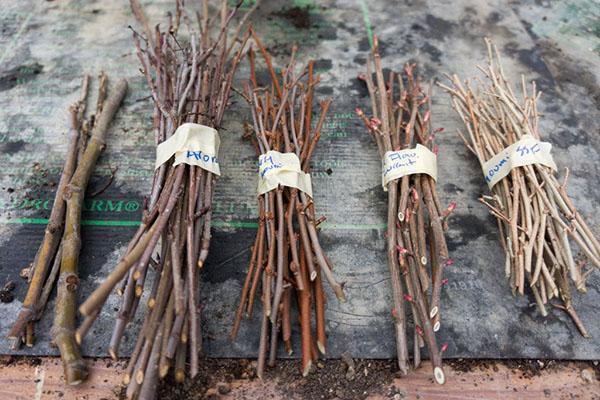 Chokeberry pruning begins from the first year of life. The beginnings form a crown of 10–12 silt branches, then, as they age, they are gradually replaced with new shoots. Rejuvenation begins at the age of 8.

If the bush is neglected and loses its strength, there is no need to rush to uproot it. It is enough to cut off the entire crown at the root in the fall in order to wait for a strong young growth in the spring. From it in the fall they form the backbone of a new shrub.

Strong, healthy branches that need to be shortened or cut can be used for excellent planting material and for propagation of chokeberry by cuttings.

For green cuttings, take non-lignified tops or middle parts with 5-6 living buds. All the leaves, the roof of the upper pair, are cut off, and the remaining ones are shortened. Rooting is carried out in a greenhouse, in a light sandy substrate, having previously treated the cuttings with a growth stimulant. A year later, a full-fledged chokeberry seedling is formed from a small piece of a branch for planting in the ground.

Lignified cuttings are pieces of mature, one-year-old shoots with several healthy buds. They are cut in the fall and rooted in the school so that when planting, only two buds remain above the soil surface..

If there is an adult chokeberry bush on the site, it can be propagated: 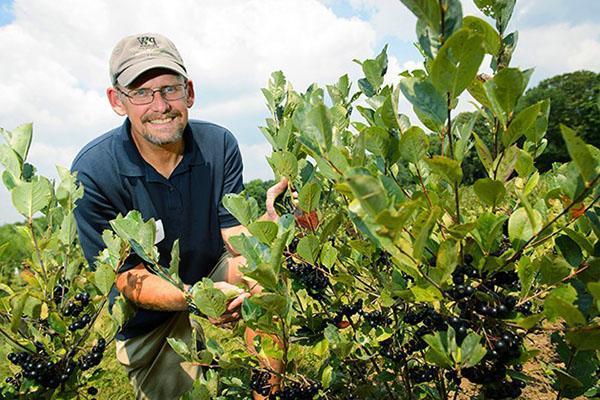 Young plants quickly take root, only in the first years of life do they need shelter for the winter and after a couple of years they are ready to please the gardener with ripe bluish-purple or almost black hearths.