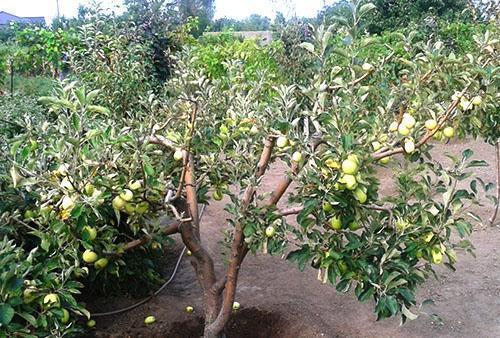 Abundant spring flowering and apple fruit ovary delights every gardener. But often, the closer it comes to harvesting, the less beautiful liquid fruits remain on the branches, and the tree itself takes on a sick appearance. A large number of diseases and pests interfere with the normal fruiting and ripening of fruits. You can get a healthy harvest only with proper care and timely plant protection..

Photo of pests of apple trees and the fight against them

A huge number of insects love to feast on the flowers, fruits and leaves of this tree. If you detect and correctly determine the type of pest in time, then the fight against it will not be as terrible as it is portrayed. Among the most dangerous pests for the garden, several types of aphids, ticks, moths and moths can be distinguished. The fight against each of them occurs from the beginning of budding to the ripening of fruits..

How to defeat a moth 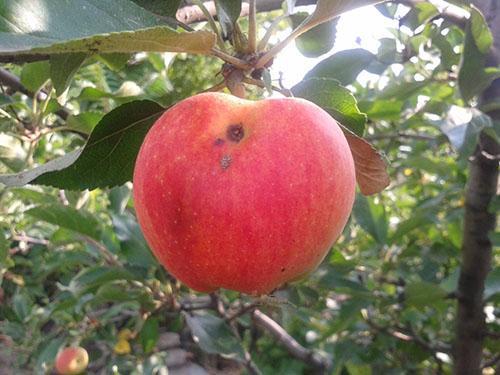 This type of pest is considered the most dangerous for the crop. The moth lives in almost all regions of the country. A small butterfly with dark transverse wavy lines begins its years with the flowering period of the apple tree. The females lay their eggs on the smooth surface of young leaves or just the formed ligature. Through the petiole fossa, caterpillars penetrate into fruits and begin to develop in them (they reach up to 20 mm). Crawling from one fruit to another, each individual is capable of causing serious damage to the crop. And when an unripe, spoiled apple falls off, the caterpillar leaves it and makes a long way along the trunk to a new fruit. The pest hibernates in warm cocoons under the bark of damaged areas. 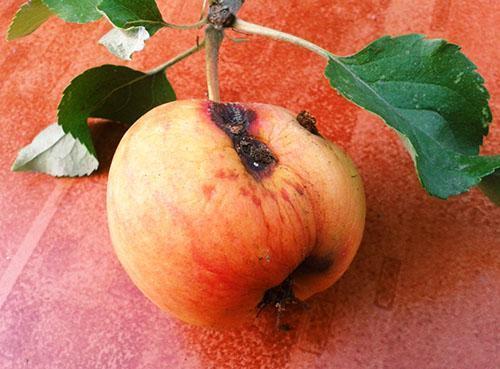 The methods of dealing with the moth on an apple tree are quite diverse, and this whole process continues throughout the year:

If you miss the spraying time and allow the penetration of the caterpillars into the fruits, then any further chemical or biological treatment will be meaningless. She will do more harm than good.

How to deal with aphids on an apple tree? 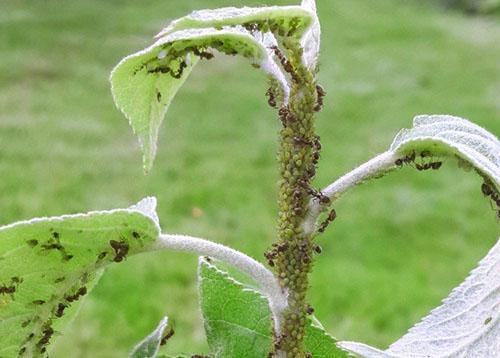 This pest sucks out juices from young leaves and shoots, as a result of which they bend, slow down in growth and dry out completely. Small insects of yellowish-green color, 1 – 3 mm in size, climb to the tops of the buds in the spring, and after they bloom, they penetrate inside, which greatly complicates the destruction of aphids.

Some predators (“ladybug”, fly larvae or goosebumps) eat apple green aphids. Therefore, sometimes the beneficial insects present on the site are enough to fight the pest. Otherwise, trees will need to be sprayed with various preparations. Spring treatment with 2% nitrafen emulsion (200 g of concentrate per 10 l of water) or phosphamide (10-15 g / 10 l of water) will help to exterminate the overwintering eggs of aphids.

The greatest concentration and activity of insects is usually observed at the beginning of summer. The following tips will tell you how to deal with aphids on an apple tree in June. When a large number of pests appear, only spraying the crown will be effective. A good insecticidal property is a 12% hexachlorane dust or a 2% aqueous suspension of this drug, as well as a soap solution (200-300 g / 10 l of water), which is used to wash the damaged areas.

Why do the leaves of the apple tree dry? 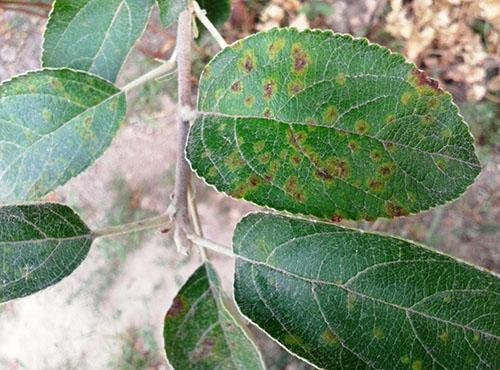 Even the complete elimination of all pests does not guarantee a good healthy harvest. Trees are also susceptible to many diseases, as a result of which their leaves become covered with bloom or spots, and then curl, dry out and fall off. The most common diseases of the apple family are scab, powdery mildew and moniliosis (fruit rot).

Apple scab and methods of its treatment 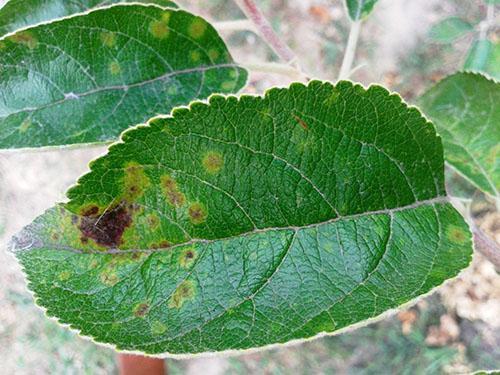 This type of disease is one of the most dangerous for many fruit trees and shrubs. Scab is a spore-bearing fungus that activates and multiplies when exposed to moisture. Initially, brown spots appear on the leaves of the apple tree, and over time, the fungus infects young shoots, flowers and unripe fruits.

The main reason for the appearance of scab on an apple tree is excess moisture in the absence of ventilation in the crown. Therefore, the first preventive action is the spring pruning of excess branches and shoots. To combat scab, treatment with certain drugs should also be carried out:

Topaz and Hom received good reviews from many gardeners today. The first is sprayed before bud break, the second – immediately after flowering. 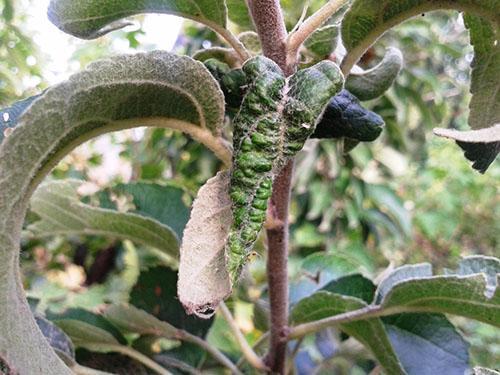 Why leaves curl on an apple tree, not everyone knows. Many gardeners mistakenly associate this with caterpillar activity. In fact, powdery mildew is the main cause of deformation. And caterpillars just populate ready-made “dwellings”. The first signs of the disease are expressed by the appearance of an off-white or gray coating on the leaves. At the initial stage, it is easily erased, but over time it becomes denser. The leaves on the apple tree curl, stop developing, turn yellow and die off.

Spraying with colloidal sulfur will help get rid of apple tree disease. The causative agent of powdery mildew “waits out” the winter in the buds of the tree, so the first treatment is recommended to be carried out simultaneously with their advance. Immediately after flowering, it is necessary to perform a second spraying, and after another two weeks – a third.. 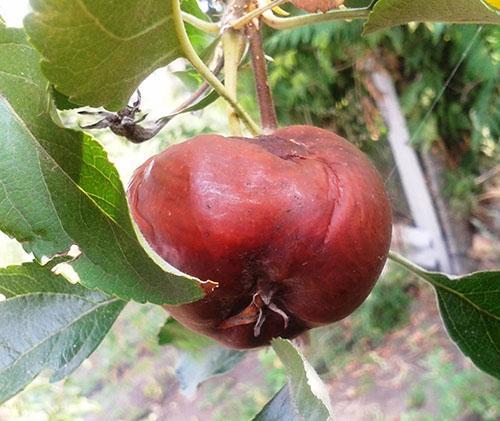 Increased humidity at high air temperatures contribute to the development of infection, in which rotting of fruits is observed directly on the branches. The causative agent of monoliosis is introduced into the fetus through the sites of damage by other diseases or pests. In such places, a small brown spot initially appears, and over time, rot covers the entire fruit. The development of infection will prevent spraying with Bordeaux liquid or a 3% suspension of copper chloride. 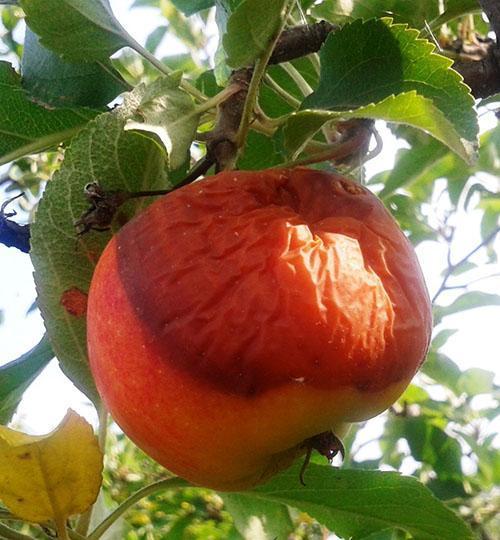 Regardless of the type of damage to the tree, there are a number of recommendations that will help prevent insect populations and the development of any infections:

The use of chemical control agents during fruit ripening is unsafe! 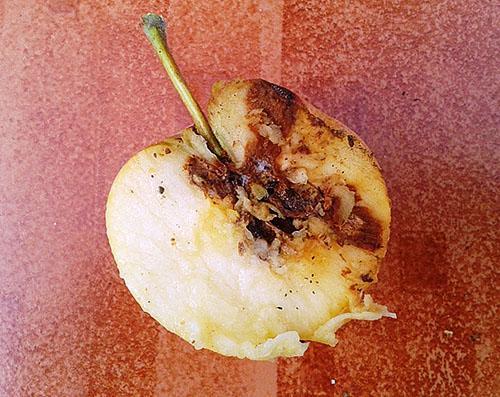 Photos of pests and diseases of the apple tree will help to timely determine the nature and origin of the problem. However, it is better not to wait for its manifestation, but to carry out all preventive actions regularly throughout the year. Indeed, any ailment is much easier to prevent than to unsuccessfully fight it all your life. Read also the article: why the leaves of the apple tree turn yellow in June?