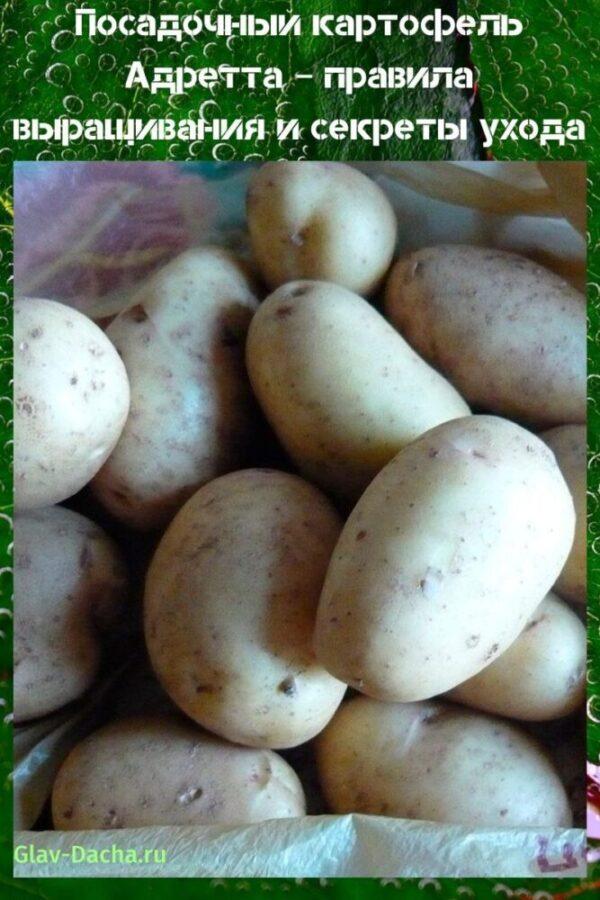 Adrett’s planting potatoes are a German medium early variety, bred in 1977. It has become a real find for gardeners who value unpretentious care, high yield and excellent taste of potato tubers. It is these properties that ensured the Adretta variety wide popularity both among novice gardeners and among large farms.. 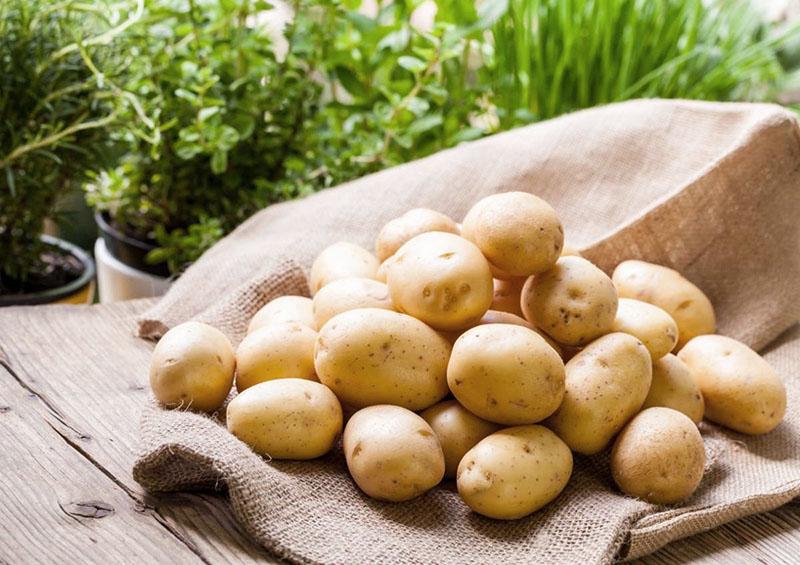 In the 60-70s of the last century, potatoes with yellow pulp were considered fodder and were used exclusively as feed for farm animals. In 1977, German breeders managed to bring out the Adretta planting potato variety, which made a splash with its yellow pulp and excellent taste.. 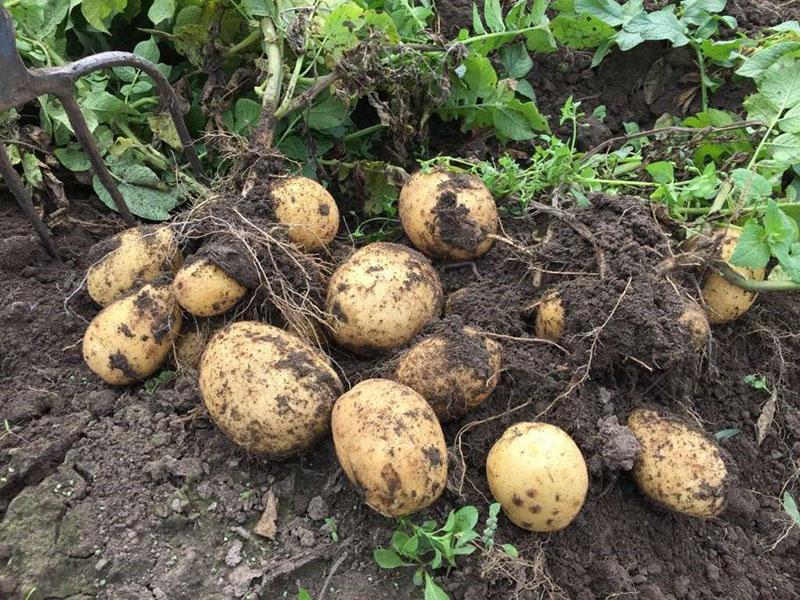 Adretta’s potatoes are distinguished by high yield rates – if all the requirements of agricultural cultivation are met, up to 43-45 tons of crop can be harvested from 1 hectare (50-80 kg per square meter).

The tubers of Adretta potatoes are distinguished by good keeping quality and the ability to preserve marketable and taste qualities during prolonged transportation. 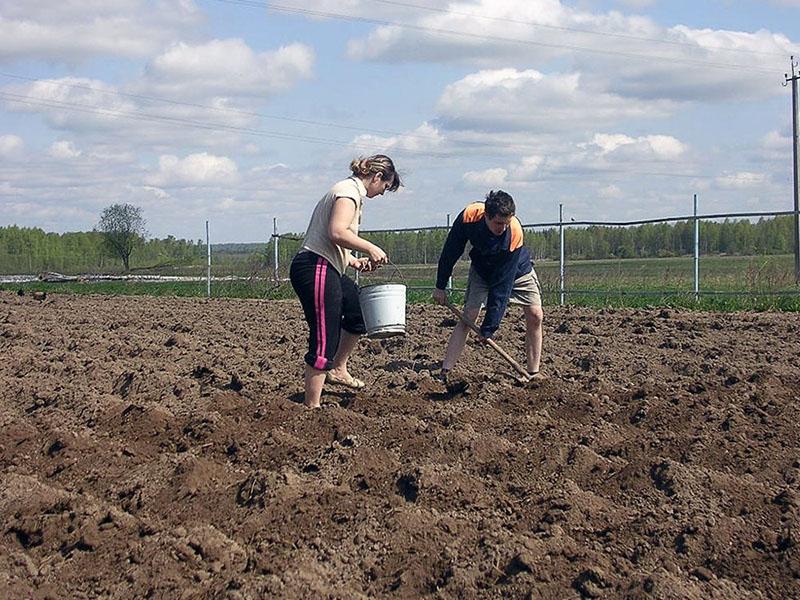 The optimal time for planting Adretta potatoes is the last days of April or the first decade of May, when the soil temperature warms up to + 10 ° C. The culture is best grown on loose loamy or sandy loam soils..

For growing Adretta planting potatoes, black soil or clay soil can also be used – but it must be fed with litter manure containing hay and straw. 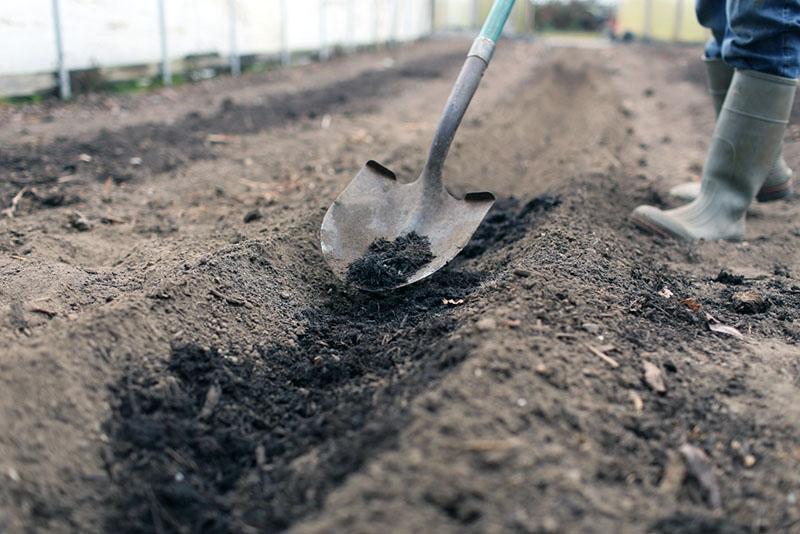 For growing Adretta potatoes, open, evenly lit areas, protected from drafts, are suitable. The beds should not be placed in the shade of trees or buildings – this will lead to the fact that only tops will grow and will negatively affect the size of root crops. 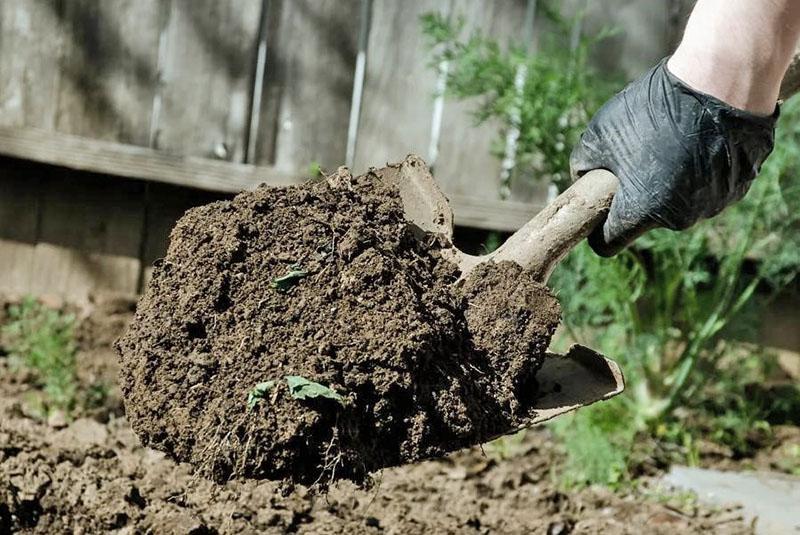 3-4 weeks before planting, you can start germinating seed potatoes. To do this, it must be transferred from the basement or cellar to a lighted place and left for 5-7 days..

For planting, healthy medium-sized tubers are used, without traces of rot and damage. If the fruits are very large, they can be cut in half..

The site for planting potatoes must be prepared in the fall – dug to a depth of 8-12 cm, fertilize with humus. In the spring, 2 weeks before planting, you should re-dig the soil and prepare the holes.

To plant Adretta potatoes, you need to prepare holes – their depth should be about 9-12 cm.A gap of 35-45 cm should be left between the holes, 45-50 cm between the rows for the convenience of hilling and weeding.

After that, water each hole abundantly, and carefully level the soil with a rake. This will prevent rapid evaporation of moisture..

Rules for caring for Adretta potatoes 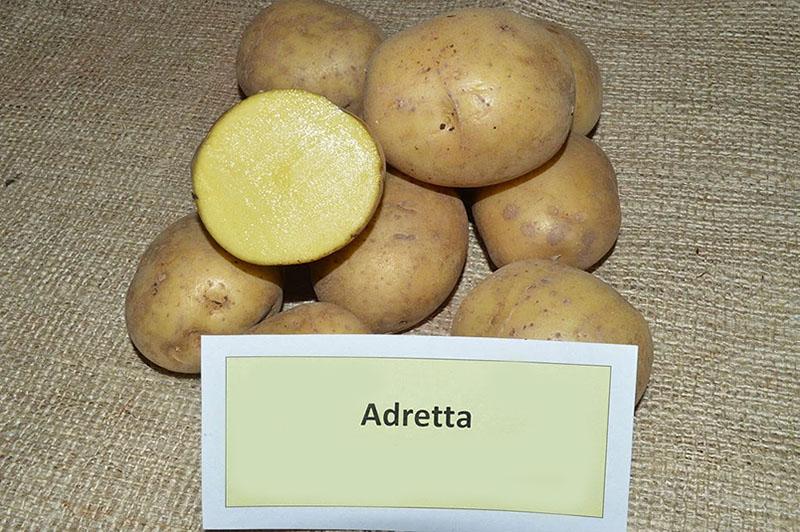 Planting and caring for Adretta potatoes are no different from standard procedures for growing this crop. Timely watering and subcrusting, loosening, weeding, disease and pest control will help to get a good potato harvest. 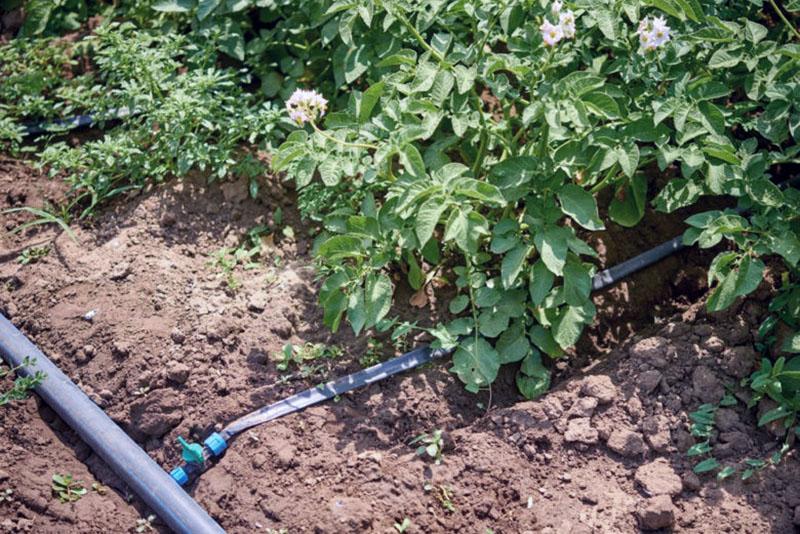 The characteristic of the Adretta potato variety classifies it as a moisture-loving crop. Bushes require regular watering – it is carried out as the top layer of the soil dries up. One plant consumes up to 4 liters of water. You can water potatoes either from a watering can or by sprinkling.

After watering, the soil must be loosened. This will help maintain proper moisture levels and prevent crusty crustiness.. 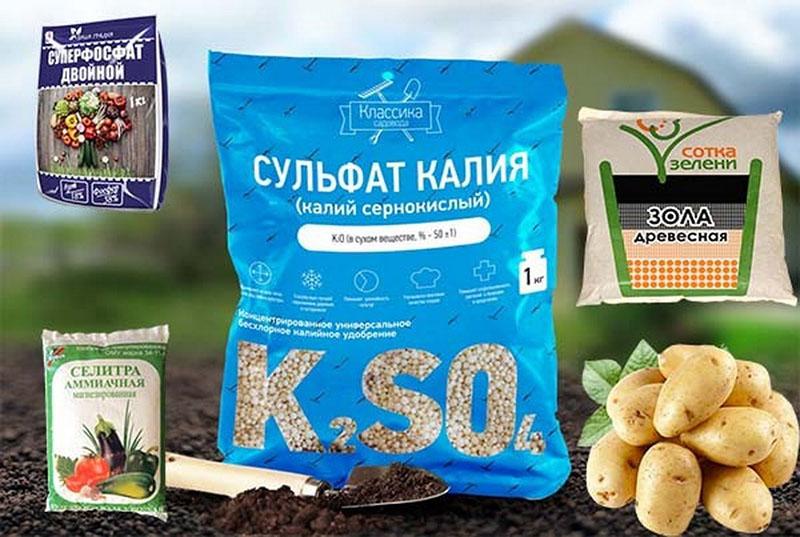 Potatoes of the Adretta variety do not need a lot of nitrogen, so nitrogen-containing fertilizers must be applied very carefully and in minimal proportions. With an excess of nitrogen, potatoes begin to grow green mass.

If the shoots and tops of the plant become weak and lethargic, this indicates a lack of mineral elements. To remedy the situation, urea is introduced – 7 g, diluted in 5 liters of water. You can also use a solution of poultry droppings at the rate of 250 g per 5 liters of water..

Re-feeding is carried out during the formation of buds – for this you need to mix ½ a tablespoon of potassium sulfate and 2 tablespoons of ash per ½ buckets of water. Consumption for each plant is 600 ml of top dressing.

During the flowering period, you can feed the plant a third time – this activates the formation of tubers and has a positive effect on their size. For this purpose, Adrett’s potatoes are sprayed with a superphosphate solution – 50 g per 5 liters of water.

Hilling helps to retain moisture in the soil and improve oxygenation of the plant. Therefore, this procedure is an indispensable part of the care of Adretta potatoes. It is necessary to huddle the beds twice during the growing season. The first time when the sprouts reach 7-10 cm in height and also 20 cm. 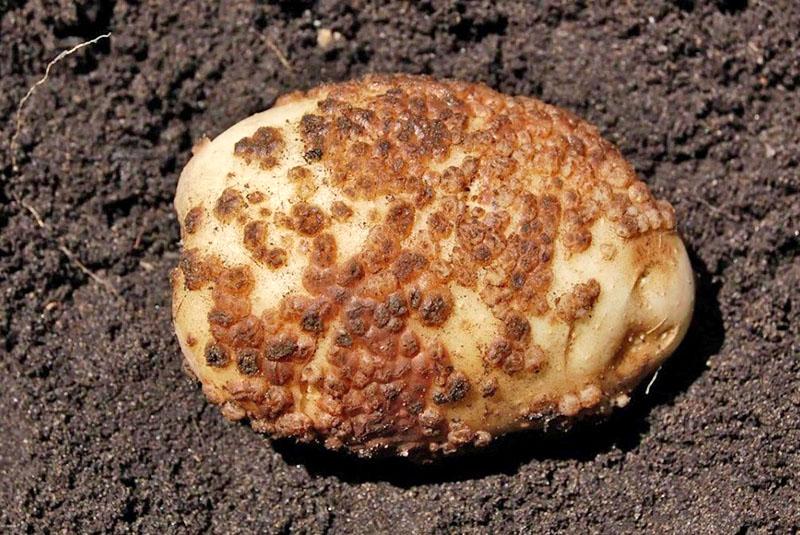 Potatoes of the Adretta variety are resistant to viruses and cancer. However, the variety can be affected by scab, late blight of foliage and tubers, rhizoctonia. 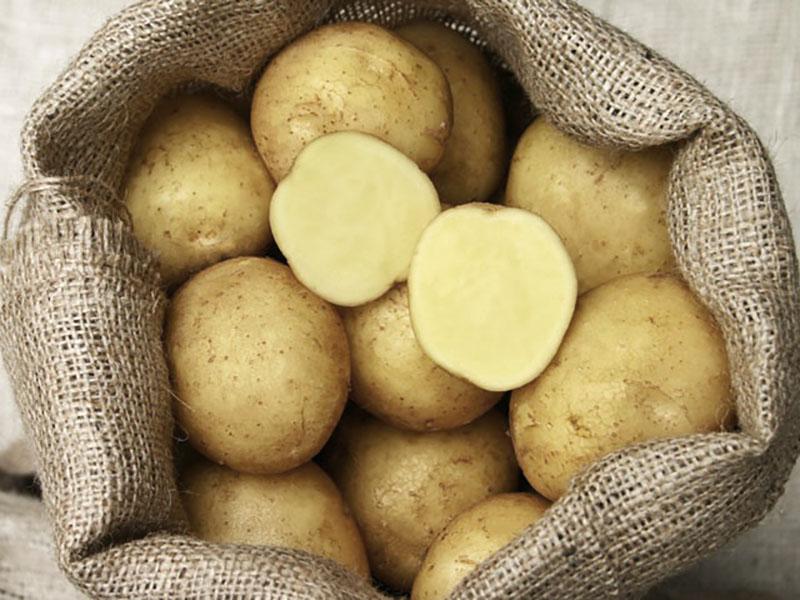 Adrett’s planting potatoes are one of the most popular among Russian gardeners. It has earned its popularity due to its ease of growing and unpretentious care. Possessing good immunity to viruses and cancer, high yield and pleasant taste of potato tubers.

To your attention the planting potatoes of Adretta – video

Garden
Previous Post
Why does your orchid have sluggish leaves? Looking for answers
Next Post
How to use sawdust in your garden and vegetable garden to get a good result