How to treat cherry moniliosis in order to preserve the harvest and the tree? 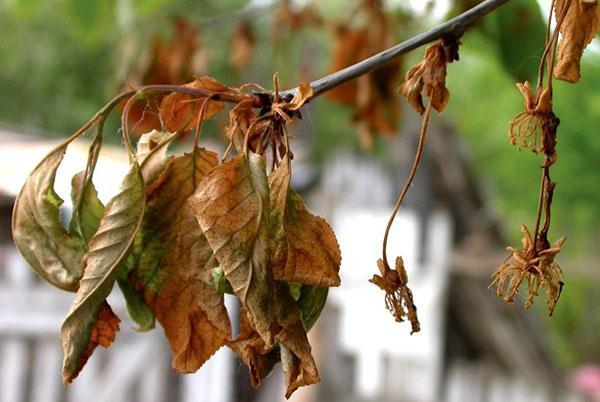 Increasingly, gardeners are faced with the fact that among the spring greenery, brown spots of shoots suddenly dried from a monilial burn appear on cherries. How to defeat cherry moniliosis, how to treat plantings affected by a dangerous disease?

Backyard owners, who have not previously encountered the problem, mistakenly believe that recently faded trees have fallen into a zone of spring frost or unexpected cold rain. Some also blame themselves, mistaking the signs of illness for a burn from an improperly selected insecticide. In fact, the cause of shoot death is the action of a harmful fungus from the Monilia family..

What is Monilial Cherry Burn? 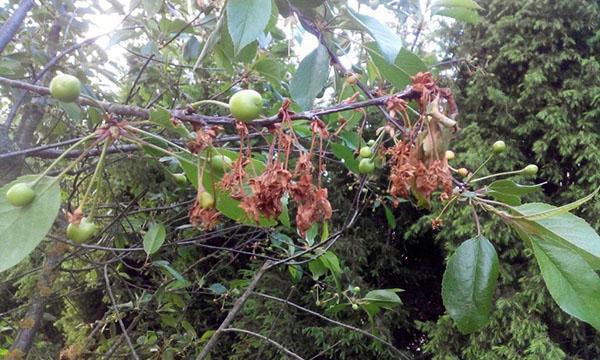 Various subspecies of this parasite live on apple and pear trees, quinces, peaches, apricots and plums. Stone fruits, including cherries, suffer the most. Cherry moniliosis, pictured, or gray fruit rot, is widespread today in many regions in temperate climates..

In Russia, gardens suffer from infection: 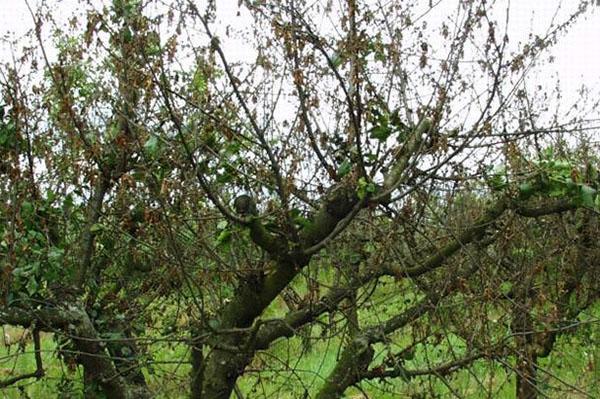 Cherry orchards in Ukraine and Belarus are infected with moniliosis. The problem has become almost ubiquitous. Cool weather and rains contribute to the spread of monilial cherry burn. When the air humidity is 95–100%, the optimum temperature for the development of the parasite is 15–20 ° C.

A protracted spring, accompanied by precipitation, provokes the appearance of the disease in those areas where previously massive manifestations of gray rot were not noted.

How does plant infection occur?? 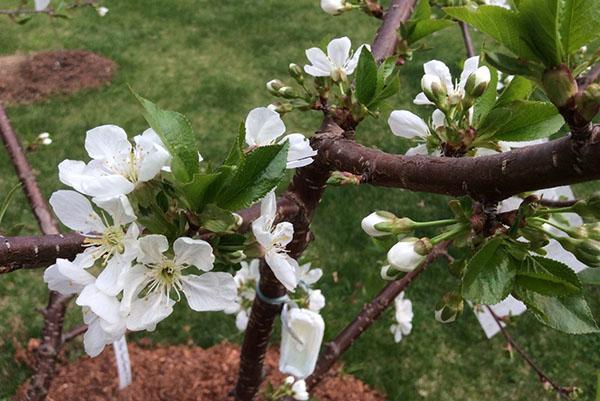 During flowering, conidia of the fungus penetrate into the flower through the pistil. Soon the mycelium is growing. The mycelium affects the peduncle and the wood of the shoots. As a result, instead of the kind of pouring berries, the gardener observes the rapid drying of young branches..

The resulting ovaries, leaves and shoots acquire a brown or brick-brown color. The berries are mummified and remain on the tree. If the affected parts of the plant are not removed in time, new spores of the fungus appear on them, and the infection is repeated. Even warming and the cessation of rains cannot stop the process of dispersal of the parasite. Although the external signs of the disease in this case are blurred or poorly noticeable, at the first opportunity, the pathogen of cherry moniliosis that has already entered the tissues, as in the photo, will manifest itself. 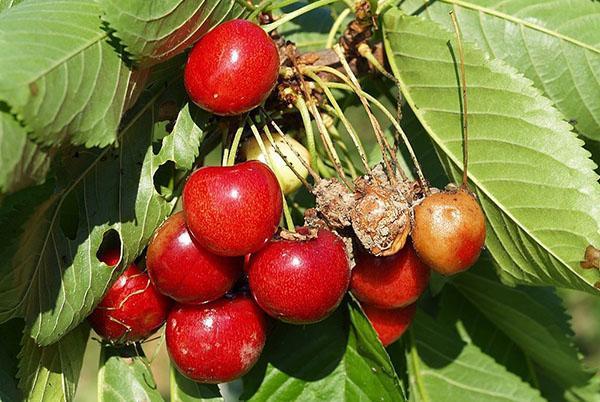 In favorable conditions, during the warm season, the parasitic fungus gives several generations and captures entire gardens. Spores wait out the winter on infected branches, dried foliage and unripe berries not harvested from trees. Their presence can be detected by grayish-brown spots on the bark, mummified fruits and leaves. With the arrival of spring, a new circle of infection occurs..

The spread of the infection is facilitated not only by wet weather, but also by insects that parasitize cherry flowers and ovaries. Not only do they violate the integrity of tissues and weaken fruit trees, pests, for example, cherry weevil, aphids or moths, transfer the fungus from already diseased parts of the plant to healthy ones. 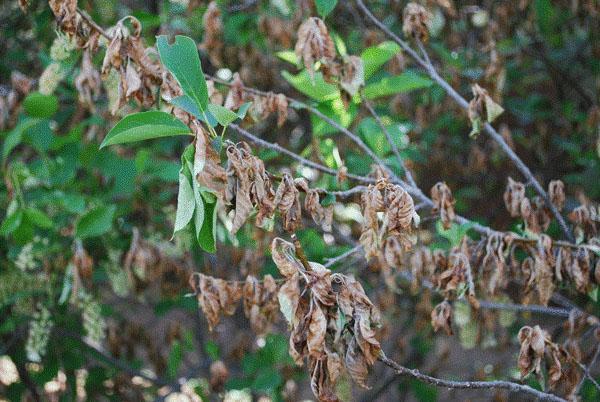 Along with coccomycosis, a monilial burn on stone fruits is considered one of the most destructive diseases. Already in the first year after infection, the gardener loses the lion’s share of the crop. It should be remembered that the treatment of cherry moniliosis with folk remedies is not carried out..

If urgent measures are not taken, the disease spreads with lightning speed through the crowns of closely growing trees and in several years can destroy vast, previously healthy and stably fruiting plantations..

How to cope with the disaster overtaking an increasing number of amateur and industrial farms? Are there medications for the disease and cherry varieties that are resistant to moniliosis??

How to treat cherry moniliosis?

Since the disease is behaving quite aggressively and in recent years has captured more and more territories, measures to combat cherry moniliosis should be comprehensive, regular and decisive. These include: 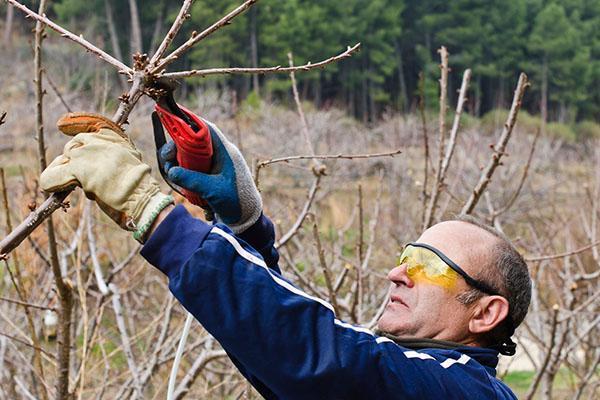 Before treating cherry moniliosis with copper-containing preparations or systemic fungicides, it is imperative to prune already dried shoots. If the weak branches affected by fungus, lichens or insects have not been removed in the fall, they are cut out in early spring before the buds open. Then the condition of the trees is checked after flowering. The first signs of damage are visible within 8-14 days after the flowers wilted. To prevent the spread of infection down healthy wood, the saw cut is carried out, capturing a couple of buds below the drying areas..

Foliage, ovaries and small shoots that have fallen under a tree are carefully collected and destroyed. The soil of the trunk circle is loosened.

A good preventive measure against the spread of monilial cherry burn is the regular formation of fruit trees. Removing branches, the growth of which leads to an excessive density of the crown, cutting out weak shoots reduces the risk of colonization of the crown by pests and fungi. Old, gradually weakening plantings especially need such pruning and rejuvenation..

All plant residues from diseased cherries, including branches, fruits mummified or rotted in summer, as well as foliage, must be burned.

If this is not done, the fungus will easily overwinter and with the wind, raindrops or with the help of insects will continue to spread and destroy the plantings.. 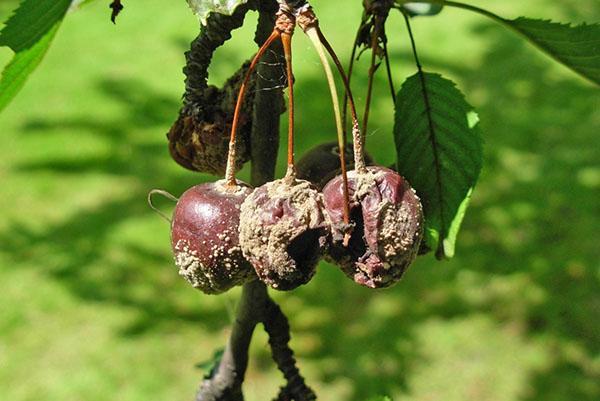 Pruning and adherence to agricultural techniques slows down the development of infection, but only with the help of such control measures, cherry moniliosis cannot be defeated. It is much more effective to combine them with a complex garden treatment with specialized antifungal drugs..

Against moniliosis, as against other fungal infections on plants, preparations containing copper compounds are traditionally used. They suppress the activity of the parasite and restore health to plants..

In addition, modern systemic fungicides are widespread today, acting against several microorganisms dangerous for fruit crops at once. Both preventive and therapeutic measures imply several treatments per season..

How to treat moniliosis on cherries affected by the disease last season? To destroy the causative agent of moniliosis, spraying is carried out in the spring, before the buds open and in the fall, after the completion of the leaf fall, when all the fallen leaves are pruned and destroyed..

For prophylactic purposes, spraying is carried out: 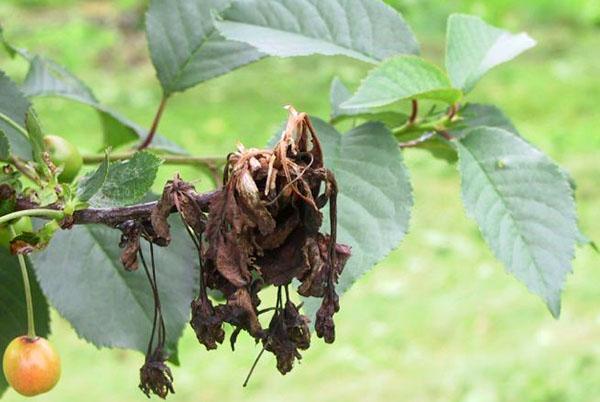 Today gardeners have a lot of effective fungicides at their disposal, but it must be remembered that fungi are able to adapt to a particular composition. Therefore, it is better to change the preparations, and together with them in the summer use insecticides against insect pests that contribute to the spread of infection to neighboring trees and fruit bushes.

One of the most effective measures to combat cherry moniliosis is the correct selection of varieties for planting..

First of all, you should choose plants that are well adapted to the climatic characteristics of the region. And although the breeders have not been able to breed varieties and hybrids of cherries that are not at all susceptible to a dangerous disease, there are varieties that better cope with the misfortune than others..

With a competent approach to agricultural technology, preventive treatment and constant attention to the state of plantings, even in areas of massive infection with moniliosis, you can get consistently good yields and not worry about the health of the culture beloved by many.

Video about moniliosis and the means to combat it