How to grow watermelons outdoors? 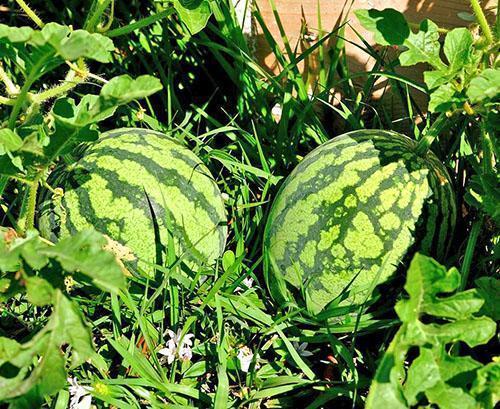 Juicy sweet watermelons are always associated with summer and sun. The crackle of the striped peel under the edge of the knife, the characteristic aroma and the melting, refreshing pulp. What could be better than, forgetting about business for a while, enjoy a slice of ripe berries. Today, you can pamper yourself with watermelon at almost any time of the year. Supermarkets always have these giant berries, however, grown on the other side of the world or in a greenhouse..

The most delicious watermelon is the one that was saturated with the power of the sun and grew not under the film, but in the garden.

Many gardeners are wondering how to grow watermelons in the country? As of today, there are all the conditions for this. Thanks to the appearance of early varieties and hybrids, even residents of the Non-Black Earth Region can break their own melons and get a harvest of watermelons. How to grow watermelons outdoors? What kind of care does the culture require, and when can the first fruits be harvested?? 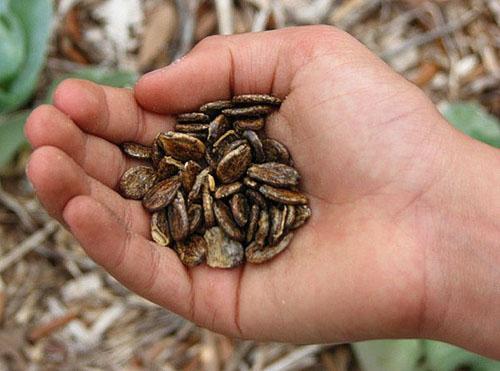 Of all the melons and gourds, watermelons have the most difficult seeds to germinate. In order for the seedlings to be friendly and strong, the seeds are first immersed in salt water. This will allow to identify and remove not viable, light specimens, but those that are heavier and sunk to the bottom can be used for sowing.

However, this is not enough. Shortly before planting, the seeds are heated for 3-4 hours at temperatures up to 55 ° C or left in the sun for a week in order to disinfect the seed in this way. Then the seeds are soaked in warm water for a day, which will accelerate germination and give the sprouts additional strength..

In the Black Earth Region and southern regions, where watermelons are grown in summer cottages and industrial melons, the culture can be planted in open ground with seeds.. 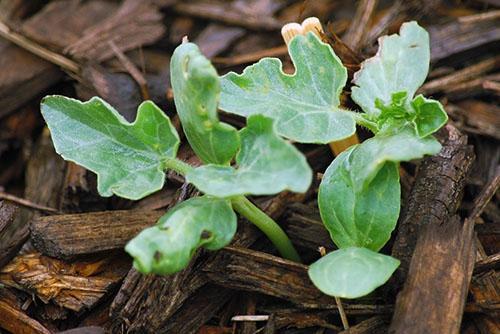 The best time for this is when the soil at a depth of 10 cm warms up to 12-15 ° C. For sandy and other types of light loose soils, the seeding depth of watermelon seeds is 4–8 centimeters, but if the soil is heavy, dense, it is more correct to deepen the seeds by no more than 4–6 cm. And the smaller the seeds, the smaller the grooves for planting them are made..

Melon crops, especially during the ripening period, require good nutrition, which is provided by the main root system and small roots formed on separate lashes. Therefore, when growing watermelons in open ground, a rather large area is allocated for planting, the size of which depends both on the type of soil and on the variety, as well as on the expected load on the plant..

The main thing is that as the planting grows, it does not turn out to be excessively thickened, and all the berries that have set up have enough light, moisture and nutrition. 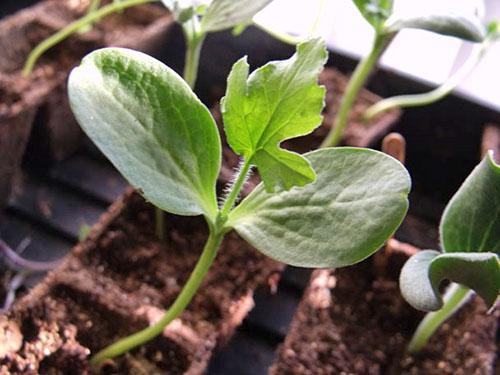 In the conditions of the middle zone, for example, in non-chernozem areas, as well as during a cold, protracted spring in the southern regions, it is possible to grow watermelons in the open field through seedlings. From the moment of sowing to transplanting young plants into the ground, it usually takes from 25 to 35 days. It is most convenient for sowing to use peat pots with a diameter of about 10 cm, which are filled with a mixture of equal amounts:

The seeds are buried into moist soil by 3-4 centimeters, after which the pots are left under a film until germination at a temperature of at least 20-25 ° C, only at night the temperature background can drop to 18 ° C.

When sprouts appear above the ground level, the seedlings are transferred to a cooler room. At a temperature of about 17-18 ° C, watermelon seedlings will have to stay for 3 to 4 days, which will allow you to get strong sprouts and prevent them from stretching. In the future, the temperature of about 22-25 ° C is returned again during the daytime..

Regular watering is carried out with warm water, trying not to get on the leaf plates. A week after sprouting the sprouts, the seedlings under the roots are fed with a fertilizer containing nitrogen and phosphorus.

Since melons are warm and light-loving crops, well-lit warm rooms or greenhouses are chosen for young watermelon plants, but a week before the seedlings get into the open ground, they must be hardened. To do this, the seedling boxes are exposed to the open air, first for 2–4 hours, then the time is gradually increased. In early June or at the end of May, watermelon seedlings are planted in the beds.

Choosing a site and soil for growing watermelon in the country 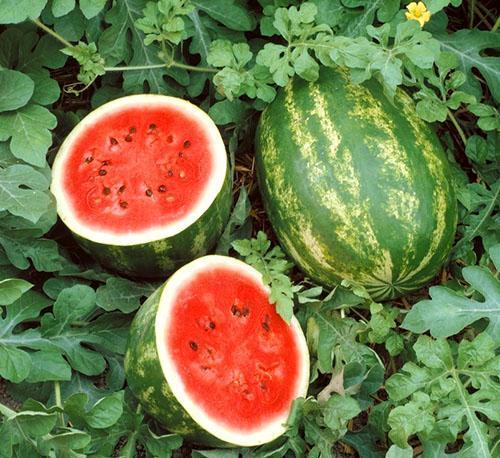 To get a good harvest from a watermelon grown in the country, it is important that the site intended for planting:

The best soil for melons and gourds is light, fertile and loose. It is optimal if sandy and sandy loam soil on summer cottages, enriched with humus or other well-rotted organic matter since autumn.

The best precursors for watermelons are legumes, crucifers, including cabbage and radish, as well as potatoes and tomatoes..

Before growing watermelons outdoors, care should be taken to prepare the ridges and fertilize the soil. Per meter of the garden bed in the spring they bring: 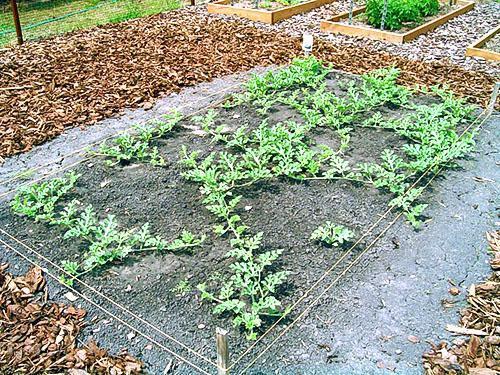 1-2 plants are planted in pre-moistened wells, located at intervals of 1-1.5 meters, or one peat cup is immersed so that cotyledon leaves remain above the soil level. After planting, the garden bed is mulched with sand, and the plants are sheltered from the sun. They act in a similar way when seedlings appear, if watermelons are grown in open ground from seeds..

In the first week, while the acclimatization process is in progress, watermelons are watered with warm water..

Features of watering and feeding watermelons 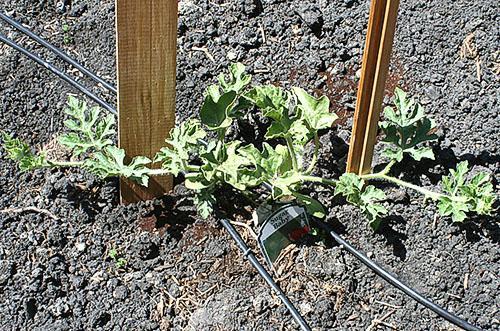 It is impossible to grow a watermelon in the country without providing the plant with proper watering and feeding. Without water, it is difficult to talk about the juiciness of sweet berries, but you do not need to overdo it here, otherwise you will not achieve such a beloved sugar pulp. Before the flowers appear, watermelons are watered sparingly, and when an ovary appears on the lashes, more generously.

At a summer cottage for watermelons, it is convenient to use drip irrigation systems, with which you can also carry out regular feeding of plants.

When growing watermelons in the country, you need to remember that the culture loves rare, but abundant watering, which is extremely necessary in the hot season, in conditions of a shortage of natural moisture. A comfortable soil moisture level for watermelons is 85%. On sandy soil that does not retain moisture well, the beds are watered more often, and less often on chernozem and clay soils. When the berries are poured and they begin to ripen, watering is carried out less often, and then completely stops.

The feeding schedule for watermelons grown in the country includes three procedures, during each of which approximately 2 liters of liquid fertilizers should be per plant. A week after planting in the ground, watermelons are watered with a solution of 10 liters of water: 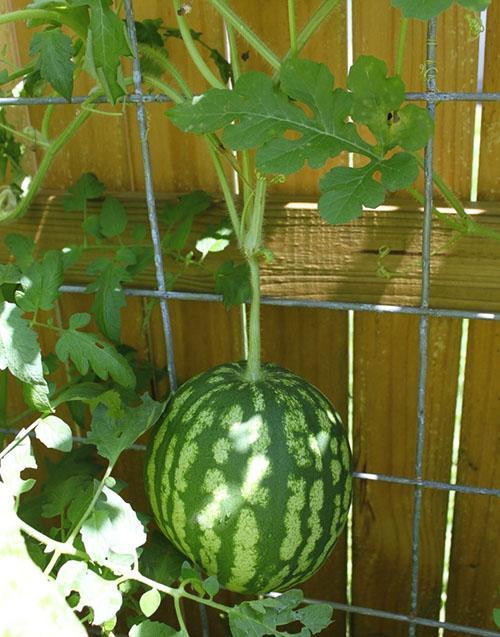 When active growth of lashes begins on the plants, the watermelons should receive a second feeding with half the concentration of phosphorus and potassium fertilizers. With the beginning of the formation of the ovaries, one more top dressing is carried out, introducing a solution based on the watermelons growing in the country:

The nutrient mixture is introduced into furrows arranged in advance at a distance of 15–20 cm from the bushes..

A decrease in the proportion of nitrogen fertilizers is associated with the possibility of accumulation of nitrates in the pulp of berries. Also, this measure will push the plants not to gain green mass, but to ripen..

Caring for watermelons grown in the country 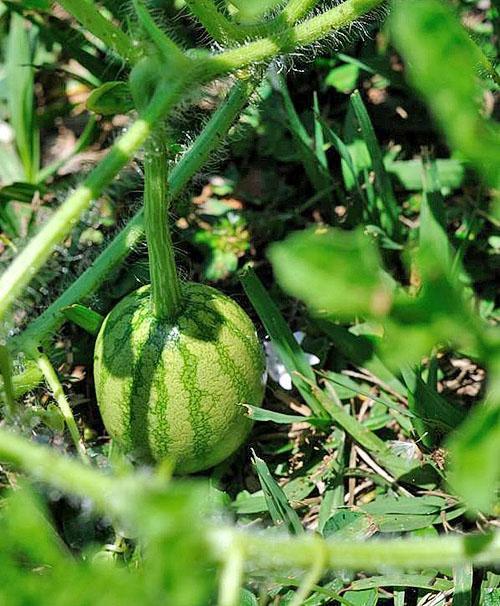 Caring for watermelons growing in the open field consists of:

The soil under the plants is loosened to a depth of 7 cm, not only after planting, but also after watering and rains, until the lashes and foliage cover the spaces between individual bushes.

To protect the ovaries and shoots from the wind, it is useful to fix the lashes to the ground using wire pins or sprinkling the stems with moist soil..

If in the area where watermelons grow, there is a risk of moisture stagnation or not enough light, trellises are built for the plants and, at the beginning of the growth of the lashes, the shoots are transferred from the ground to strong vertical supports. The same technique is useful if there is not enough space in the country for growing watermelons using the traditional melon method. As the shoots grow, they are spread over the trellis or laid out on the ground so that one whip does not obscure the other.. 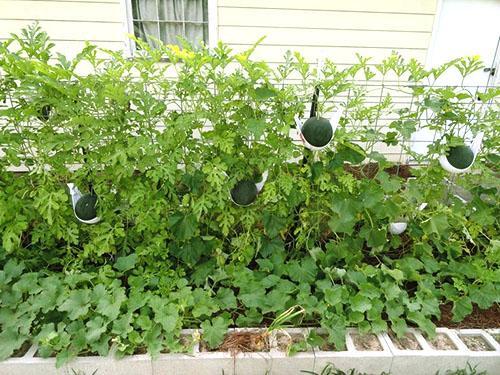 If a watermelon is grown on a trellis in the country, it is recommended to leave only one main whip, on which, after flowering, depending on the variety and climate, from 3 to 6 fruits should be tied. The rest of the shoots are pinched in the early stages of growth, and then, when the ovaries reach the size of a five-ruble coin, the top of the fruiting stem is removed. 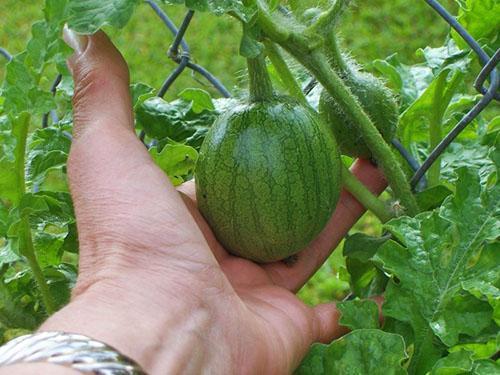 When growing watermelons in the open field using the melon method, pinch all the shoots after 3-6 ovaries, remove the stems that appear from the leaf axils and female flowers.

It is interesting that the trimmed side lashes can be rooted and also obtained from them, albeit a late and small, but high-quality harvest..

If there is a threat of frost in the area where watermelons grow, the plants are protected with cardboard or special covering material..

When to collect watermelons? 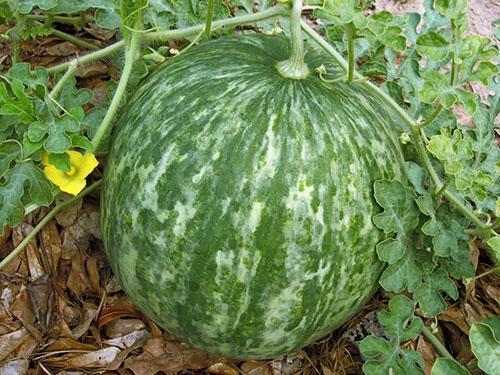 Ripening tomatoes are easily recognizable by their discoloration. With cucumbers and zucchini – the main thing is not to linger with the collection, so that the vegetables do not lose their juiciness and useful properties. And when to collect watermelons, how to distinguish a ripe berry from one that still needs to warm the sides in the sun?

The earliest ripening varieties of watermelons in the central part of Russia can only yield a harvest by mid-August. At the same time, mass harvesting at the summer cottage is not carried out, except for cases when the berries on the melon are threatened with frost. While the warm season lasts, the ripe watermelons are cut from the lashes:

All these signs of ripeness must be considered in aggregate and only then are watermelons harvested, otherwise it is possible that the cut berry will turn out to be unripe.

However, when watermelons are used for storage or transportation, it is best to take the berries a few days before they are fully ripe. Such watermelons, being in a dry warm room, can ripen without losing any useful properties, or taste and aroma. But only watermelons harvested in a fully ripe state are suitable for obtaining seeds..