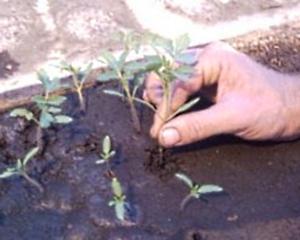 Each owner of a garden or personal plot has a desire to grow seedlings on their own, adhering to effective agrotechnical recommendations in observing all the appropriate conditions and norms for growing strong shoots in order to harvest a high yield in the future.

The process of ensuring the effective growth of seedlings at home and greenhouse conditions is quite laborious if you use a continuous option of sowing seeds.

Most gardeners choose this method due to its ease of implementation at the initial stage, requiring only a certain form in which the sowing is carried out, often a wooden box. Thus, there is no need to check the germination of these for one hundred percent, as with individual sowing of seeds in separate trays or forms..

Continuous sowing can be carried out in two ways – row or continuous field, having previously prepared a special soil, fertilizing it with all the necessary macro- and micro-elements in order to create a favorable environment for the germination of seed.

Read also the article: how to correctly pinch tomatoes on the street?

Both methods are not perfect and require subsequent picking of seedlings..

Picking is the planting of seedlings that have formed the first foliage into a wider space, giving preference to the individualization of each germinated shoot.

What is the purpose of plant picking?

This process is necessary in order to carry out the culling of too weak shoots and to provide an opportunity for the strong to fully develop their root system, counting on the correct vegetative formation of the stem, leaves, inflorescences and obtaining high yields in the future..

A vivid example of a seedling after a pick and without its implementation speaks for itself.

The dive of seedlings is carried out at the age of two to three weeks..

The second diving process occurs at the seedling age of twelve weeks, if necessary in order to increase the space for root development..

Shoots can be transplanted into a wide variety of shapes and pots of varying depths to provide sufficient space for seedling roots to grow. The most common containers for the first stage of the dive are peat sectional molds and cups, plastic molds, plastic cups and even modern tetra-pack bags from juice and milk..

Each gardener decides which of the possible container options to give preference independently, based on the quality characteristics and the possibility of repeated use of these.

How to dive seedlings correctly?

In order for the picking process to bring the expected results, it is necessary to carry out all the work with jewelry carefully so as not to damage the first formed roots.

For this purpose, with a special wooden stick, each shoot is carefully removed from the general sowing together with the soil and transplanted into a previously prepared hole in the soil, so that the root system is freely located without any bending of the still very weak root processes.

Before starting the dive, the common tray with seedlings is watered in order to facilitate the parsing of seedlings into individual shoots, shoots are extracted, too long root formations are cut off, the plants are planted in a common form at a certain distance or in a separate container, after which they are watered and exposed in a warm and light a place for further development and rooting.

Pros and cons of picking seedlings

The positive factors of picking are the following points:

The negative characteristics of the pick include:

Peppers and tomatoes are vegetable crops that tolerate picking very well and take root very quickly and subsequently delight with their endurance and yields..

The frequency of picking tomato seedlings depends on the variety of tomatoes – tall ones dive twice, while undersized ones – once. In order for the plant to develop a fibrous root system, the main root is shortened by one third with scissors..

After planting in the form, the seedlings should not be exposed to temperature extremes and too abundant watering, which threatens with root rot and complete wilting of leaves.

Planting dived tomato seedlings in the ground should be carried out before the appearance of inflorescences, due to the better adaptation of plants to external natural and climatic factors, after hardening and the formation of a full-fledged root system in the soil, the plant is ready to give all its strength to the formation of large fruits.

Pepper seedlings are picked in the same way as tomato seedlings. The only difference is the performance of a pepper pick after the third leaf appears on the shoots, and tomatoes – after the first two leaves appear.

The most important point in picking absolutely all vegetable crops is to preserve the integrity of the first formed roots, if they are damaged, the plant may not survive or eventually develop into a weak low-yielding plant.

Read also the article about sowing pepper for seedlings!

Video about the mandatory picking of seedlings