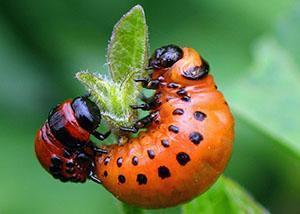 Pests annually cause serious damage both to summer cottage plantations of potatoes and to the fields of farms. As a result of such damage, not only the aerial parts of plants and their roots are affected, but also the yield is sharply reduced. Adult insects and larvae wintering in the soil, tubers and plant debris become a kind of delayed threat to the gardener. In order for the yields to be consistently high and of high quality, a system of measures is needed to combat the pests of potato tops and tubers existing on the territory. Read our next article: potato diseases – photo, description and treatment! 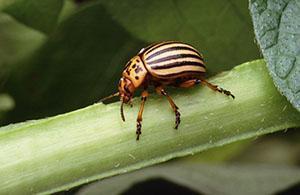 Yellow-brown beetles, which are about a centimeter long and stand out in longitudinal stripes on chitin, are well known to potato growers and represent the main danger in many regions of the country. Adults, especially larvae, can completely destroy moldings and young stems. If, when this pest of potatoes appears, the fight is not carried out, the yield may be halved..

Insects inflict the greatest harm at the time of tuber formation, when buds and flowers appear on the bushes. Knowing about the existence of effective chemicals, such as Taboo for processing potatoes, many summer residents still do not give up folk methods of fighting the Colorado potato beetle and wireworm. Among these measures:

Effective protection against pests will be three times treatment of plantings by the Commander, Iskra, Mospilan, Aktara or other drugs..

The main thing is that no chemicals are used 20 days before the harvest..

Biological remedies, for example, Boverin, Fitoverm and Agrovertin, show their effect within 5-7 days and are especially effective against the main pests of potato tops, larvae. 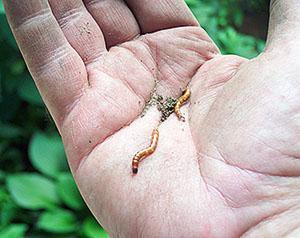 Tough, up to 3 cm long, yellow click beetle larvae feed on juicy underground shoots, roots and tubers. They are especially fond of wheatgrass, therefore, when these pests of potatoes are found, the fight against them should be started with the removal of this weed. Tubers affected by wireworm are dotted with holes, often affected by rot, nematodes and potato diseases.

You can protect the crop from a dangerous pest with the help of:

In addition, the drug is active against the Colorado potato beetle, aphids and leafhoppers. In this case, the protective properties remain up to 35 days.. 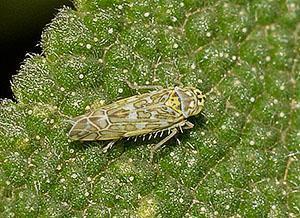 Outwardly similar to aphids or flea beetles, these pests of potato tops feed on plant juices and this cause serious damage to the plantings:

To protect seedlings from leafhoppers, it will be useful to use Kruiser and Tabu insecticides to treat potatoes even before they enter the soil. And with the help of Karate Zeon, you can destroy leafhoppers around potato plantings. 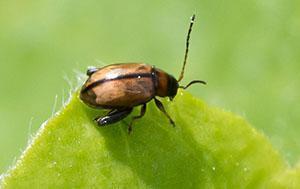 Various types of flea beetles are also common throughout the world. Adult beetles, up to 3 mm long, are pests of potato tops. And thin, with three pairs of legs, larvae developing on the roots, in years favorable for insects, can cause the loss of healthy bushes and most of the harvest. Late planting of tubers and dry, hot weather contributes to the defeat.

You can notice traces of potato flea beetles by the characteristic holes and pits on the surface of the leaves.. 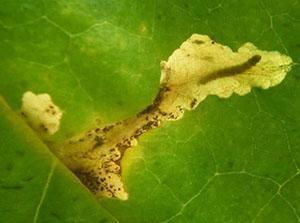 In addition to Taboo, phosphamide with a concentration of 0.2% can be used every 10 days as a means of protection and control of the pest of potatoes. Adults are caught with glue trap baits. And on small summer cottages, spraying with chamomile or tobacco dust mixed with wood ash is effective. 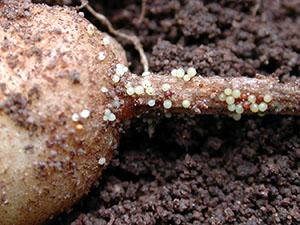 It is almost impossible to examine microscopic roundworms with your own eyes. But traces of the presence of the golden potato nematode in the photo and to the naked eye are clearly visible. These are millet-like grains of pest cysts that sprinkle the roots of an infected plant. In this form, the pest hibernates and can remain viable for at least 10 years. Bushes affected by nematodes are outwardly oppressed, lagging behind in growth. A characteristic sign of soil contamination by nematodes is the yellowing of the lower leaves on potato bushes. If such a plant is pulled out, you can notice the fibrous roots with small tubers. And sometimes potatoes do not form at all.. 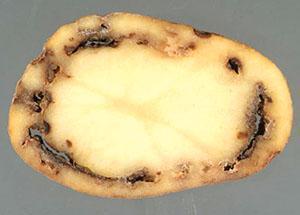 If the plantings are affected by the potato stem nematode, the signs of its presence on the tubers look like depressed gray spots that grow and crack over time. The tissue under the affected peel takes on a brown loose appearance, and clusters of the pests themselves are found on the border with healthy pulp.

Gall nematode, parasitizing on the underground part of potato bushes, including tubers, damages plants, and this eventually leads to their death. In the places of penetration of worms and in the areas of their vital activity, galls appear – thickenings up to 1.5 mm in diameter. These growths, left on the roots and tubers by a pest of potatoes, from the photo you can see how they gradually grow, merge and lead to deformation of the tubers and plant organs. And bacteria and fungi easily settle in damaged tissue.. 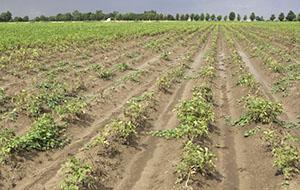 Nematodes are easily transferred to the soil with planting material and soil. Gardening tools, shoes, and even water can become a source of contamination. Therefore, before planting, it is recommended to wash the tubers with a brush under running water, and after digging the bushes affected by the pest, carefully transfer them from the ridges and burn them. If there are gall, stem or golden nematodes in the soil, the area of ​​distribution of pests is clearly visible in the photo of the site.

To avoid damage to tubers by worms, planting is carried out as early as possible, and preference is given to the earliest varieties, the ripening of which is less than 60 days – the development cycle of nematodes. 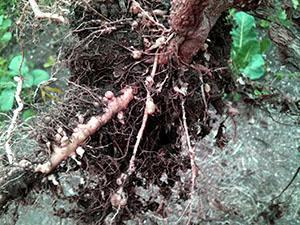 Protection against and control of potato pests, in the case of nematodes, consists of: 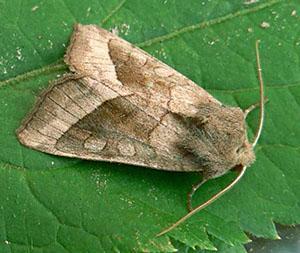 Innocuous-looking brown or gray moths are serious pests of potatoes, and the fight against them, or rather their caterpillars, should be carried out only in a comprehensive manner. These insects are unpretentious and are found everywhere, but they take root especially well in shaded corners with high humidity. Scoop eggs, often hibernating on wheatgrass, turn into larvae in the spring and move on to potatoes and other nightshade. 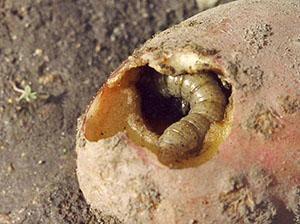 It is clearly seen how the pest of potatoes in the photo, gnawing the stem above the root collar, gets inside, and then penetrates into the nearby tubers and bushes, causing damage to many plants.

You can fight potato scoops: 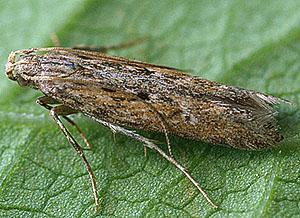 This insect, which looks like a potato scoop in the photo, develops not only in the summer months. It is also active in storage conditions at temperatures above 10 ° C. During the warm season, the potato moth can give up to eight generations, and if the adults do not seriously harm the crop, then the caterpillars damage both the tubers and the green part of the bush.. 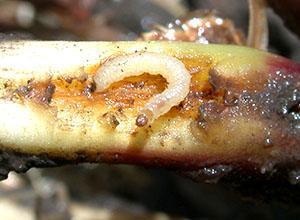 In places where signs of a potato pest are found, it is necessary:

Treatment of excavated tubers with lepidocide prevents the development of pests. Treating potato moths in the beds with chemicals similar to those used to combat the Colorado potato beetle and other pests of potato tops. Treatment for potato moth and scoop can be repeated at the end of August. This will prevent the caterpillars from descending to the roots..

If the goal of the gardener is a high yield of high-quality tubers, the prevention of the reproduction of potato pests and the fight against them should be mandatory complex measures on the site.

And here one cannot do without systematic monitoring of the state of plants, as well as without creating favorable conditions for the growth of potatoes on the plantation..