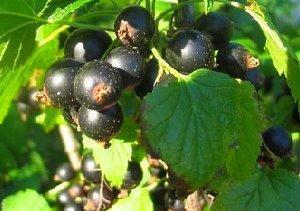 Black currant is one of the most famous and favorite berries of most people. Possessing excellent taste, it is also extremely beneficial for the body. Berries have one of the highest vitamin C levels known to contain this vitamin. These berries are used during colds, intestinal diseases, for general prevention of the body. In addition, jams, compotes, jellies and currant jams are the favorite dishes of many people. Everyone knows about its beneficial properties, but not everyone knows when and how to plant it..

Optimal conditions for planting all types of currants – autumn.

The choice of the landing site should also be approached responsibly. This plant is moisture-loving, so moist areas are suitable for it, but at the same time it is well protected from drafts. Planting currants in the fall is not allowed in swampy areas.

The best option is medium and heavy loamy soils. Currants are afraid of stagnant water, so good soil drainage should be installed.

How to properly plant black currants in the fall 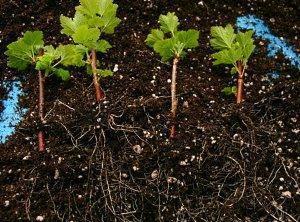 Many, having planted a black currant bush, immediately forget about it, and remember only during the harvest. And, in vain. To get a good full harvest, you need to follow simple rules..

The area set aside for planting currants is leveled, all the depressions are filled up. Further, a spacious hole is dug – 40 cm deep and 60 cm in diameter. The bottom of the hole is covered with a bucket of humus and potash fertilizers are added at least 100 g in the form of charcoal.

There is one trick that is used by gardeners and which is the main rule when planting black currants..

The bush is planted at an inclination of 45o to the ground level so that the stems are fan-shaped and the lower buds on them are covered with earth. At least 2 buds must remain on the surface.

This should be done to form a strong, healthy black currant bush.. 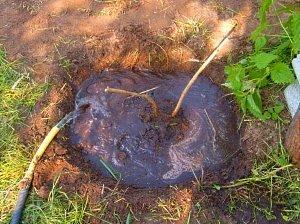 Next, you should make recesses around the planted bush, pour them with a bucket of water, tamp well and lay the mulch around the bush in the form of peat, compost, straw, leaves in a layer of up to 10 cm.Depending on the size and variety of currants, the distance between the bushes is observed from a meter to one and a half.

Currant loves lighted, open spaces, but partial shading will not harm it, although this will affect the harvest in the future..

Currant has a high frost resistance, but still it should be protected from late spring frosts, since fruit buds that have started to grow can freeze, which will affect a decrease in yield.

Let us summarize the rules that should be followed when planting black currants:

Having planted a currant bush, you want the results of your work to please for many years. Therefore, she needs good care at an early stage of development.. 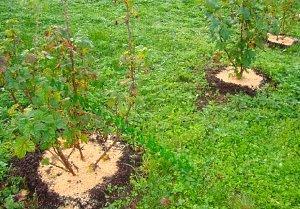 Until the bush bears fruit, it is enough to water, weed and huddle it. In the year of fruiting, it is already required to feed in the form of mineral fertilizers (100 g of superphosphate, 20 g of potassium sulfate and 30 g of urea) and organic fertilizers in the form of chicken manure and manure.

1 kg of manure is insisted for three days in a bucket of water, this mixture is diluted with another bucket of water and poured under the root. All the same is done with chicken droppings, only the water consumption is doubled.

In order not to lose the harvest during the spring frosts, during the flowering and budding period, the bushes must be well shed with water and covered. If you are not too lazy and do everything on time, the harvest is guaranteed..

Without fail, currants are watered during the period of ovary formation and fruit pouring, in order to avoid crushing them, especially if this coincided with a drought. After harvesting, continue watering. And in dry autumn, before the onset of frost, winter watering is done, 3 buckets per bush.

Does black currant need pruning? Pruning aims at shaping the bush, preventing thickening and improving the quality of the next crop.

Black currant has been growing in one place for 15 years. And high-quality and correct pruning contributes to the extension of fruiting for several more years. Such pruning consists in the fact that after three years only 6-8 shoots are left on the bush, from which even more powerful stems and even larger berries will grow.

All branches that give little growth and that are older than three years are pruned to zero. Older shoots are easy to distinguish – they are darker in color.

Cut out diseased shoots and stems growing in the ground.

Sanitary pruning is done during flowering, those branches that are sick with terry.

If a black spot is visible on the cut, these are pest larvae. Such a branch is urgently cut out to a healthy part. All branches affected by larvae are burned.

The plant is pruned mainly in late autumn. Old shoots are removed near the ground, leaving 3 cm stumps to stimulate the growth of the most productive underground buds. 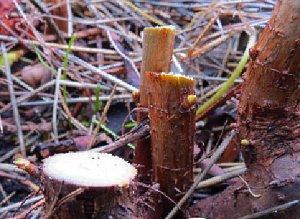 It is not recommended to prune in the spring, during the growing season, since through the sections the plant loses a large amount of juice and, along with it, nutrients.

It is recommended to process all cuts with garden varnish, since currants cannot overgrow the cuts on their own..